For most, the northern lights are something only seen in mesmerizing photos. A natural phenomenon that seems almost impossible to witness in real life. Catching the vibrant colors of the northern lights is more possible than you might realize. Wisconsin is known to be home to some of the best places to catch the spectacular light show. 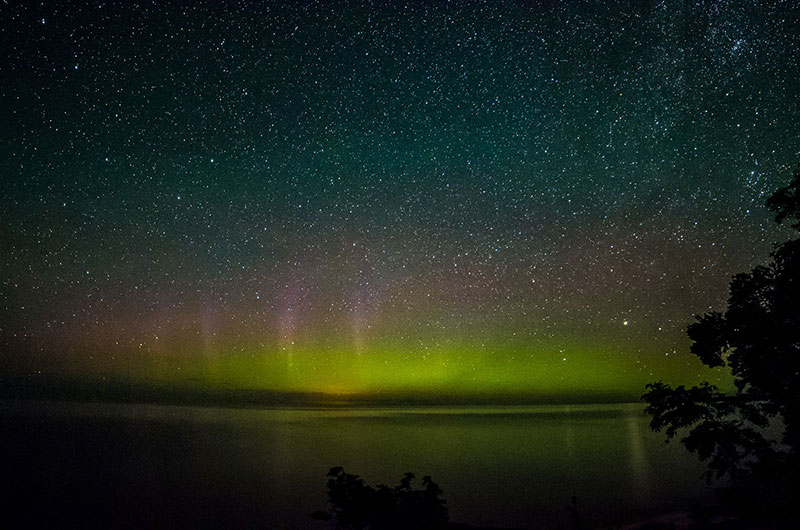 There are locations in Wisconsin, all unique in their landscapes and backdrops, where you can get the northern light viewing experience of your dreams.

The Apostle Islands National Lakeshore is a group of 22 islands within a 69,372-acre area on the northern tip of Wisconsin on the shore of Lake Superior. It is one of the top destinations for the avid adventurer and thrill seeker.

It is also on the list of the top 12 places in the US to catch the northern lights.

The northern lights occur when the atmospheric conditions are just right. What does that mean? It means, when the electrically charged particles from the sun collide with the gases from the Earth’s atmosphere, with a simultaneously clear, non-light polluted sky, the vibrant colors appear.

The Apostle Islands are on the top 12 places to catch the northern lights.

Depending on the altitude these collisions take place, will dictate which colors will be produced.

The color of the Northern Lights varies depending on two factors: which of those two atoms is hit and at what altitude that occurs.

The Chequamegon-Nicolet National forest takes up 1,539,647 acres in northern Wisconsin. As you can imagine, the vast area offers the solitude and non light-polluted area conducive for the northern lights.

Knowing the best areas to see the northern lights are in the northeastern part of the state, the vast amount of land the national forest offers is ideal. There must be enough geomagnetic activity to trigger the natural phenomenon. There are websites specially designed for those aurora chasers to check the solar and geomagnetic activity. A couple of those websites are Space Weather and NOAA. There is something known as the K-Index, where the fate of being able to see the northern lights lies.

“The K-index quantifies disturbances in the horizontal component of earth’s magnetic field with an integer in the range 0–9 with 1 being calm and 5 or more indicating a geomagnetic storm. It is derived from the maximum fluctuations of horizontal components observed on a magnetometer during a three-hour interval.“ source

The KP needs to be more than 5 to see anything in Wisconsin.

Bay Bluff Park in Door County Wisconsin is said to be one of the best places to catch one of nature’s greatest shows. The location is perfect as it is ways away from any major metropolitan area that could pollute the skies. The area prides itself on being able to see the vivid stars and clear constellations, even the Milky Way.

Big bay state park is on Madeline Island, which is the largest of the 22 Apostle Islands. The island is 2,350 acres that encompass landscapes from sandstone bluffs and caves to sand beaches. The park has been a favorite to view the northern lights with the best times to view being between midnight and 3 am.

Big Bay is distinctively known as being run on its own and being a protected area. The only way the island can be reached is by ferry, charter, or a private boat, which keeps the areas as natural and untouched as possible. All the better for viewing the big show.

The islands are all located on Lake Superior, and Madeline Island can be reached by ferry, private boat, or charter from nearby Bayfield, WI, found on the mainland. The small town is the hub for tourism in the area

The fall and winter are the best times to plan an adventure to catch the light show with the nights being longer and darker. The coastal views and the dramatic cliffs make for a jaw-dropping backdrop to view nature’s most spectacular creations.

Lake Michigan is one of the five Great Lakes. By volume, it is the second-largest and by surface area, the third-largest, after Lake Superior.

As you can imagine, when the lights reflect off of the immense, calm waters, it creates a scene from a dream.

Lake Superior is said to be one of the best locations for observing northern lights in Wisconsin. When the lake freezes over, it invites the pure, clear skies and presents the most ideal viewing opportunities.

(Related: The 7 Best Places To See The Northern Lights In Montana)

Who said having your wildest dreams come true was easy? To be in the right place at the right time to view one of nature’s most wildly beautiful natural phenomena doesn’t come easily. This may be one of the very reasons it is beyond worth the adventure to catch the rare sight. Wisconsin is located in one of the prime northern viewing locations to make it possible. Catching the northern lights in Wisconsin is most likely to happen during the long, dark nights of the winter months. Keep in mind, there must be a proper solar activity, K-index, and clear skies with no light pollution to make the magic happen.

Related: 10 Best Places To See The Northern Lights In Alaska