This is an attraction you need a car to get to. It’s not because public transportation is limited. In fact, this place is a stone’s throw away from an airport. To fully reap the benefits of the Musical Road in California, however, you need to drive. It’s only an hour north of Los Angeles or a long 5.5 hour drive from San Francisco. Before you buckle up, we’ll tell you all about this melodious highway. 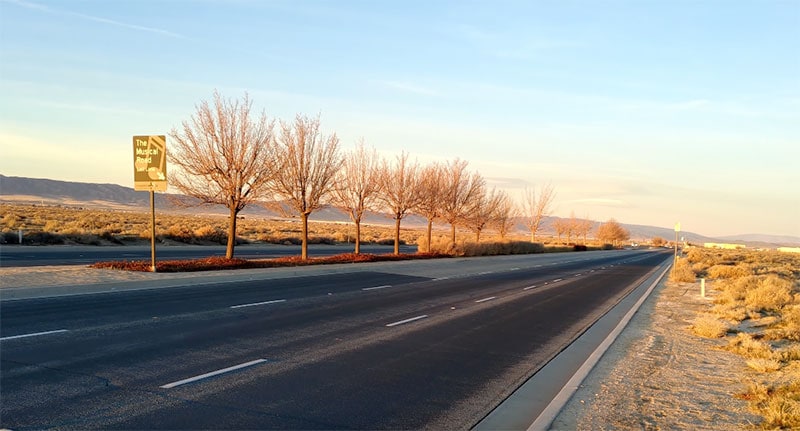 1. A musical road (of any kind, not just the one in California) is a road that’s newly paved in a special way so that when you drive over it, the road “plays” a song.

It’s based on the way your tires interact with the road and the speed at which you drive. No Bluetooth necessary.

The Musical Road we’re talking about is found in Lancaster, California. It’s situated on Avenue G in the north of the city by the airport, between 30th and 40th Streets. Its got its own little Place of Interest icon on Google Maps.

2. The origin of the Musical Road is, like many things in America, based in an advertising campaign.

Honda had the road paved for an ad. The commercial aired back in 2008 and the road has remained a popular attraction ever since, though it had been relocated. Local residents complained after a while about the distracting sound of cars constantly rolling down Avenue K, its original location. The first Musical Road was paved over (smoothly), but they built a newer though shorter one on the more remote Avenue G. Its new and current location is away from any been-there-done-that residents and has three lanes so there’s plenty of space for enjoying the music and getting to where you need to go.

This road was so popular that it brought international attention to Lancaster. It was featured in the Wall Street Journal, Wired Magazine, on the Discovery Channel, NBC News, and CNET nationally. The well-known British BBC show Top Gear even filmed part of an episode there.

3. The Musical Road works by the use of intermittent grooves paved into the otherwise smooth surface of the asphalt.

A bit like road braille which turns your tire’s passing into song. The grooves are spaced out at certain intervals that are mathematically calculated to play a vibrational tune! These calculations are done by dividing the speed limit of the road by the frequency of the note needed. Every musical note has a frequency in hertz. High notes are made by carving grooves closely together – more grooves, more frequency – and low notes are made by leaving wider spaces between the grooves. These measurements were made based on the notes of the chosen song, applied to a construction design that was then paved into the asphalt, and then tested to ensure accuracy.

The Musical Road in Lancaster sounds the same as the lumps and bumps paved into highways that warn you if you end up drifting lanes: a vibrational hum.

5. The ones in California were specifically paved so that if you drive at 55 mph (the speed limit), they sound like the classic William Tell Overture finale by Rossini.

6. Unfortunately, humans and nature are not perfect. Miscommunication made the grooves paved at the wrong distance from each other.

This error puts the song out of tune, even if you drive at the correct speed. Lancaster aren’t the only ones to mess this up. While some people have had success with musical roads, there are a fair few that don’t quite sound right. Another thing that ruins the experience is the fact that the road will wear down over time. Unless it’s kept up, the song will fade away as the asphalt wears away.

7. In New Mexico, a musical road on Route 66 just outside of Albuquerque was installed in 2014.

Their Musical Highway played America the Beautiful if you drove at 45 mph. This road was paved in an effort between the New Mexico Department of Transportation (NMDOT) and the National Geographic Society to slow down speeders and encourage them to enjoy the sound. Today, the road has worn out of tune considerably and there aren’t any road signs left to mark the spot. The NMDOT has no plans to revive the road.

Meanwhile, in Alabama, a fan of college football argues that this type of construction is an art form. He designed a musical road on South Donahue Drive on the Auburn University campus that plays the first seven bars of their fight song. Using the engineering degree he got from the university in question, he developed a new material that can be laid down on the road to give the musical effect without damaging the surface or requiring heavy construction.

Japan first realized the possibility of musical roads in 2007. Since that time they’ve paved over 30 different singing roads throughout the country. Across the sea from them, a couple musical roads were paved in Korea. Rather than meant to be tourist attractions, these were made with safety in mind. The singing stretch is meant to keep motorists staying alert and awake in an attempt to prevent accidents. China also has a couple. One in particular, near Yangma Dao, “plays” music on both sides of the road so that it doesn’t matter what direction you’re going in, you still get to enjoy.
There have also been others paved in Indonesia, Hungary, and the Netherlands. The first musical road believed to have been created was in Denmark where it was aptly named Asphaltophone.

It seems to us that if you want to create a musical road, you need to make sure you do it right. Check and double check your calculations. Or just bring in the guy from Alabama and have him invent a new method. Either way, they make for great tourist attractions here and abroad. While they seem gimmicky, musical roads can be seriously helpful, maintaining awareness of drivers and keeping them travelling safely.