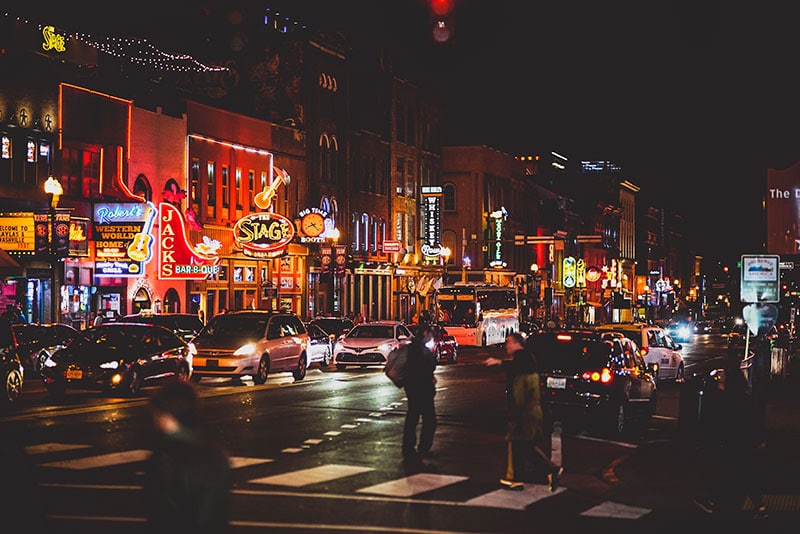 Nashville is a city known to be alive with culture. Its famous honkytonks and venues are common attractions for locals and tourists alike.

This state capital and music mecca is a popular destination for a reason and we think it’s worth a visit. You shouldn’t dive in blindly, though. Especially for first-time visitors, it’s important to do a bit of a research into your trip before you arrive. 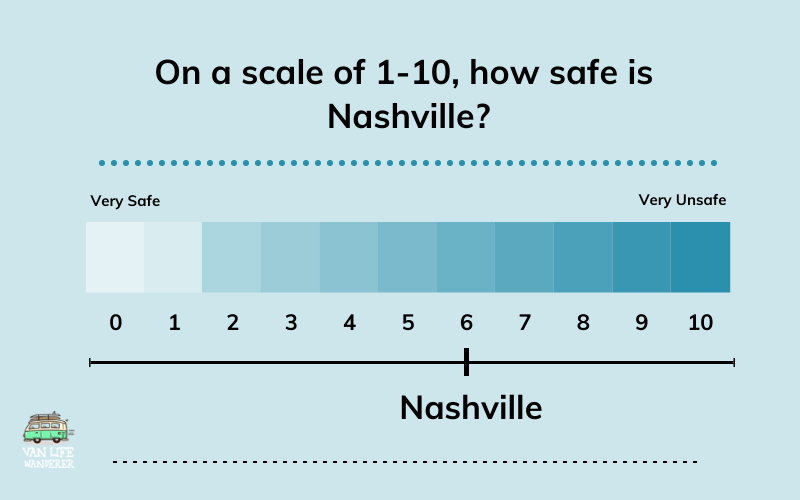 You can have a relatively safe visit as long as you stay in the learn the layout of the city, stay in the touristy areas and follow safety precautions.

Here’s a couple graphs to give you some perspective on Nashville’s violent crime rate: 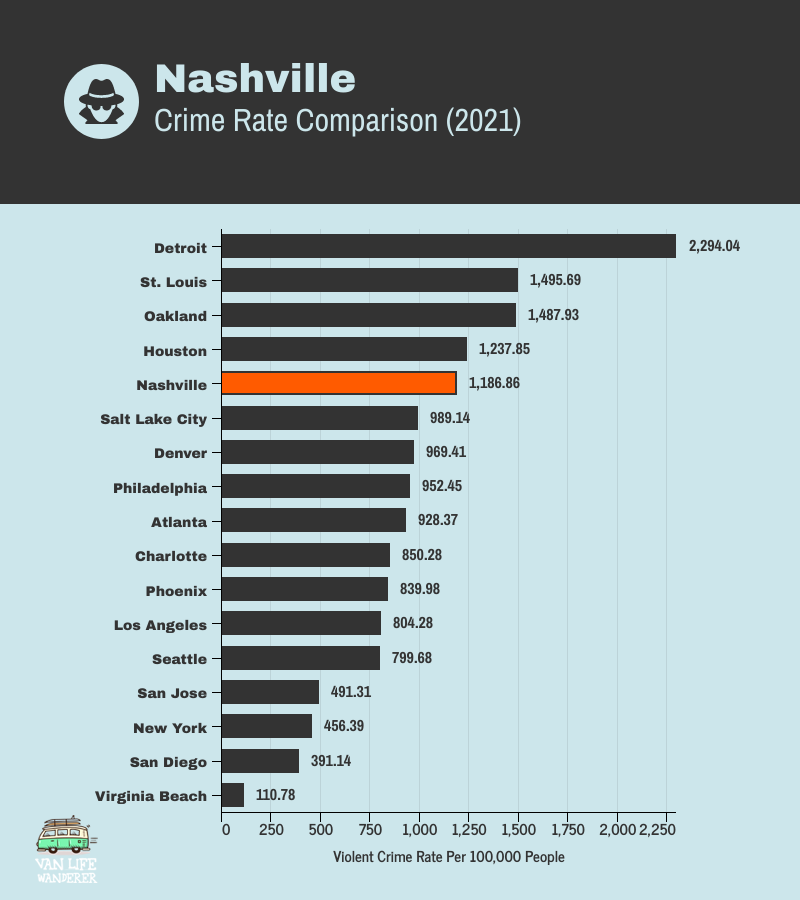 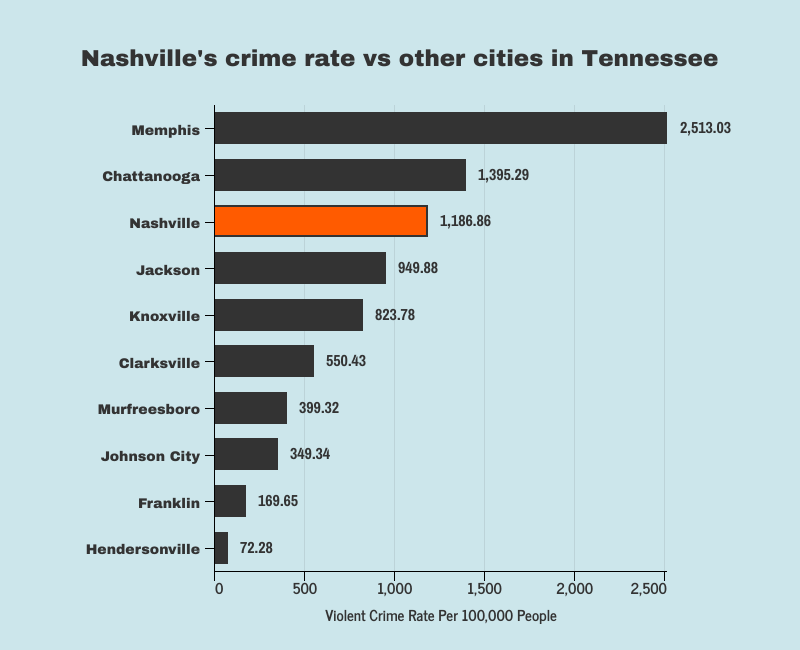 Here’s a graph showing you how violent crime has trended over the last 11 years in Nashville: 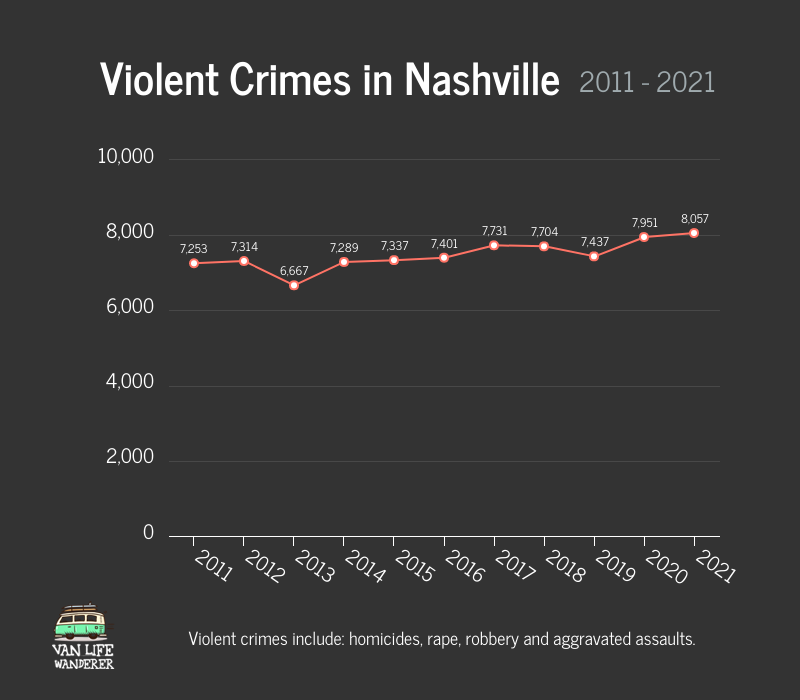 Here’s a graph showing you how murders has trended over the last 11 years in Nashville: 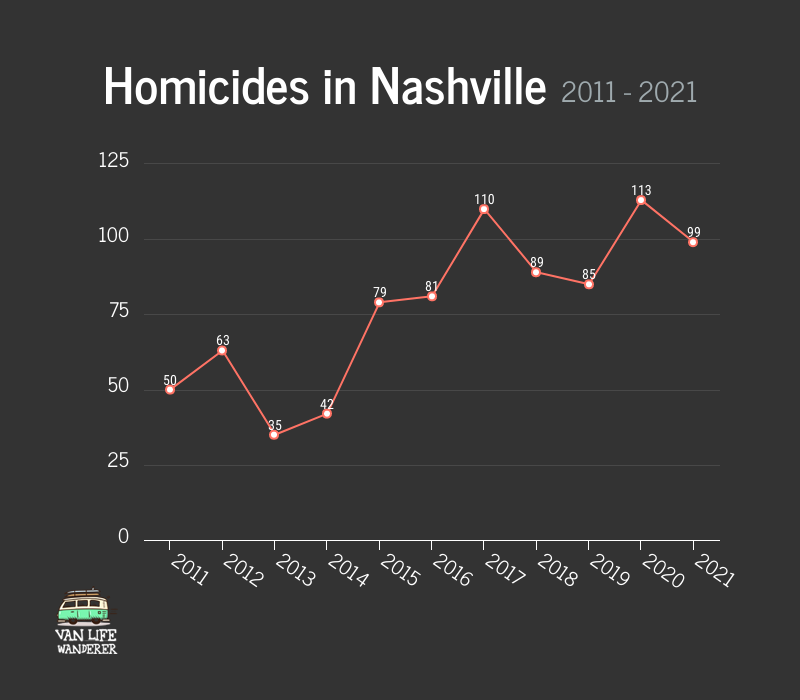 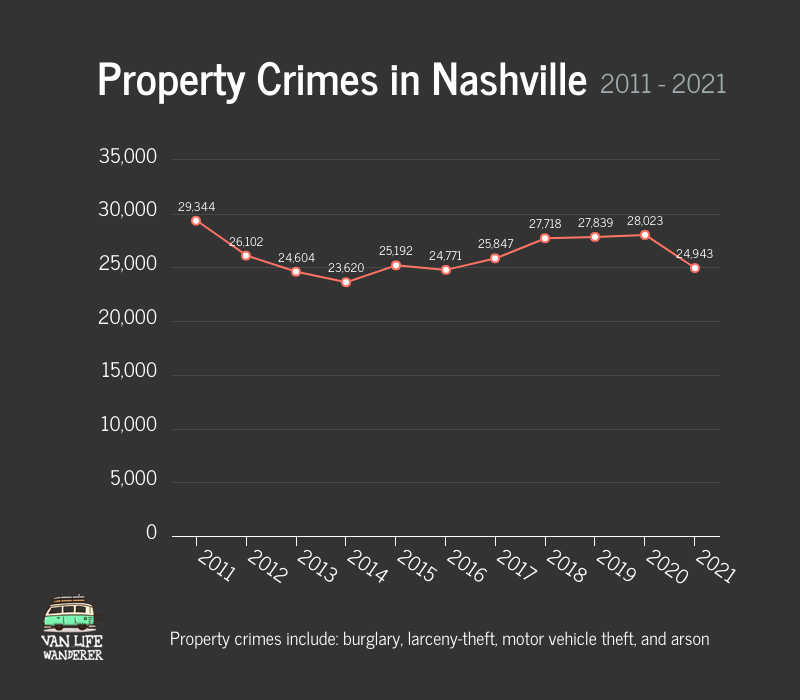 Nashville vs Most Dangerous Cities In The U.S.

Here’s a list of the most dangerous cities in the United States ranked by violent crime rates. 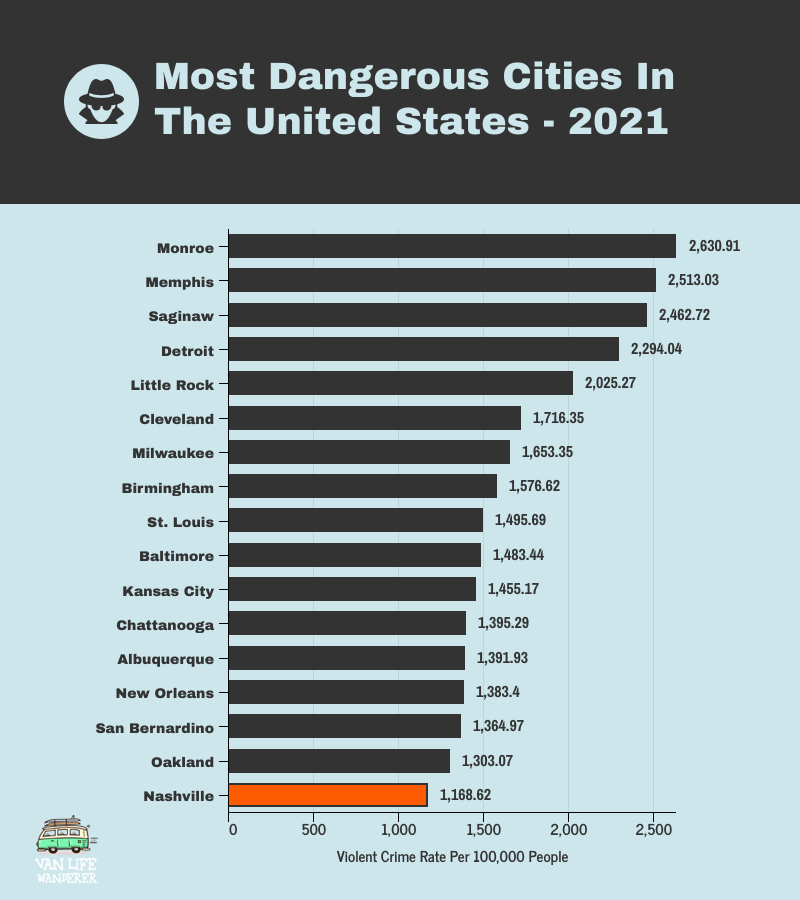 What’s the best way to avoid being a victim of wanton crime? Don’t go where it’s more likely to happen. As with all cities, there are certain neighborhoods in Nashville that would be best to avoid. They are:

While the dangerous neighborhoods are mostly west of the city center, the safest neighborhoods seem to be more central and towards the south. Within the center itself,

The “best” neighborhoods in Nashville include:

Is Nashville safe at night?

It’s recommended to avoid walking alone at night in the inner city. Always keep your wits about you. Don’t let the handful of Bushwackers you had convince you to take a shortcut. If you’re unfamiliar with the area, take well-lit, busy routes back to your accommodation. Another option is to plan ahead to be off the streets before it gets too late, but we do realize that cuts out half the fun Nashville has to offer. If you’re indulging in its late night scene, just be aware of your surroundings!

Is it safe for a solo traveler?

It’s always best, when exploring a new city, to do so with a friend. In any scenario you should be wary of strangers approaching you with questionable motives. Be sure to be smart about alcohol consumption so it doesn’t lead you astray at night. While making new friends is fun, be wary about people you meet in bars who want to take you somewhere else or try to come back to your place.

Because Nashville is so spread out, it’s likely you’ll rely on taxis or public transportation to get you around. While modern-day ride-hailing services record your trips through the app, allowing for a modicum of safety, taking a bus on a route you’re not familiar with can be dicey if you end up riding it into the wrong neighborhood. There’s safety in numbers and it also helps to have more than one person double checking directions to get you where you need to go.

Is it safe for women?

The unfortunate truth of being a woman is taking extra care in planning ahead, especially if you’re travelling alone and/or at night. The best bet is to travel along popular and well-lit areas; generally, the more touristy areas tend to be lively at all hours of the day. The more people around, the less likely it is that something alarming will happen.

While it’s true that the one steadily rising crime in Nashville is rape, one explanation for this rise is increased awareness and decreased stigmatization. The amount of offenses isn’t necessarily going up, but the amount of reports certainly are. Its possible that in the past, victims didn’t report such a crime, so the statistics don’t accurately reflect actual crimes committed. In Tennessee, mace is legal to carry. If you have to be travelling alone, it could provide that extra added protection that puts you at ease.

While it’s not ruled by anarchy and debauchery, Nashville can have a naughty reputation. Being known for good music and good bars can lead some visitors astray. As long as you remember that it isn’t Disney World, you can still have fun while staying safe. For the most part, statistics suggest that crime in Nashville is linked to residents. As a tourist you should have less to worry about over your short stay as long as you follow the basic safety tips of visiting a new city.

No one should have to travel with fear, and we’re not here to talk you out of making a trip. Any city in the world will have its ups and downs. If you’re travelling to Nashville and are unfamiliar with it, that’s okay! The beauty of travel is exploring new places. We just recommend caution before doing so. We only want to hear good things about your travels!