In western Los Angeles, a famous road runs for more miles than the length it spans from east to west. Mulholland Drive is a road 21 miles long, but it begins and ends only 16.9 miles apart.

The reason for this is because of the road’s precarious path, twisting and turning across the Santa Monica Mountains.

It is known for good and bad reasons, though we’ll let you decide which is scarier: the tight twists and turns of the pavement, or the price tag on the street’s houses! 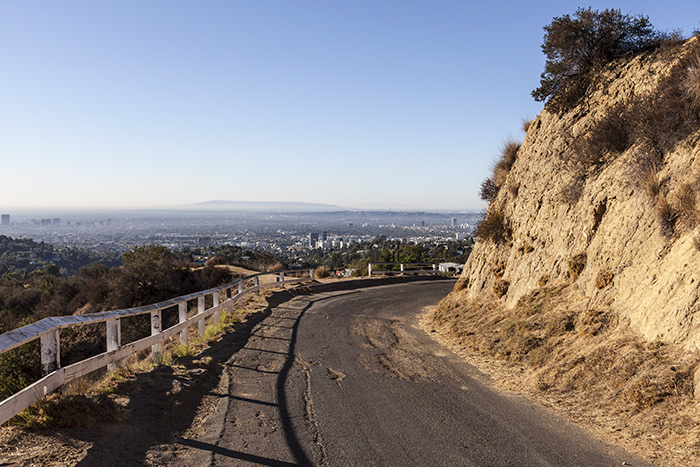 William Mulholland was an Irish immigrant who worked to develop the future megalopolis of Los Angeles. A self-taught civil engineer, he brought water to the arid valley via aqueduct and made the Los Angeles we know today possible, though his great career came crashing down after a grave accident at a dam he engineered.

The eponymous road was first built in 1924 and has had as dicey a relationship with fame as its namesake.

The road spans from one section of 101 Ventura Freeway near Woodland Hills eastward to just below Universal Studios. Another part branches off before the road crosses Topanga Canyon Boulevard (Rte 27) and travels west-south-west as Mulholland Highway, down to Leo Carillo State Beach off the Pacific Coast Highway.

If we add up the Highway and the Drive, Mulholland spans a full 34 miles across California. There’s even a part of hiking trail up towards the famous Hollywood sign named Mulholland Highway – nowhere near its paved counterpart.

Though Mulholland is classed as a minor arterial road, just below freeways and motorways, it hardly offers a quick pass-through drive. Seen in many movies (made right down the road, incidentally), it bends up the hillside in many switchback and sharp s-curve patterns.

Even more famous than its irregular path are the houses that line it. Some of the most expensive houses in America – even the world – are found on Mulholland Drive. Madonna, John Lennon, and Marlon Brando are a few stars who have settled in the Hollywood Hills.

Compared to some truly exotic zingers, Mulholland Drive is not as dangerous as other roads in America – why would they build houses on it if it were? – can be.

But since it doesn’t simply go in a straight line, it can be a tricky drive for those used to the easy drives down in the Valley. Being in a higher altitude while surrounded by the rich and famous with sharp turns ahead can be disorienting.

The speed limit is an average of 30, but at each precarious turn there are yellow signs cautioning only 25, sometimes 15 mph. It’s reasonably safe if you take it slow, though we can’t vouch for other drivers on the road. Oftentimes, traffic can slow movement on Mulholland down considerably so that it’d be impossible to speed.

Though some parts of road don’t have guard rails and run close to sheer drops, most of the road is safe to drive. For the parts that are trickier, there’s nothing wrong with slowing down to a speed you’re comfortable with.

Compared to the precisely laid out grids of the surrounding neighborhoods in Los Angeles, Mulholland Drive is scary.

Twist and turns are nothing compared to the meandering path of Mulholland Drive.

Safety comes with paved roads, though. The Eastern chunk of Mulholland Drive that crosses Marvin Braude Mulholland Gateway Park and a bit of the Westridge-Canyonback Wilderness Park is unpaved and closed to vehicles.

Hikers and (unmotorized) bikers can take this rocky path and experience historic sites and unparalleled views. The only scary part there would be getting lost, but as it’s quite hard to wander off train on the hillsides, we’re sure you’d just stumble into Jack Nicholson’s back yard and maybe he’ll invite you to dinner.

Mulholland Drive isn’t meant to be scary. It’s meant to be home to some, a tourist attraction to others, and a place of great beauty to all. If you’re desperate to see the views but don’t have the gaul to drive it yourself, there are tours you can book that drive you up there and stop off at viewpoints.

What do people say about Mulholland Drive?

Reviews about the drive down Mulholland are happy and … neutral.

The road has a high rating of 4.5 on Trip Advisor from close to 900 people, but none seem to shout about it being the best experience of their lives.

In fact, people are happy to have done the drive, having been in the area, but don’t say anything about it being the best part of their trip.

The San Fernando Valley views and the glimpses of fancy homes captivate tourists. Happy, but not repeat, customers seems to be the general gist. If we had time in L.A., we’d probably drive the road to enjoy a relaxing afternoon.

As one review put it, “worth a quick visit.”

Accidents and Deaths on Mulholland Drive

The internet is choc full of videos of crashes on Mulholland Drive. Rather, a lot of videos show motorcycle crashes.

It’s common knowledge that two-wheelers are at risk on the road.

Its windy turns are hard enough to manoeuvre, even if the driver is being careful.

Many, however, fall victim to that heady desire for speed and attempt to slalom down the road.

Though dangerous, a lot of these crashes aren’t always fatal.

Sometimes they can involve other motorists, making for an unnecessary incident.

Not all accidents on the road are due to speed, however.

In 2019, only 27 collisions occurred on Mulholland Drive, all of which simply sustained injuries.

Many of these accidents occurred at intersections or close to major highways, suggesting poor yielding judgement rather than speeding.

There are many news stories every year detailing the accidents that happen on Mulholland.

One infamous section is called Dead Man’s Curve, a common site for crashes.

There’s even a photographer who has made it his mission to capture the decaying wrecks of past crashes.

Jason Knight finds crashed vehicles that have never been cleaned up from their graves, some dating back decades.

Are all vehicles safe to drive on Mulholland Drive?

Something to remember about Mulholland is that it is a residential road. People live on it.

There will be trucks or busses or heavy transport of some kind, every now and again, but there will also be sportscars and motorcycles – all of which brings tourists into the area.

We don’t suggest you drive a tour bus up the road yourself – leave that to the professionals – but it’s a road like any other, so there’s no reason that you shouldn’t be able to navigate your motorcycle, sedan, or family van up the route.

Is Mulholland Drive Worth it?

If you’ve got the time and keen interest to see the sights, Mulholland Drive can definitely be worth it.

It’s important to keep in mind that the road is known for its traffic, though, so if your adventure is slow going, don’t be surprised!

There are also times accidents bring all movement to a halt as police shut down sections of the street to process the incident.

We suppose it’s worth the wait then. You can feel like a local celebrity just wanting to get home, if not for this infernal traffic!

In all its locations, under all its names, Mulholland is undoubtably an impressive route to travel. By car or foot, there are plenty of impressive views to be seen – both natural and manmade. The Hollywood Hills section is undoubtably the busiest, and most dangerous due to rubbernecking tourists, but the whole route is full of history and glamor.