For any who don’t live there, California conjures up the image of tanned, laid-back beach-goers.

Fifty miles inland, however, the scene changes. Not too far from glamorous Los Angeles or beautiful Laguna Beach, San Bernardino is less known for the fun and sun and more known for crime statistics, being one of the most dangerous cities in the country. 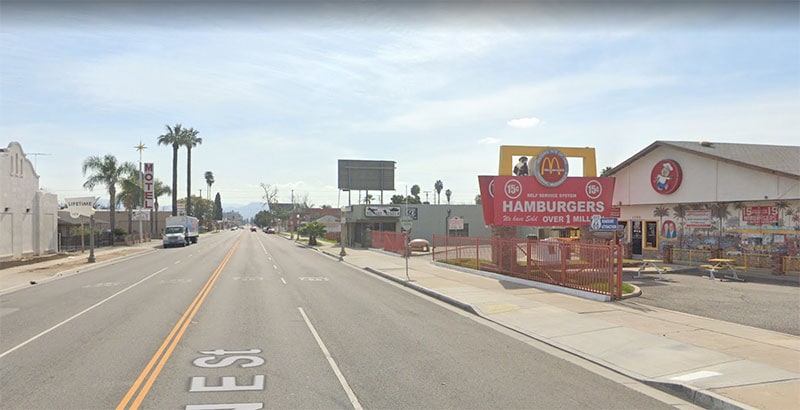 A person has a 1 in 86 chance of being a victim of a violent crime in San Bernardino, whereas they have only a 1 in 227 chance in the whole state of California. The city also has a much higher rate of burglary, rape, robbery, and theft per 100,000 people than the whole of the U.S.

The most recent, complete set of crime statistics comes from the San Bernadrdino Police Department and are for 2020 and 2021:

What is San Bernardino’s Crime Rate?

Here’s a scale to give you some perspective on San Bernardino’s violent crime rate:

Here are the violent crime rates for the past 5 years in San Bernardino:

Does San Bernardino have a high crime rate?

San Bernardino does have a high crime rate. It’s crime rate is a significantly higher than the national average and is on par with cities like Minneapolis, Albuquerque and Oakland. 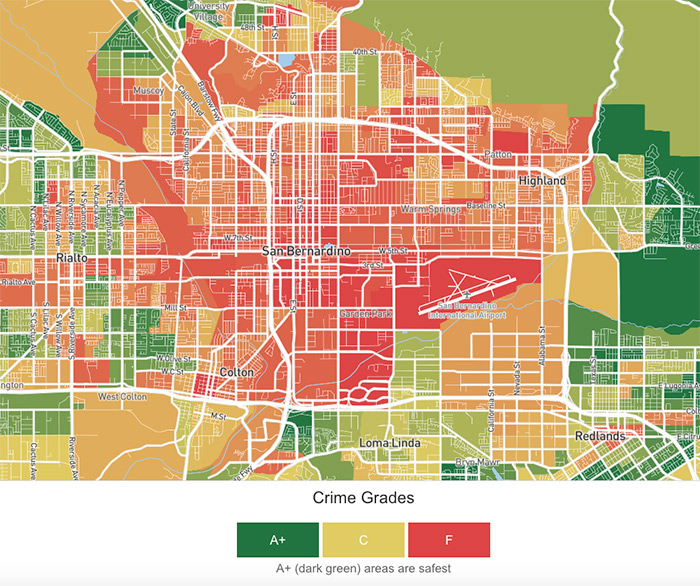 The city center is the most dangerous area. This includes:

Parts of Rialto, Highland, and Redlands can also be dicey.

Downtown San Bernardino is just above the center of the city. On the Crime Grade map, it’s solidly orange, some parts darker than others. As it’s bordered by Feldheym and Perris Hill, it’s hardly out of deep water. To the north and west, things don’t get much better. Suffice to say that Downtown is just as bad as the rest of the city.

The Safest Neighborhoods in San Bernardino

As with many places, the safest area are further out from the center in the less urban areas. Top ranking are:

In fact, these three are well outside the city center, mostly nestled along the San Bernardino National Forest.

The safest rated neighborhood closest to the city center is Patton in the northeast, then Pacific, according to one crime map.

What Do Residents Say About San Bernardino?

About the nice parts of San Bernardino:

About moving to San Bernardino:

A point made by several residents reviewing San Bernardino is that they don’t go out at night. Many don’t feel safe and prefer to stay home.

Without knowing which neighborhood they live in, it’s hard to determine if this is just one specific area or if it’s a more widespread concern across the city.

Is it safe for a woman traveling alone?

We imagine that if something brought you to San Bernardino for a visit, it’d be something important. Based on the crime stats and the city’s own residents’ reviews, it doesn’t seem like San Bernardino would be a pampering vacation.

Therefore, if you need to go we wouldn’t stop you, just advise caution.

The best bet seems to be in at night, making sure you’ve gotten back to your accommodation with plenty of time to unwind in the safety of your hotel room or AirBnB.

If you can, avoid the dangerous neighborhoods listed. If it’s unavoidable, we’d advise letting a friend or family member know your plans for the day – where you’re going and when you plan to be back.

If you’re staying at a hotel, you could even talk to the front desk to know when to expect you back.

It’d give you more peace of mind, too, if you text friends or family what you’re doing throughout the day.

Send them pictures or comments on what you see and do. It can relax you, being in touch with familiar people.

California’s state motto may be Eureka! but the only thing to find in San Bernardino is a city looking for love.

Crime rates may fluctuate but remain quite high. Residents and outsiders alike agree that there are plenty of better places to be and good wishes will only last for so long.

As many residents wonder where exactly their tax dollars go, we hope that California finds a way to put some love into this city.

A better quality of life is important for its residents, but will also help bring in more visitors.

Hopefully, San Bernardino will eventually climb its way down the crime ladder.