If you are thinking about visiting Detroit and have some qualms about the safety of the city, we got you covered.

We are going to deep dive into the statistics, look at some maps, graphs and talk to the residents of the city to give you a better understanding of how safe Detroit really is. 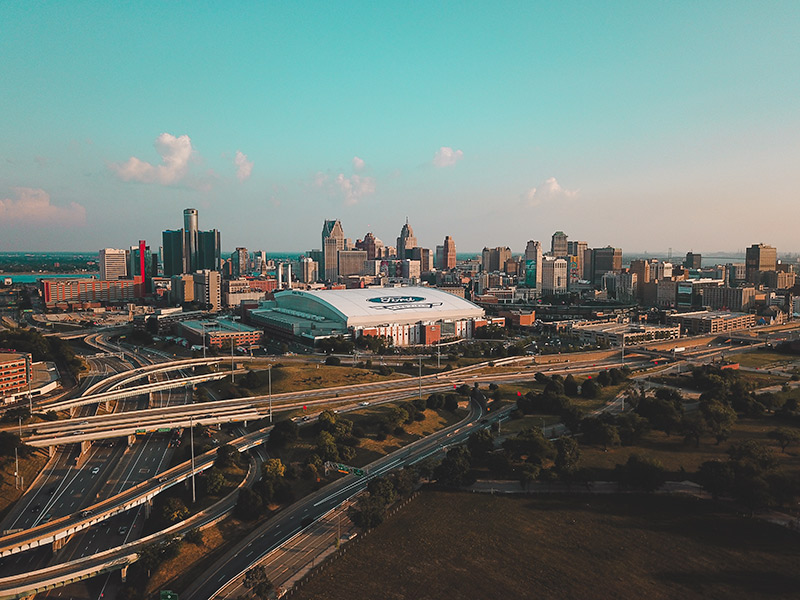 Statistically speaking, Detroit is not the safest place to visit. In 2021, Detroit had a violent crime rate of 2294.04 per 100,00 people and is one of the highest crimes rates in the nation.

It’s murder rate of 47.91 per 100,000 people is also one of the highest in the nation and is on par with cities like Memphis, Baltimore and New Orleans.

However as a tourist, you can have a relatively safe experience as long as you stay in touristy areas and do not stray off the beaten path and into the neighborhoods were violent crime is concentrated. 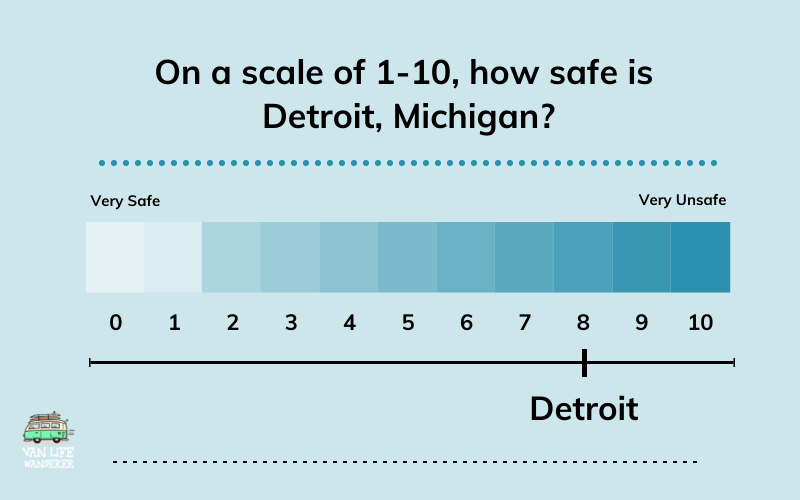 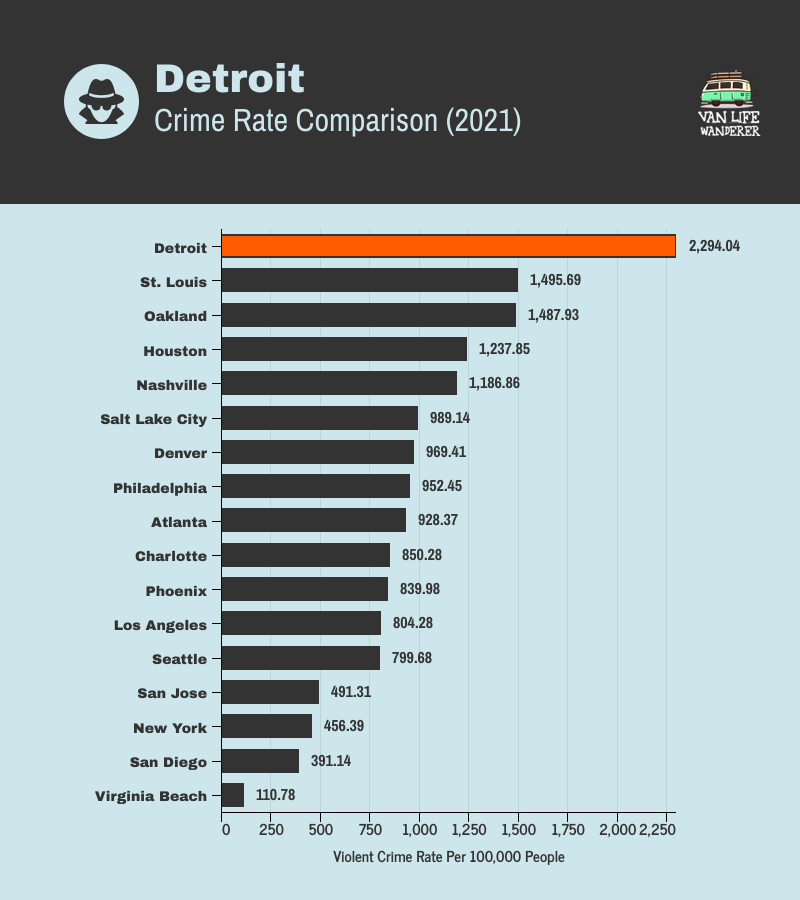 Here’s a graph showing you how violent crime has trended in Detroit over a 12 year period. 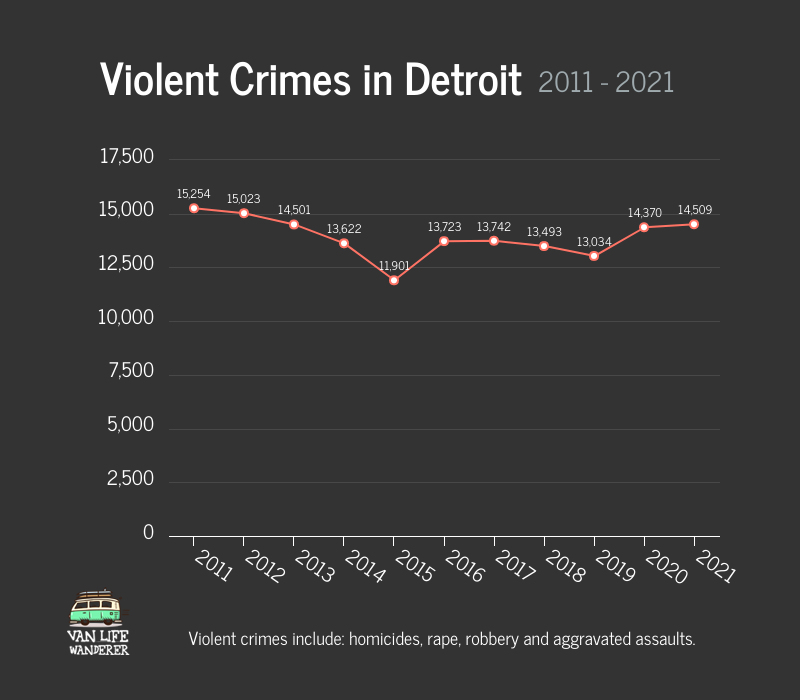 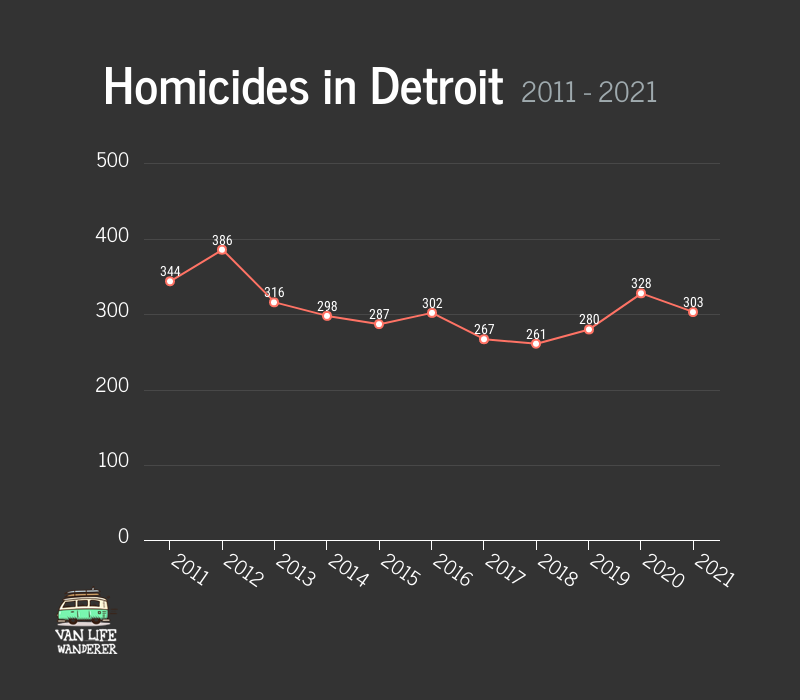 Here’s a graph that shows you how Detroit’s murder rate compares to other cities with high murder rates. 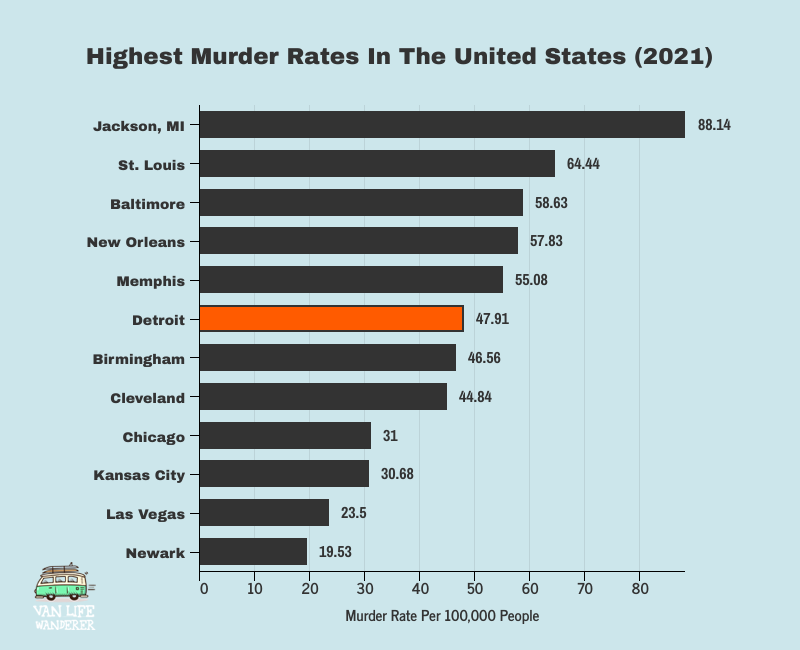 Here’s a map showing you how property crime has trended in Detroit over a 12 year period. 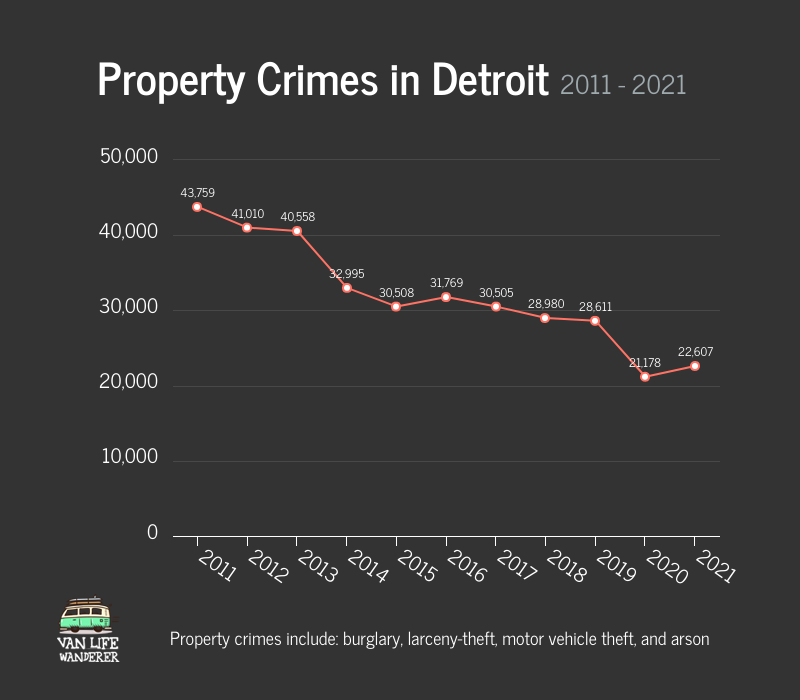 What happened to Detroit?

Detroit was built around only one industry, which was ultimately its downfall.

It grew exponentially when the Big Three automakers (General Motors, Ford, Chrysler) was thriving, but when the Asian imports began outpacing its American counterparts, they had to lower its manufacturing costs in order to compete.

They did that by outsourcing jobs to Asia, Mexico etc and as car manufacturing went overseas, nothing replaced it.

Many people in Detroit began losing their jobs and left the city in what appeared to be a mass exodus.

People with money began to leave the area as the city became poorer.

There was no demand to buy properties or start businesses because no one wanted to live there.

Another thing that needs to be understood is the size of Detroit… it’s huge, 138sq miles huge. You can fit San Francisco, Manhattan and Boston inside Detroit!

After a huge swath of residents left the city as the jobs disappeared, it left pockets of people spread out all over the city.

The local government was stuck with the arduous task of trying to maintain the city’s infrastructure to serve the entire city while only receiving taxes from the left over population, which was not sustainable.

The police became severely underfunded and the city went to hell with crime.

To sum it up, Detroit has no core industry anymore, the wealthy people are long gone, vacant properties don’t generate taxes and all the things that makes a city nice cost money, which Detroit has none.

Here’s Maps Showing You The Most Dangerous Neighborhoods In Detroit 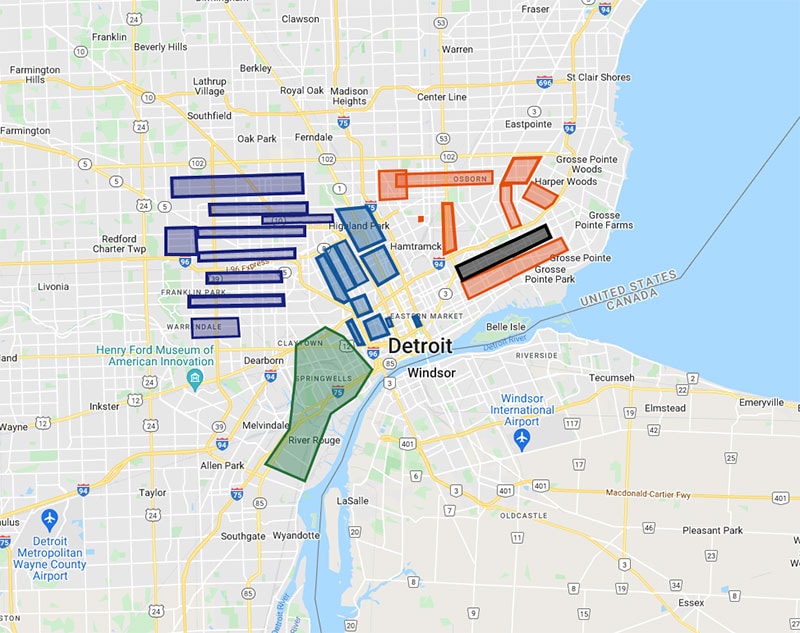 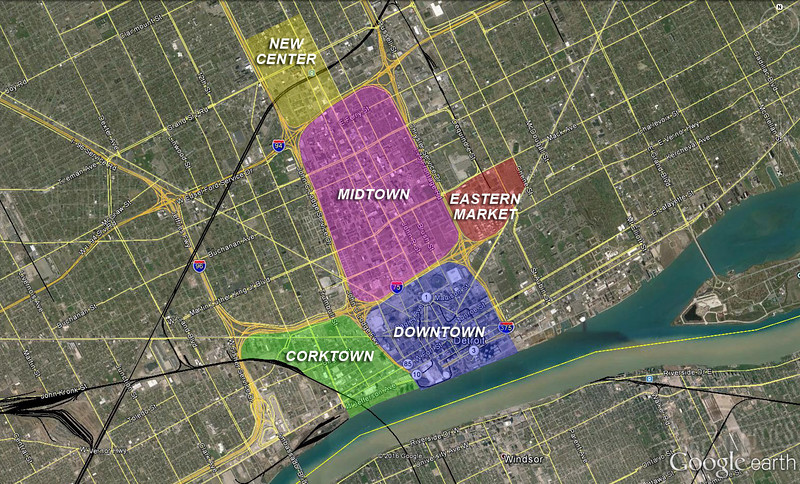 Is Downtown Detroit safe to visit? 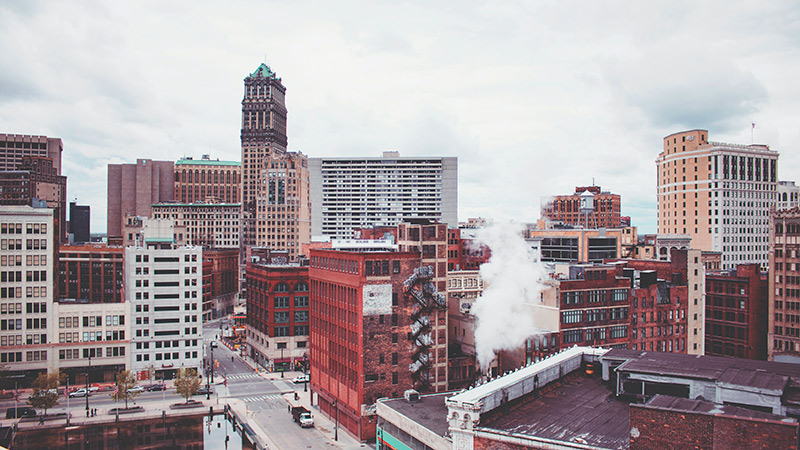 You should have no qualms about visiting downtown. It is a relatively safe area with a strong police presence. There have been a lot of investment into the renovation of Downtown and it has been completely transformed over the last decade. It used to be a ghost town and now it’s a thriving center with restaurants, breweries, bars, museums, music venues, etc.

On the weekends there’s lots of night clubs, bars, concerts and art shows going on. It’s totally safe to just barhop and walk around town.

Although Downtown is relatively safe compared to other parts of the city, that doesn’t mean you should throw caution to the wind. Always keep your wits about you, trust your intuition and practice common street smarts.

What do residents of Detroit say about it’s safety?

Is it safe to drive/walk around at night?

Downtown and midtown are pretty safe to drive around at night.

When you step out of Downtown and into the inner city, that can be a entirely different story.

It is best for your own safety to not drive or walk around the neighborhoods outside of Downtown Detroit, especially at night.

If you stay within this 7.2 square miles of downtown, you should be fine.

We also recommend that you avoid walking alone at night. If you don’t have a companion, please be super cautious of your surroundings, don’t wear headphones, stay off your phone and stay in well-lit areas.

What is the significance of Detroit’s 8 mile road?

Detroit’s 8 Mile Road runs east to west. To the north of it are suburban Macomb and Oakland counties. To the south of it is Wayne County and the city of Detroit.

It is the de-facto dividing line of the rich from the poor, the black from the white, the haves from the have-nots.

It is both a physical barrier and a psychological one.

Final thoughts on the safety of Detroit

There’s no skirting around it, Detroit has a lot of crime, it has a lot of murders and it consistently tops the list of most dangerous cities in the United States.

If you are going to visit, the downtown area of Detroit is generally safe and residents of the city resoundingly agree that you should not encounters problems if you stay within the boundaries of downtown and midtown.

When you stray out of downtown and into the neighborhoods below 8 mile road, you start to encounter sketchy, gang infested neighborhoods.

Hopefully the revitalization of the downtown area can spread its luster amongst the surrounding communities and hopefully one day we can see Detroit unhinged from the shackles of crime and see it in its former glory.