The Teton range of mountains in Wyoming boast over 200 miles worth of trails to explore through the Equality State. Nestled along the western border of the state, Grand Teton National Park sits just below Yellowstone. Some may think it pales in comparison to its more famous neighbor, but Grand Teton has plenty of its own claims to fame.

Is October a good time to visit Grand Teton? 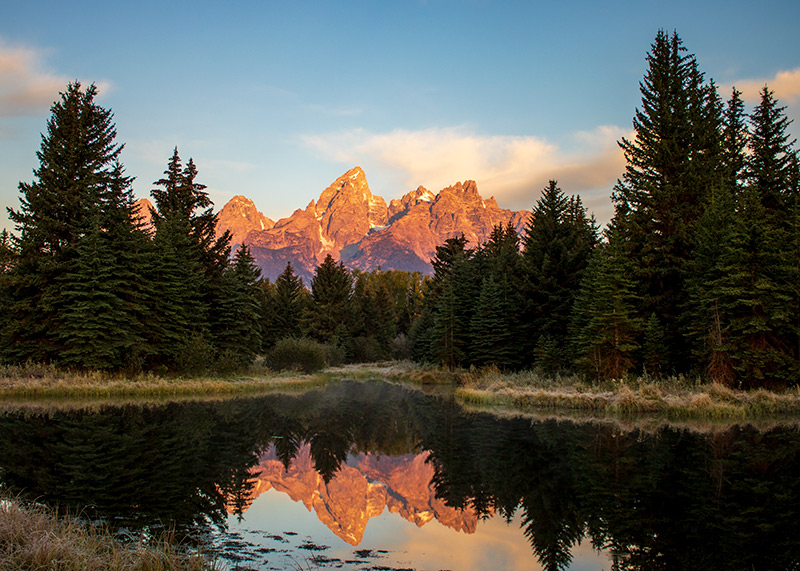 Grand Teton National Park has an entire page dedicated to “Fall in the Tetons.”

It’s a time of migration for many of the native species that use the Tetons as a corridor from their summer to their winter homes, as they’ve done for millennia.

As October is the harbinger of fall, it is the ideal time to see Mother Nature at work. While November still promises a rainbow of colors, the approaching winter temperatures are sure to put some off. October is a very good time to visit Grand Teton.

The National Park itself declares “sunny days and cool nights” in October which “alternate with rain and occasional snowstorms.”

The odds of getting caught in a snowstorm in October are unlikely, but it is good to keep in mind that autumnal weather can be volatile.

The average high in October is 55º and the average low is 23º. The average precipitation is also relatively low for the year, though not as dry as the summer months. Ideal conditions for someone who doesn’t like hiking in high heat.

Is Grand Teton crowded in October?

Booking in advance is obviously a way to avoid paying too much for flights and hotels, but it is also the off-season which makes things slightly better than a trip in June, for example.

However, Wyoming is remote. It is usually more expensive than quick city-hopping flights.

According to Kayak, the average prices for roundtrip flights from major cities to Jackson, Wyoming (the closest airport) are:

As far as hotels go, October is a good time to book as there is decent availability. Being a rather vacation-oriented corner of Wyoming, though, nightly rates never get terribly cheap.

In the winter time there are a lot of nearby ski resorts which can raise prices. The cheapest hotels that come up on Google are around $120 per night and easily go up above $350.

Things to do in October:

As with many National Parks, outdoor activities such as hiking, fishing, and biking (to name only a few) are quite popular at Grand Teton.

The many rivers and lakes also allow for what the NPS website describes as “boating and floating” – activities that do come with regulations vital to the preservation of nature and wildlife in the park, so do read up beforehand on the Dos and Don’ts of boating in Grand Teton (which you can find here).

Thanks to the Tetons themselves, climbing and mountaineering are also options. While you don’t need a permit to scale the mountainside, you do if you’re staying overnight.

There is a $45 fee to reserve in advance ($35 for walk-ins) on recreation.gov for backcountry and bivouac camping.

Another way to see the trails is by horseback. There are three authorized concessioners from whom you can rent horses to see the Tetons with. 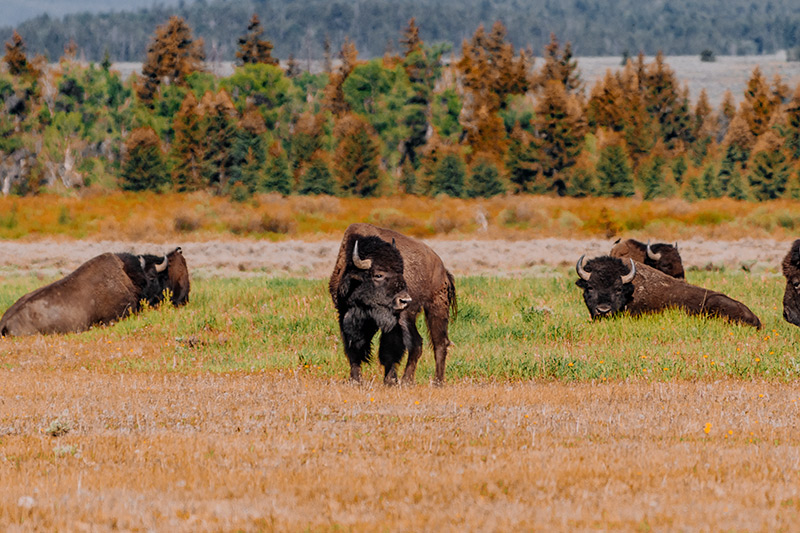 Bison, pronghorn, and elk are all migratory animals which call the Tetons home. All three begin to head south as the temperatures drop.

The pronghorns have been following their migration path for nearly 7,000 years, amassing the second largest migration in the Western Hemisphere.

Fall is mating season for deer, moose, and elk, a group of animals referred to as ungulates. Bugles and drums are heard across the park, but these sounds are not manmade. They are the calls of bull elk and the sounds of their antlers clashing as they spar with each other to claim a mate.

October is a time of movement in the Tetons, seeing a great migration of hundreds of thousands of animals preparing for the cold, calm winter. This includes bears.

Sightings of them are not unheard of, so it’s important to be up to scratch on your bear safety and how to enjoy these majestic creatures from a distance without putting yourself at risk.

Hiking is highly encouraged in the Tetons in the fall. There’s so much to see that it feels like the wildlife and nature of the park are putting on a show. Temperatures are more comfortable, so you won’t get too sweaty on your hike.

It is possible that higher-elevation trails may be less accessible due to weather conditions, so plan ahead if one of those paths are on your to-do list. While the lower elevations may look and feel solidly fall, the mountains can experience autumnal snowstorms (which make for beautiful photos but not a great hike). 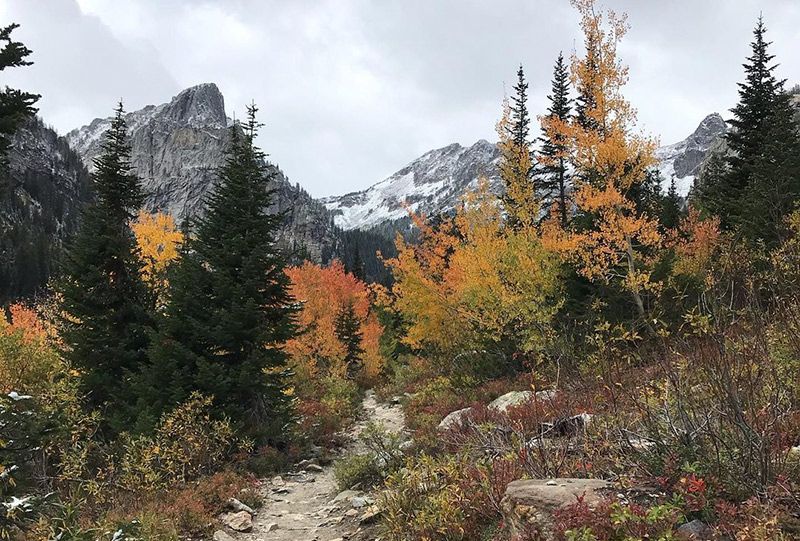 All Trails has a page with recommended hikes that are best in the fall. We began to list the suggested routes here before we realized there are three whole pages worth of walks!

Check out the extensive list here and see that there’s no excuse – from easy to difficult hikes, there’s a path for everyone. Hikes last anywhere from 1 to 8 hours, so the choices really are endless.

As we mentioned, it’s necessary to book an overnight permit to camp in Grand Teton. You can book in advance for an extra fee to be guaranteed a spot, or pay $35 for a walk-in permit, although it’s not guaranteed that you will be able to camp that day as it’s first come, first serve. They do reserve 2/3 of the available permits for walk-ins, though.

Camping in October, however, you don’t have to worry about the fuss! Advance reservations are only in the beginning of the year (from January through May) for the summer months.

In October, there will certainly be less people. You should still keep an eye out for the authorized camping zones which are marked here on a map.

One other factor that doesn’t adhere to the high season is bears. Both black bears and grizzly bears call Grand Teton home. It’s important to be up-to-date on your bear safety when camping in the back country so that you can enjoy the experience fully.

Color is key in my photographer’s minds and Grand Teton is not short on it. The change in seasons brings the iconic fall outlook to the Tetons.

As the chlorophyll drains away from the park’s trees, it leaves (pun intended) behind that beautiful autumnal palette associated with fall-time photography.

Brilliant hues of orange and yellow appear in swathes among evergreens; natural tones painting a vibrant picture against the steely grays of the Teton mountain range and seasonal sky.

You’re most likely to see a lot of yellow leaves because of the aspens, narrowleaf cottonwood, and willows. Black hawthorn trees give a bit more color, adding a sunset orange to the canvas.

Benefits of visiting in October

The obvious benefits of visiting this northern National Park in the off-season is exactly that: less people being on park grounds.
Visiting Grand Teton in October gets you:

Drawbacks of visiting in October

Every season has its pros and cons. Visits in October shouldn’t be considered impossible, not by far. There will, however, be some factors to consider when planning your trip that may be drawbacks. The downsides of visiting Grand Teton in October are:

Tips for visiting in October

Temperature and amount of rainfall affect the colors the leaves change each autumn. If the summer’s been a wet one and the beginning of fall quite dry, there’s a better chance of a more vibrant spectrum of colors.

Sure we all want a lovely summer, but if a trip to Teton is on the cards in the fall then you’re in for a treat!

National Parks tend to be synonymous with two seasons: summer and winter. Either they’re a fair-weather haven for outdoor fun in the sunshine or a winter wonderland ideal for aurora borealis seekers.

Don’t rule out the autumn, though, as fall in Grand Teton National Park can be absolutely breathtaking.