If you are thinking about visiting Santa Monica and have some qualms about the safety of the city, we got you covered.

We are going to deep dive into the statistics, look at some maps, graphs and talk to the residents of the city to give you a better understanding of how safe Santa Monica really is.

Is Santa Monica Safe To Visit? 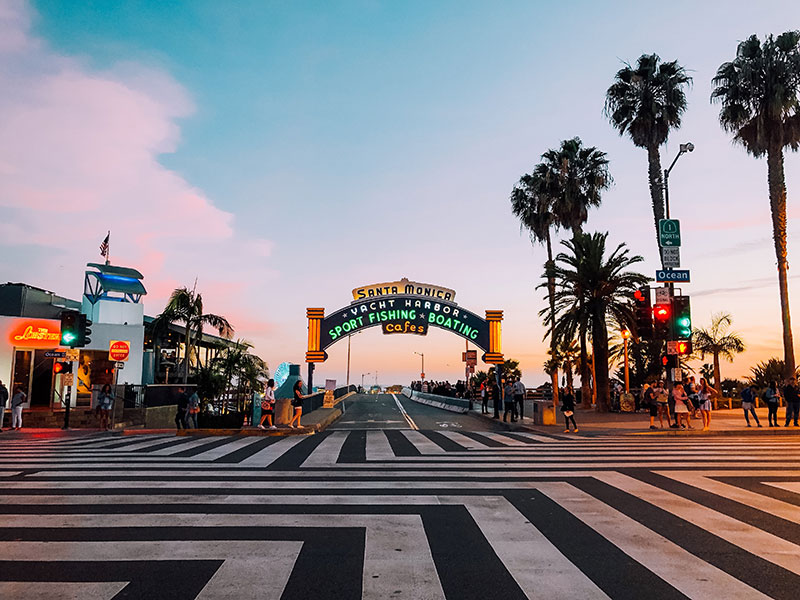 Santa Monica is a safe place to visit. It’s one of the safest areas of Los Angeles and it’s crime rate is not indicative of a dangerous city. 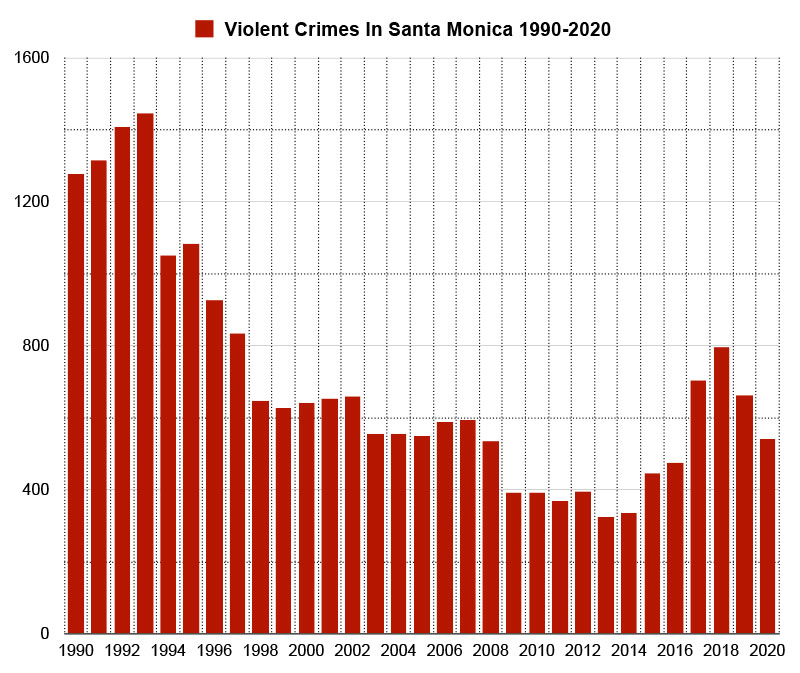 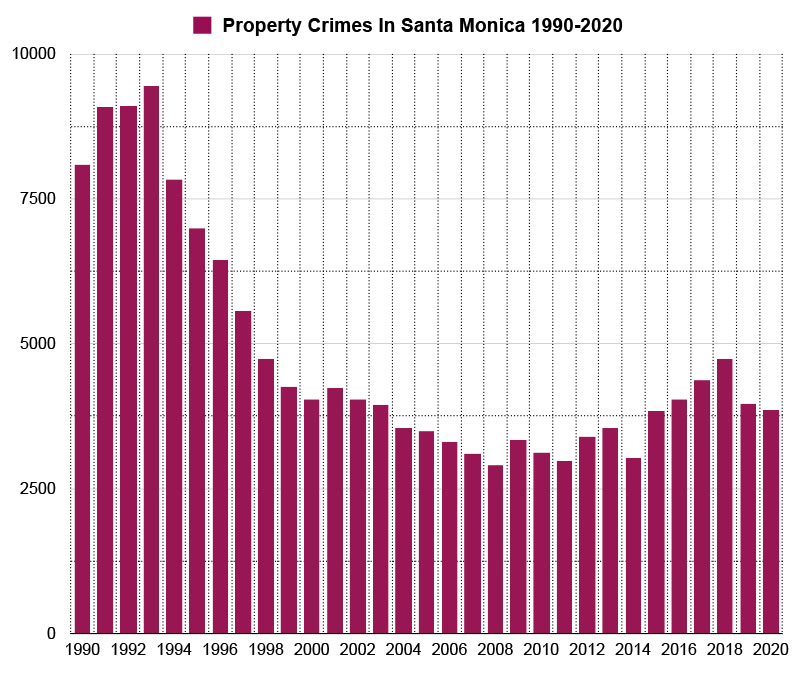 The most recorded number of homicides in the last 30 year years was in 1991 when 14 homicides were reported.

Santa Monica vs Other California Cities

Here’s a graph showing you how Santa Monica’s violent crime rate compares to other cities in California.

Santa Monica’s violent crime rate is 2.4 times less than Stockton, the most dangerous city on the list. 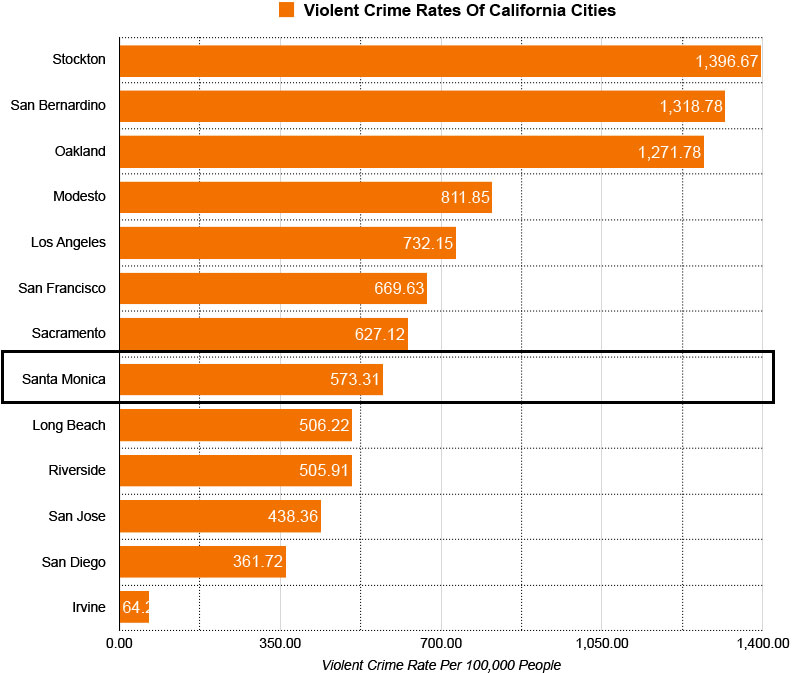 Santa Monica vs The Most Dangerous Cities In The United States 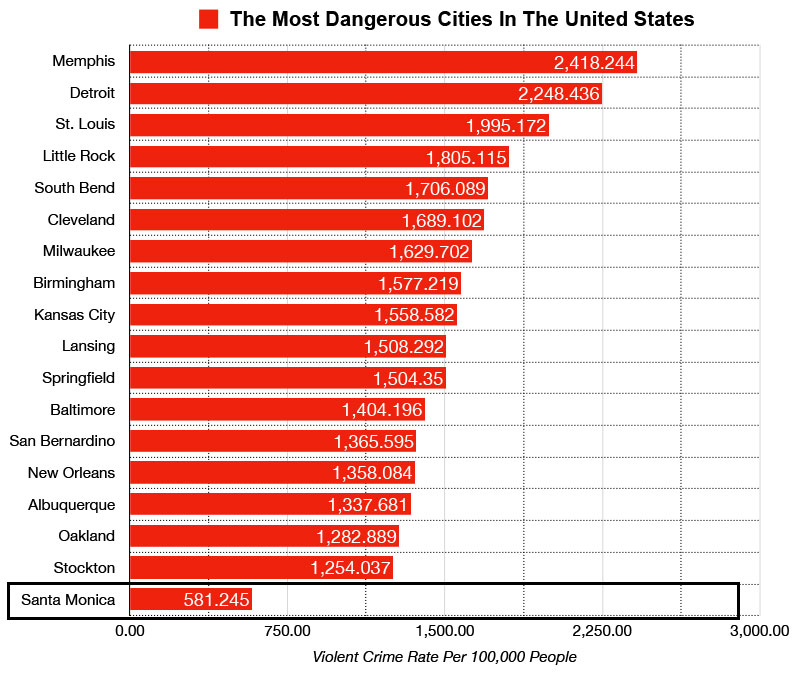 What do residents of Santa Monica say about its safety

Is The Santa Monica Pier Safe?

The Santa Monica Pier is generally safe to visit during the day and night. There are usually crowds of people on the pier and there is a good amount of police presence in the area. Things might feel more sketchy later in the night when the crowd thins out and the pier becomes more deserted.

Downtown Santa Monica is a safe area to visit. It is is walking distance of the Pier and there is usually a good amount of people and police in the area.

Santa Monica beach is a very safe beach to visit during the daytime. However you should be careful to avoid going too far south and ending up on the Venice Beach Boardwalk at night. It is a very sketchy area and there are homeless encampments set up throughout the entire area.

Is Santa Monica Dangerous At Night?

Are There Any Bad Areas in Santa Monica?

There are not many bad areas in Santa Monica and the bad areas are relatively safe compared to most other areas of Los Angeles.

Certain areas of Lincoln Blvd, south of the 10-fwy can be sketchy and we recommend that you not walk alone by yourself at night around that area.

Is Santa Monica Safe For A Woman?

Santa Monica is safe for woman traveling alone. As long as you avoid walking in deserted areas at night and stay on well lit streets, you should be fine.

Santa Monica is perfectly safe and has a lot to offer in terms of restaurants, bars, shopping and attractions. It’s violent crime rate is not indicative of an unsafe city, however it does have a property crime issue, so cautious of your beloings.

There’s a fair amount of homeless people scattered around the city, but other than that it’s perfectly fine.