If you’re visiting the Dallas area, it’s worth making a stop in Carrollton.

With amazing restaurants, clean neighborhoods, famous restaurants, and more, this historic town will give you the inside scoop on what Northeast Texas is all about!

What is the city known for?

Carrollton is a well-known suburb of Dallas that is 37 square miles.

It’s a popular place for families to settle down after living in the city and has a wonderful historic downtown.

It also has a series of well-earned accolades:

Where exactly is Carrollton, Texas? What cities is it close to? 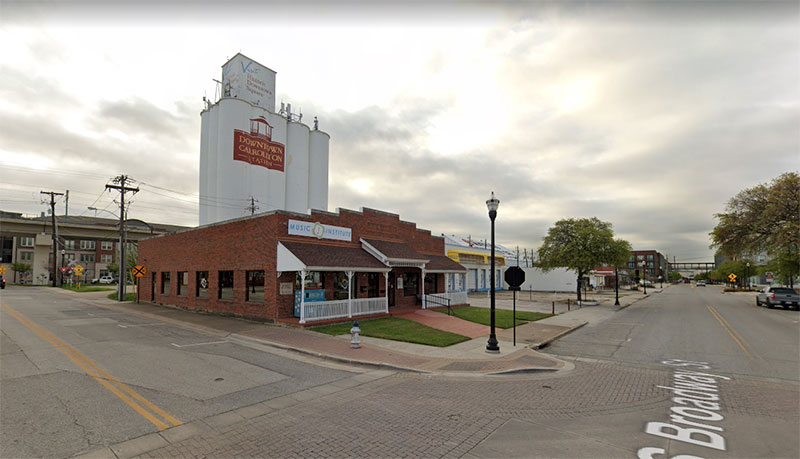 Carrollton is in the Northeastern part of Texas. It resides in three different counties: Dallas, Denton, and Collin.

The five towns and cities Carrollton is closest to are:

How far is it from Fort Worth, Dallas, Houston, and Austin?

These cities are all relatively close to Carrollton, considering how large Texas is.

Here are the fastest routes to get to each city from Carrollton:

The area was first settled in 1842. It stayed as an agricultural area for a long time, but after the Dallas-Wichita Railroad was built in 1878, it started to transform into a more industrial city.

By 1885, Carrollton had 150 people living there with a school, two churches, cotton gins, and flour mills.

Carrollton was officially incorporated in 1913. By the 1940s it was considered a “grain and gravel” town.

Now it has a bustling downtown and is one of the greatest cities to visit or live in Texas!

Here are the average lows and highs of Carrollton, organized by season.

Is Carrollton, Texas Safe To Visit?

Statistically speaking, Carrollton is a very safe place to visit. In 2020, Carrollton had a violent crime rate of 118.41 per 100,000 people and is one of the lowest crime rates in all of Texas for a city of its size.

Carrollton’s violent crime rate is on par with cities like Irvine, Plano and Virgina Beach.

Here’s a map showing you how violent crime has trended in Carrollton over a 30 year period. 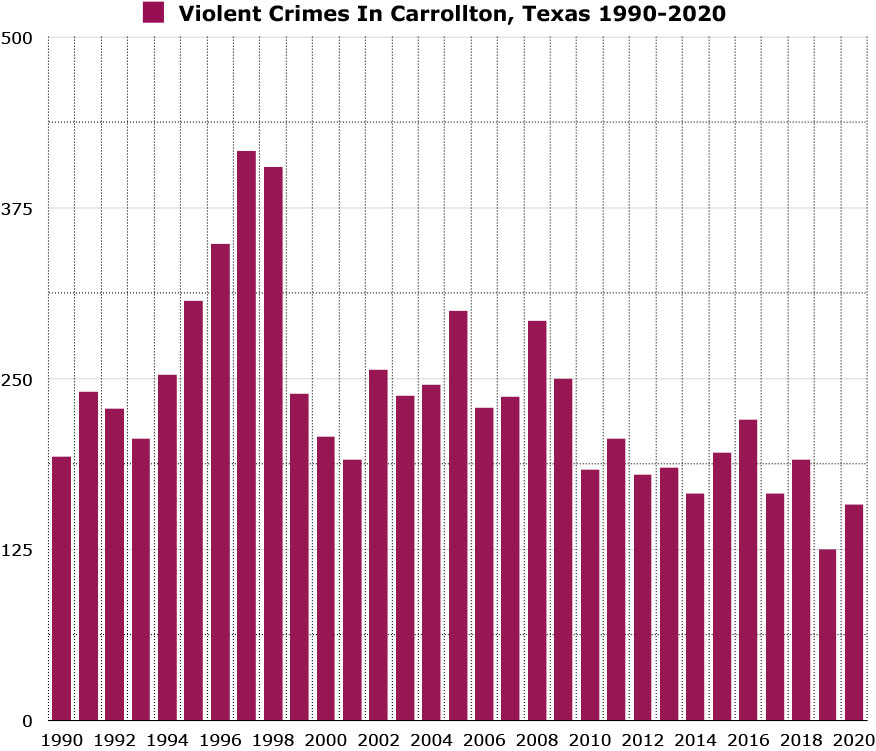 Here’s a map showing you how property crime has trended in Carrollton over a 17 year period. 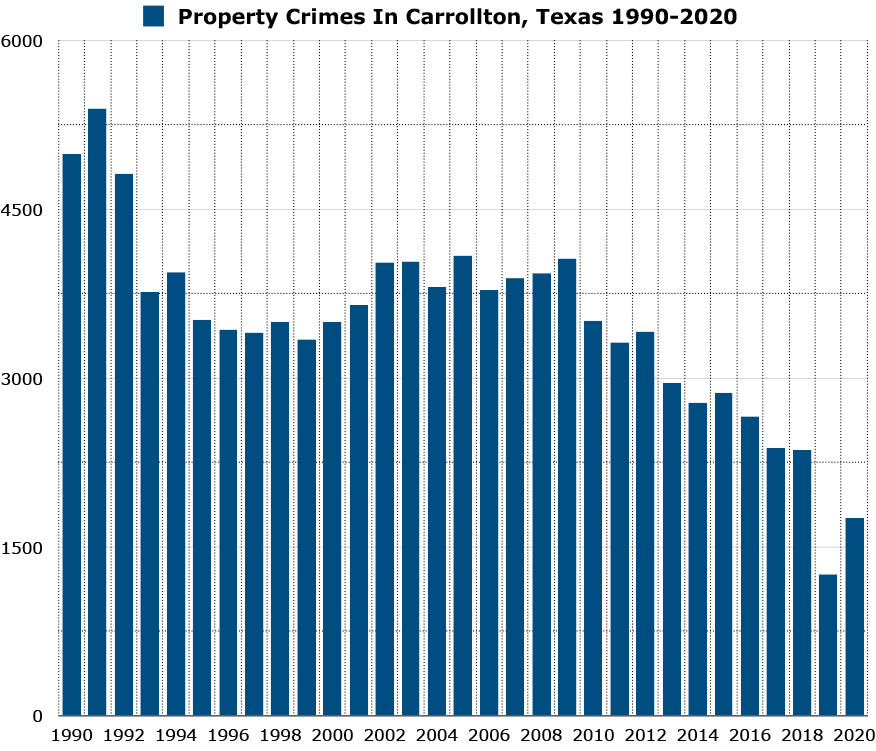 Carrollton vs Other Texas Cities 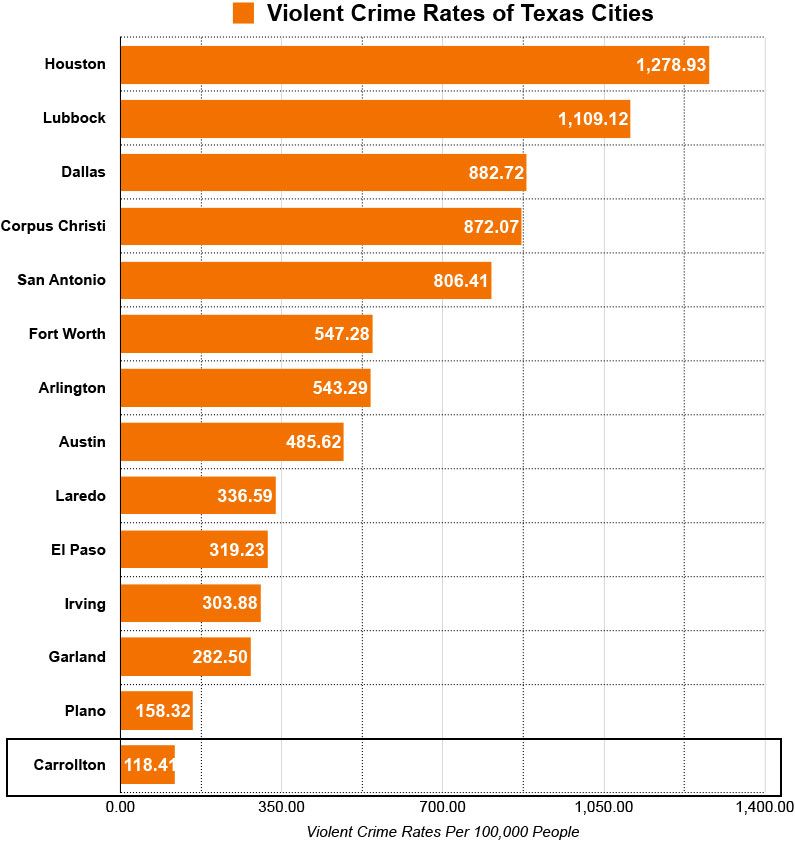 (Related: The Most Dangerous Cities In Texas)

Carrollton vs The Most Dangerous Cities in the United States 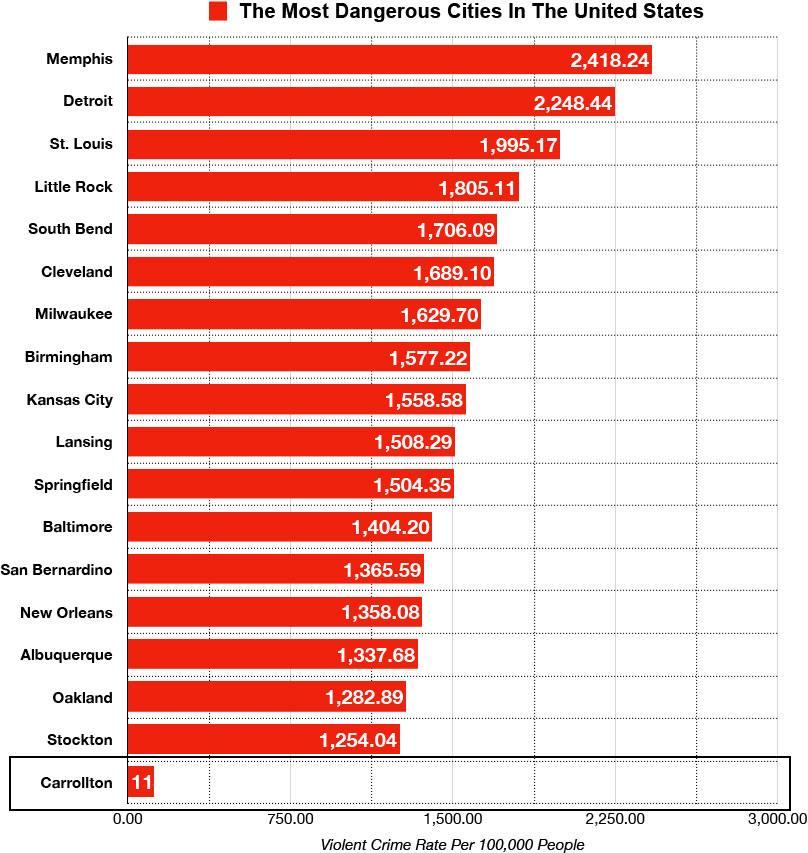 The Best Things to See and Do

Each business has a hometown atmosphere, with a wide range of restaurants, services, and shops to choose from.

The American Legion Post 597 is also located here, bringing a feel of patriotism to the area.

The Old Downtown Carrollton Association (ODCA) works with the City of Carrollton to preserve its history and old buildings. 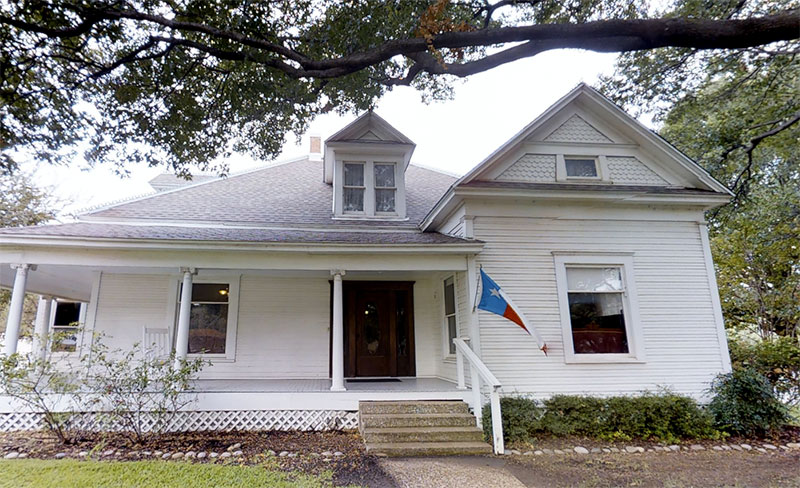 This homestead museum offers insight into what life was like in Northeast Texas at the turn of the 20th century.

The museum was built in 1909 and restored in 1976. The foundation stones of the first farmhouse on the land can still be found in the museum’s backyard.

The museum offers tours, traveling trunks to local schools, birthday parties, and virtual tours. There are also opportunities to volunteer. 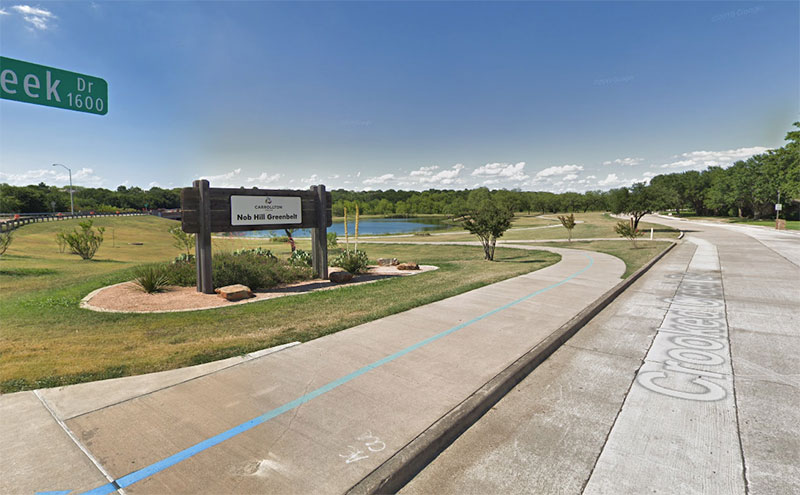 The Carrollton Nob Hill Greenbelt: Blue Trail is a heavily trafficked out and back trail that is nearly 8 miles long. It has gorgeous wildflowers and is a great trail no matter what your skill level is.

The trail is mostly used for road biking, bird watching, running, and walking. Dogs are allowed as long as they’re kept on a leash.

The trail is open year-round. 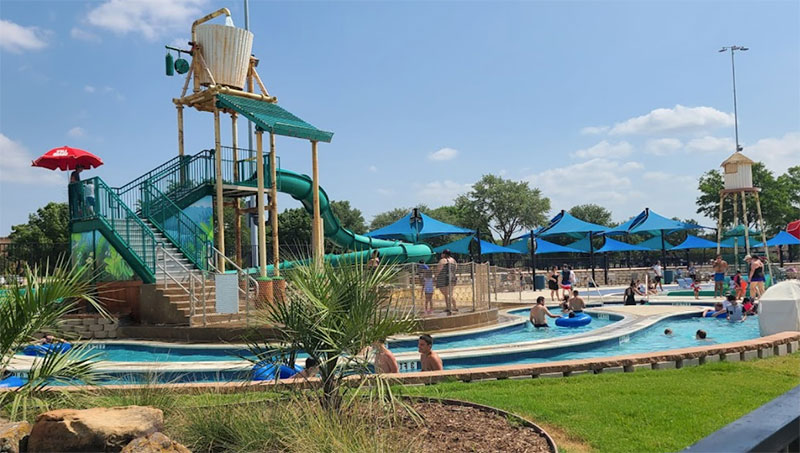 You can also get season passes, either individual or family. 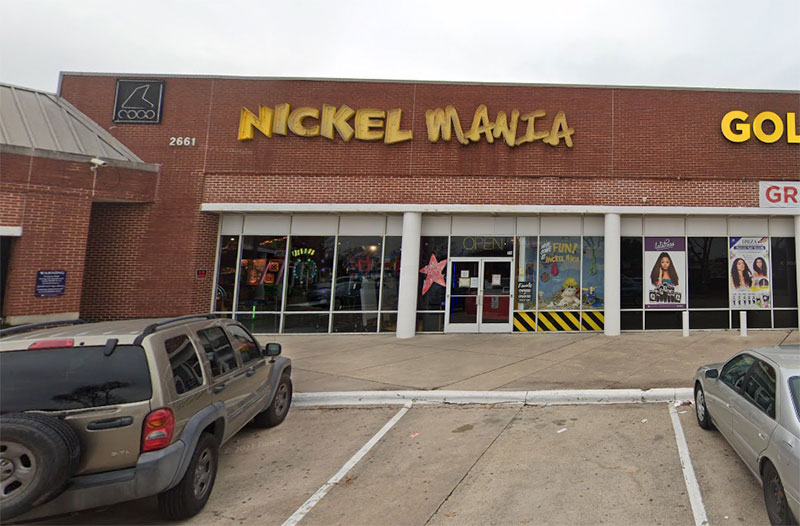 Nickel Mania is a nickel-operated arcade located in Carrollton with over 125 modern and classic video games to play.

They pride themselves on giving customers more entertainment per dollar since they are based on nickels instead of quarters. They’ll give you cups of nickels when you bring in money- for example, 100 nickels for $5. 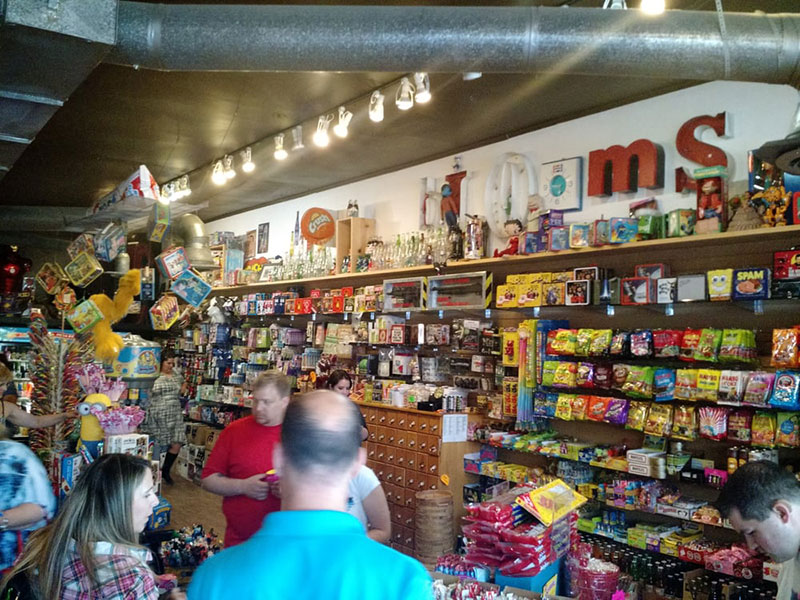 Blooms Candy & Soda Pop Shop is a must-visit when passing through Carrollton. They have over 400 retro sodas in stock and love supplying the community with nostalgic candies like bubble gum cigarettes.

Some sodas are really hard to find because certain manufacturers only sell their sodas to local regions and never pass state lines. This shop finds the best sodas available- going as far as a years-long hunt for Grapette glass bottled soda.

Stop by for some soda and treats that will bring you back to childhood!

Restaurants and bars that locals love 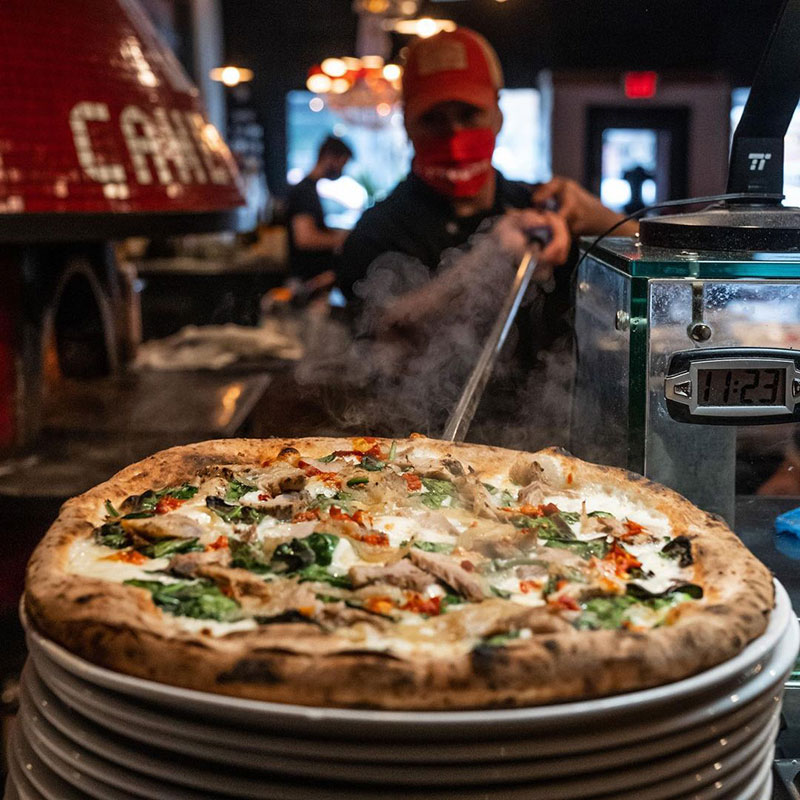 Cane Rosso has anything you could ever ask for.

Cane Rosso is the brainchild of owner Jay Jerrier, who fell in love with Italian food when visiting Italy in 1995 for his honeymoon.

When he returned to Texas, he started training with Master Pizzaiolos. After extensive training, he opened Cane Rosso. 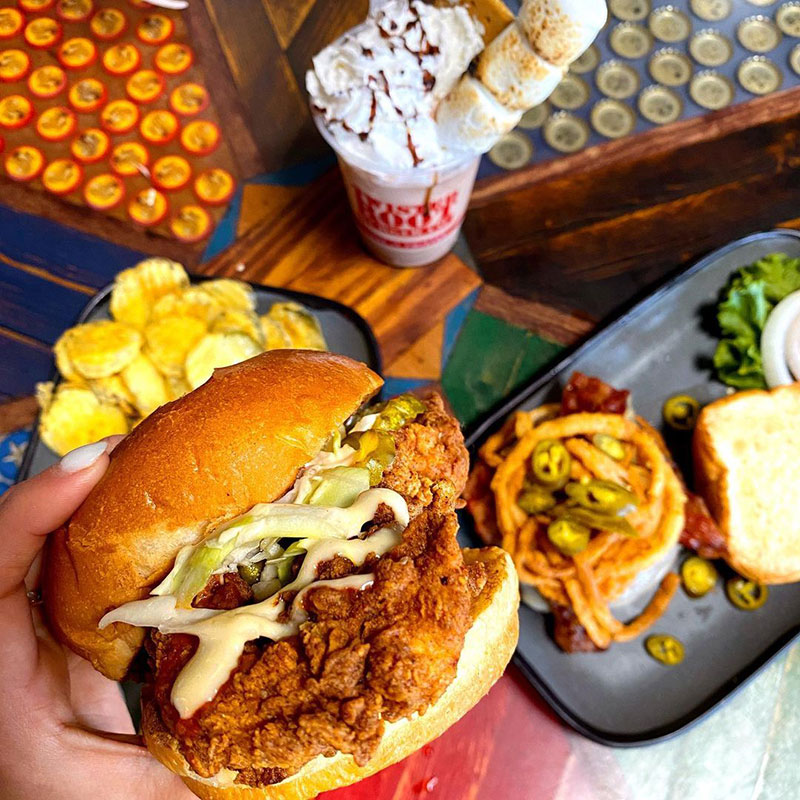 This incredible burger joint is featured on Trips to Discover, and for good reason. They also appeared on Diners, Drive-Ins, and Dives with Guy Fieri in 2009.

They describe themselves as “a flip flop and baseball cap burger joint where the locals know the only thing we take seriously is our food!”

They started cooking gourmet burgers before the industry’s boom with half-pound, fresh ground burgers and a list of impressive toppings. They make their own condiments and pickles, all toppings are made in house, and they source local buns.

If you’re looking for the best burger of your life and want to eat like a local, look no further! 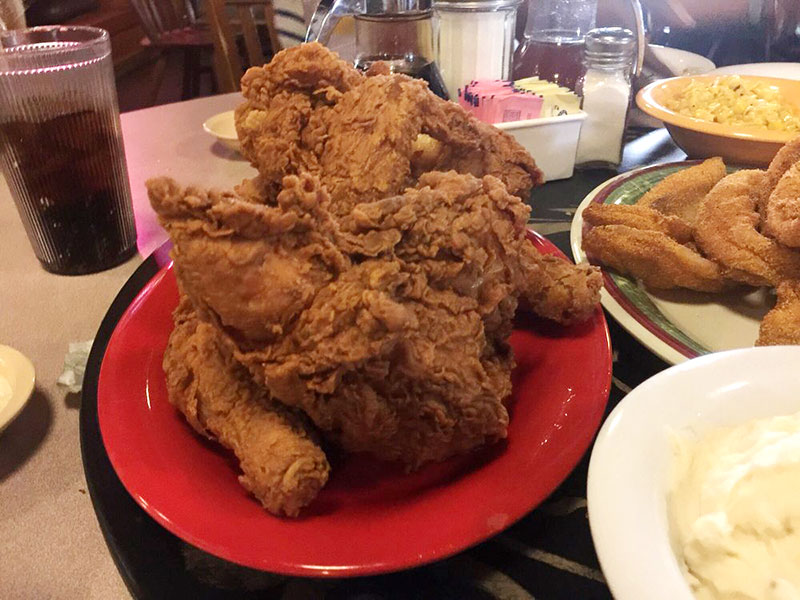 This superb restaurant opened up almost two decades ago, and has been going strong ever since.

The wait staff is wonderful, the owner often makes his rounds to say hi, the food comes quickly (without sacrificing quality!) and the portions are huge. 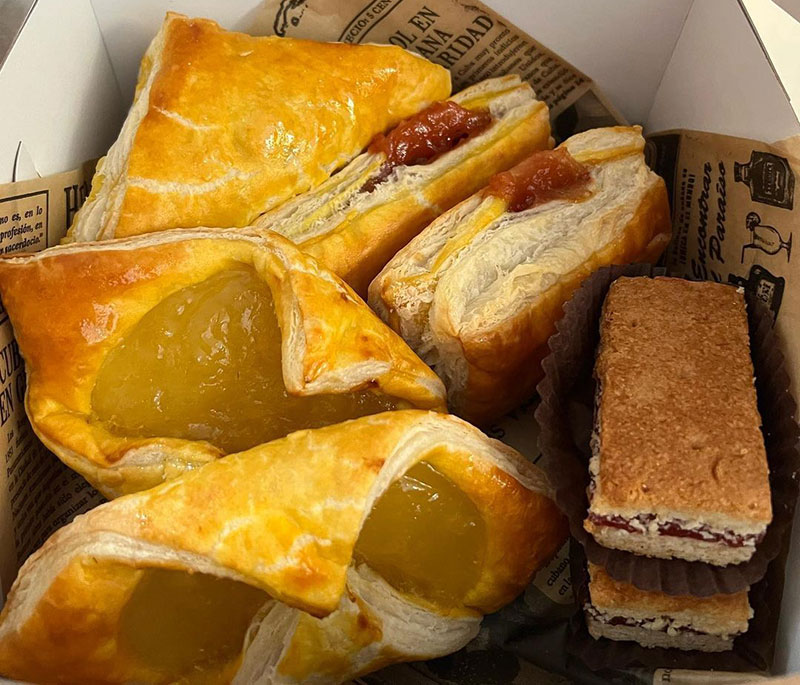 Sisters Sara and Rita continue the tradition of Cuban Dulceria, which was founded over 30 years ago by their parents.

They are a boutique bakery that also serves Cuban delicacies like authentic Cuban sandwiches, made with their famous Cuban bread that they press to perfection.

They’ve made it onto many magazine’s “best of” lists, most notably in the Observer as one of the 100 Favorite Dishes of Dallas. 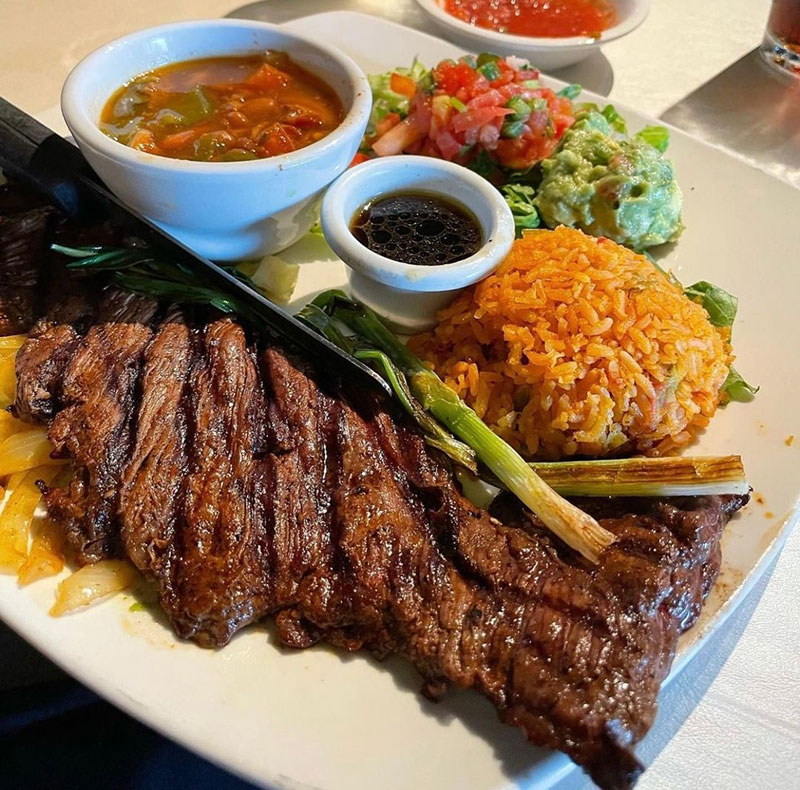 They have over 25 years of experience, using only the freshest ingredients and best Mexican recipes.

Their tortillas are homemade and their menu has everything ranging from traditional tacos to house specialties.

For true Tex-Mex, this is the place to be. 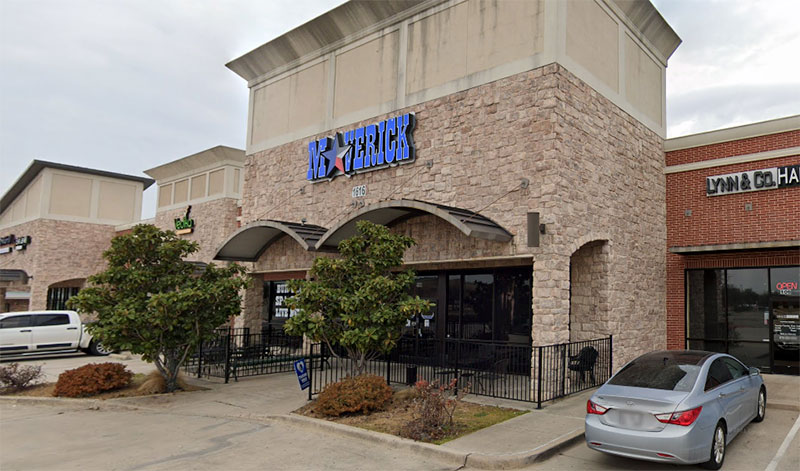 The Maverick had to make its way onto our list as the favorite local bar.

Open daily from 11am-2am, they offer burgers, sports, music, and drinks. Their honorable mentions include their bacon wrapped jalapenos and their chicken wings.

They have events almost every night with treasured weekly recurrences like karaoke and Pub Poll.

With a 200-inch TV screen, 30 other TVs throughout the bar, poker, billiards, darts, ping-pong, and more, you’ll never have a bad time at The Maverick.

What do residents think about Carrollton?

Carrollton is a safe place to live with lots of different neighborhoods to choose from. Over the past decade it has gone from a standard city to a fantastic place to live and visit.

Although Carrollton itself doesn’t have a large nightlife, the close proximity to Dallas more than makes up for that.

Its location allows for day trips to other large cities, which keeps residents happy when they want to take a little vacation.

The many cultures that make up Corrollton result in a diverse population and all different kinds of cuisine. Carrollton is a very open and accepting city.

If you’re passing through Northeast Texas, Carrollton is a must-see.

The people who live there are chock-full of Southern hospitality and you’ll feel right at home no matter where you’re from. Walk into any establishment and you’ll be greeted like family.

Be careful stopping by, though- you might want to move in!