Pick some fresh apples on this historic orchard before taking a high-thrill dive down the waterfall.

The Arizona Government fought hard to acquire Slide Rock State Park for public use, and for good reason.

This incredible gift from nature will put a smile on anyone’s face and you’d be a fool to pass it up while traveling through Arizona. 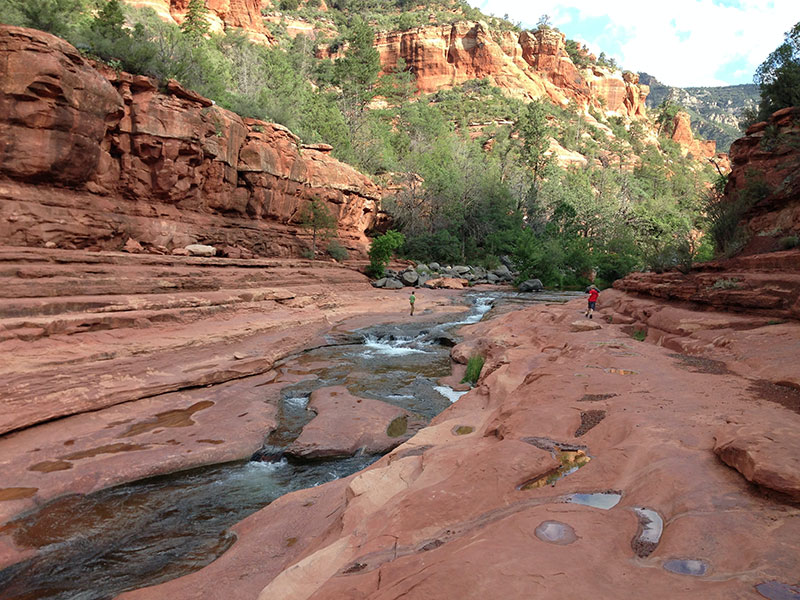 What is Slide Rock?

It is one of the few homesteads still standing in the canyon and represents a deep past of agriculture in Central Arizona.

There are historic cabins to view, and the creek has a fun slide for the more adventurous visitors.

The slide is 80 feet long and gets up to 4 feet wide. There is a 7% decline from top to bottom. It’s slippery because of the algae on the rocks.

There’s a pool at the bottom of the slide where you can swim, and you can also explore the creek.

In the early 1900s, a man named Frank Pendley had a large apple orchard and grew vegetables on the land south of Slide Rock.

His son kept operating and managing the property, and by the 1980s it was one of the biggest pieces of land in Oak Creek Canyon that was private property.

In 1982 the family decided they wanted to sell the property, so the governor contacted them to see if the state could buy the land and turn it into a State Park. At first the family was reluctant, but after two years of negotiations the land was bought and converted into a state park.

Renovations were made, entrances were built, roads were paved, and more. In October 1987, Slide Rock State Park opened to the public.

Where is Slide Rock located in Arizona?

Its exact address is:

Is Slide Rock open? Is it open year-round?

Slide Rock is open year-round, with the exception of a few holidays.

It also sometimes closes due to high bacteria counts.

What time does Slide Rock close?

Here are the closing times of Slide Rock: 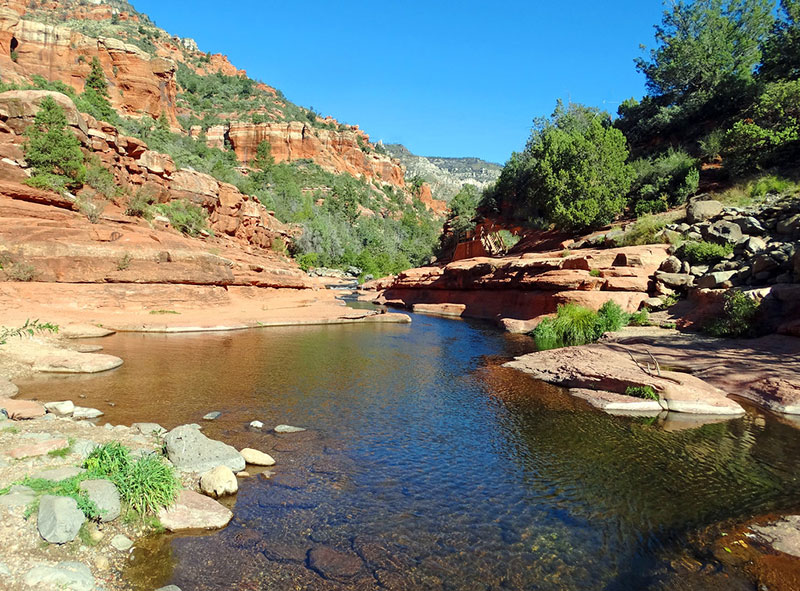 Do you need reservations?

You can reserve one or both of the two covered ramadas, except between the Friday before Memorial Day through the end of Labor Day.

Each ramada is $75 to reserve, along with a $5 non-refundable reservation fee.

Reservations are not needed to visit the park.

Is there an entry fee for Slide Rock?

Below are the entry fees:

Motorcycle fee is 50% of per vehicle fee.

You can pay with Visa or MasterCard. Cash must be exact change.

Here are the average lows and highs of Slide Rock, organized by season:

What is the best time to visit Slide Rock?

The best time to visit Slide Rock is early when it opens or during the off season.

The parking lot is limited, and parking on the main road is prohibited.

Slide Rock is incredibly crowded during the summer.

However, there are some local secrets such as entering Oak Creek from different locations.

The Verde River is also about 30 minutes away, where you can rent a tube and tube down Oak Creek if the park itself is too crowded.

Can you swim in Slide Rock?

The pool at the bottom of the rock slide is eight feet deep, which is plenty deep enough to swim.

Children under 7 need to slide down the rock with an adult.

There are no lifeguards on duty so swimming is at your own risk.

However, all of the activities are fun for kids as long as they are appropriately supervised.

Have there been any accidents at Slide Rock?

Once, a man got injured when a boulder rolled on top of him as he was climbing up the rocks.

He accidentally loosened the several hundred pound boulder, which kept rolling down the hill next to the creek after hitting him. He suffered multiple injuries.

Besides large accidents, people often scrape their feet while sliding down the rocks. The rocks are also very slippery due to algae, so it’s easy to fall.

Flash floods and heavy storms can overload the creek with fecal contamination, so Slide Rock occasionally closes due to high bacterial counts. It usually happens about ten times a year.

The creek clears up in a few days on its own.

Can you cliff jump on Slide Rock?

There are three cliffs ranging from 10 feet to over 50 feet where you can cliff jump.

Can you bring dogs?

Dogs are not allowed in the swim area.

Two other rules surrounding dogs include:

Can you bring alcohol?

Alcohol is allowed at Slide Rock but you can’t bring glass into the swimming area.

Are there fish in Slide Rock?

There’s no fishing in the park itself, but if you take a hike north there is amazing trout fishing upstream. Both wild brown and stocked rainbow trout can be found there.

Can you camp at Slide Rock?

Just south of Slide Rock, Manzanita Campground is a year-round, tent-only campsite. It has wonderful fishing and swimming holes on Oak Creek.

It has paved parking and is easy to access. It consists of single-family campsites that are relatively near each other.

Each campsite has a grill, campfire ring, and picnic table. There are campground hosts to help you with any questions and you can purchase firewood at the campground.

Here are some vital tips for visitors:

What to bring to Slide Rock

Here are some must-brings to Slide Rock:

Where do you park at Slide Rock?

The address for parking is the same as the address as the park:

The parking lot fills up quickly and you can’t park along the main road so show up early if you’re visiting during peak season.