What comes to your mind when you think of Maine? Scenic country roads? Forests? Seaside villages? Or most likely- lobster?

Maine deserves more recognition than it gets. With one of the most popular national parks in the entire country, diverse ecosystems, friendly neighborhoods, beautiful hiking, luxury seaside hotels, and more, there is truly something for everyone.

Maine is a complex state with a lot to explore. Let’s take a road trip through Maine, observing the most interesting things the state is known for. 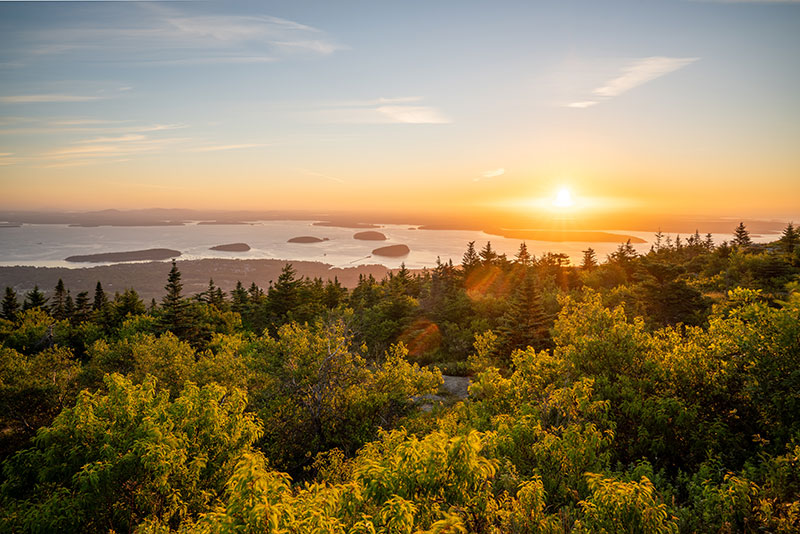 Acadia National Park is a famous 27,000 acre park. Despite being the fifth smallest national park, it is one of the top 10 most-visited national parks in the United States, averaging 3.5 million visits per year.

The park has an abundance of wildlife along with ponds, lakes, rocky coastlines, and granite mountains. It holds 26 distinct mountains.

Cadillac Mountain is the tallest mountain on the Atlantic Coast. From October 7 through March 6, it is the first place in the U.S. where the sun rise is visible.

Little Moose Island, a beautiful 54-acre with a fragile habitat and a large number of nesting birds, can be reached via a land bridge at low tide.

Snowfall averages around 60 inches each year! 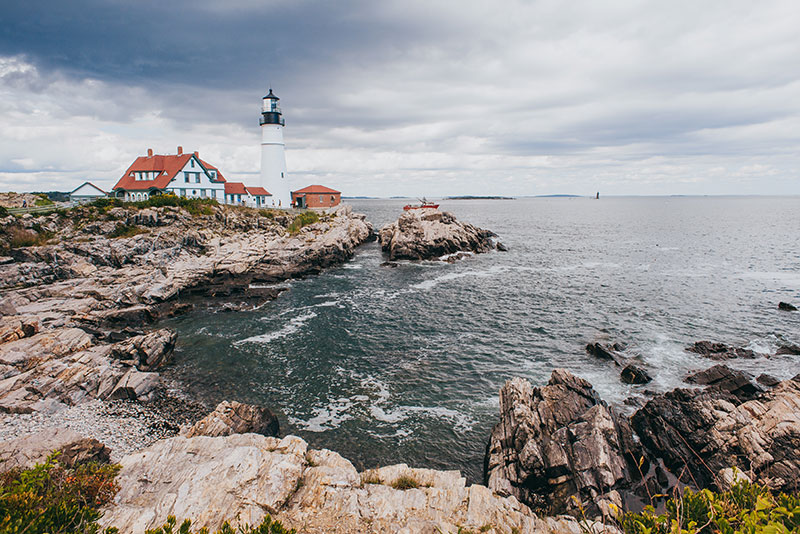 Maine lighthouses have helped ships navigate the seas at night for over two centuries. Many of them are still in use today and double as an unforgettable experience.

The state has 65 lighthouses. Many are open to the public, and in some you can even go to the keeper’s quarters!

A lot of them have small museums attached so you can learn about their history while visiting.

The wild blueberry, otherwise known as the low-bush blueberry, is a Maine native and flourishes in the glacier-churned soil and changing seasons of Maine.

Maine’s wild blueberries are the second most pollinated crop in America!

Despite being smaller, they have twice the antioxidants than typical blueberries you find in the grocery store. They are also more flavorful, and have a wide variety of flavor, because they aren’t all uniform. 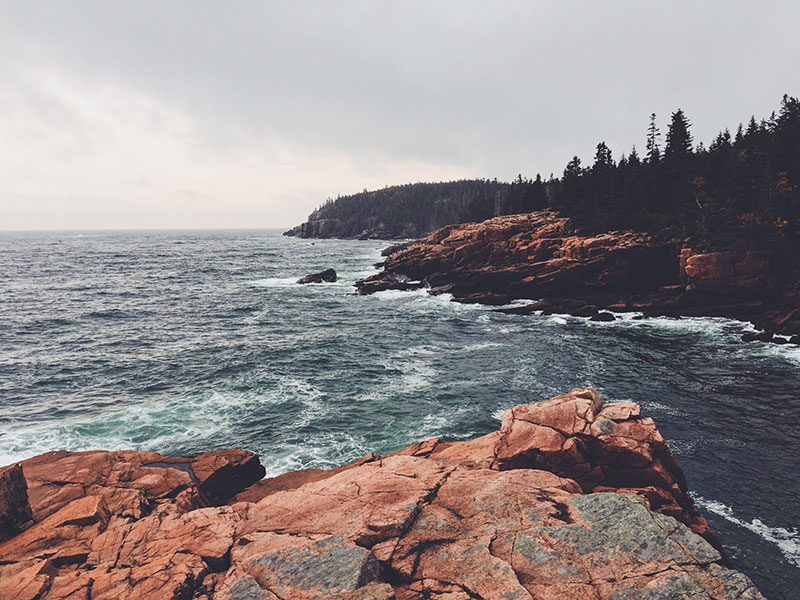 Maine has 3,478 miles of coastline- that’s more than California!

The first 30 miles of coastline are considered the Southern Maine Coast Region and make up 90% of the state’s sandy beaches.

Mid-Coast Maine has a rugged coastline with many lighthouses and charming seaside villages.

Keep traveling up the coast and you’ll reach what the natives call Down East. This is where Acadia Park resides.

Moxie was designated as the official soft drink of Maine in 2005.

The soda was invented in 1884 by a Maine native named Dr. Augustin Thompson and is one of the first sodas to ever be produced.

Moxie is sweet and bitter due to its gentian root extract. Lobster is seen as a luxury food item, and Maine lobster is imported all around the world. But what makes it so special?

Maine lobster gets such a sweet flavor because it lives in incredibly cold waters. The lobster season is typically from late spring to late fall, but some fishermen brave the freezing temperatures in order to catch the best lobsters.

Maine lobster is distinguished from the tropical spiny lobster because it has large, heavy claws.

Maine provides almost 90% of the country’s lobster supply- about 40 million pounds each year.

Stephen King was born in Portland, Maine and used many Maine towns as backdrops for his books.

Instead of writing about charming coastal towns, he wrote about country roads and old farmhouses in towns with small populations.

It’s not always easy to tell which Maine town King was writing about, and he often combined many towns in one story.

Some die-hard fans go so far as to create maps of his fictional towns!

L.L. Bean was the brainchild of Leon Leonwood Bean and started in 1912 in Freeport, Maine.

It started as a one-room operation selling nothing more than the Maine Hunting Shoe. Then Bean developed a waterproof boot which he sold through a mail-catalog, and the company only grew from there.

Now they offer all things outdoors, including hiking boots, backpacks, tents, and clothing. They even partnered with Subaru to create an L.L. Bean edition of the Subaru Outback and Subaru Forester.

They also have educational programs via many of their retail stores that provide instruction for outdoor activities, with all equipment provided. 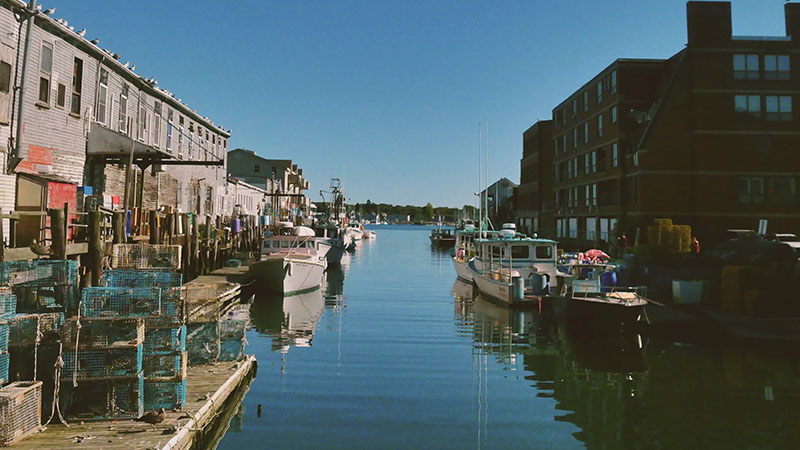 Many coastal villages in Maine rely on fishing as their main source of income. Some of these fishing villages are secluded, while others are huge tourist destinations.

Some well-known seaside fishing villages include:

Old Orchard Beach has a year-round population of about 9,000 which skyrockets up to 75,000 when it gets warmer out.

It has seven miles of beach where people surf, play frisbee, sunbathe, swim, and nap.

The Old Orchard Beach Pier was first built in 1898 and reached over 1,800 feet into the bay, hosting restaurants, shops, and a casino. Eventually storms got the better of the old pier, and the new one is a little shorter. But just like the old pier, it has lots of entertainment.

Portland is the largest city in Maine, holding nearly 25% of the state’s total population.

10% of the state’s lighthouses are located within 20 minutes of Portland. The city is an average of 5-10 degrees warmer than the rest of the state.

Portland has the most microbreweries per capita than any other city in the country!

Bar Harbor is the biggest town on Mount Desert Island. It is home to Cadillac Mountain in Acadia National Park.

It is also home of College of the Atlantic, a small, alternative, private liberal arts college.

Only 1,275 families live in Bar Harbor, but it turns into a famous tourist destination during the summers. Many businesses are seasonal. 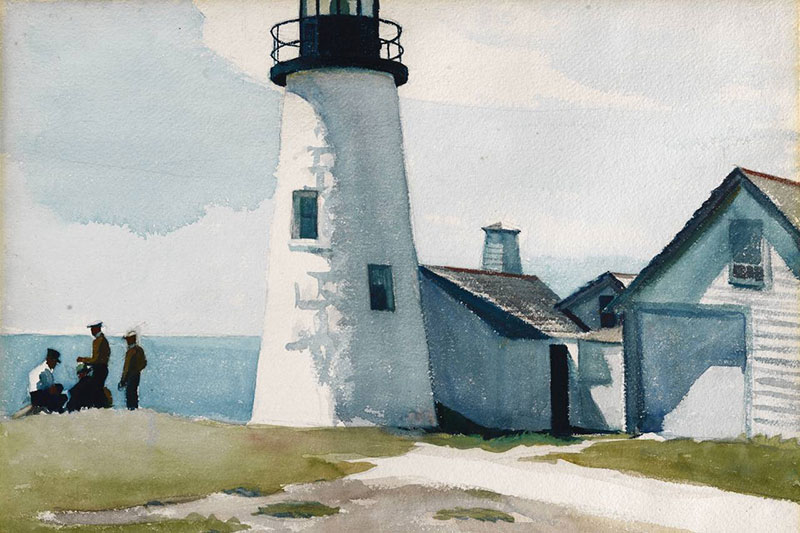 Edward Hopper is an artist who spent nine summers capturing Maine in paintings and watercolors in the early 20th century.

He used strong contrasts of light and shadow and often interpreted his subjects rather than painting them completely accurately.

He wasn’t afraid of letting the white of the page peek through. He enjoyed overlapping planes and obscuring one structure with another.

His paintings have a calm and bucolic feeling to them, some of them capturing snippets of villages with others focusing on big rock structures near the water.

It isn’t part of the Maine State Park system. Instead, it is governed by other Maine environmental agencies.

The park is home to three ponds and many lakes, with streams and rivers connecting them all.

The most common wildlife in the park are moose, black bears, and white-tailed deer.

Mt. Katahdin is located in Baxter State Park. It was named by the Penobscot Native Americans and translates to “The Greatest Mountain.”

Katahdin is the northern terminus of the Appalachian Trail. It is located near a section of trail known as the Hundred-Mile Wilderness.

Mount Katahdin was called a National Natural Landmark by the National Park Service in 1967.

The trails to the peaks of the mountain are eight to ten hour round-trips depending on how quickly you hike.

It has no trees and is where the Alland D. Cruickshank WIldlife Sanctuary is located.

It’s surrounded by huge granite boulders that create the perfect place for guillemots and puffins to nest.

The island is the home of the world’s first ever seabird colony to be successfully restored. Previously on the island, the nesting seabird populations were diminishing and eventually expired due to egging, hunting, and displacement.

Before being recolonized, puffins nested for the last time in 1885. Five pairs of puffins started nesting again in 1981 after populations were reintroduced, and by 2017 almost 200 pairs were nesting on Easter Egg Rock.

Maine is a severely under-rated state that is certainly worth a trip.

With everything from charming villages to rocky shores to the most famous point of the Appalachian Trail, Maine has more than meets the eye.

Feast on some freshly harvested Maine lobster and blueberries and fall in love with the natural flavors of the state. Explore the rocky coasts or take a trip to see puffins in real life.

Whether you have an adventurous spirit or like to go on luxurious vacations by the sea, Maine will welcome you with open arms!