Why do you travel?

If your answers include “experiencing the beauty of nature” and “seeking thrills”, then Beartooth Highway is the route for you.

This winding, two-lane, high elevation highway is a classic drive that people travel across the country to experience.

Do you want to push yourself to the limit in order to reach the ultimate views? A drive through Beartooth Highway is an experience you won’t forget.

What is the Beartooth Highway? 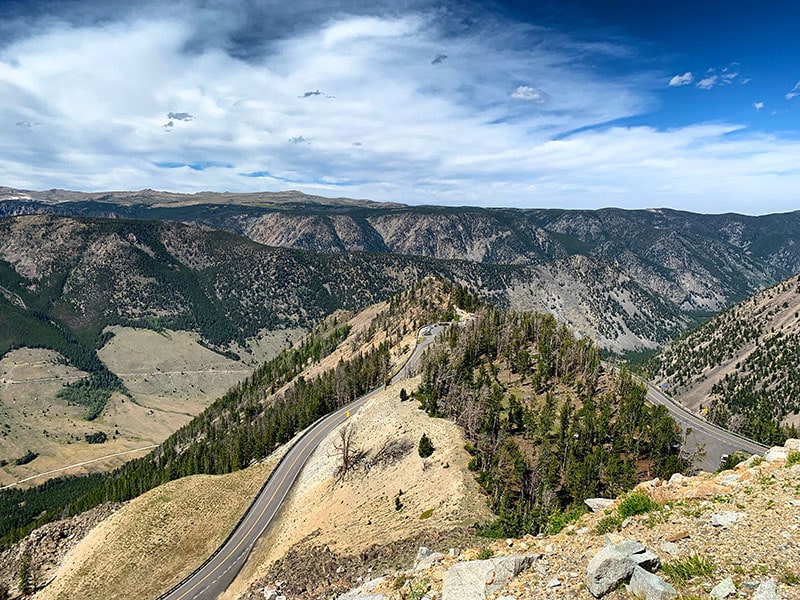 The Beartooth Highway is a National Scenic Byway that runs through parts of Montana and Wyoming. It is a section of Route 212.

CBS described it as “the most beautiful drive in America.”

Its height can definitely put you on edge, but its natural beauty will help calm your nerves. It winds through twenty scenic peaks, three National Forests, and 10,000 mountain lakes.

How was the Beartooth Highway built?

The pass was originally crossed by a general in the Civil War in August 1872, along with 120 men who had just finished an inspection tour of Yellowstone National Park.

Instead of taking the long way down the Clarks Fork Yellowstone River, the general followed the lead of an old hunter who knew the mountains well.

Around 150 workers built the road, which was originally gravel and only 14 feet wide. It took five years to build.

It was expected that the highest speed limit of the road would be 30 mph. Little did they know!

How long is the Beartooth Highway?

Where does the Beartooth Highway begin and end?

How long does it take to drive the Beartooth Highway?

It takes two hours of steady driving to make it through Beartooth Highway, but it can take up to a day or two if you stop to see all the sites and enjoy the hiking along the way.

What is the elevation of the Beartooth Highway?

Is the Beartooth Highway open?

The Beartooth Highway stays open from Memorial Day to October 15, depending on weather.

Snow can be found on the higher elevations up through mid-July.

In May and June, along with September and October, there will likely be winter temperatures and a chance of snow.

When does the Beartooth Highway close?

Beartooth Highway closes from October 15 to Memorial Day. It also closes due to unpredictable weather conditions, even in the summer.

You can check out this map to see road conditions before attempting the trip.

There was a year-long closure in 2005 after several rock slides and mudslides severely damaged the Montana side of the highway.

It cost $20.4 million to fix the construction and it is estimated that 100,000 cubic yards of rock were removed from a half mile long section of the highway. 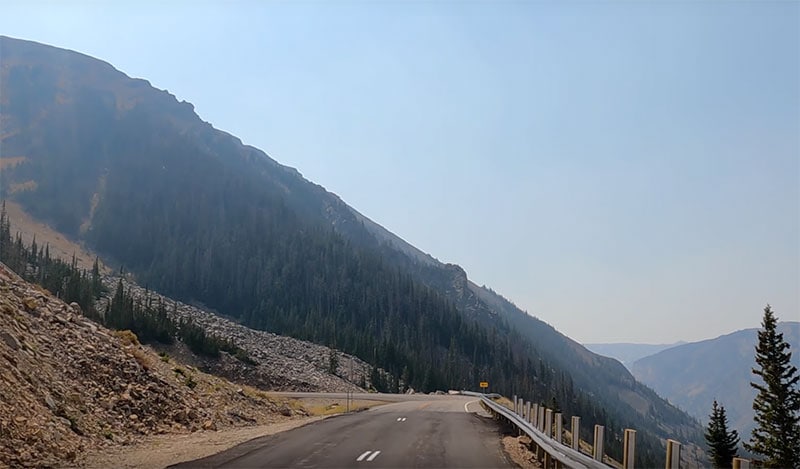 Beartooth Highway is not dangerous if you are cautious and don’t speed. However, some inexperienced drivers may find it intimidating because of the combination of narrow and twisty roads, tight switchback and sheer drop-offs.

Although it is twisty and curvy in some places, it is not particularly hazardous as there are guardrails to protect drivers.

How scary is the Beartooth Highway?

Does Beartooth Highway have guardrails?

There are guardrails where deemed necessary, but not along the entire highway. At sections where there are no guardrails, there is a very gradual slope on the mountain with no risk of dropping off.

Have there been fatal accidents on Beartooth Highway?

There have been fatal accidents on Beartooth Highway.

Once a motorcyclist drove off the right side of the road and died after falling down the rocks.

A passenger on the motorcycle was flown to a hospital after suffering injuries. They were heading north and neither of them were wearing helmets.

Is there a vehicle length restriction on Beartooth Highway?

There isn’t a legal vehicle length restriction on Beartooth Highway, but there are signs posted recommending that vehicles over 40 feet in length shouldn’t drive on the road.

Are RV’s allowed on Beartooth Highway?

There are no rules against RV’s, but most people who have driven the highway in an RV advise against it. Locals also hate when RV’s drive on Beartooth Highway.

If your RV is large then you will have trouble making the turns, you need a lot of power to drive up the inclines, and you need good brakes to make it down the declines.

The general consensus is that your best bet is to park your RV and rent a car to drive Beartooth Highway.

Does it cost money to drive on the Beartooth Highway?

There are no tolls on Beartooth Highway.

What is the speed limit on the Beartooth Highway?

Along the Wyoming/Montana border the speed limit on Beartooth Highway is 80 mph, but realistically you need to drive slower than that to make it around the turns.

This may seem unhelpful, but the best places to stop on Beartooth Highway will be spontaneous!

Yes, you can plan to visit the National Parks and charming Montana towns that the highway connects. But your most memorable experiences on Beartooth Highway will be unplanned.

Maybe you’ll see a herd of mountain goats, or a group of skiers. You could discover a hidden trailhead, or perhaps a scenic overlook that caught you by surprise.

Be prepared to explore and adventure!

If you’re looking to stay the night, there aren’t any hotels along the route (besides in Cooke City and Red Lodge). However, the Absaroka-Beartooth Wilderness lets you camp in certain areas.

Tips for driving on the Beartooth Highway

Here are some insider secrets to make your drive the best it can be!

Is Beartooth Highway worth it?

Withtout question, the Beartooth Highway is 100% worth it and it is one of the most breathtaking scenic routes youl will ever drive. It is on par with Going to the Sun Road in Glacier National Park.

Many people vacation in Montana just so they can drive this All American Highway.

If you visit around the third week of September, you’ll be greeted with awe-inspiring views of Aspen trees turning from green to gold.

And passing through three National Forests, you’d be hard-pressed not to be amazed.