If you are thinking about visiting Tampa and have some qualms about the safety of the city, we got you covered.

We are going to deep dive into the statistics, look at some maps, graphs and talk to the residents of the city to give you a better understanding of how safe Tampa really is.

Is Tampa, Florida Safe To Visit?

Statistically speaking, Tampa is a safe place to visit. In 2020, Tampa had a violent crime rate of 550.45 per 100,000 people. It’s violent crime rate is 1.4x greater than the national average and is on par with cities like Portland, Seattle and Fort Worth.

Here’s a scale to give you some perspective on Tampa’s violent crime rate:

Here’s a map showing you how violent crime has trended in Tampa over a 30 year period. 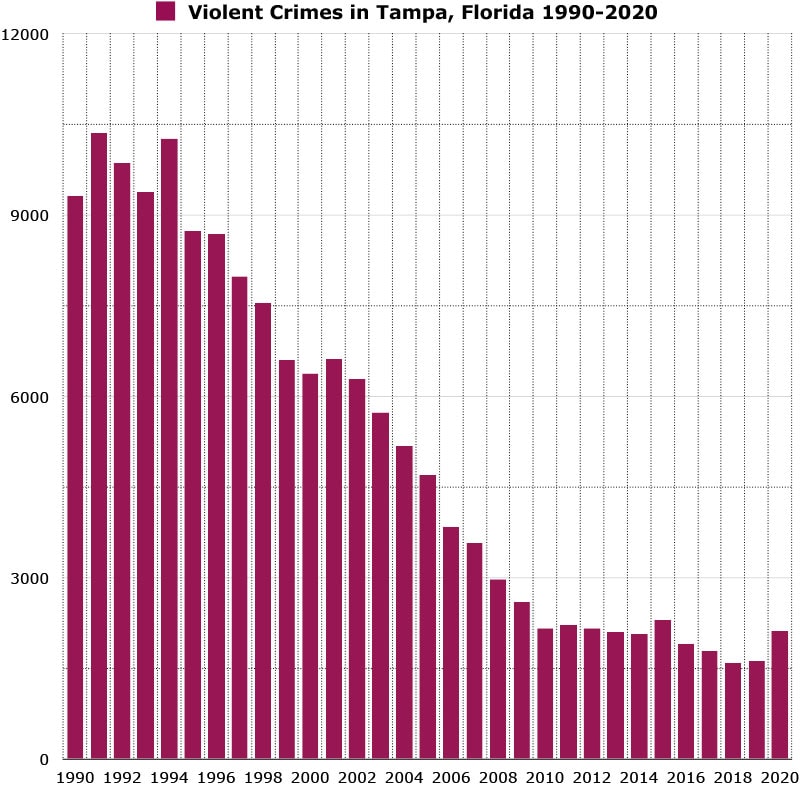 Here’s a map showing you how property crime has trended in Tampa over a 30 year period. 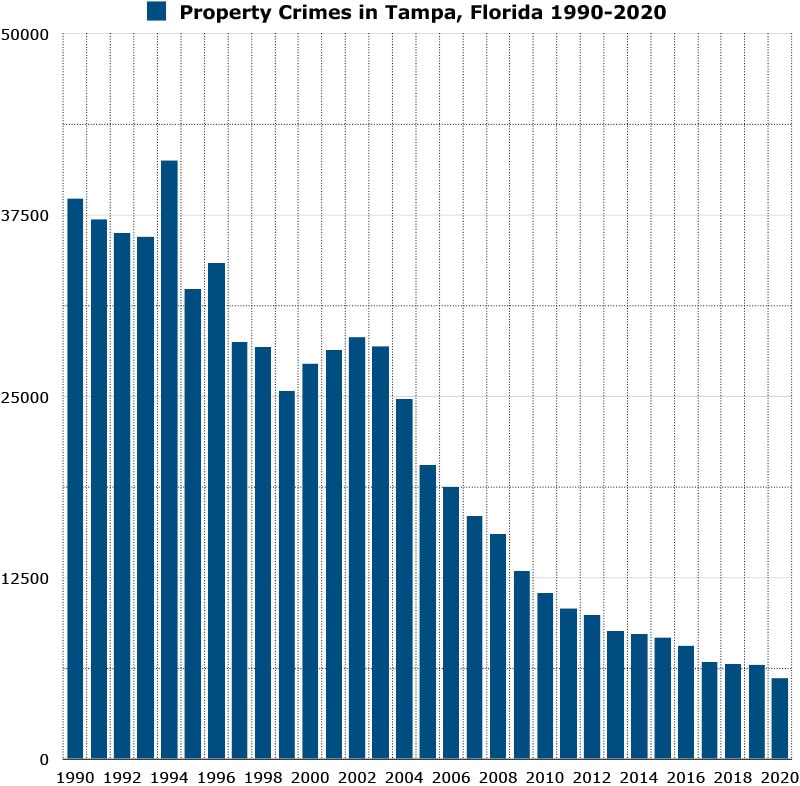 Here’s a map showing you how homicides has trended in Tampa over a 30 year period. 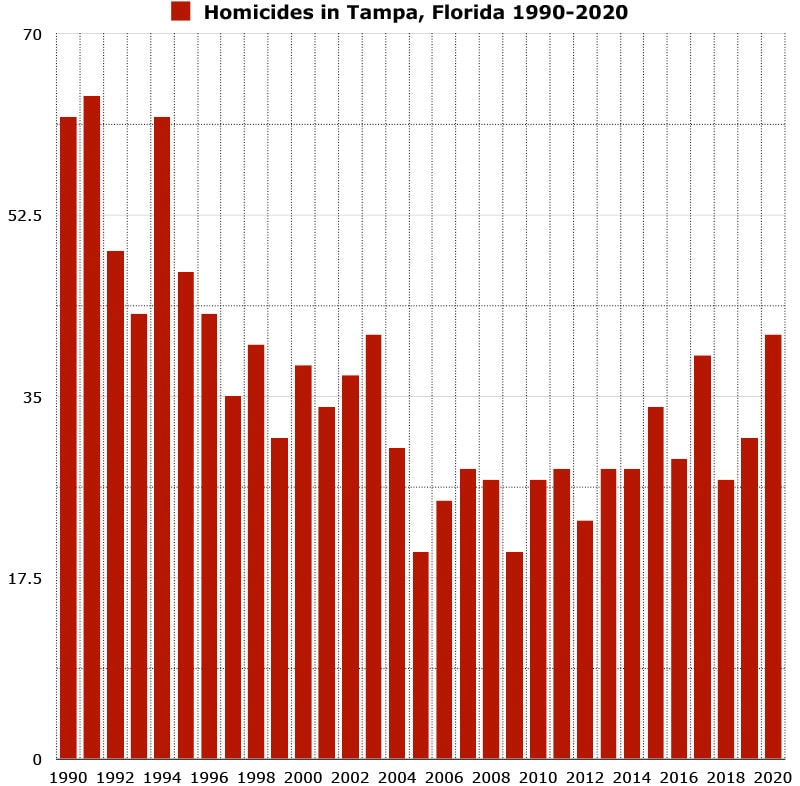 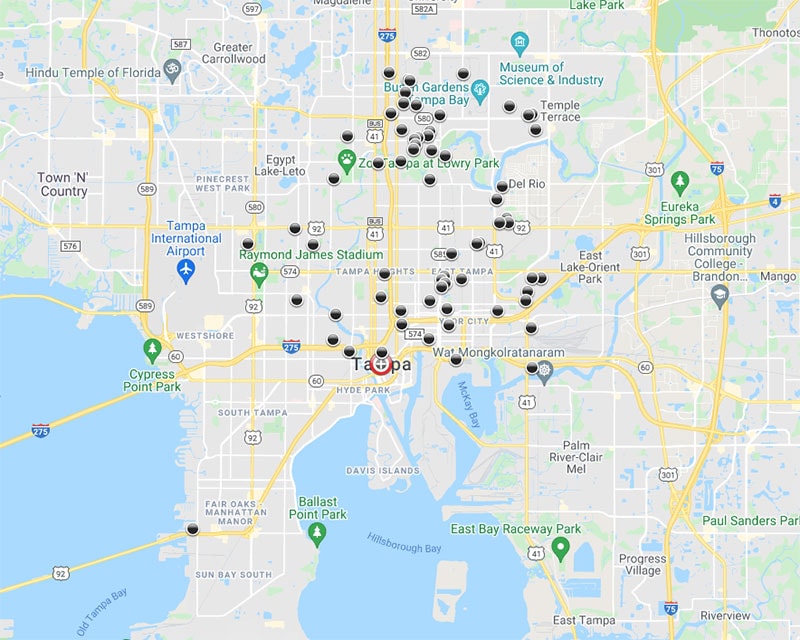 Tampa vs Other Cities In Florida 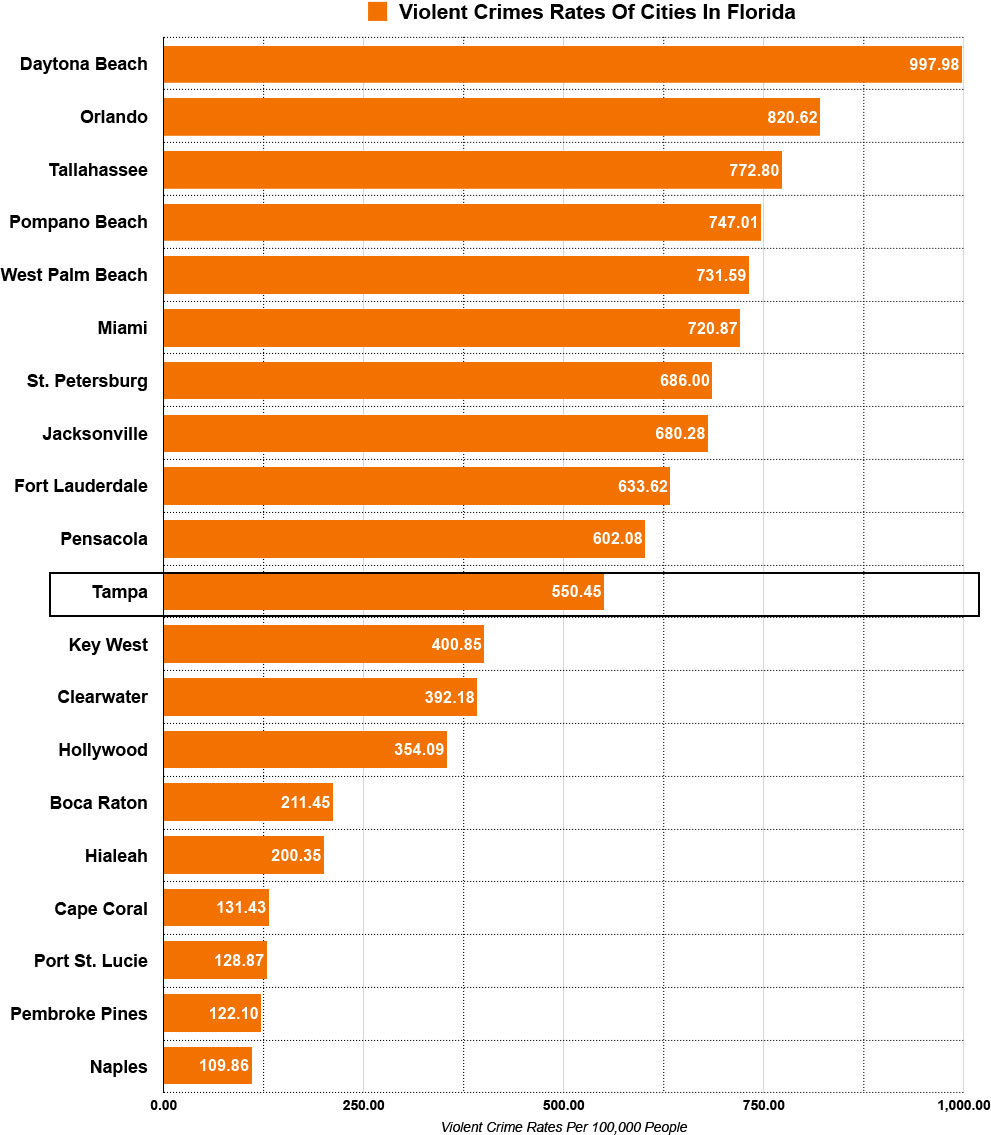 Tampa, Florida vs The Most Dangerous Cities in the United States 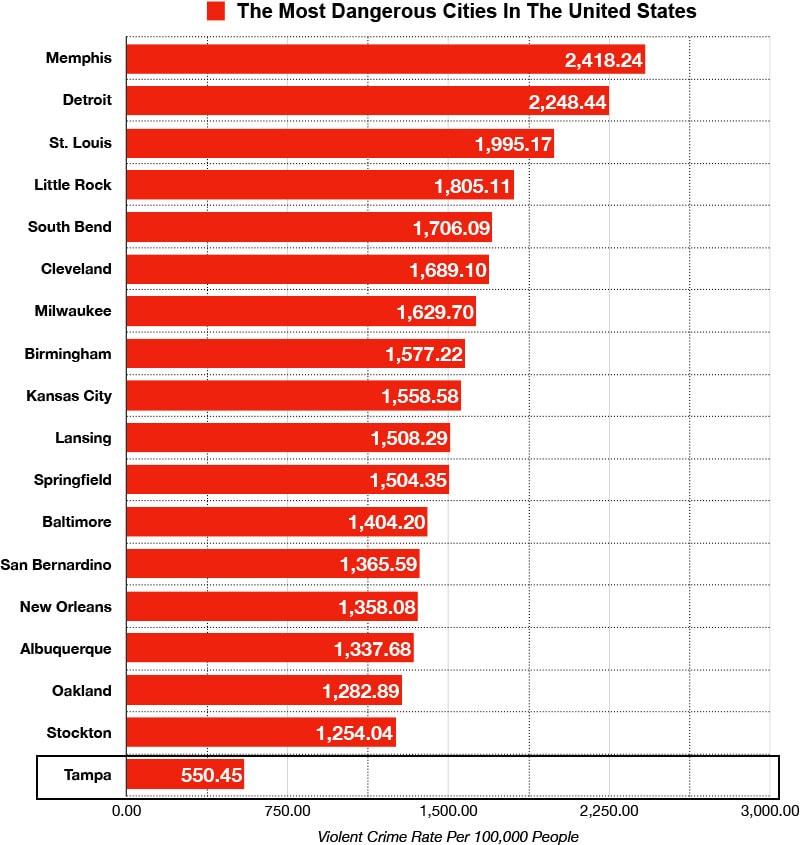 Most dangerous neighborhoods in Tampa 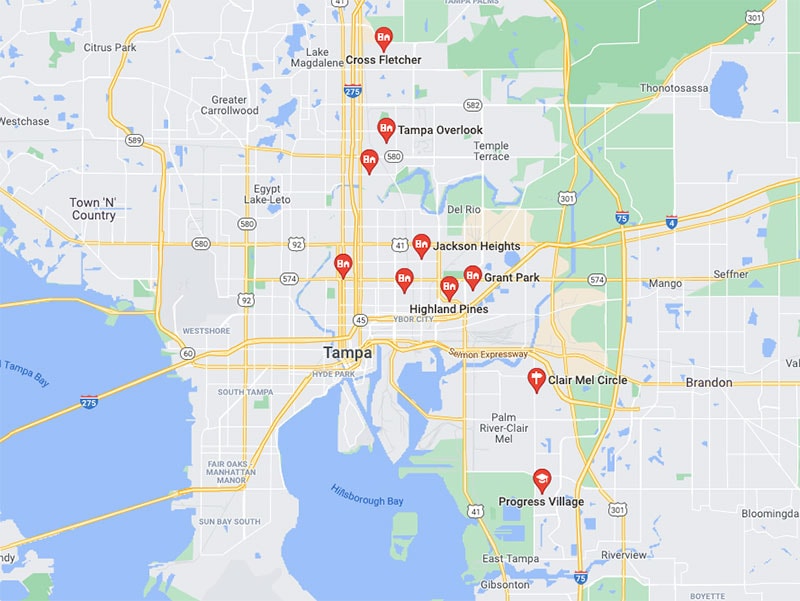 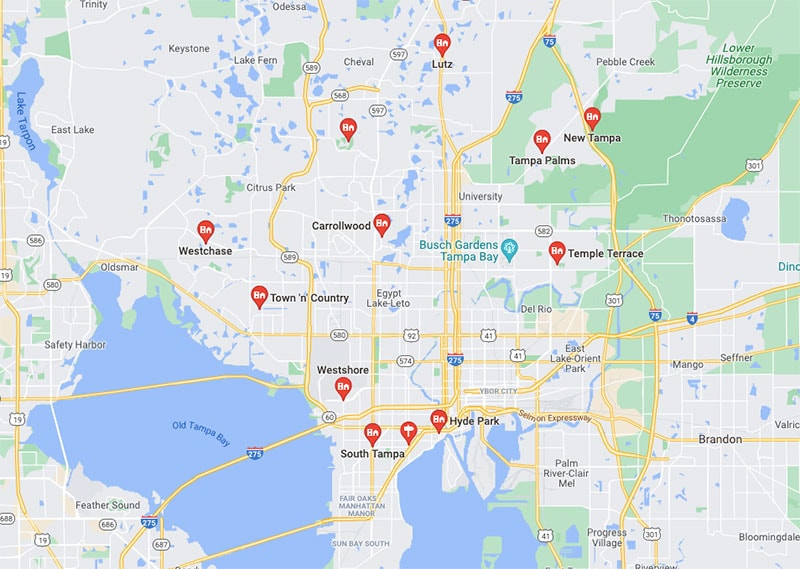 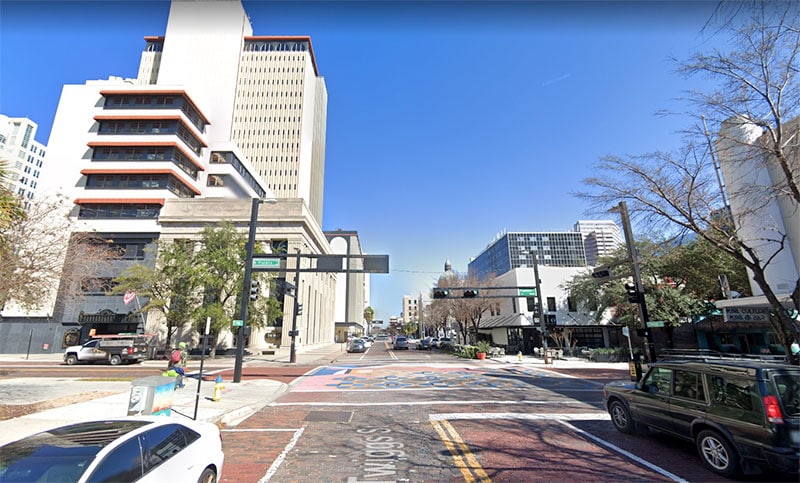 Downtown Tampa is generally a safe area to visit. At night we recommend that you take some precautions in regards to staying in well populated places, not straying off the beaten path and not walking by yourself at night.

The safest area in Downtown is along the Riverwalk. You should avoid places near the bus station (in front of The Hub, and Gaslight Park).

Many residents mention that Downtown Tampa is one of the least scary large-city downtowns they ever been in.

Is Tampa, Florida safe from hurricanes?

Tampa is susceptible to hurricanes due to its location on the coast and is something you have to take into consideration when visiting.

Historically, Tampa has been lucky in avoiding major hurricanes. The last major hurricane to hit Tampa was in 1921, which left in its wake, catastrophic destruction.

It should be noted that hurricane season does not mean a hurricanes will occurr. They are still rare events and it just means that it is highly unusual for any hurricane to occur OUTSIDE of hurricane season.

Is it safe to visit Tampa during hurricane season?

Is Tampa safe from tornadoes?

Tampa is not completely safe from tornadoes and is susceptible to them.

Tornadoes in Florida most often occur from March to May, according to the Florida Emergency Management Division.

Is the public transportation in Tampa safe?

The public transportation system in Tampa is handled by HART (Hillsborough Area Regional Transit Authority) and it offers many routes that interweave throughout Tampa and Hillsborough County.

What do residents of Tampa say about it’s safety?

Is Tampa safe for women?

Tampa is generally safe for female solo travelers as long as you learn the layout of the city, avoid problem areas, stay in well lit/well populated areas and avoid walking by yourself at night.

Is Tampa safe at night?

Tampa is safe at night as long as you stay away from the sketchy neighborhoods mentioned above. You should be able to mitigate your chances of being a victim if you study the layout of the city and avoid areas where crime is high.

The tap water in Tampa, Florida is safe to drink. In 2021, Tampa met or exceeded all state and federal drinking water standards.

While the tap water in Tampa meets the EPA health guidelines, it can still contain contaminants present in trace amounts that could potentially cause health issues over the long-run.

If you have any concerns about the tap water in Tampa, we suggest that you use bottle water for your drinking needs.

Things To Do In Tampa According To Locals 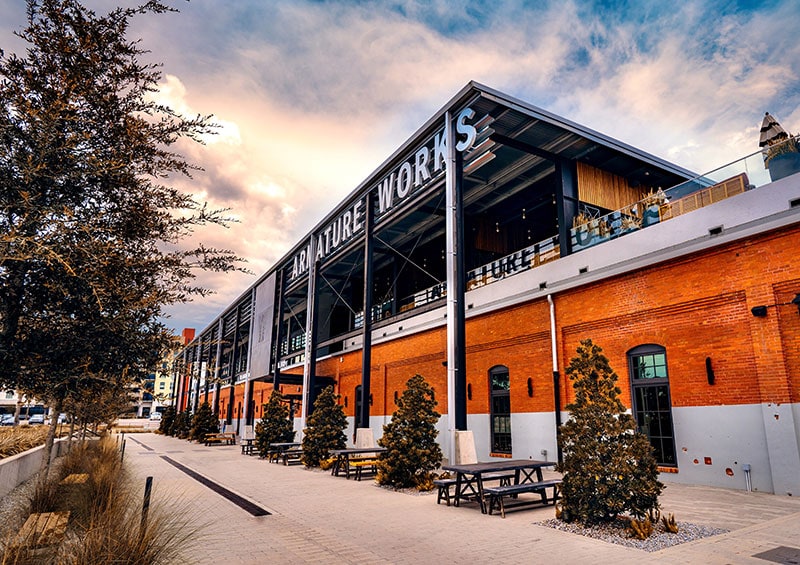