Stopping by Los Angeles? We don’t blame you!

But your trip would be for nought if you didn’t take the time to visit Compton, a city within LA that is rich with African American history and much to do.

Truthfully, even beyond this list, you’ll never run out of things to do in the Compton area!

Keep reading to learn about all the secret spots in and around Compton to get the best out of your travels!

The Spanish Empire expanded into this area after commissioning explorers to see the Pacific Ocean between 1542 and 1543. In 1767, it became part of the Provincia de las Californias, or Province of the Californias.

Exactly a century later, Griffith Dickenson Compton brought pioneers to the area via wagon train. They wanted to find a way to make a living besides working in gold mines. It became known as Comptonville, but to separate it from the Comptonville in Yuba County, it evolved to be simply called Compton.

The town was incorporated in 1888 with just 500 people living there.

In the 1950s, Black middle-class families started to move into the west side, and the city quickly grew. In 1969, Compton elected the first Black mayor out of any metropolitan area in California.

Where is Compton? How far is it from major cities? 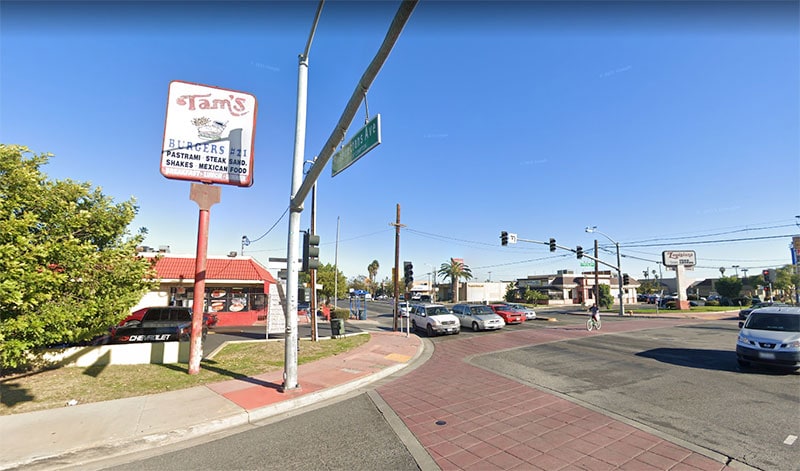 Compton is a city in southern and downtown Los Angeles.

Let’s explore Compton and its surrounding area to find the best spots to visit! This Compton bucket list is complete with parks, museums, restaurants, and more. 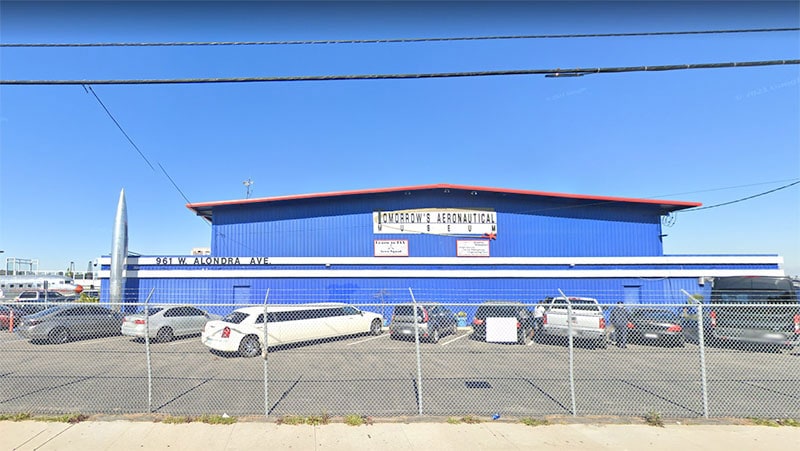 Tomorrow’s Aeronautical Museum is a living classroom that brings the history of aviation to life and empowers the dreams of young ones who want to take flight.

They have interactive exhibits exploring racial diversity and how modern flight evolved. In addition, they have a flight academy and STEM after-school programs (science, technology, engineering, and math),

This is a meaningful alternative to getting into trouble with violence, gangs, drugs, and other activities that are self-destructive. 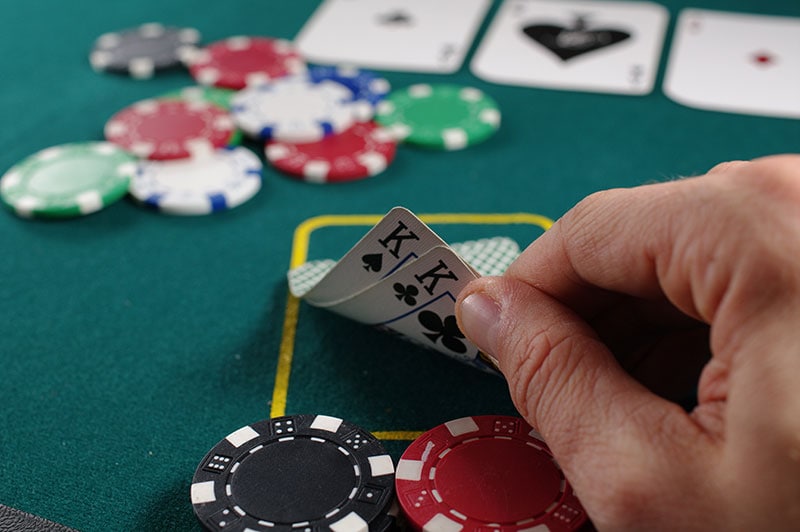 The Crystal Casino has over 35 tables of the absolute best games out there such as Spanish 21, Fortune Pai Gow Poker, Free Bet Blackjack, No Bust Blackjack, EZ Baccarat, and more! If there’s a game you want to play, they have it.

You truly have a chance to win plenty of money- thousands of dollars, to be exact- with their daily drawings and promotions.

Most importantly, Crystal Casino has an incredibly intimate setting that will make you feel at home while you have fun- and make some bucks! 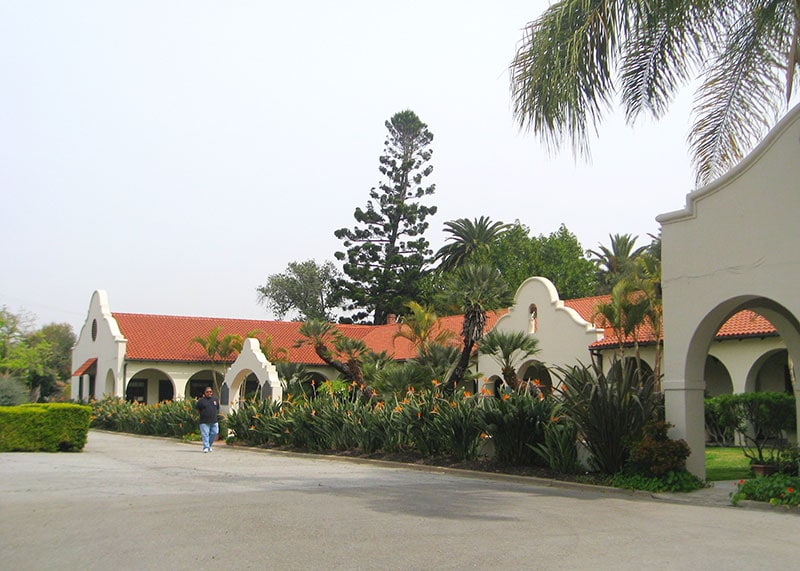 The Dominguez Rancho Adobe Museum is on the National Register of Historic Places- California Landmark number 152.

It’s surrounded by 17 acres of overflowing gardens and greenery on the Rancho San Pedro, part of the very first Spanish land grant in California. The original ranch was finished in 1826.

The museum interprets the history of early California through the eyes of the Dominguez Family. 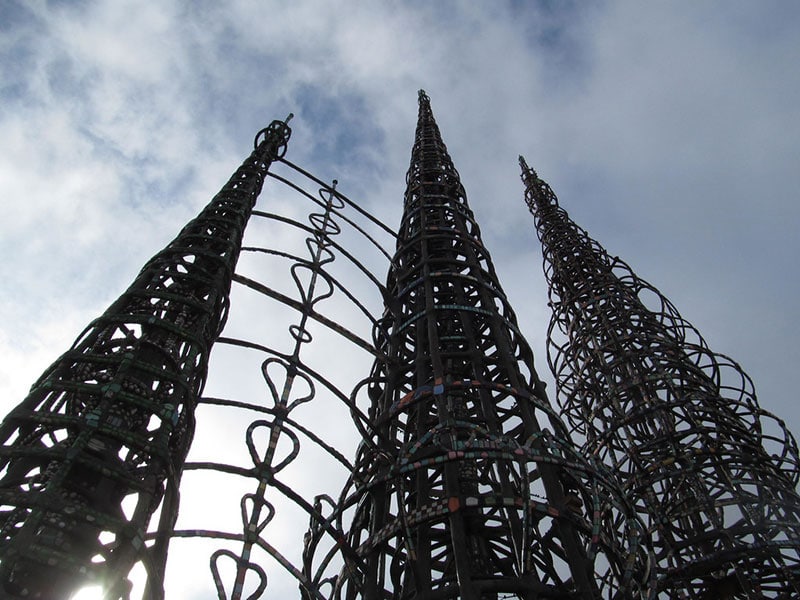 The Watts Towers- otherwise known as Nuestro Pueblo which translates to “our town” in Spanish- are a collection of 17 sculpture towers, individual sculptural features, mosaics, and architectural structures. They reside on the artist’s original residential property. 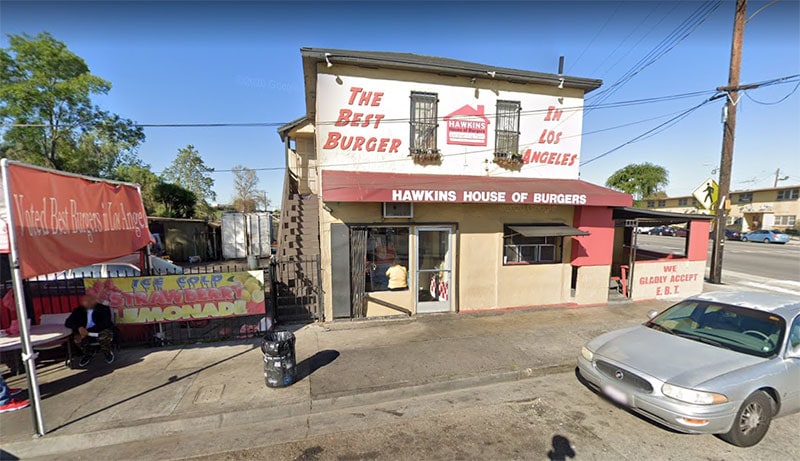 Hawkins House of Burgers calls Watts, California home and serves up ‘The Best Burger in Los Angeles’. It’s a little hole in the wall, but the burgers huge and taste homemade/fresh.

Veggies are purchased and prepared each day to maintain the utmost freshness. Good look finding steroids or antibiotics in their meat (hint: there aren’t any!)

They’ve been around for decades and the owner, Cynthia Hawkins, will make you feel like you’ve been best friends forever.

Tip: Get the Hot Link Burger. 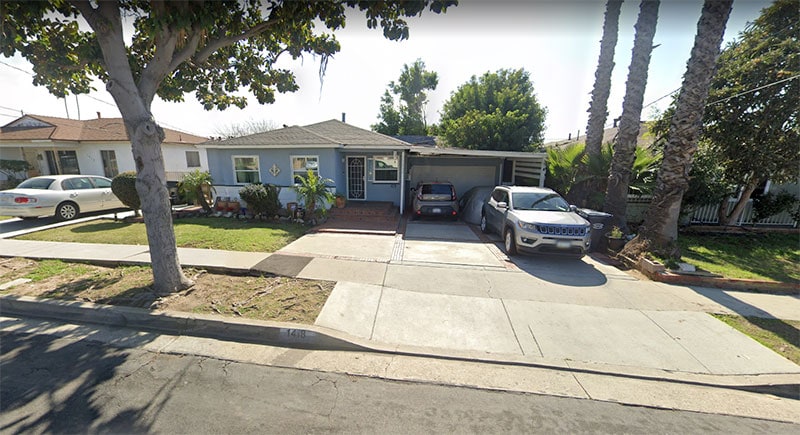 The “Friday house” was home to Craig Jones, where he and Smokey spent most of their time smoking on the porch and watching the world go by.

Friday is a 1995 stoner movie featuring Ice Cube and Chris Tucker- Craig Jones and Smokey, respectively. The film revolves around the two best friends- both of them unemployed- who need to pay a drug dealer by Friday night.

The movie made over $28.2 million on a shoestring budget and developed a huge cult following. 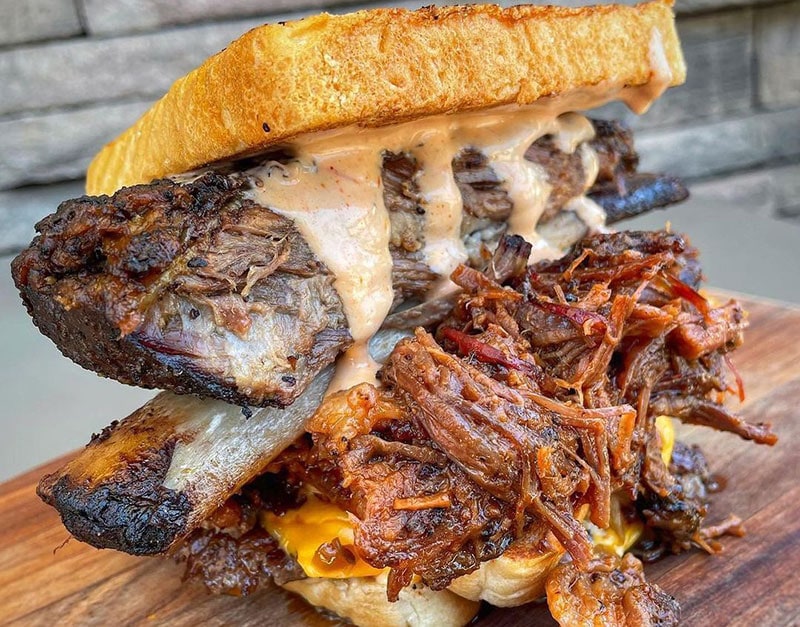 Smoke and Fire boldly states: “Comfort food is our obsession.”

They have a mission to be a community cornerstone- more than just a restaurant. They feed the soul, not just the body, and quickly become a home away from home.

The team started their journey at top dining institutions as hospitality associates. They range from specializing in billion dollar restaurant groups to local eateries. They have nearly two decades of experience and have opened restaurant concepts across the country.

They are proud of the fact that they haven’t just created a company- they’ve started a family. 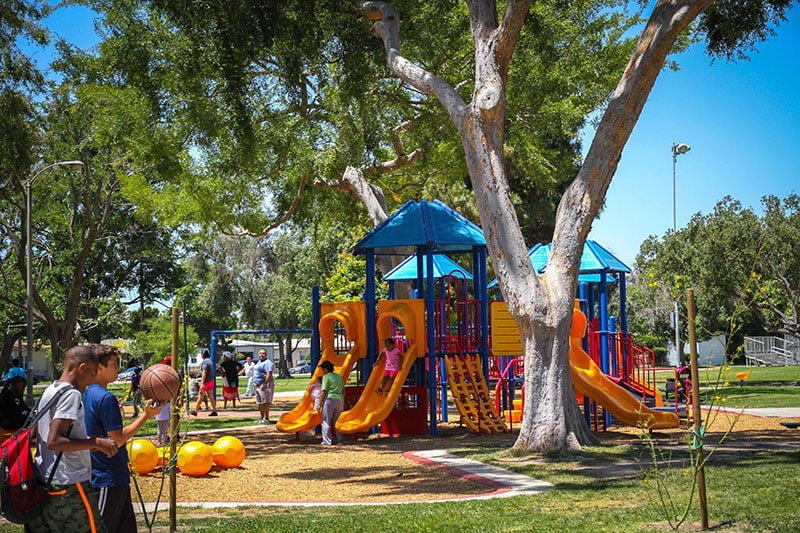 The name of this 28-acre park pays homage to the founder of the Watts Labor Community Action Committee.

All year long they offer activities like soccer, basketball, flag football, and baseball. 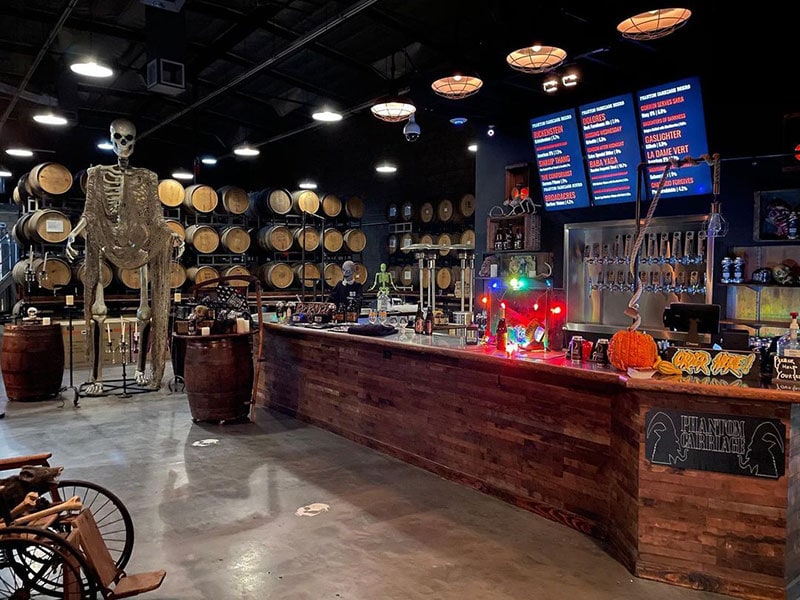 Phantom Carriage is a beloved 1921 Swedish horror film- and a Craft Brewery and Eatery!

Both versions of Phantom will make you ponder life and death, pleasure, satisfaction, comfort, desire, and fear- as you’re surrounded by a low-light barrel cellar and intriguing decor dedicated to sci-fi and horror cinema!

Phantom Carriage carries a huge array of craft brewed beers to perfectly compliment incredible housemade food. Your favorite dishes can be found reconstructed and reimagined at this show-stopping brewery.

Unlike many breweries, their selection is constantly changing and evolving. No need to understand confusing beer jargon- the staff is overjoyed to share their knowledge with you.

Eatalian has been serving the Compton area since 2006 and isn’t stopping anytime soon. They produce high-quality products, and it is a cozy place where you can watch them turn mere ingredients into artisanal food through a glass window.

Then, they use traditional cooking methods with imported ovens and open stoves. Finally, they serve delightful cuisine to their patrons in a modern dining room, with the plate being the main focus. By letting the guests see the chefs do their thing, they show a deep passion for their craft without needing to share a language.

Their devotion to top-quality means that small batches are carefully prepared in traditional ways by trained Italian chefs. 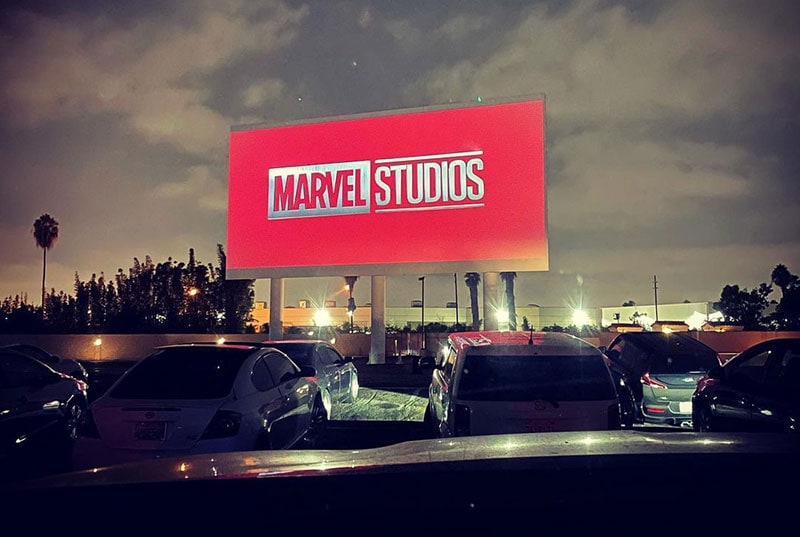 There isn’t a better drive-in anywhere near, or maybe anywhere at all!

Playing films like jackass forever, Blacklight, Moonfall, Uncharted, Dog, The Batman, and more, there is truly something for everyone.

There are designated back rows for larger vans, trucks, and tall SUV’s, so everyone has a spot at this theatre. Movies are shown rain or shine!

Here are the ticket prices: 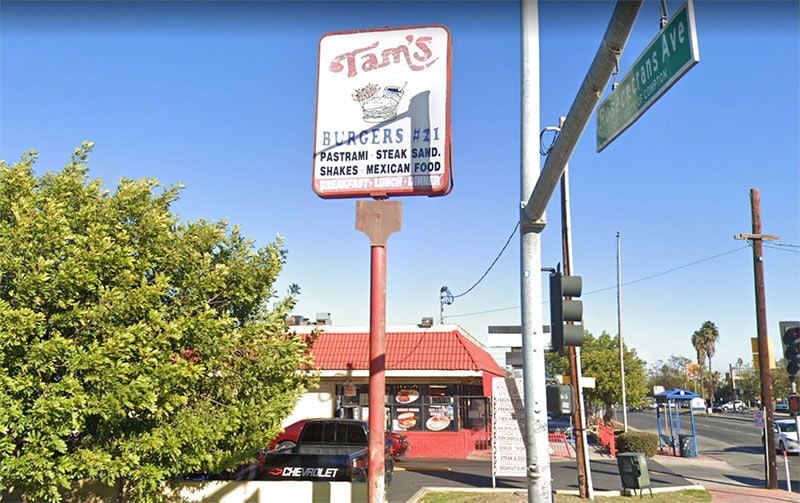 Tams is an institution of the city. It’s an old school burger spot that holds a special place in the hearts of many residents. You can’t go wrong with the burger and the chilli cheese fries. They also have tons of other great options including breakfast, lunch and dinner. Whatever you stomach is craving, they probably have it.