Riverside is the most populous city in the area, sitting 50 miles east of the massive Los Angeles, though sometimes considered part of “Greater Los Angeles.” It’s the home of California’s citrus industry and still has two of the original navel orange trees planted in California. Today, there is another quenching industry that seems to run the city.

There are 65 breweries between the two counties that are keeping Californian beer drinkers sated. But how to limit them down to a manageable visit?

Here are the 9 best to visit in the Riverside area: 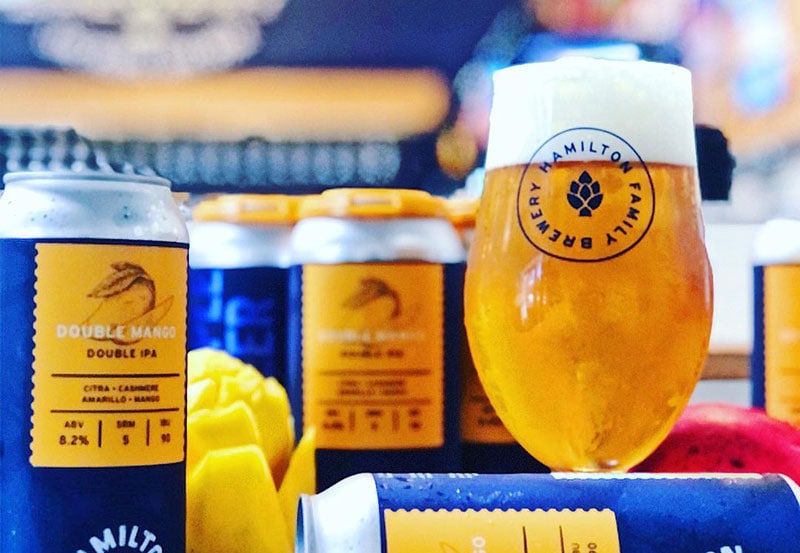 It should be obvious by the name, Hamilton Family Brewing prides themselves on being a family brewery. Their motto is “Love people. Love beer.” Based in Rancho Cucamonga, they were the first craft brewery in town, first opening their doors in 2014.

They regularly produce new beers which tend to play with fun natural flavors from hops as well as alternative additions like mint or maple.

Their tasting room is open every day of the week and is dog friendly. Choose from one of 24 beers on tap.

They plan different food vendors every day at their tasting room, each of which are local. From burgers to tacos to pizza, you can pair your beer with the perfect meal. If it’s a night there isn’t a food truck around, you’re welcome to bring your own grub. 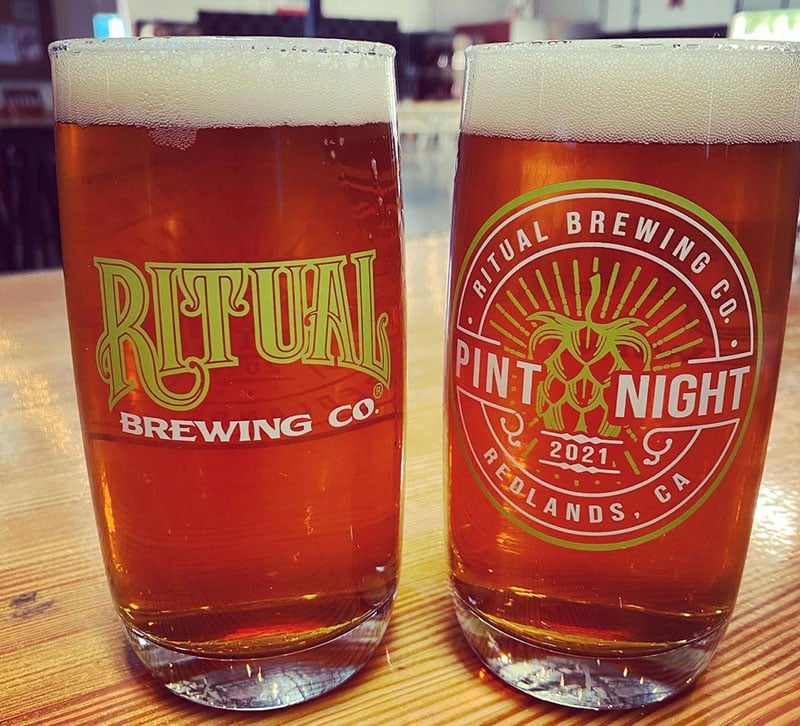 Founded by partners Steve and Owen, Ritual is a blend of avid homebrewer and industry veteran coming together to practice their favorite ritual.

In Ritual’s taproom, you’ll find 24 beers on draft in a space that screams industrial brew house. You can order a flight to taste a bunch of their beers and sit at one of their long, communal tables made of repurposed bowling alley lanes or enjoy the weather in their large beer garden, framed by bright murals.

There is not food served at the brewery, so you’ll have to keep that in mind when working your way down their tasting list. 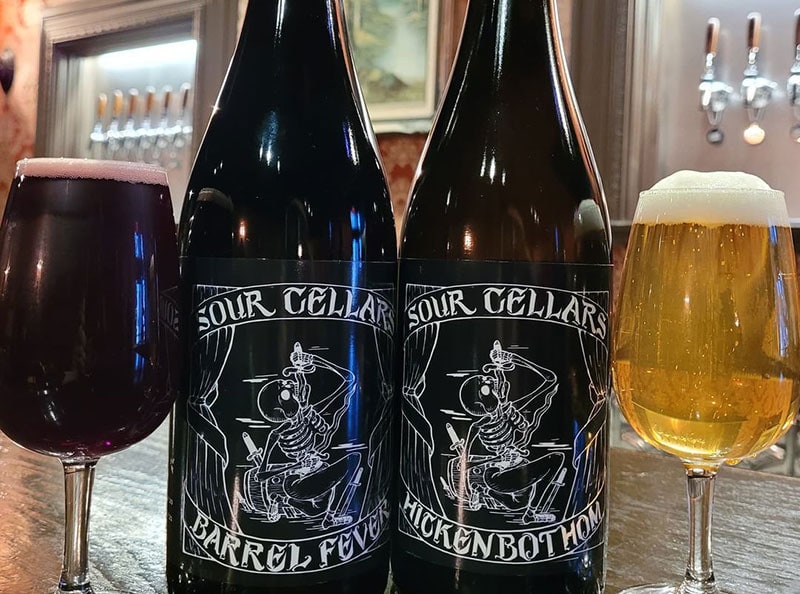 Sour Cellars has been in operation since 2014. If you didn’t notice, they have a theme: sours. They have more than 300 oak barrels that they use to age each beer for at least a year. They also propagate their own yeast, maintaining over 20 different strains.

Their tasting room, open Thursday through Sunday, has a Victorian speakeasy vibe with views of some of the oak barrels.

There are 12 taps to choose from when drinking in, and yes they do have the option for non-sour beers. Feeling peckish while you sip? 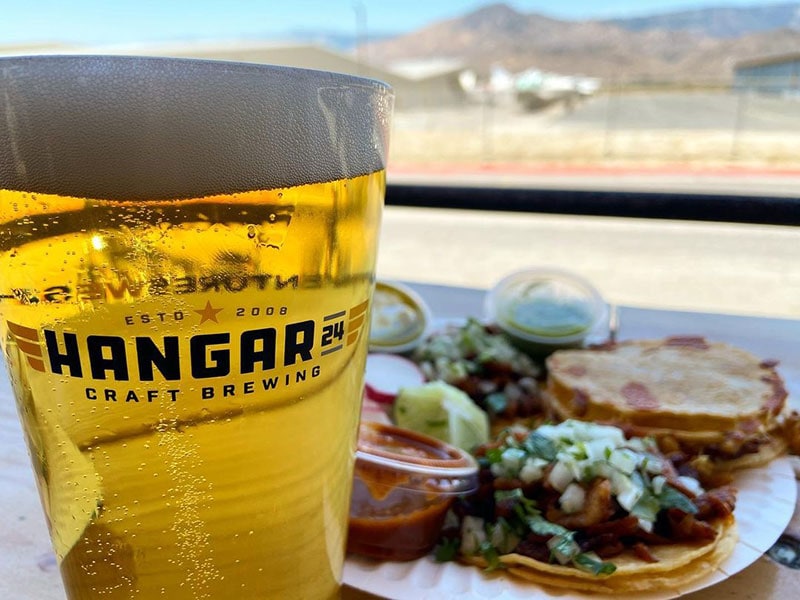 Hangar 24 is an American dream, mixing two beloved crafts: aircraft and craft brewing. It’s named after the founder’s favorite place to hang out with his friends at the Redlands Municipal Airport.

Hanger 24 offer a core range of beer, limited releases, and a “barrel roll” – their range of aged beers. They have four different locations, three of which are taprooms to drink at in Redlands and Irvine, California and Lake Havasu City, Arizona.

In their Redlands taproom, you can actually see where the beers are made, as it’s also home to their actual brewery.

Open every day of the week, their tap list is regularly updated online so you can plan your pints in anticipation of visiting.

They have regular events like trivia and live music and a parade of visiting food trucks, alongside their own tacos, burgers, and salads. You can order the usual flight of four beers or step up your tasting experience and get the nine beer tasting wheel. 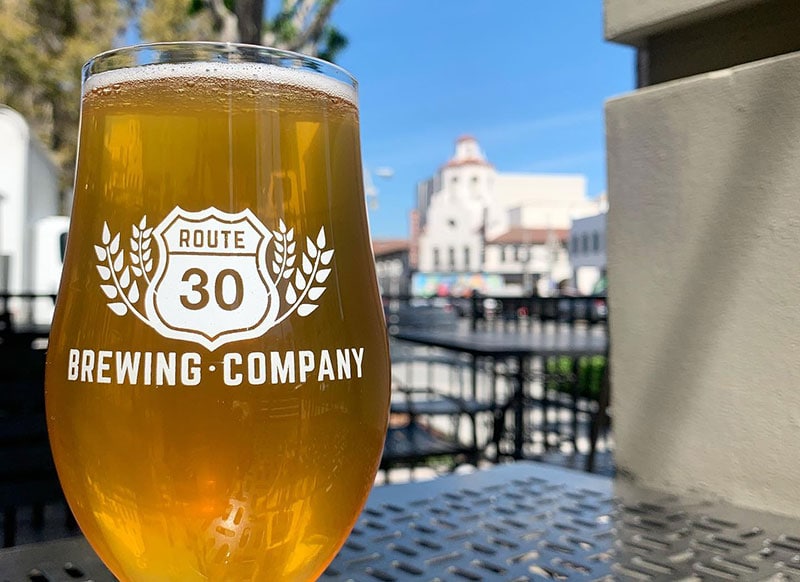 Route 30 lets their beer speak for itself. Mostly because we’re not sure why they’re called Route 30 – there are four different U.S. Route 30s in the country and none of them are in California. We suppose we’ll all have to go down to the taproom and find out for ourselves!

The mysteriously named Route 30 pride themselves on making craft beers with a modern taste. They even have a Members Only Benefits program for like-minded individuals who can benefit from special glasses, merch, and discounts.

Though neither are on Route 30, the brewery has two taproom locations. Only one has a small, outdoor space, but both are dog friendly and the insides are a nice, cool place to beat the heat.

They don’t serve food, but they do serve their house beers out of 15+ taps. Plenty to choose from, they also have the option between ordering a goblet, a pint, or a flight. 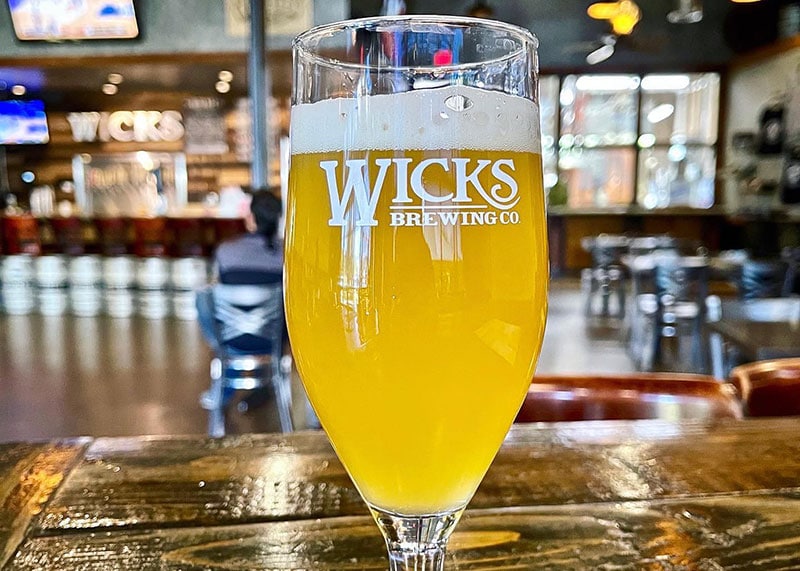 Wicks Brewing prides themselves on the knightly pursuit of bringing good beer to the Inland Empire since 2013. Yes, they mean California. As Riverside and San Bernadino are so regally known, the Inland Empire is the perfect place for this micro-brewpub.

They offer a range of beers from “light & refreshing” to “sour & funky” as well as an in-house food menu.

At their taproom, they offer 18 draughts of their beers and hard seltzers. Plus, Wicks even makes their own homemade root beer and sparking lemonade.

They’re open every day of the week and offer guest cider and wine, for those who prefer a beer alternative. Pair your drink with a flatbread pizza or pub classic like potato skins or hot wings.

Stuck in the Middle – 6.3% ABV Cold IPA – An IPA brewed with lager yeast, this beer is a blend of both. 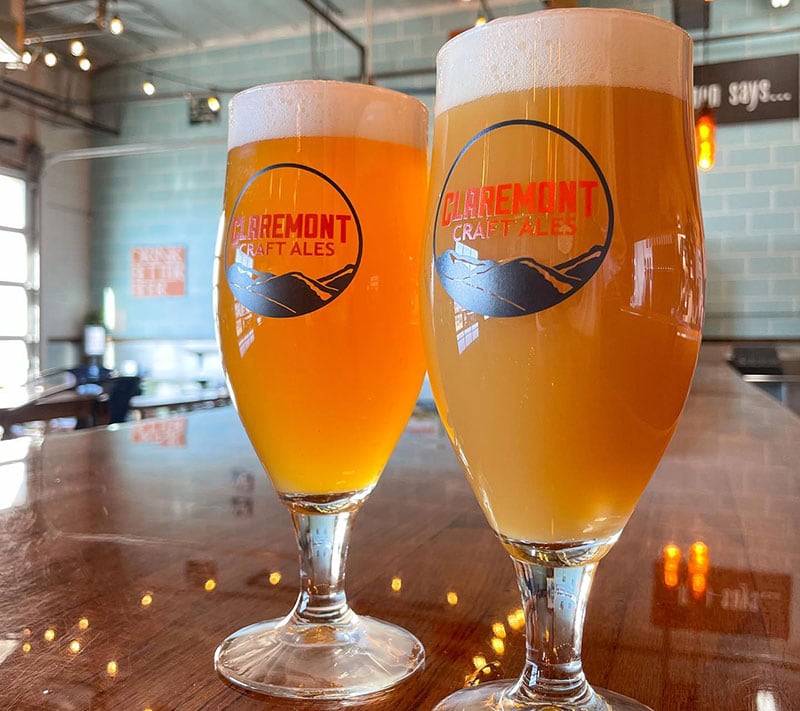 Claremont Craft Ales was founded in 2012 by two couples who are also cousins. This family managed to step the size of their brewery up 50x within ten years and have now won awards at the Great American Beer Festival and many other statewide events.

The tasting room is right off of Claremont Boulevard where you can go by for a beer or spend the evening playing trivia or bingo.

From Wednesday through Sunday, food trucks are available to line your stomach. Check the regularly-updated calendar on CCA’s website to see which food vendor is coming on which day. They also keep their tap list up-to-date, so you can plan your drinks. 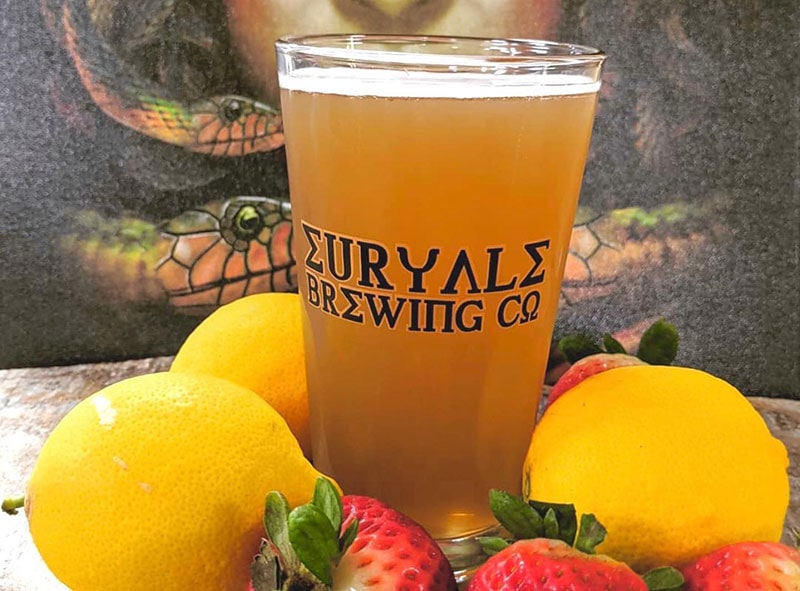 Euryale Brewing Co was founded by a former homebrewer Don whose friends and family pushed him to bring his business out of his garage and to the people. His homebrew roots still show through on Euryale’s tap list which will detail the beer’s stats such as IBU, OG, and SRM. For the less nerdy beer drinkers, they also explain each beer’s flavor with words instead of numbers.

You can try the beer of the gods at Euryale’s taproom Wednesday through Sunday. They have regular giveaways and events like trivia or paint-and-sip in a very casually-styled taproom.

They also have a regular line-up of food vendors to complements their brews from lobster rolls to meatball subs and more. Order a mythological beer or a made-to-order michelada. 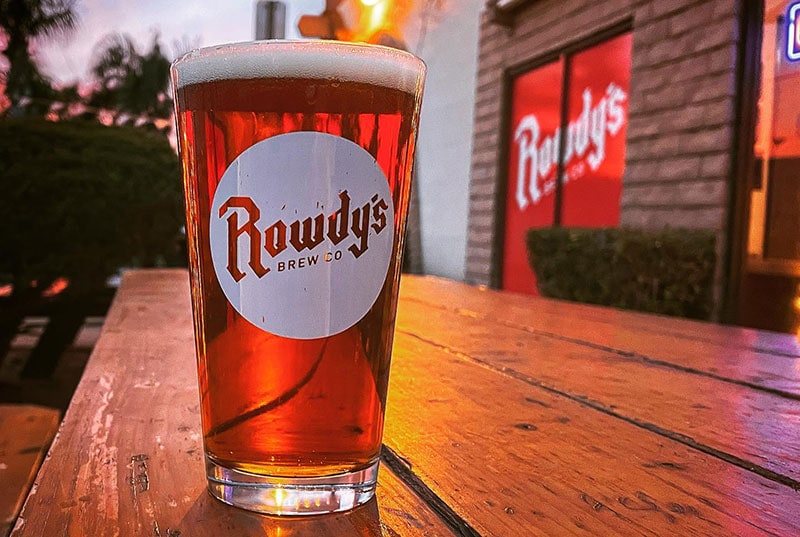 Rowdy’s Brew Co is a rough-and-ready brewery that will sass you into coming back for more. They don’t hesitate to brew any style of beer, offering your usual IPAs alongside lots of Belgian styles, stouts, red ales, and more.

They’re open to anything, but do warn that their business reflects the 21+ statute around drinking. While they don’t explicitly ban families with kids or dogs, they warn that their of-age customers come first.

Visit their tasting room and you’ll see that it is anything but rough-and-ready. Rather, it’s well-designed with clean lines and gives the impression of a conquered industrial space.

There they offer live music, visiting food trucks, Dungeons and Dragons game nights, and open mics, to name just a few of their events. Choose one of their 15+ taps that pour their beers as well as hard soda.