If you are thinking about visiting McAllen and have some qualms about the safety of the city, we got you covered.

We are going to deep dive into crime rates, crime statistics, crime maps, crime graphs and talk to the residents of the city to give you a better understanding of how safe McAllen really is.

What is McAllen, TX crime rate?

Year over year violent crime has decreased by 12.1%.

You have a 1 in 1,156 chance of becoming a victim of violent crime in McAllen.

McAllen has a similar violent crime rate to Fulshear, Sachse and Splendora.

Here’s a graph showing you how violent crime has trended over the last 11 years in McAllen:

Violent crime in McAllen has been steadily declining over the last 11 years. 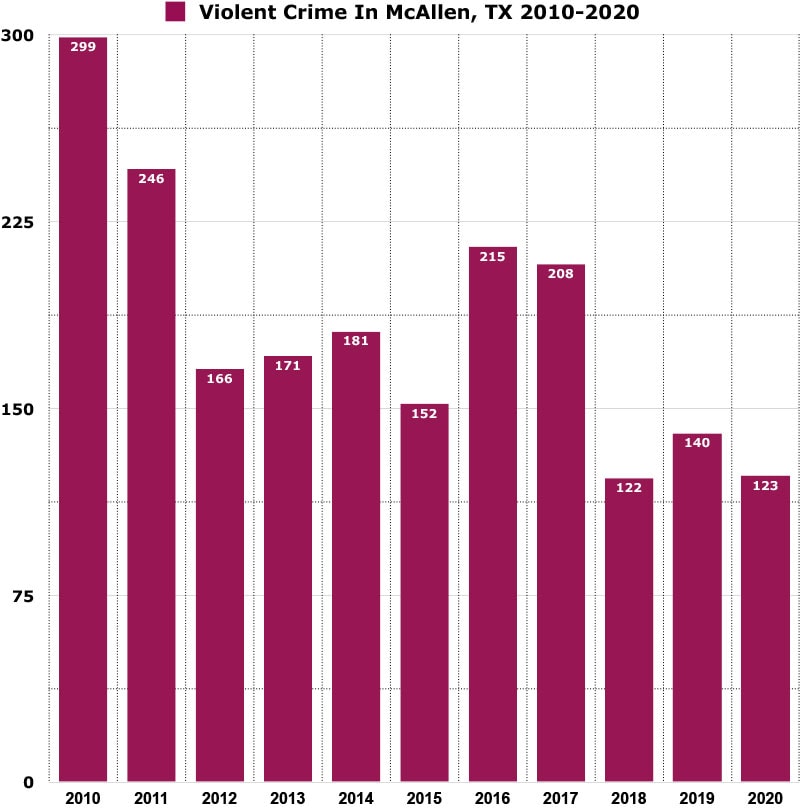 *Violent crimes includes; homicides, rape, robbery and aggravated assaults and the violent crime rate is calculated by dividing the number of reported crimes by the total population; the result is multiplied by 100,000.

Year over year murders has decreased by 24%

Here’s a graph showing you how homicides has trended over the last 11 years in McAllen: 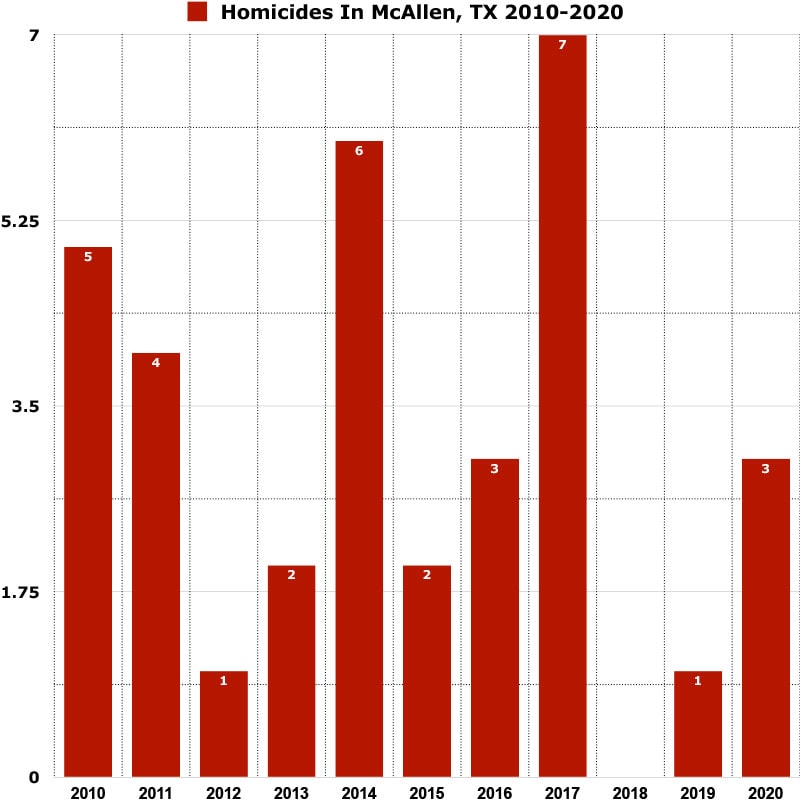 Year over year property crime in McAllen has decreased by 22.4%.

You have a 1 in 51 chance of becoming a victim of property crime in McAllen.

Here’s a graph showing you how violent crime has trended over the last 11 years in McAllen:

Property crime in McAllen has been steadily declining over the last 11 years. 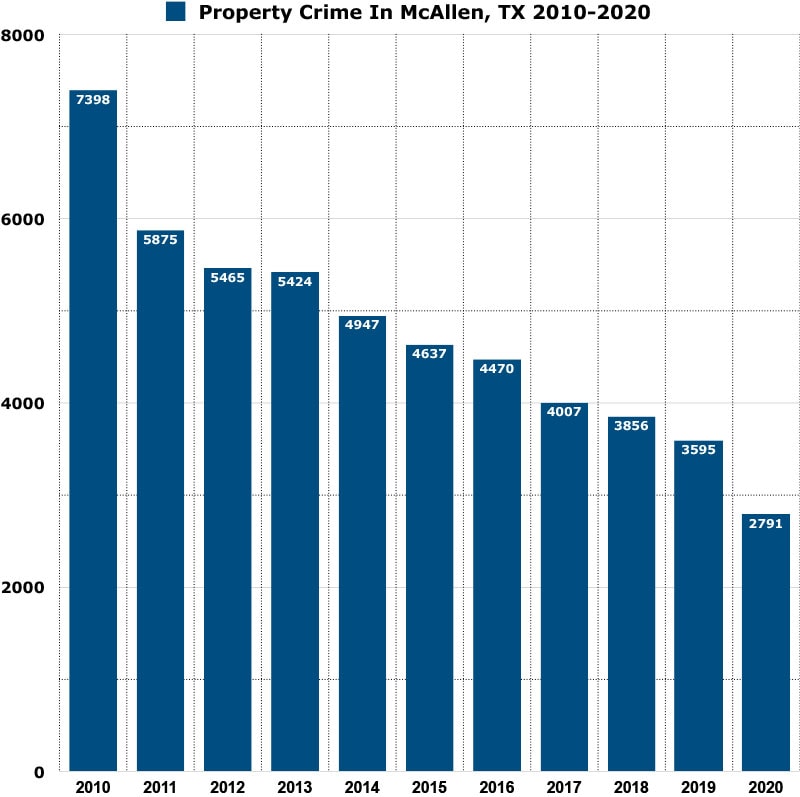 How are McAllen’s crime rates calculated?

McAllen’s crime rate vs other cities in Texas

Here’e how McAllen’s crime rate compared to other cities in Texas. McAllen has one of the lowest crime rates in all of Texas.

McAllen, TX vs The Most Dangerous Cities in the United States 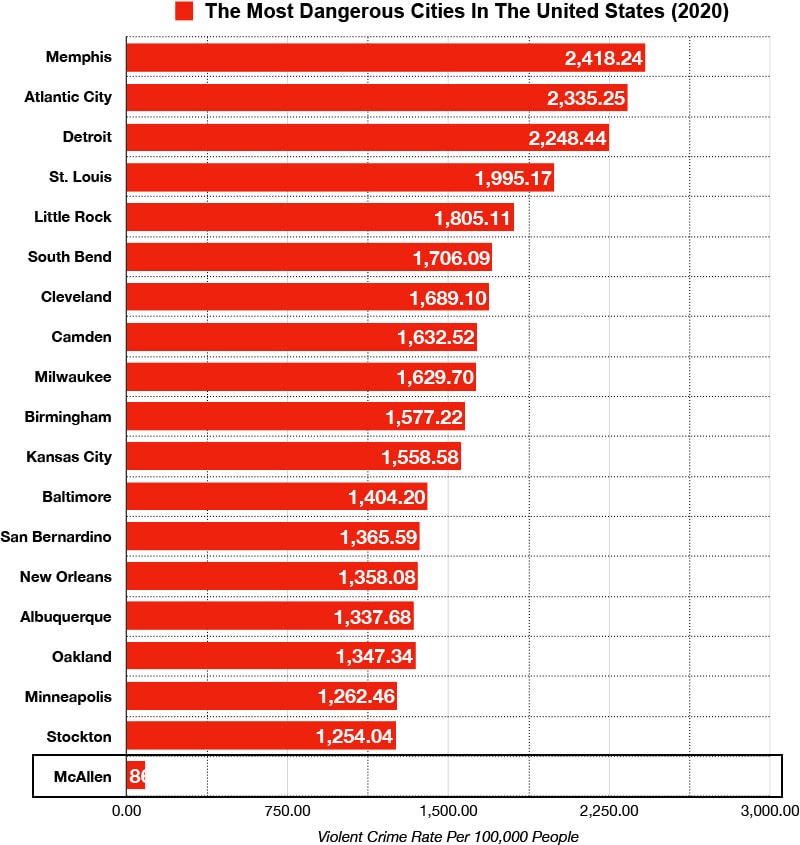 How much has crime increased in McAllen, TX? 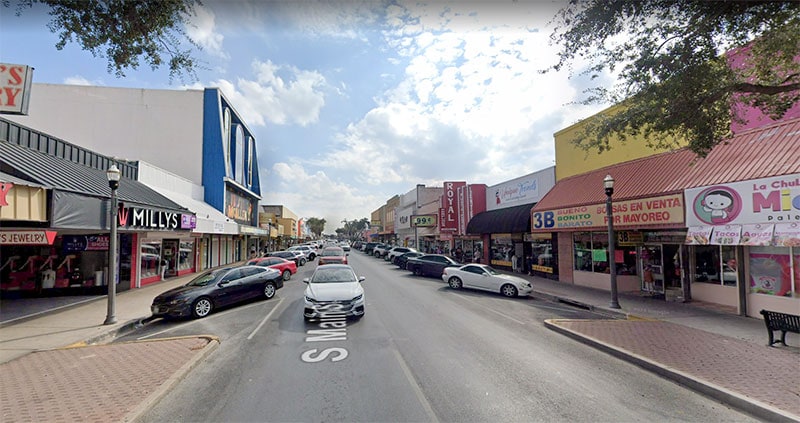 Downtown McAllen is generally a safe area to visit day and night. The downtown area is very walkable and there are plenty of good options for restaurants, bars and shopping.

Is the public transportation in McAllen safe?

The public transportation system in McAllen is handled by the McAllen Metro and it offers many routes that interweave throughout the entire city. The Metro is generally a safe method of transportation to get around the city during commuting hours (7am -7pm)

Is McAllen safe at night?

McAllen is generally a very safe area to visit at night. We recommend that you take some precautions at night in regards to staying in well populated places, not straying off the beaten path and not walking by yourself at night.

What do residents of McAllen say about it’s safety?

Many people think that McAllen is dangerous because of the proximity to Mexico, however that couldn’t be further from the truth. Looking at the crime rates and crime statistics you can see that McAllen is a very safe city. It is one of the safest cities in the Texas and it’s crime rate is one of the lowest in the nation for a city of its size.

Here’s a scale to give you some perspective on McAllen’s crime rate: