While severely lacking in towering pyramids of stone, the town of Cairo, Illinois does sit on the fourth longest river in the world, only 400 miles shorter than the Nile.

Nestled along the banks of the Mississippi, the history of Cairo goes back centuries. 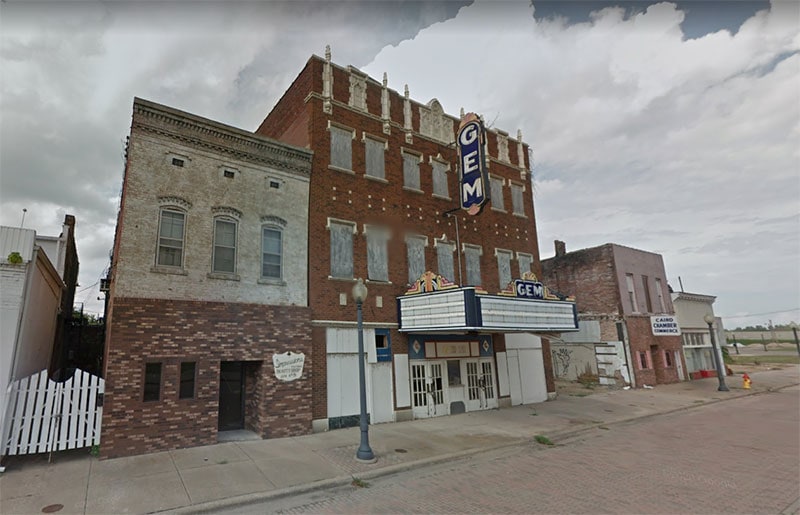 Though not nearly as grand as its namesake, this small town did have a lot of influence for its seemingly insignificant location.

What seems like a middle-of-nowhere town lost in the mid-west is actually a prime location. Sitting in the southern most tip of Illinois, the town of Cairo is the borderline of the state.

That is because it is wedged in between both the grand Mississippi and Ohio rivers. It’s at the tip of town that these two large waterways meet and, in the early days, made Cairo a vital trading center.

An ideal location for a river port, from Cairo one could follow the Mississippi down to where it spills out in the toe of Louisiana and there’s direct access to trade from the Caribbean and a route through the Panama Canal, – not to mention trading in every state along the way. 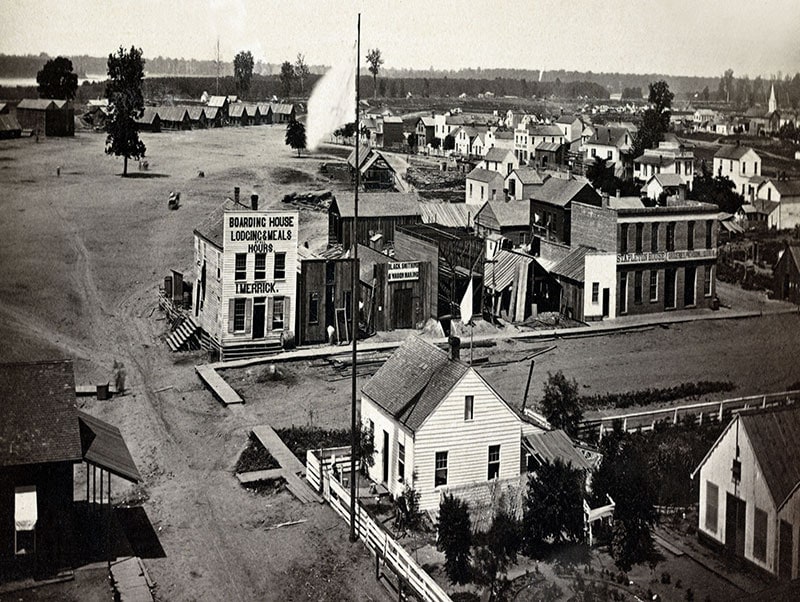 Despite this convenient setting that helped the town boom in the 19th century, Cairo would not remain on top.

Cairo’s history does go beyond the practical. Some may recognize it as the initial destination of Mark Twain’s world-renown literary traveling partners Huckleberry and Jim.

It was also written about by another famous author. Charles Dickens visited the town forty years previous to Twain’s novel and used it as a model for his own work. Such a classic, cultural history couldn’t preserve the town, though.

What happened to Cairo, Illinois? 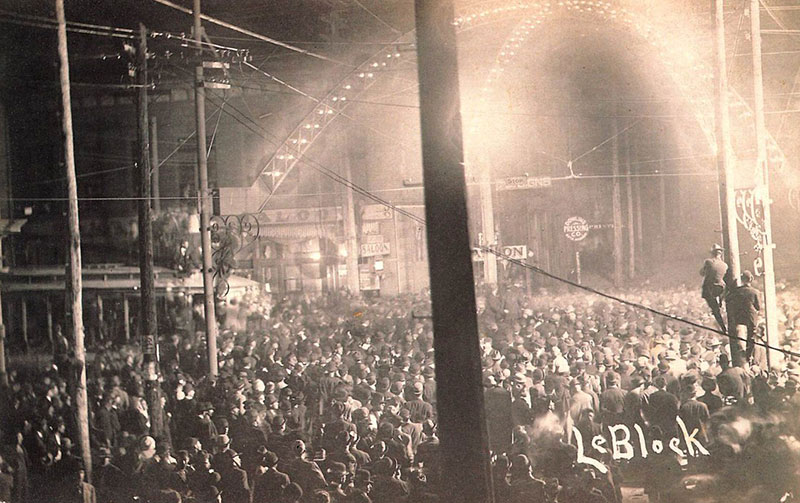 Cairo’s success was put at risk as early as 1889, when a nearby railway bridge was built and marred the lucrative river trade.

The effects weren’t catastrophic, though, and by the Second World War, the town’s population had continued to grow up to 15,000 residents.

Already at risk early on, continuing race tensions made Cairo’s existence even dicier. Well-documented lynchings took place in the early 20th century of both white and black men.

This hate continued with vigor through the Civil Rights Era when race riots broke out in the ’60s and broke the town apart through violence and boycotts.

White flight ensued. Many white business owners chose to close their businesses and move away rather than hire black employees.

In the ‘70s, an Interstate highway bridge was built through town. The interstate bypassed Cairo, which crippled the remaining hospitality industry in the city

Since the 1980s, Cairo has officially been consistently declining. In 1987, its hospital closed. In 2001, the Burkart Foam factory (one of the largest employers in town) closed its doors.

In 2017, the paper mill closed and, though it reopened the following year, caused many newly unemployed to pack up and leave. Industry left town and its economy flatlined, causing a mass exodus from Cairo.

To put the cherry on top of Cairo’s misery, the Ohio River burst its banks in 2011 and flooded the town, forcing evacuation.

This once prosperous place saw years upon decades of struggle from which it has yet to resurrect. 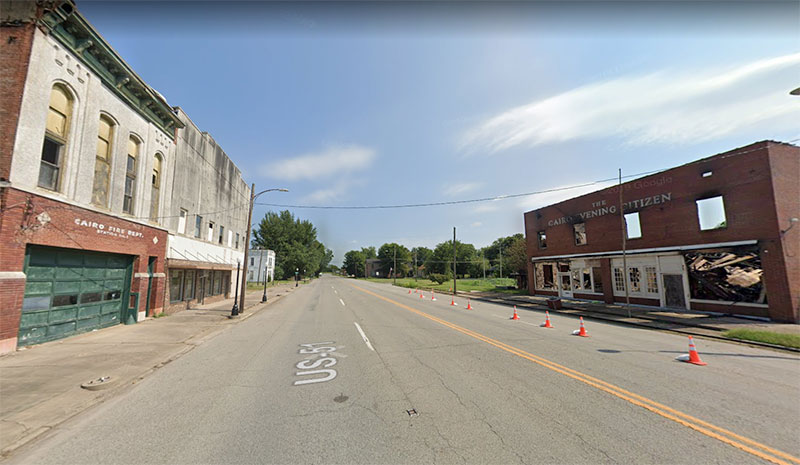 Today, Cairo is in the poorest cities in Illinois. Its population is down to a measly 1,700 – half of what it was 20 years ago and 9x smaller than it was 80 years ago.

This rapid decline has lead to much of the city being abandoned, with buildings condemned but still standing, leaving an eerie ghost town of empty houses and commercial spaces. There has not been a new, private home built in over 50 years.

Today, there is not a single grocery store in Cairo. There is no gas station for its residents. There is only one elementary school and one junior/high school which also serves as public gym, public library, town hall, food bank, and wedding venue. 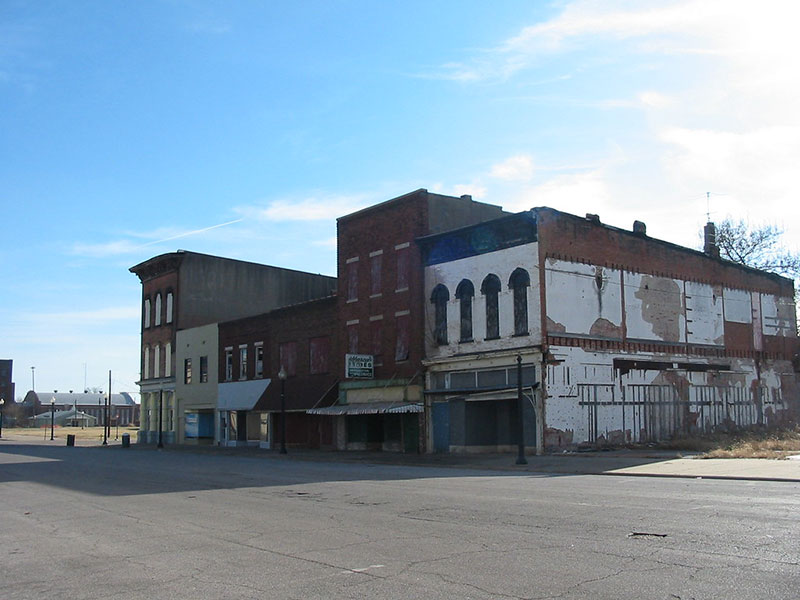 Those who still remain have less amenities than residents did 150 years ago. Whatever life is still left in Cairo seems ghostly.

What doesn’t help Cairo is the fact that the past still echoes through to the present day: with large businesses and industry gone, many can’t find jobs. Unless such enterprises return, it’s unlikely any small businesses will survive.

All of this puts peoples’ livelihoods at risk if they can’t find work. What’s more racial tension in Cairo continues. The ‘80s helped bring more people of color into local government, but locals today say that there is still residual effects from the ‘60s.

Some feel that Cairo is “dysfunction and politics,” a case study of the greater racial divide the country is facing today.

Is there any hope for Cairo?

Despite these problems that direly need addressing, hope comes from those who remain in Cairo and still call it home.

Despite the small-scale diaspora of residents, many still live in Cairo and insist it’s a town worth reviving – all it needs is a little cash.

Compared to the grand scale of government spending, which curries billions of dollars for federal projects, residents believe that surely the slightest expense for Washington can be the greatest savior of the town – if it arrives in time.

Until then, Cairo’s fate hangs in purgatory.

Is there anything to do in Cairo, Illinois?

Despite – or maybe because of – the doom and gloom hanging over Cairo, you can still visit the town. Tourists traveling from Memphis or Nashville to St Louis stop off in Cairo to see the ghost town in person.

Those who are attracted to its dismal existence can visit more than just abandoned warehouses and condemned homes. 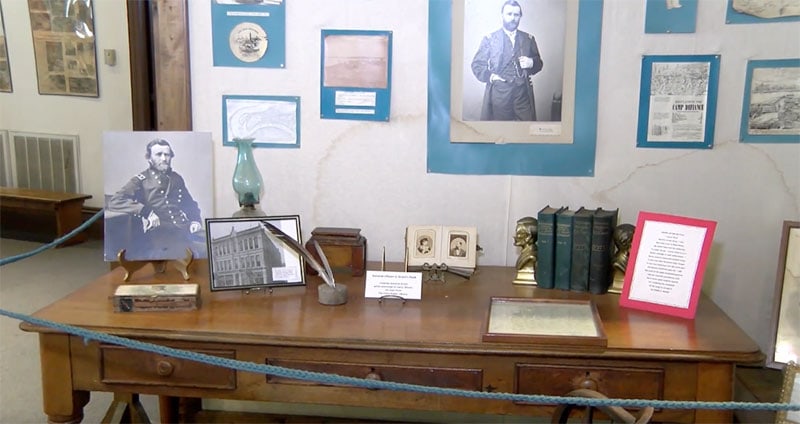 On the National Register of Historic Places, the Cairo Custom House Museum was once a place used for river imports taxation, a post office, and governmental agency offices.

Today it is home to a collection of Civil War memorabilia and local history. It features as part of the Lewis and Clark Historic Trail, though the house was built more than 60 years after they passed through on their expedition.

Attractions at the museum carry out into the grounds of the house where you can see decommissioned cannons and dedicated historical plaques. 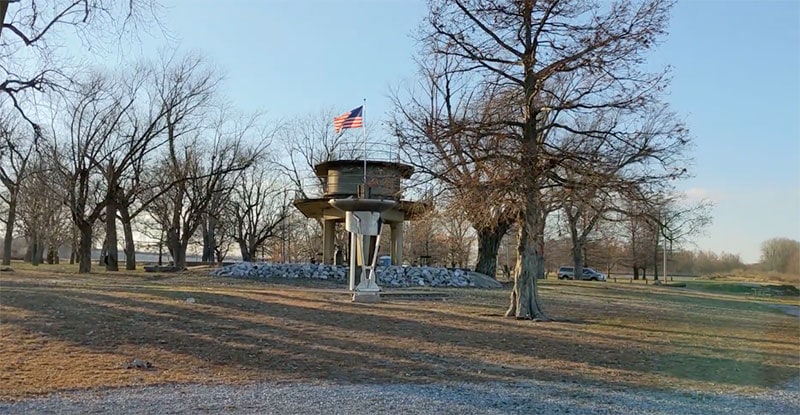 Also a feature on the Lewis and Clark Historic Trail, Fort Defiance Park sits on the southern tip of Cairo, at the confluence of the two rivers and three states.

It was on this spot over 200 years ago that the famous duo trained their Corps of Discovery in the use of their navigational equipment.

Today, it is a place of relaxation where visitors can stroll, picnic, ride horses, swim, and camp. The park covers 191 acres of land through which you can follow hiking trails, but don’t worry, you won’t need a compass to find your way. 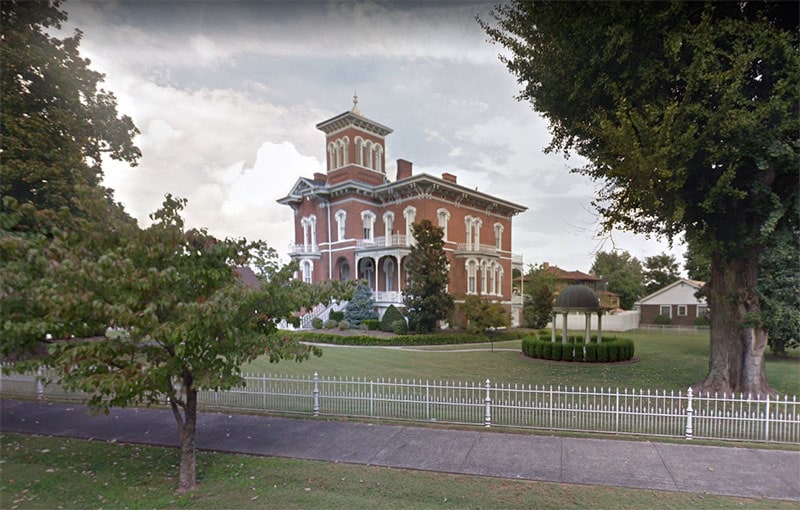 There is one house in Cairo that is certainly not abandoned. Magnolia Manor is a beautiful brick mansion set in the center of town with views across both sides of the peninsula.

Its construction was completed in 1872 by a man who befriended General (and future president) Ulysses S. Grant during the Civil War. Today, the house stands as a monument to its excellent architecture and to the history of the town of Cairo.

Once a month, this stately home hosts luncheon and specifically celebrates the holidays of Mardi Gras, Thanksgiving, and Christmas – make sure you make a reservation!