It shouldn’t be surprising to learn that Barstow, California – like many towns in the Mojave – was first settled by Americans as a mining town. Rather than being part of the gold rush, however, Barstow was known for its silver.

It was first settled in 1882 and went through a couple of name changes before they settled on Barstow, after the president of Santa Fe.

The town’s booming prosperity was unfortunately short-lived. The mine shut down only 14 years later when the silver deposits ran out. The ongoing railroads and eventually the famous Route 66 kept immigrants coming into the area, though, so that Barstow never failed.

Today, it’s an ever-expanding city sat on the edge of the Mojave desert, featuring a rich community and good access to nature.

The Mojave desert separates Los Angeles from Las Vegas and Barstow sits on the Californian side of the arid wilderness, about an hour and forty minutes’ drive away from L.A.

The drive to Sin City is considerably longer at 2 hours 20 minutes. Short of moving into the Mojave Natural Preserve itself, it’s one of the closest cities to – if not practically in – the ancient desert.

(Related: Is Barstow Safe To Visit?)

Things to do in Barstow, CA From the early pioneer trails, through the age of the railroads, to the iconic Route 66 of the mid-20th century, the Route 66 Mother Road Museum is dedicated to the history of travel along this famous route.

The collection is home to many artifacts from the past along with photographs encapsulating the spirit of Route 66.

They also have regular exhibits by artists inspired by the Route. The museum is open Friday, Saturday, and Sunday 10-3pm or by appointment.

You can support this entirely volunteer-ran museum by becoming an annual or lifetime member. 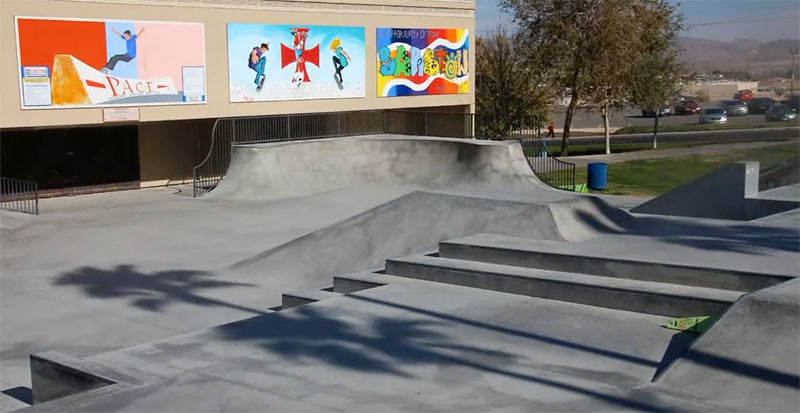 Dana Park sits right in the center of Barstow. Also home to the Cora M Harper Fitness Center, this is a place to get active.

There are the usual tennis courts and children’s playground for the little ones, but Dana Park also has a very large area for skateboarding, with lots of ramps and bowls to practice on.

Across the road in the Fitness Center is an indoor basketball court, cardio and weights gym room, and racquetball courts. After burning off steam, you can picnic or barbecue in the park with the whole family. 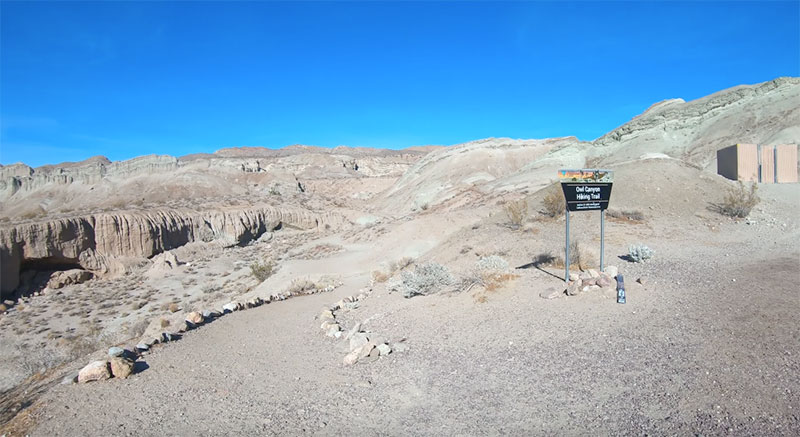 To the north of down in the uninterrupted wilderness is the Owl Canyon Trail. Running between three and four miles long, it takes about an hour and forty minutes to complete the moderate hike.

Some parts may require a bit of scrambling. The trail offers beautiful views of the rock formations characteristic of the area. Many people bring their dogs and some camp overnight.

It costs $6 to camp and there is a tap for water, but they still recommend you bring your own drinking water.

Be mindful to keep an eye out for rattlesnakes and bees. 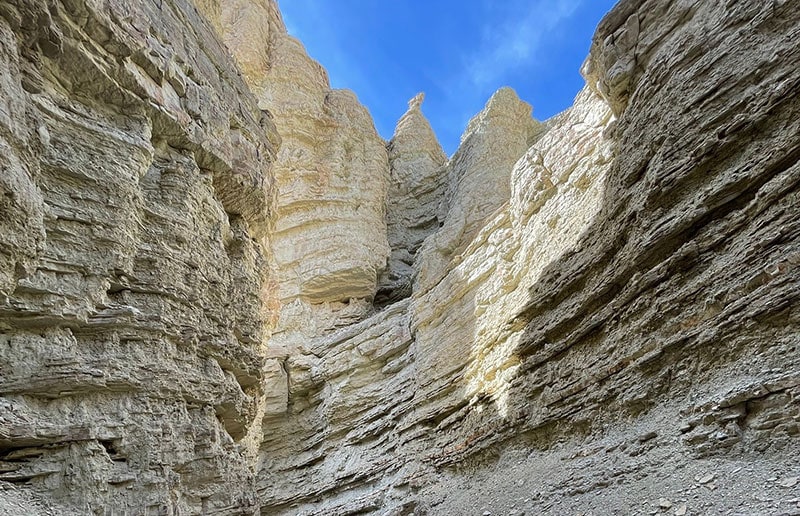 Lying almost parallel to the west of Owl Canyon is Rainbow Basin Slot Canyon. It’s a shorter path at only 1.3 miles long and takes about 40 minutes to hike without considering stops.

The trail itself is not marked, so the head may be hard to find. It is less frequented than Owl Canyon, where the campground is located.

Dogs are also welcome on this path and the same warnings apply for the local wildlife.

There’s hardly any shade in the area, so it’s highly recommended to bring plenty of water. 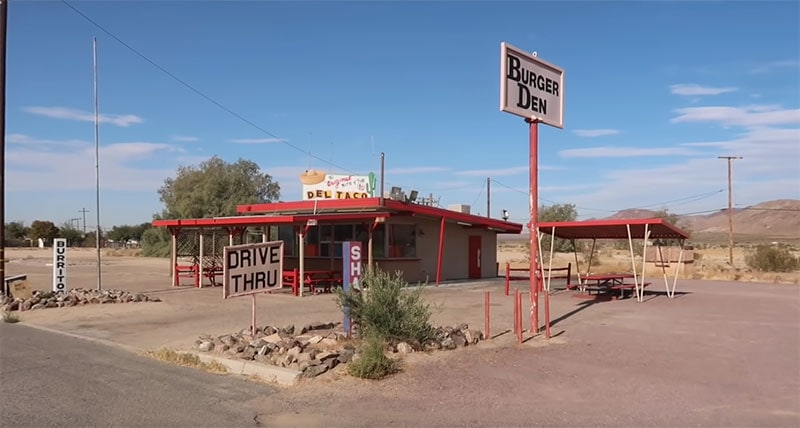 While there is a Del Taco right in town, travel just up the road from Barstow to Yermo and you’ll see the famous Mexican fast food chain immortalized.

The original shack and sign from 1961 still stand. Though the restaurant is no longer in business (it is abandoned), it is a testament to the popular taco stand created by a former Taco Bell employee – scandalous!

Any admirers of this west coast chain should stop by the site to catch a glimpse of history … and then drive back to Barstow to have lunch at the nearest Del Taco. 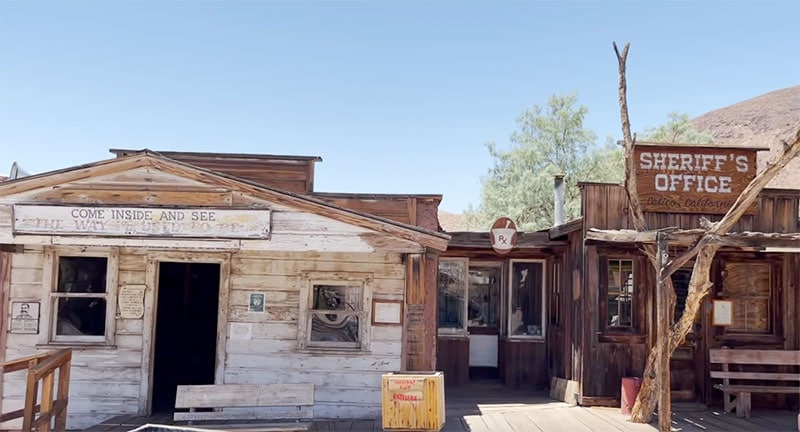 Calico was abandoned in the mid-1890s. Ten years previously it had hit its peak as a silver mining town. Today, Calico Ghost Town Regional Park stands as a testament to the old west.

In the 1950s, developer Walter Knott (who had just created Knott’s Berry Farm) purchased the land and kept the five original buildings in town while building false façades for the rest.

The ghost town isn’t completely abandoned, though. There’s a general store you can shop at, a pottery and leather works, photo studio, museum, café, restaurant, and beer garden. You can easily spend a full day here. 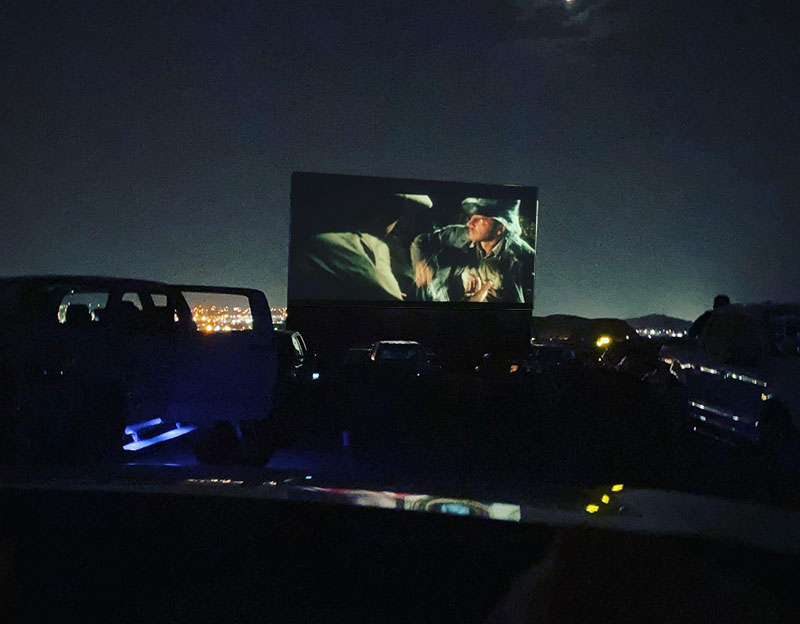 In a place like California – more specifically, the desert – where the weather’s fine, why not enjoy a movie in the open air? The Skyline Drive-In is also a place of history.

It first opened in 1966 and premiered the Paul Newman movie “Torn Curtain.” It closed briefly from 1987 to 1996, but has been in regular operation since and now has two screens.

The sound comes in through your car by tuning in to their own special radio station – just make sure you tune in to the right screen. You can bring your own snacks, but there is a concession stand. 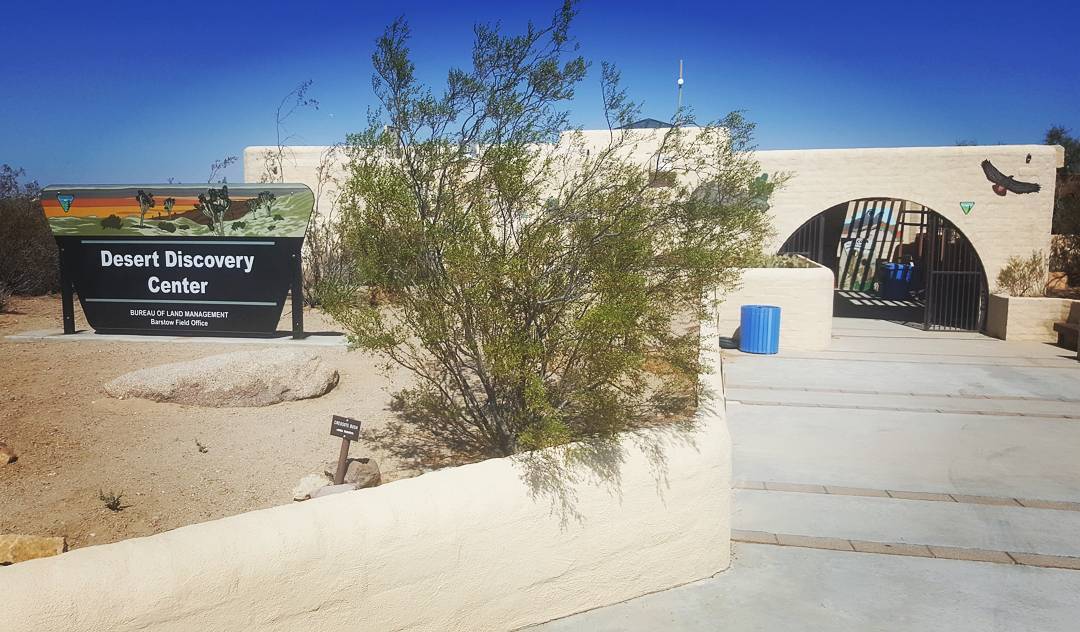 Across from Dana Park is the Desert Discovery Center. As Barstow sits on the edge of the Mojave Desert and just below Death Valley, you can learn about these natural wonders without going the whole hog and hiking through extreme heat.

The Center focuses on learning about the natural world and is home to the Old Woman Meteorite, the second largest meteorite to be found in the U.S. The Center has weekly events and monthly programs like Animal Feeding Time, art clubs, guided hikes, and festivals.

There is free admission to all who go to the center to learn.

9. The Outlets at Barstow 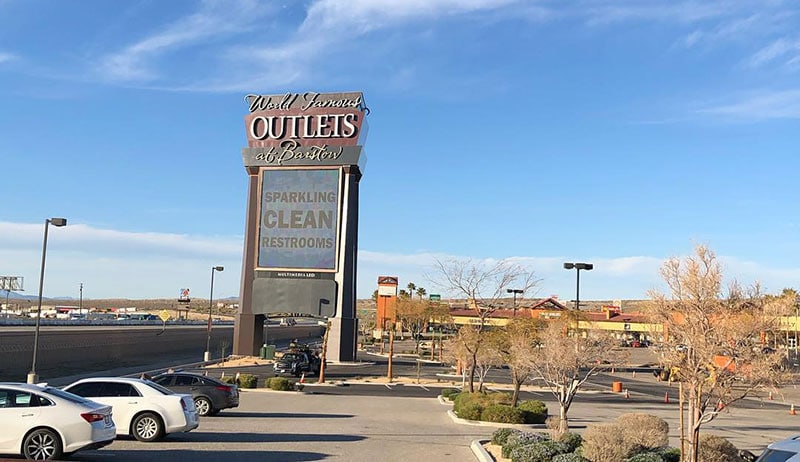 For those who want to beat the heat and get inside for some retail therapy, the Outlets at Barstow is a great choice.

Thirty-eight different brands you know and love set up shop here. You can save even more if you join the rewards program. Aside from being a member, they often have lots of giveaways to win or coupons to use.

There’s a food court on site to satisfy the appetite you built up, carrying all those bags. The Outlets are also home to the California Welcome Center which has loads of information for what to do in the area. 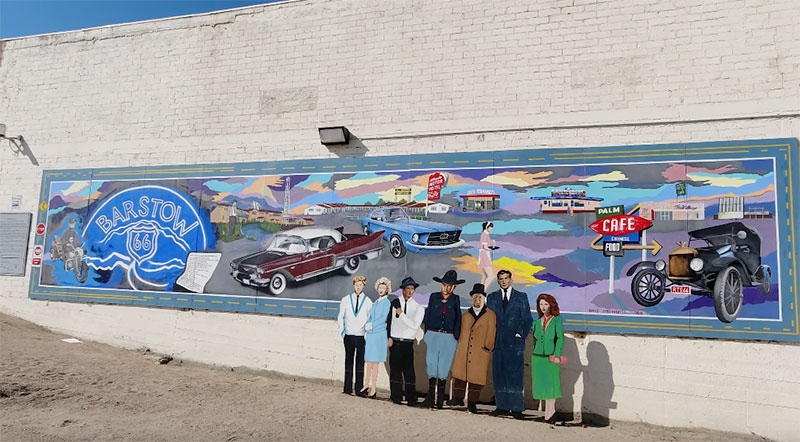 Wandering down Main Street in any town is usually a great way to get to know a place. In Barstow, though, it’s also an artist experience.

Main Street is a “walking gallery” that showcases the community’s artists. Supported by the non-profit Main Street Murals, these artists create larger-than-life pieces that celebrate the history, culture, and ecology of Barstow and the surrounding area.

There are depictions of the Mojave Desert, silver miners, local wildlife, native flora, and of course Route 66.

There are 25 different pieces to see stretched between First and Seventh Avenue. 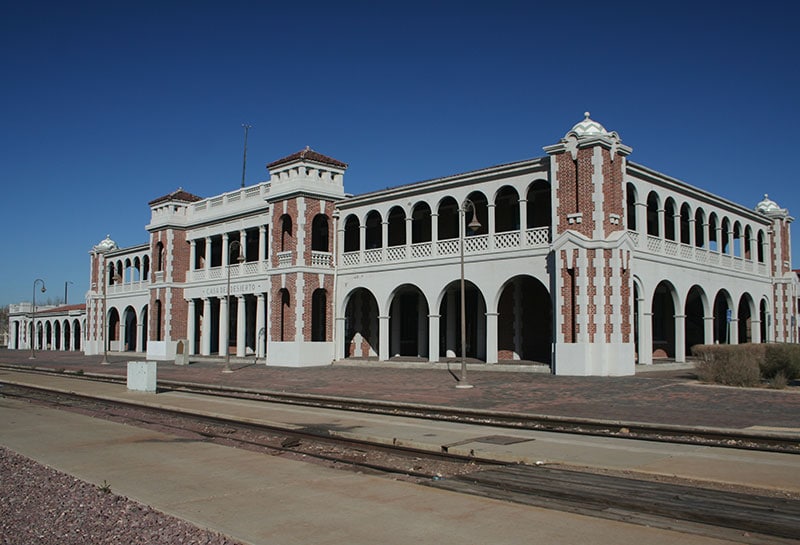 Harvey House is actually the site of the Route 66 Mother Road Museum, but it is also home so much more.

When it was first built, it was the railroad station building serving Barstow. Now, it’s a modern Amtrak station (yes, still in use!) and home to the Western America Railroad Museum.

The Spanish Renaissance-style building is also the site of city offices and the Chamber of Commerce, as well as a Visitor’s Center. Harvey House is all things transport and steeped in local history, though the museums are only open Friday through Sunday.

Like the Desert Discovery Center, the Mojave River Valley Museum is a place dedicated to preserving knowledge of the Mojave Desert.

Where the Discovery Center is strictly science-based, this museum celebrates the historical and cultural heritage of the area along with science.

There are monthly meetings open to all that host guest speakers who discuss a range of topics relating to the desert. If you become a member, you can help the museum expand as it’s already bursting full of artifacts and in need of more space to display it all. 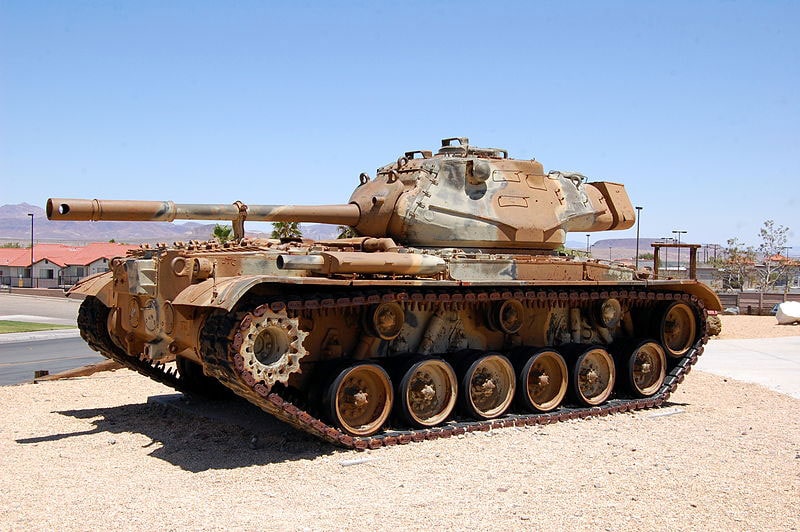 Across from Barstow Community College is a monument to our armed forces. More than a plaque, this monument is an actual, decommissioned M60 Main Battle Tank parked in Centennial Park.

The M60 is a tank that has been used by the United States military since 1959 and has since been used in countries across the globe, such as Korea, Germany, and Iraq.

The one parked in Barstow is a reminder of the service provided to the country thanks to Fort Irwin, a military base in the desert outside of town. 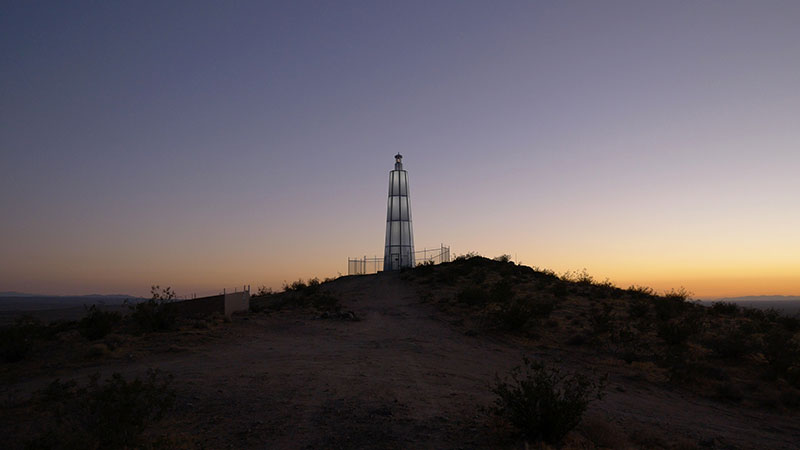 One of the last things you’d expect in the middle of the arid sandscape of Barstow is a building usually erected on the coast, but there is indeed a Desert Lighthouse.

Built in 2017 by artist Daniel Hawkins, this wayward construction stands over 50 feet tall and is fully functioning. The light creates a beacon in a sea of sand.

The lighthouse was built over a ten year period thanks to local contractors. To visit the lighthouse, you need to drive down Brook Canyon Road outside of the town of Hinkley and then hike a half mile.