If you are thinking about visiting Miami and have some qualms about the safety of the city, we got you covered.

Lets deep dive into the some crime statistics and crime rates and see how safe or dangerous Miami really is.

What is Miami’s crime rate?

Here’s a table showing you the crime rate over the last 5 years.

Does Miami have a high crime rate?

Miami does not have a high crime rate. It has an elevated crime rate that is higher than the national average, but well below the crime rate of an unsafe city. Miami has a similar crime rate to cities like New York, Austin and Portland.

Here’s a scale to give you some perspective on Miami’s crime rate:

You have a 1 in 163 chance of becoming a victim of violent crime in Miami.

Here’s a map showing you how violent crime has trended in Miami over a 11 year period. 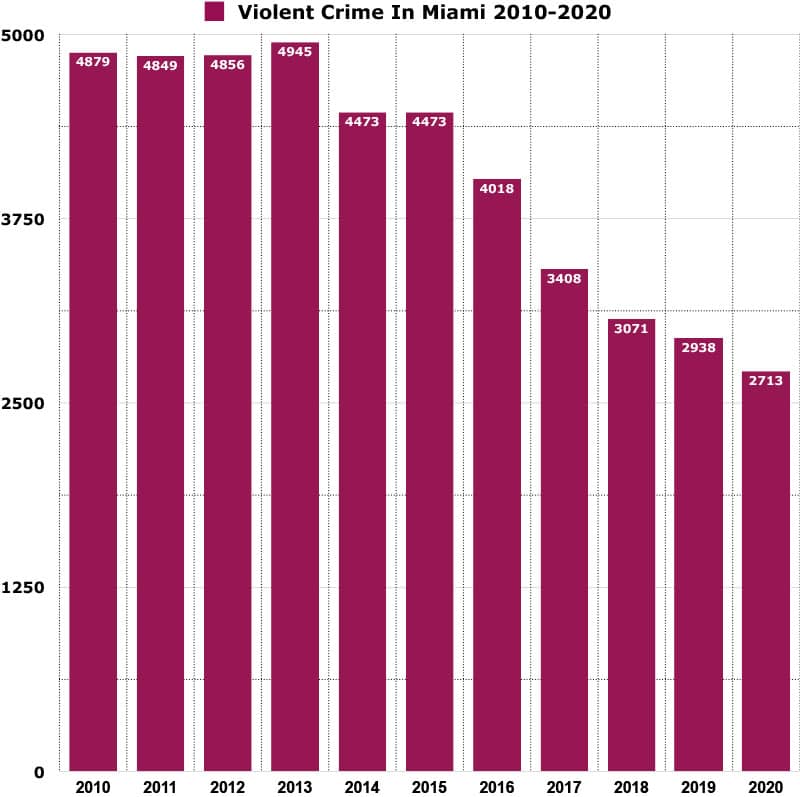 Miami’s murder rate is 2 times greater than the national average.

Year over year murder has increased by 42%.

Here’s a map showing you how murders have trended over the last 11years in Miami. 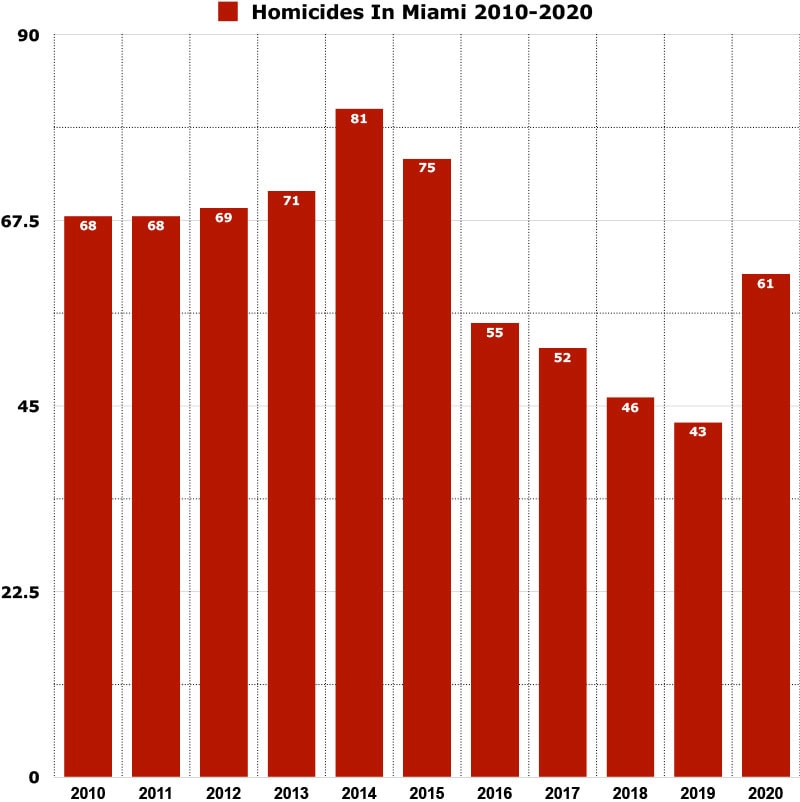 You have a 1 in 34 chance of becoming a victim of property crime in Miami.

Here’s a map showing you how property crime has trended in Miami over a 11 year period. 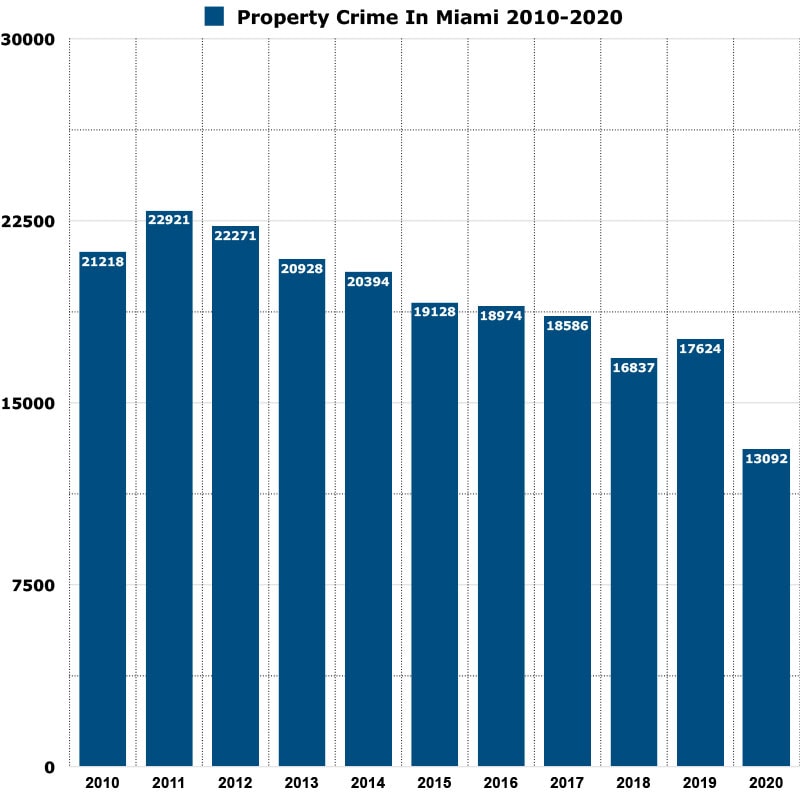 Miami’s crime rate vs other cities in Florida (2020)

Here’s a graph showing you how Miami’ss crime rate compares to other cities in Florida. Miami had the 9th highest crime rate of all the cities listed in 2020. 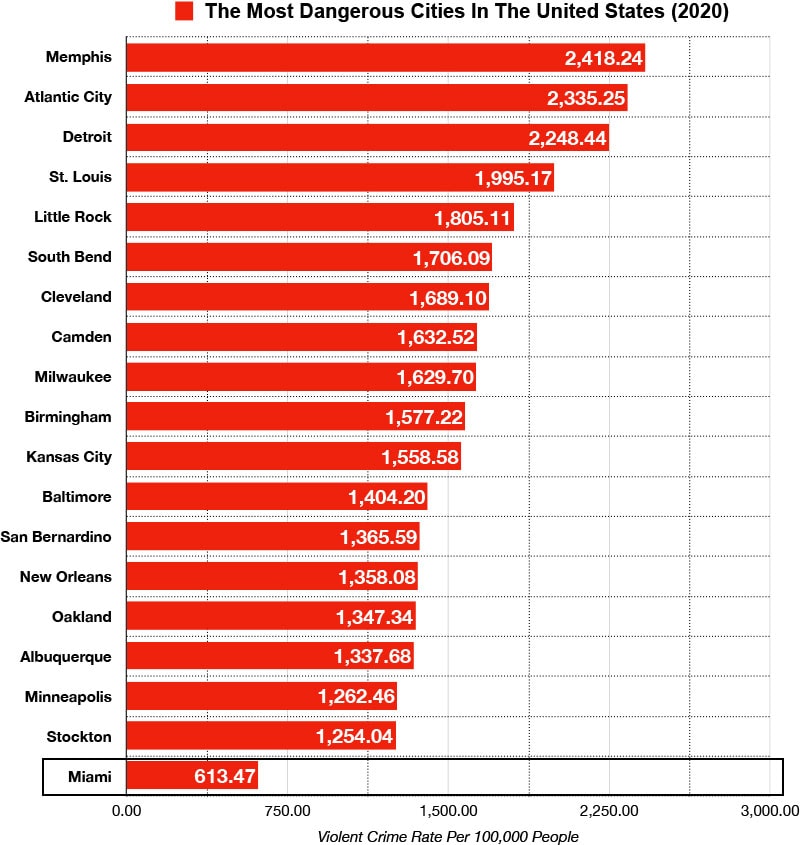 How are Miami’s crime rates calculated?

How much has crime increased in Miami?

Neighborhoods to avoid in Miami

Here’s a list of the most dangerous neighborhoods in Miami according to residents: 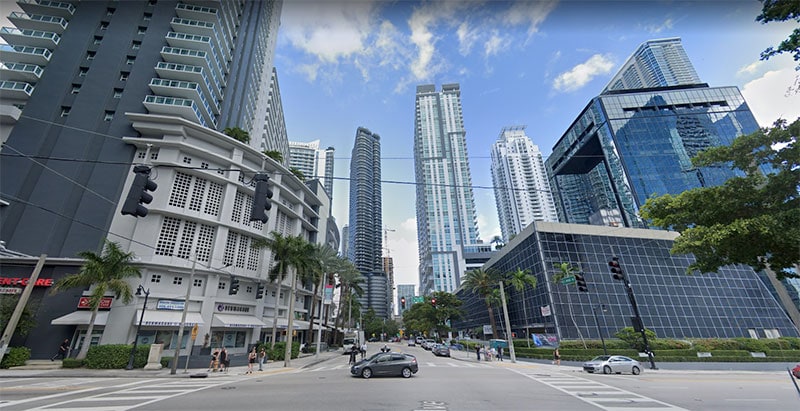 Downtown Miami is generally a safe area. Just be aware that the further west and north you go, the sketchier it gets, especially at night.

Stick to well populated areas and avoid walking through desolate parts of downtown and you shouldn’t have any problems. 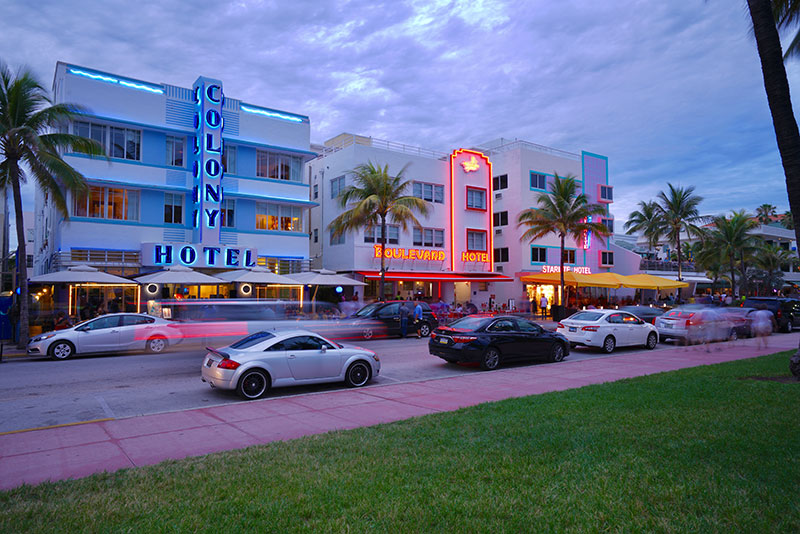 One thing to keep in mind while reading this statistic is that Miami Beach is a tourist heavy destination and the number of tourist aren’t included in the calculation, which can inflate the crime rate.

The city of Miami Beach has had some problems recently with shootings. On March 24, 2022, the city declared a state of emergency and implemented a curfew after two shooting took place in a 48 hour period, which injured 5 people.

Many Miami residents also complain that Miami Beach r has gone downhill and is not a place they want to be around, especially on Friday and Saturday nights.

Is the public transportation in Miami safe?

The public transportation system in Miami is handled by the Miami-Dade Metro and it offers many routes that interweave throughout the entire city.

The Metro and the buses are generally a safe option to use during normal commuting hours (7am – 6pm), however we recommend that you use a taxi or ride sharing service outside of those hours. At night there are less people using the metro or buses and it can get sketchy.

If you are taking the bus, you might encounter some weird and erratic passengers, but if you just ignore them, then you should be fine.

Download the Miami-Dade transit app, it tracks the buses to let you know when it’s coming and if its late.

Is Miami safe at night?

Miami is generally safe at night as long as you stay out of the problem areas listed above. Be aware that streets and squares that are perfectly safe to visit in the daytime can be questionable and sketchy at night. Stay in well lit and populated places at night and avoid walking through desolate areas.

Is Miami safe from hurricanes?

Miami is not safe from hurricanes and is actually susceptible to them, due to its coastal location on the coast of Florida.

The last major hurricane to hit Miami was in 1992 when Hurricane Andrew, a category 5 hurricane, passed directly over the city and devastated it. 40 people lost their lives and more than 63,500 houses were destroyed, 124,000 homes were damaged and it caused $27.3 billion in damages.

What do residents of Miami say about it’s safety?

Statistically speaking, Miami is a moderately safe city. It’s crime rate of 613.47 per 100,000 residents is higher than the national average, but it doesn’t enter the ‘unsafe’ territory. It’s crime rate is on par with cities like Seattle, Fort Lauderdale and Las Vegas.