Craft brewing goes hand-in-hand with industrial warehouse spaces. You need enough room for all your brewing equipment and you used to have to hide the smell from irritable neighbors.

Happily, today people are used to breweries in city centers, even welcome them. Baltimore is even luckier as it’s choc-full of industrial spaces, thanks to its long history as an ideally located trading center.

We’ve compiled a list of the 10 best breweries we think are worth visiting in the city twinned with our nation’s capital. 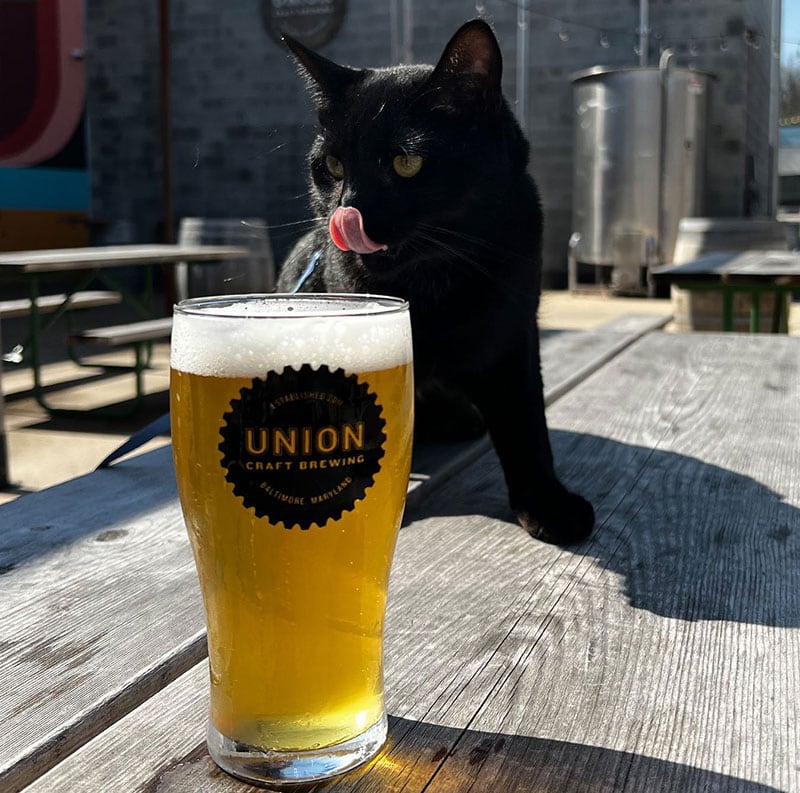 Union Craft got its name from everything, a union, if you will. Inspired by the union of barley and hops, the union of brewers and drinkers, etc.

They even founded a collective of like-minded small businesses with which they found, you guessed it: the Union Collective.

Since their inception in 2012, Union has grown with success over the past decade. They started with a flagship IPA and have continued to brew a core range of pale beers, supplementing their color spectrum with seasonal brews and small batch experiments.

Union Hall and Beer Garden are ready to welcome you, right where the beers are made.

Inside, the taproom shares a space with The Charmery and Vent Coffee Roasters, part of their Union Collective.

All the taproom food is provided by Well Crafted Kitchen. For drinks, you can choose from a wide range of draft thanks to a list easily broken down between classic, hoppy, sour, seasonal, or speciality – depending on what’s on tap that day.

Enjoy sunshine in the beer garden or go for drinks on a Saturday and have a tour of the brewery. 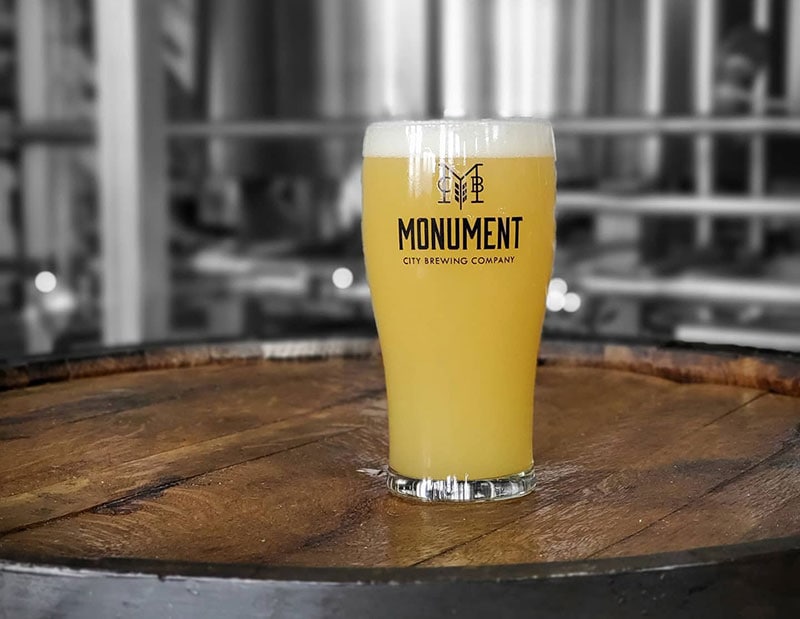 Monument City was founded by two brothers while hiking the Appalachian Trail. Their joint love for homebrewing and passion for talking everything beer related carried them along their trip, off the trail, and on the road to opening a brewery together.

Many of their beer names are inspired by the joy of being outdoors, local monuments, or good causes. They have a four beer core range and seasonal brews, but also release limited edition goodies.

Monument recently opened a second location at Spring Meadows Farm, but the original taproom is on North Haven Street in the center of Baltimore.

High windows are set into a traditional brick façade. Inside, the brew kit is set against exposed brick walls, an open ceiling with exposed pipework, and views to their aging barrels.

You can drink in Thursday through Sunday. Be sure to keep an eye out for regular events with a focus on live music. 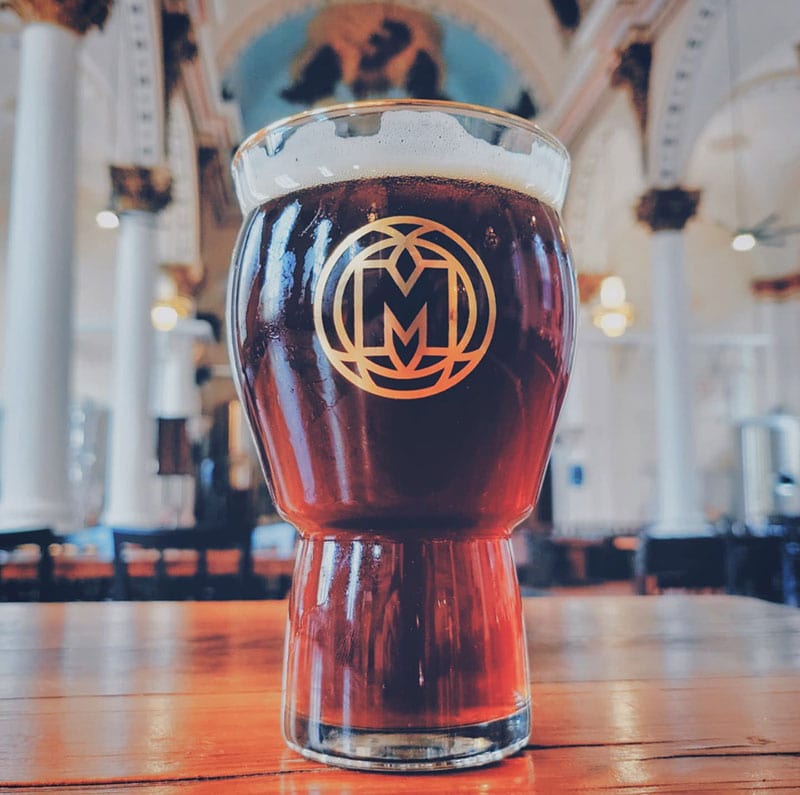 The Ministry of Brewing is something holy. Perhaps they get that aura due to their location – they’re based in the deconsecrated St. Michael’s Church.

The shadows of the building’s former purpose echo through the Ministry’s core values. They help to educate, connect with their community, and give back to it through philanthropic pursuits. All of their beers feature a colorful stained glass design.

Step into the taproom and you’ll feel naughty for wanting to drink. Every part of the building has been restored to keep the vaulting ceiling and columns running the length of the room reminiscent of the church’s part life, right up to the organ.

For now they host trivia and yoga, but are working on more programs to engage with the community, even the non-drinkers. Check out their website for their calendar of guest food trucks. 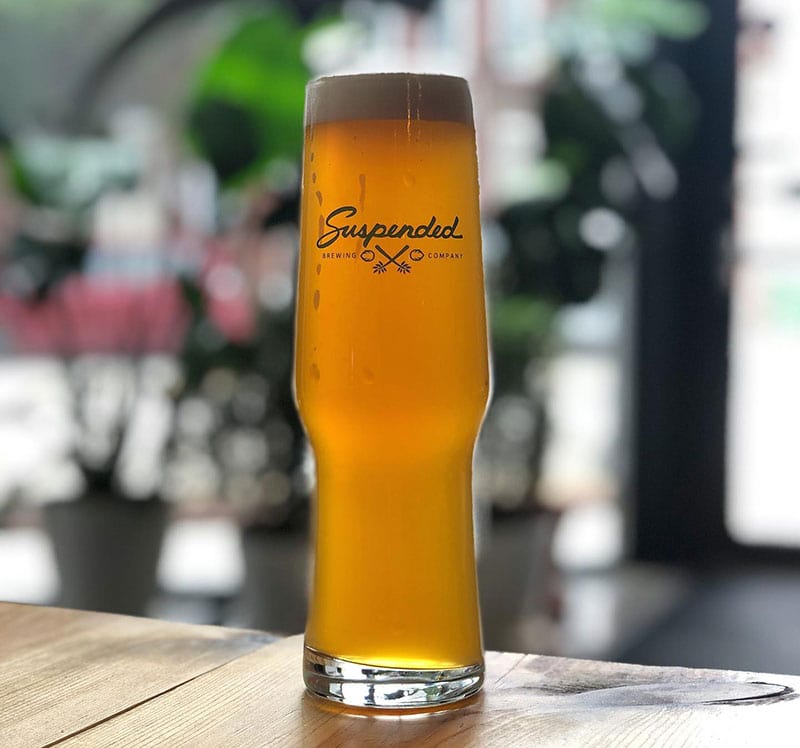 Know a microbrewery? Think smaller. Suspended Brewing is an über micro brewery in the Pigtown neighborhood of Baltimore. Their production fits in a commercial shop front – no wide open warehouse.

The ethos of the company focuses strongly on being cruelty free: all of their products are vegan.

Suspended is a minority and woman owned business that takes on social justice and ecological stewardship while running a successful businesses.

They focus on mixed culture fermentation, but often explore beyond that into all the styles of beer.

Their small taproom is only open on Fridays and Saturdays, but they distribute their beer to seven different locations throughout Baltimore.

The times they are open, they’ll have guest food trucks, art exhibits, and local craft vendors. There’s seating both inside and out and they’re dog friendly. 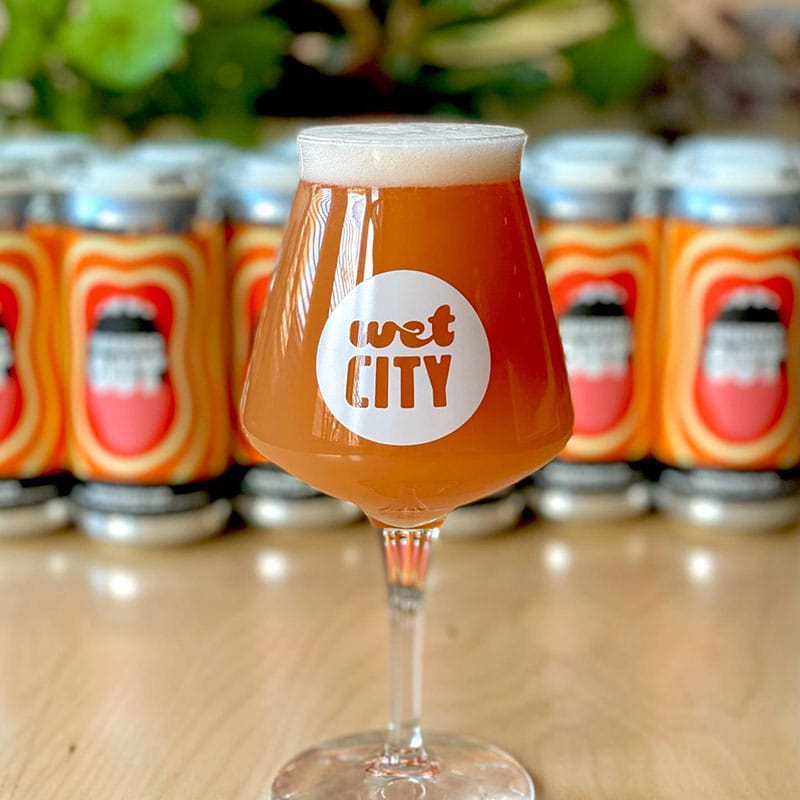 Like many others, Wet City draws its inspiration from the moment in history America has never gotten over: Prohibition. In Maryland’s case, they were the only state to refuse to enforce Prohibition on a legislative level.

Their taproom offers indoor and outdoor seating, food and drink, eat in and take out.

Along with their beers, Wet City offer a special house cocktails list, some of which include their own brews or reenact them, such as the Berry Irene Margarita which include their Making Out With Berries sour or their Lil Snickers which echoes their Snickers Good Good stout.

The food served at Wet City ranges from small plates to mid to large and the photos will have you drooling.

Originally Terrapin Park, a baseball stadium in the early 20th century, Peabody Heights has been in the Abell neighborhood of Baltimore since 2012.

They first began as a contract brewery, fulfilling the orders of other breweries for three years before they started their own brand. Despite creating their own line of beers, they do still contract brew.

The tasting room has a double row of taps adding up to a whopping 38 beers on draft. The space is open, but cosy with string lights and black walls that bring things closer together.

The staff serve in baseball jerseys spangled with the Peabody Heights logo and loads of old Oriole memorabilia and portraits spangle the wall. In the summer you can tailgate the brewery in their beer garden. 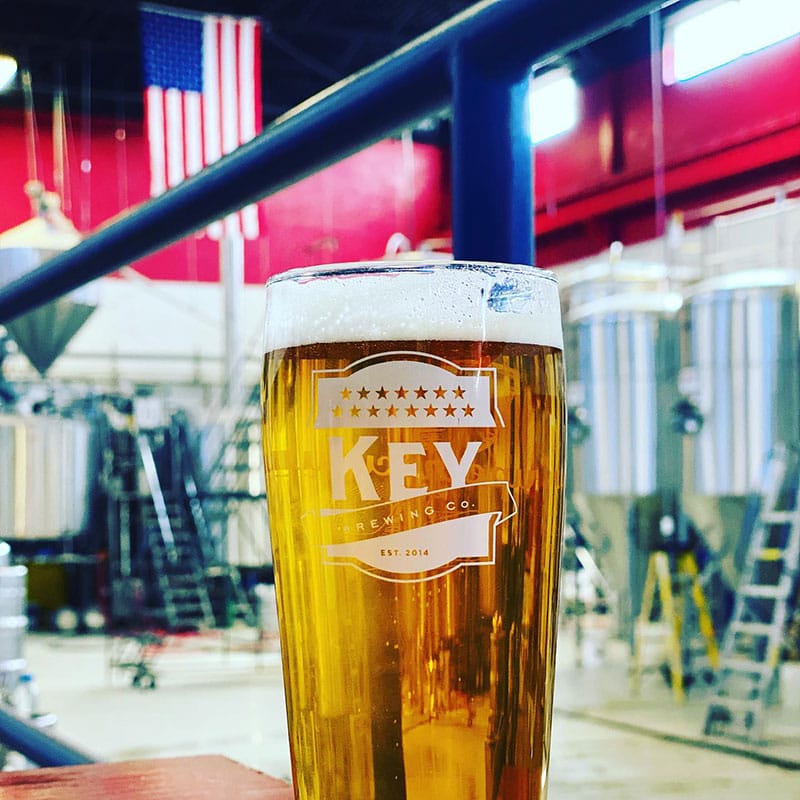 They’re the only brewery in Dundalk and have been brewing since 2015. Their core beers are all pale: either IPAs or a lager/pilsner; while their seasonal brews allow for more flavor variety.

Their taproom at the brewery is open Thursday through Sunday. Like all good industrial sites, it gives a view of the brew kit.

The bar is decked out in wood to give it a local sports bar vibe, further reinforced by big screen TVs playing sports and the brewery logo hung in pennant banners.

They have 12 beers on tap and the option of a beer flight to taste five in a row. 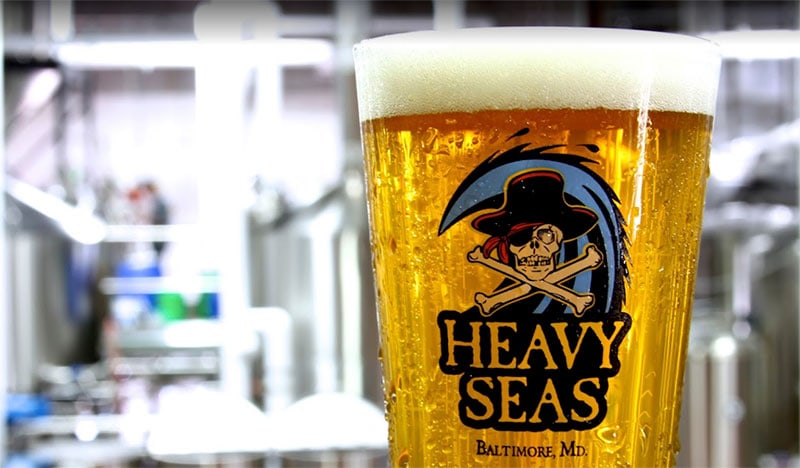 The founder of Heavy Seas has been in the beer industry since the ‘80s. First working in craft beer bars, Hugh Sisson helped pass the 1987 legislation that legalized brewpubs in Baltimore.

Heavy Seas is in southern Baltimore, located right near the junction of 695 and 895. The brewery and taproom are tucked away in an industrial estate where you can imbibe inside or out.

You can order their pirate-themed brews on keg or cask. They even have a permanent guest food truck, Kooper’s Chowhound, serving up burgers, fries, wings, gyros, and more. 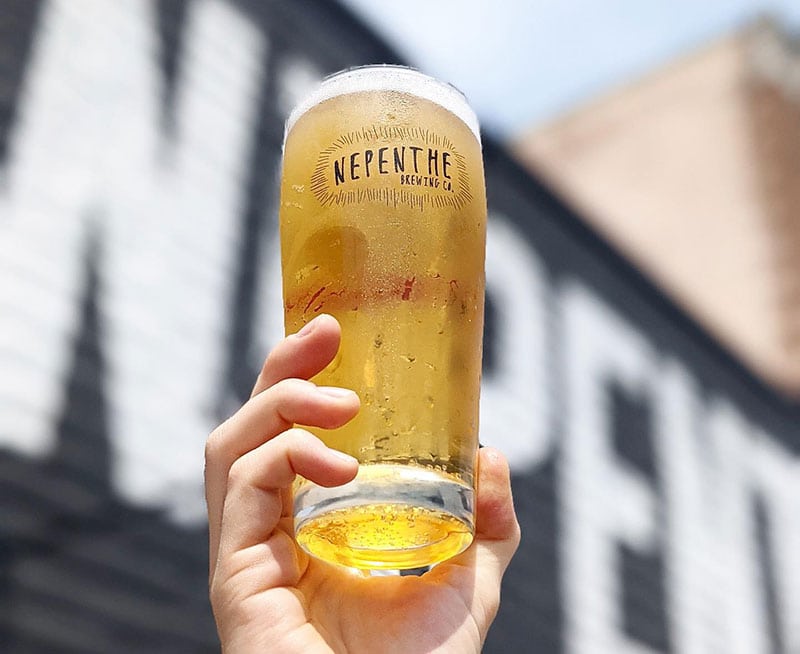 Nepenthe Brewing Co. goes beyond the brew. While they make very high quality beers, they also house a taproom for drinking in that has a full kitchen and curate their very own homebrew shop.

Whether you want to enjoy one of their own made on their 10bbl brew kit or take home your own equipment, Nepenthe has the expertise all under one roof.

The taproom is bar meets industrial unit meets eatery. Big bright works of art separate the cool shades of white, gray, and black while exposed brick reminds you you’re in a warehouse.

Order at the bar for all food and drink, including cocktails and beer flights. They serve daily specials, but also have a full menu of small plates, large, and sandwiches. 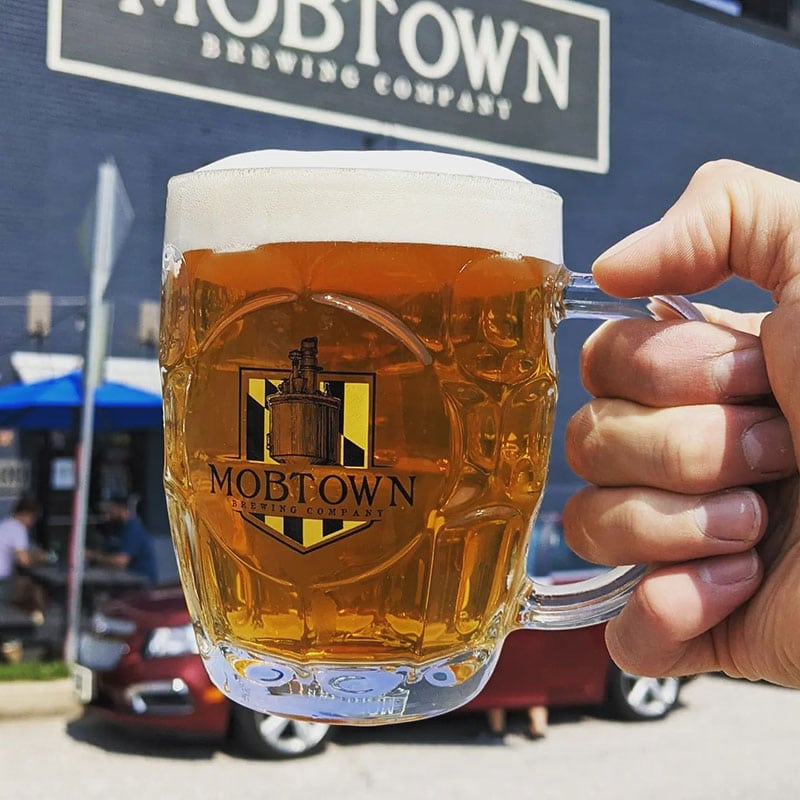 For over 100 years, the Brewers Hill neighborhood in Baltimore always had a brewery in operation – hence the name. In 1978 that tradition was broken … until Mobtown Brewing opened up.

They’re a nano brewery producing a wide range of flavors, including sours and aged beers.

Their taproom is in their gorgeous brick warehouse. Inside, the exposed brick is painted over, reminiscent of a jail, with a big, vibrant mural of an octopus bringing color into the space.

A chevron and tin bar separate the taps and the brew deck from the public. They have seven beers on draft and you can taste a bunch at once with a flight of five.

It’s the perfect place to do some sipping or get involved in one of their many events. Past ones have included drag brunch, flower pressing, trivia, and pasta making workshops.