The Northern Lights are a phenomenon that date back as far as time itself. Technically an interference in the magnetosphere caused by solar wind, we view them with awe and grandeur.

Over the centuries, people have mistaken the aurora borealis as a sign from the gods, a nuclear fallout, Judgement Day … anything supernatural. The truth is that our planet (as well as a few others in the system) is capable of beautiful – and harmless – things.

Many destinations sell their tourist industry based on the Northern Lights. Iceland and other nordic countries are popular destinations for aurora cruises or overnight camping vacations. You don’t have to go that far afield, though.

Can you see the northern lights in Washington? 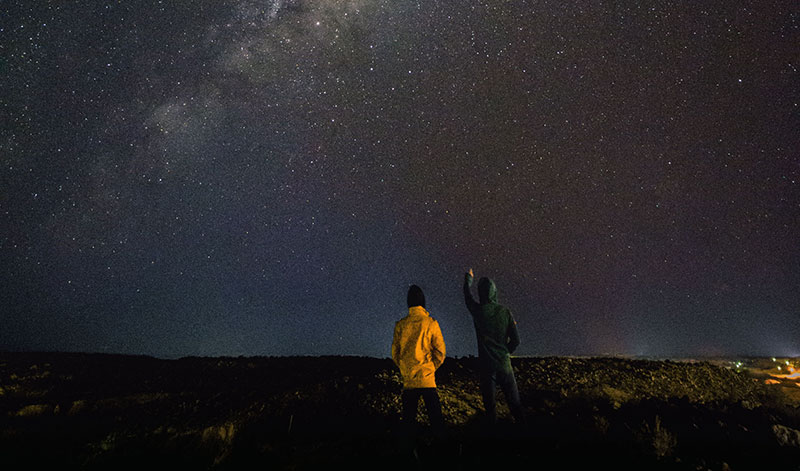 When was the last time the northern lights was visible in Washington?

The last time the aurora was seen was very recently, just in February 2022. At around 1:00-2:00 in the morning, several night owls from central Washington captured photos of a seemingly phosphorescent sky colored with swathes of green and pink.

Just before that, a slightly grander sighting was recorded in October 2021. The aurora was so strong that a time-lapse video taken of the skyline over Seattle shows the colors dancing despite the city’s light pollution.

In September 2021, a photo taken by an amateur aurora chaser documented the Lights off Neah Bay, the most northwestern tip of Washington.

Based on the most recent sightings, it’s safe to say that the Northern Lights are a common occurrence in Washington state.

It’s hardly a once-in-a-lifetime experience for residents, and the odds are higher for vacationers visiting Washington than if they wanted to view the lights from, say, Wyoming.

What is the KP-Index and how does that relate to seeing the northern lights in Washington? 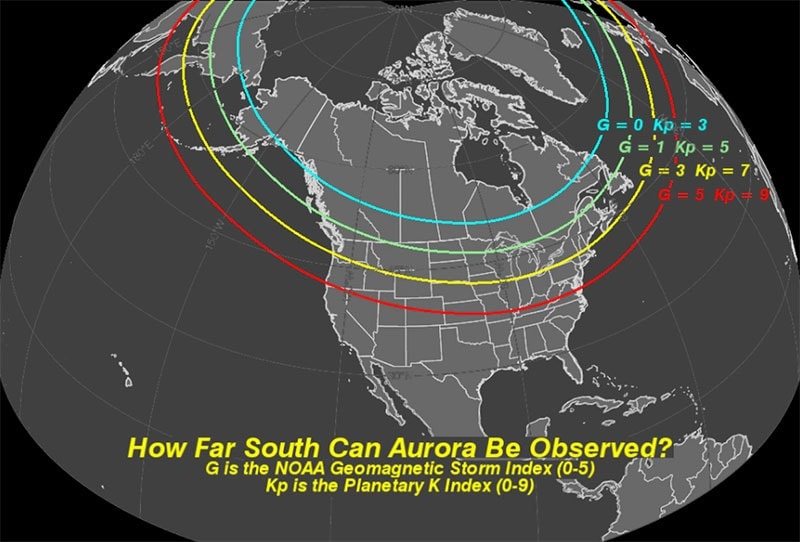 It’s possible to forecast the Northern Lights’ appearance thanks to the Kp-index. It is a scale from 0 to 9 that rates the likelihood of the aurora, with 0 meaning extremely unlikely visibility and 9 denoting an extreme geomagnetic storm.

The Kp-index is measured by recording the geomagnetic activity at certain places across the globe over a three hour period.

Meteorologists then use an algorithm adjusted to the latitude at which the recording was measured to determine the odds of seeing the Northern Lights in that location.

Anything below a 4 and you are unlikely to see the Lights, regardless of your position on Earth.

Middle latitudes need more of a 7 to be able to see them, while lower latitudes (closer to the equator) need an 8 or 9. Washington is well situated.

According to the Kp-index, a mere 4 is needed for guaranteed visibility from Vancouver (just north of the state) or Billings, Montana (in line with the bottom of the state); however, since the Earth is a globe, the line that runs through these places curve on a map just like latitude, meaning that

Seattle is actually in the Kp-index 5 zone. For the state of Washington, you need to rely on a 5 to see the aurora – maybe a 4, depending on where you are in the state.

Here are the best places to see the Northern Lights in Washington state: 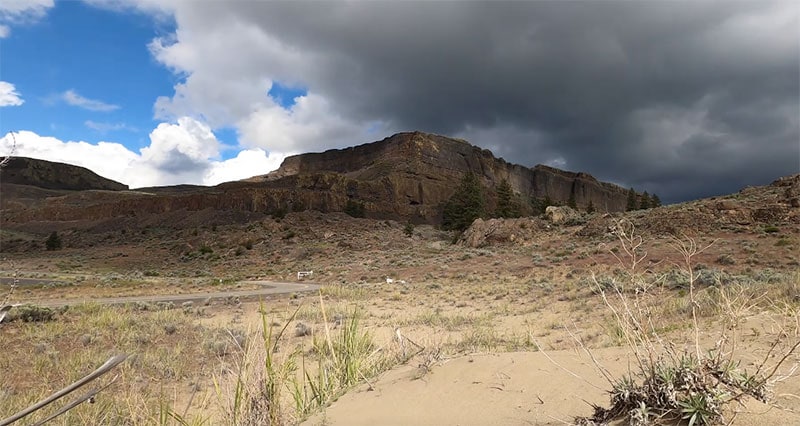 Steamboat Rock State Park is another protected area that’s known for its views. The area spans over 600 acres and rises 800 feet.

By day you can swim, paddle, and boat on Banks Lake. But if you’re in it for the nighttime views, there are 13 miles worth of trails, including the hike up the butte that rises 650 ft.

The views from up top allow for completely uninterrupted skyline. The park closes at dusk to daytrippers, so if you do want to try to see the Northern Lights you will have to camp overnight. 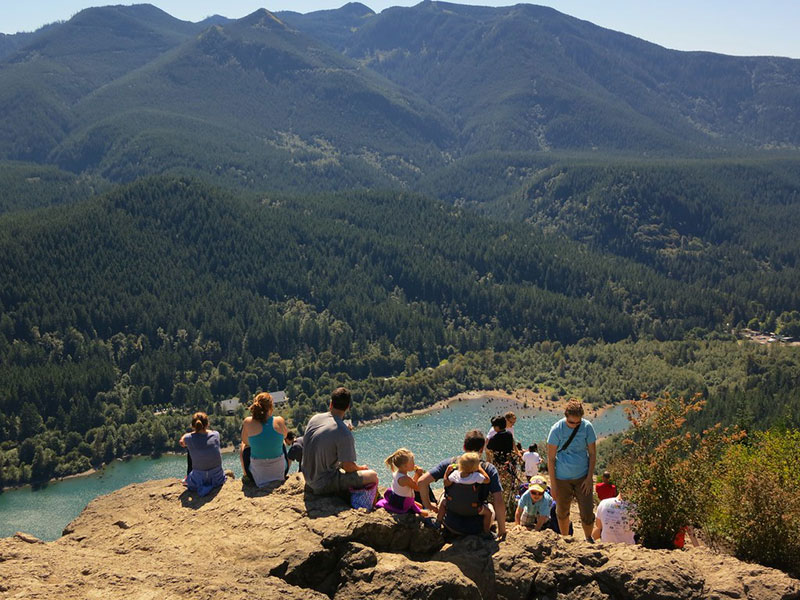 Just east of Seattle is the Snoqualmie Region, Rattlesnake Ledge looks out over Rattlesnake Lake. The trip to the top is four miles roundtrip and steadily rises through a series of switchbacks, gaining 1,160 ft overall.

Only 1.9 miles up the path is a junction that leads you to Rattlesnake Ledge: a large, exposed cliff face, or you can continue further to Middle or Upper Ledge with even loftier views.

It’s free to park and access the trail at any time of day and, while it’s a popular trail during the day, should be quite empty at night.

The panoramic views of the nearby mountains should make for an ideal backdrop to any Northern Lights activity. 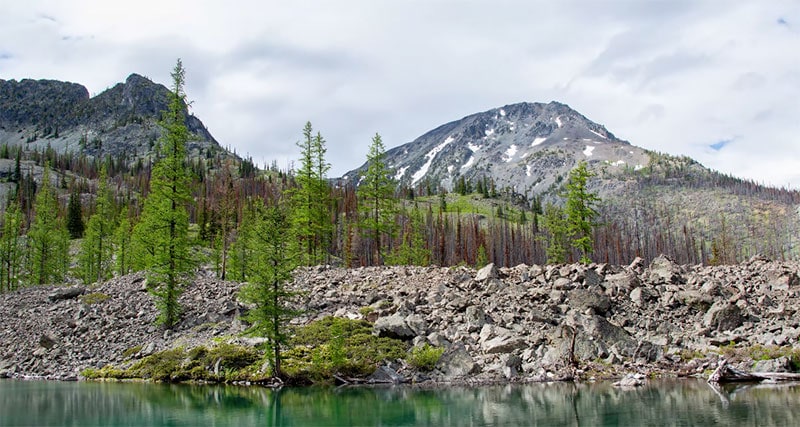 It covers 3.8 million acres of land that stretch along the eastern slopes of the mountain range. There are over 1,200 miles worth of trails that sprawl throughout the forest, but it’s important you are familiar with the area or do your research before going – some will have you deep within the woods, without much of a view.

You will need a National Forest Day Pass that you can buy online and print at home to display in your car. 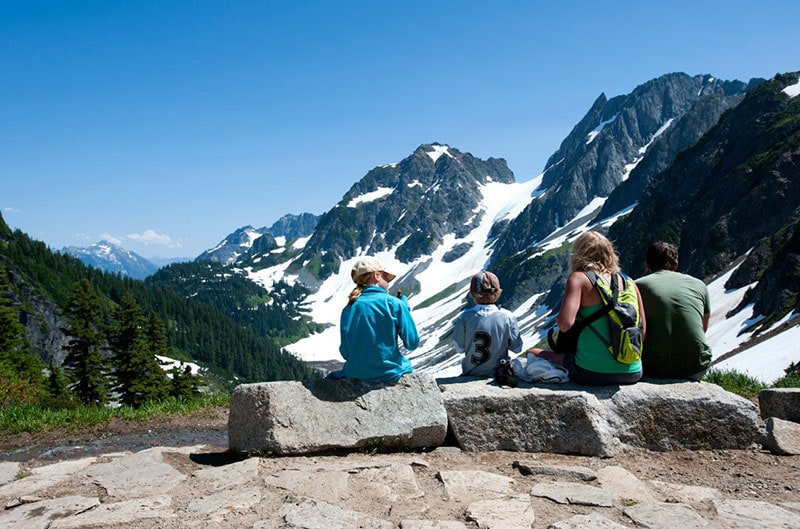 On the opposite side of the Cascades from Artist Point Snowshoe is the Cascade Pass. From the trailhead, you have three options, going 3.7 up to 9 miles one way.

The most strenuous is the mid-distance destination: Sahale Glacier, 5.9 miles away from the trailhead.

Whichever destination you choose, each will afford breathtaking views on their own, but make for an even more incredible background if viewing the aurora borealis.

Be aware that the Cascades are a place of extreme wilderness, meaning that many other creatures call this place home and don’t always adhere to bedtime.

Keep an eye out for deer, marmots, and potentially bears, depending on the season. 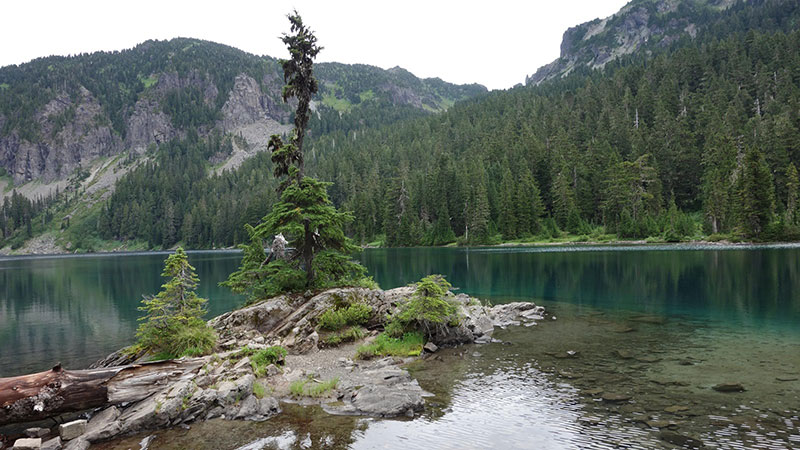 If you really want to get away from it all, consider planning your night sky viewing with an overnight camp at Mowich Lake.

The smallest campsite in the Mt Rainier region, it’s accessible only by foot (though a short walk at that, from the parking).

You carry in all your supplies and would only share the space with 9 other campsites. Be warned, it is first-come, first-serve. Since it’s open July through October, the space can get quite busy.

If you manage to snag a spot, though, there are plenty of nearby hikes with lookouts.

You don’t have to stray far from basecamp, though, as Mowich provide stunning vistas across the lake, which would mirror the aurora as it paints itself across the night sky.

The best part is that fires are prohibited at Mowich Lake, so there’s unlikely to be much light pollution marring your view. 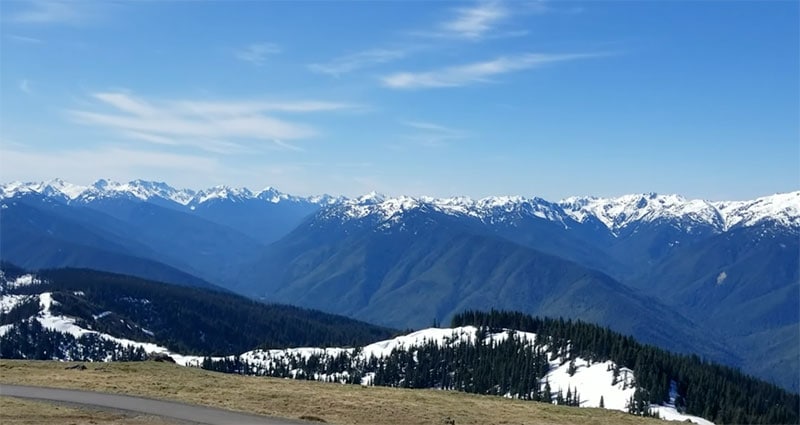 On the northern edge of Olympic National Park is the most easily-accessed mountainscape of the park. Hurricane Ridge’s name sounds more intense than the hiking trails actually are.

There is a Visitor’s Center before the end of the road and parking lots, but it’s only open weeklong in the summer, Saturday/Sundays in the off-season.

However, the whole area is “weather-permitting” through winter, as heavy snow and ice can close the unpaved mountain roads.

The nearest campground is 12 miles away, so it’s likely you’d pick these trails to catch the Northern Lights only if you’re comfortable driving there and back in the dark. 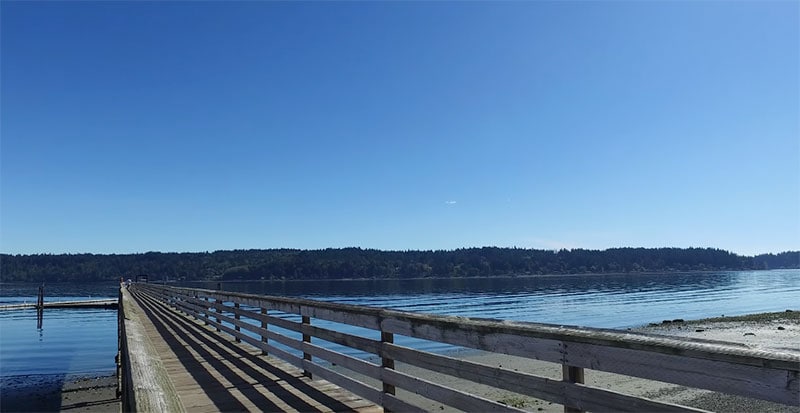 Illahee is a low-altitude option for those wary of the peaks. It’s also conveniently located facing Bainbridge Island, just across the bay from Seattle.

The State Park is covered in dense forest over 86 acres, but opens up with waterfront views stretching over 1,700 ft across Port Orchard.

It has easy access to amply parking (though you need a pass), though the park closes at dusk. If you want to take advantage of any night sky viewing, you’ll need to camp.

You can reserve one of 23 sites year-round and head for a nighttime stroll along the beach on nights the Northern Lights forecast looks promising. 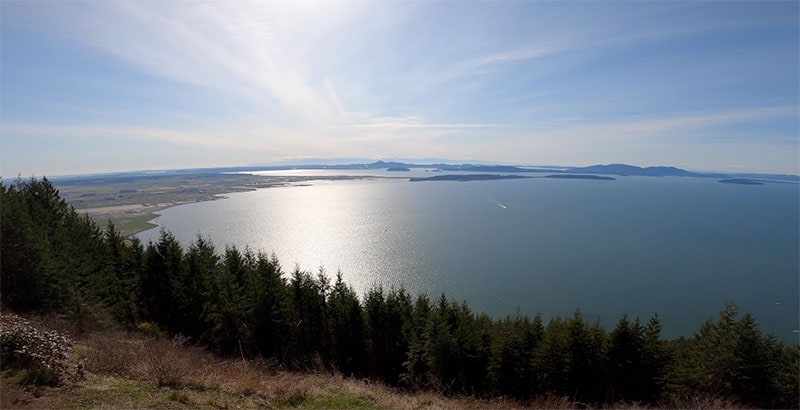 The small town of Samish lies on Samish Bay. If you park at the Oyster Dome Trailhead and make your way up the switchbacks, rather than carrying on left (or north) towards Oyster Dome, turn south to reach the Samish Overlook.

Okay, fine, there’s also an easier way: you can drive up from Blanchard Mountain Trail and park right next to the Overlook, but surely that’s cheating, even if it is quicker.

Whichever way you choose to get there, the Samish Overlook provides a beautiful view over the Bay with the San Juan and Vancouver Islands cropping out of the water on the horizon. It’s a quick and easy trip for a night’s viewing if you live nearby.

Advanced Places To See The Northern Lights In Washington 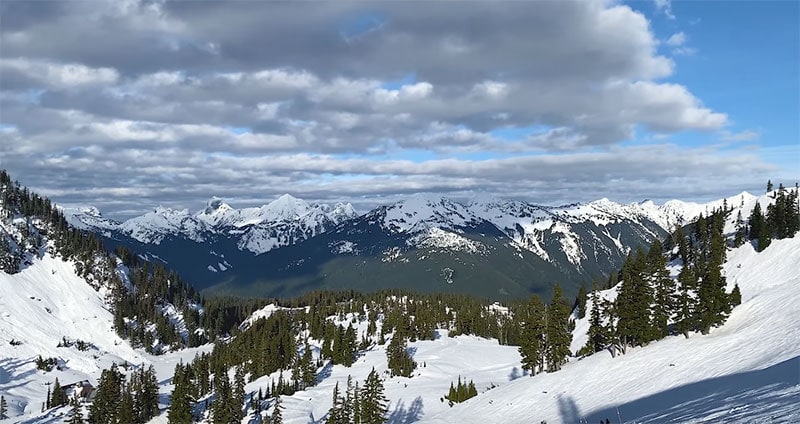 In northern Washington on the border with Canada is the North Cascades National Park, a natural mountainscape replete with conifers, glaciers, and lakes.

Artist Point is a four mile roundtrip trail between Mounts Baker and Shuksan. It is a snowshoe trail that rises 1,000 ft in elevation, but it is perfectly manageable for snowshoe beginners.

From November through June the pass is almost guaranteed to be covered in snow and even holds the world record for most snowfall in a single season. It’s important to check the forecast before going, as conditions are risky in fog or snow and the trail is in an avalanche risk area.

While arguably one of the best views in the state, if you want to go at night for the aurora, we’d recommend the adventure to experienced outdoorsmen and snowshoers. 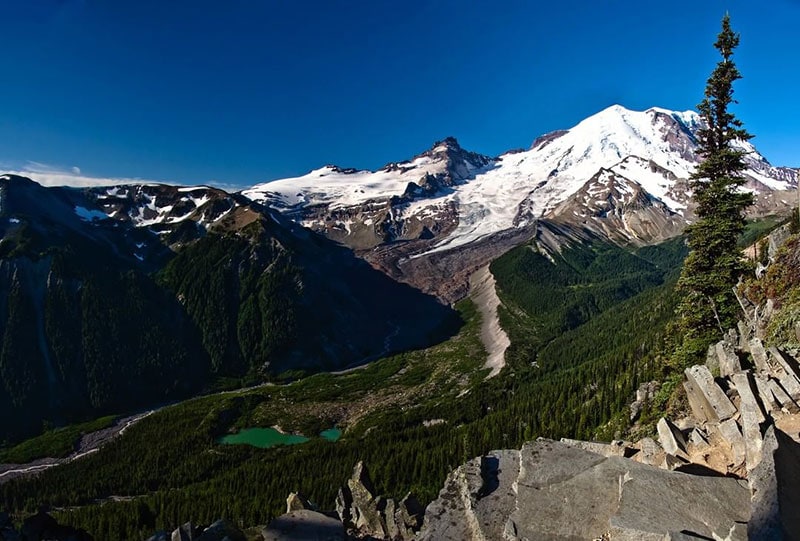 Mount Rainier is well known for being the most topographically prominent mountain and  largest volcano in the lower 48 states.

It is also known for its breathtaking views. The National Parks have a whole page dedicated to sunrise on Mount Rainier.

While the aurora is something to view at night, many of their tips still apply, including those of which hikes are best for picturesque views.

It is important to check which hikes are affected by snow in the winter. You can check the status of the trails throughout the park here.

Tips for seeing the Northern Lights: