On the edge of the Rocky Mountains, at the feet of Pikes Peak, Colorado Springs sits in the Fountain Creek Watershed. Colorado Springs is the second largest city in the state, but has only one brewery listed in Wikipedia. Woefully out of date, we’ve compiled a list of 8 of the best breweries in Colorado Springs. 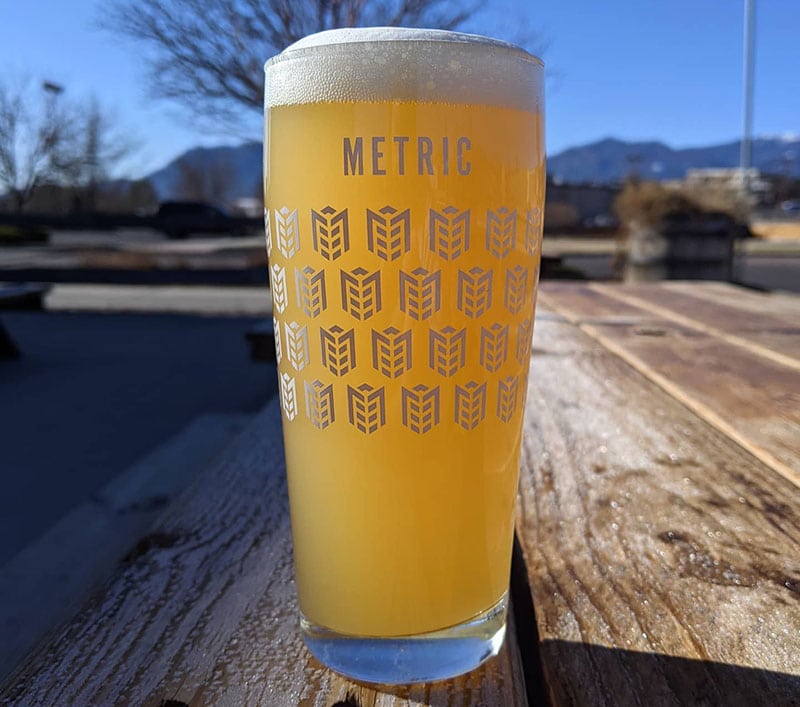 They explore a large range of flavors, from lagers to sours to barrel-aged beers, but in limited quantities. Metric releases new brews each week on Wednesday and Friday.

These exclusive days are important, as Metric doesn’t provide their beer to any local bars or vendors. You have to go to them to indulge.

Their taproom on North Circle Drive is open Thursday through Sunday. They offer fifteen beers on tap, most of which are their own, but they do have some guest drafts.

While they don’t make their own food, you can pair your beer with food from one of the rotating guest food trucks.

Check their website for the menu’s schedule. At the taproom, Metric displays works by local artists and has occasional live music. Go enjoy a taste of the exclusive. 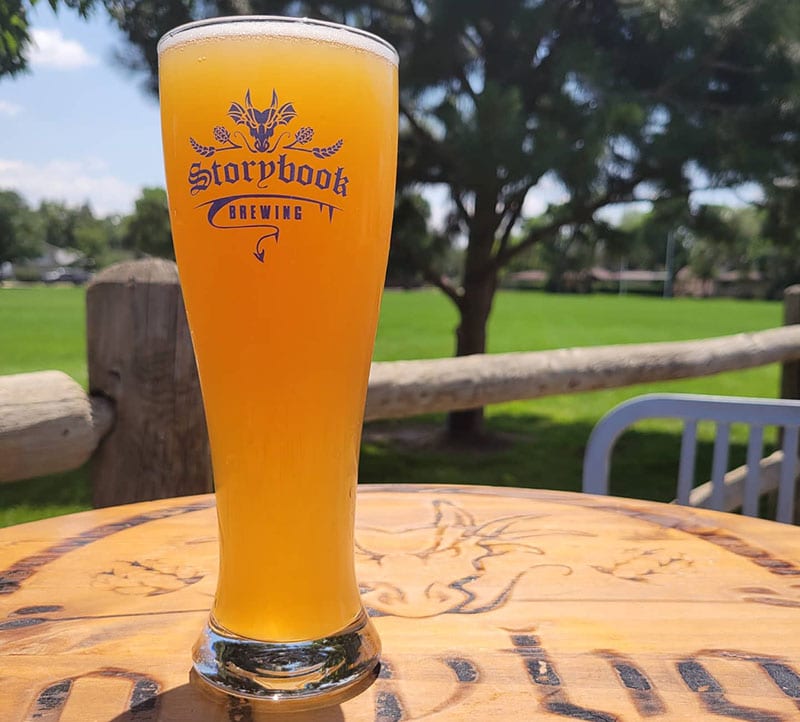 Storybook Brewing’s motto explains it all: “beer that tells its own tale.” This 15 barrel nanobrewery is obsessed with fantasy and good beer.

Their story starts with friends and family who got together to create balanced classics and went on a journey towards success, using innovative new techniques.

The taproom at Storybook is a colorful conglomerate of design, from harlequin tufted leather arm chairs to dragon murals to biergarten picnic tables flanked by fermentation tanks.

You can order from fifteen taps of their own beer. Each month, they plan their guest food truck line-up in advance so you know who to expect.

Drool over Suzanna’s Comfort Cuisine or Thyme to Dine. When you’ve had enough, but don’t want to let Storybook go, fill up your favorite beer in a growler to take home. 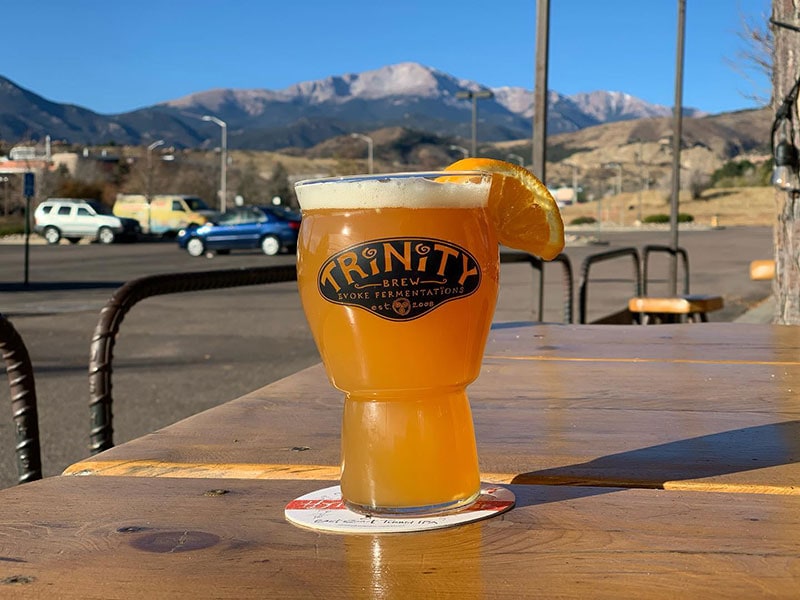 Since 2009, Trinity Brewing has been evoking fermentation. They make unique beers in their sustainably repurposed barns that are home to the brewery and taproom.

They have given recyclable materials new life, like turning industrial wheels into tables and making their bar top out of recycled glass, and welcomed local artisans to add to their space.

The brewery has won many awards, but are the only ones to claim to be the official Green Bay Packer brewery.

In their taproom, Trinity serves all your favorite pub fare – from mac n’ cheese and fish n’ chips, to things without an ’n in them.

They have snack-sized bites and vegan options, plus pizza and burgers of course. You may as well order food first, as Trinity has 43 taps to choose from, not to mention their bottles, wine list, and house cocktails.

It’s no wonder they have an exclusive Mug Membership for avid fans working their way through the taplist. 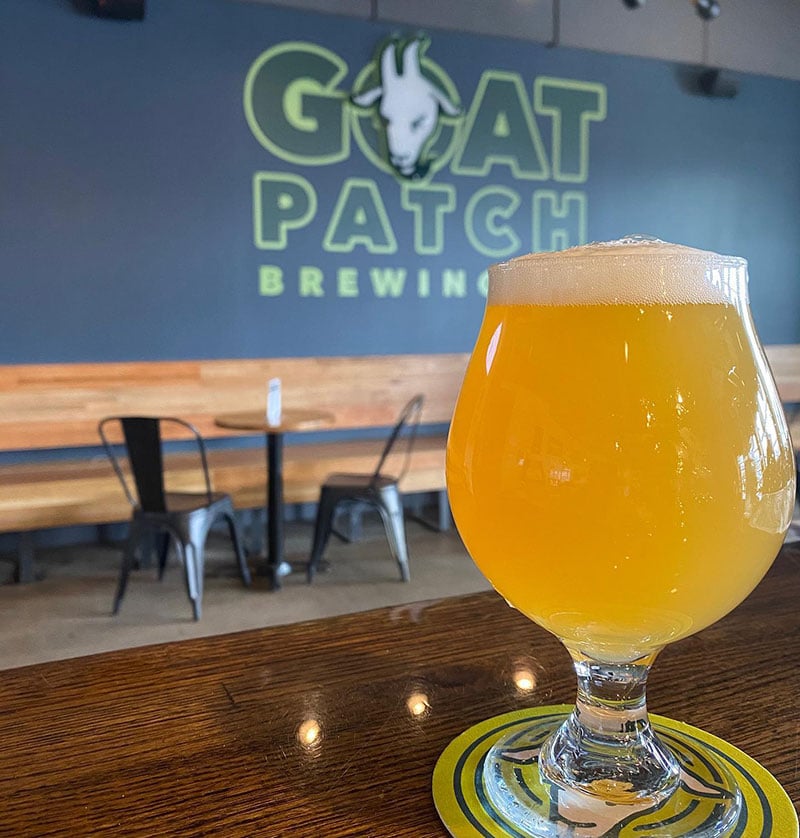 Goat Patch Brewing prides themselves on balanced brews. Their work goes beyond beer, though, as they’re heavily involved in charity work.

Every Tuesday, $1 from each of the products sold in the taproom goes towards their charity of the month. In 2019, they won a gold medal for being Colorado Springs’ Independent Philanthropic Business.

In Northeast Colorado Springs, the Goat Patch taproom has a warm and cozy vibe, with string lights keeping things bright and plenty of space for a couple of people or a large group of friends.

The exposed ceiling echoes the classic warehouse brewery taproom feel, but exposed wooden beams and floors keep it comfortable. Choose from one of their 12 taps that range from IPA to sour to porter. 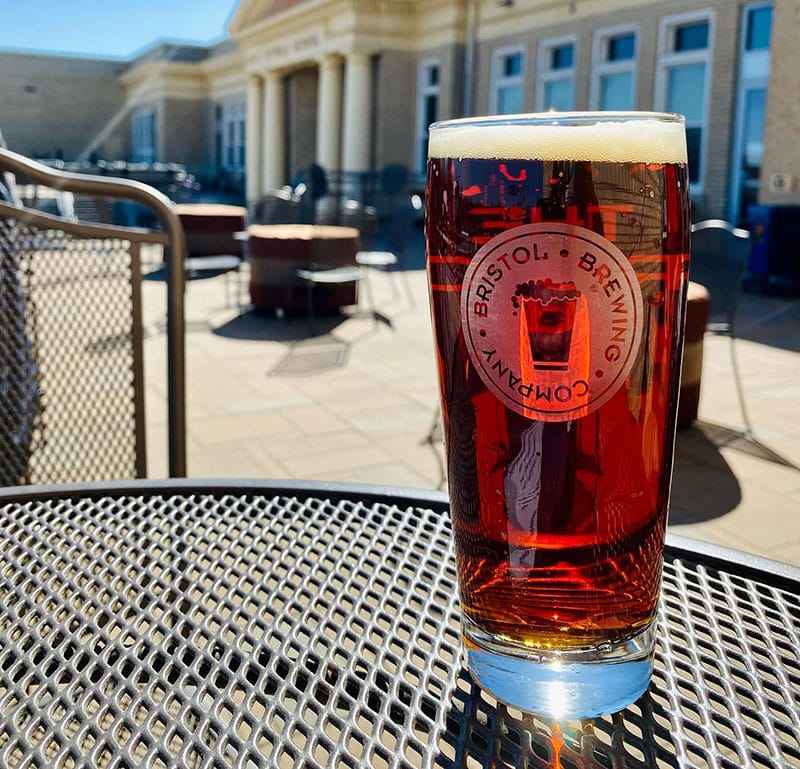 Bristol Brewing Company predates the craft beer craze. They’ve been brewing ales and lagers in the foothills of Pikes Peak since 1995.

They moved to a new, unorthodox location in 2013: a former elementary school. Without changing much in the Ivywild School halls,

Though you won’t be drinking your flight at a one-armed desk, the pub’s menu has a classic composition notebook cover.

There are no bells between periods and you can roam the halls freely, sipping coffee and cocktails in the principal’s office or relax at recess with a pint out in the beer garden.

Their wrap-around bar allows for 360º access to their 13 beer taps. Their huge outdoor space, previously used for dropping off the kids, allows for the perfect event space.

Keep an eye out on festivals – food, music, and beer – they might have lined up. 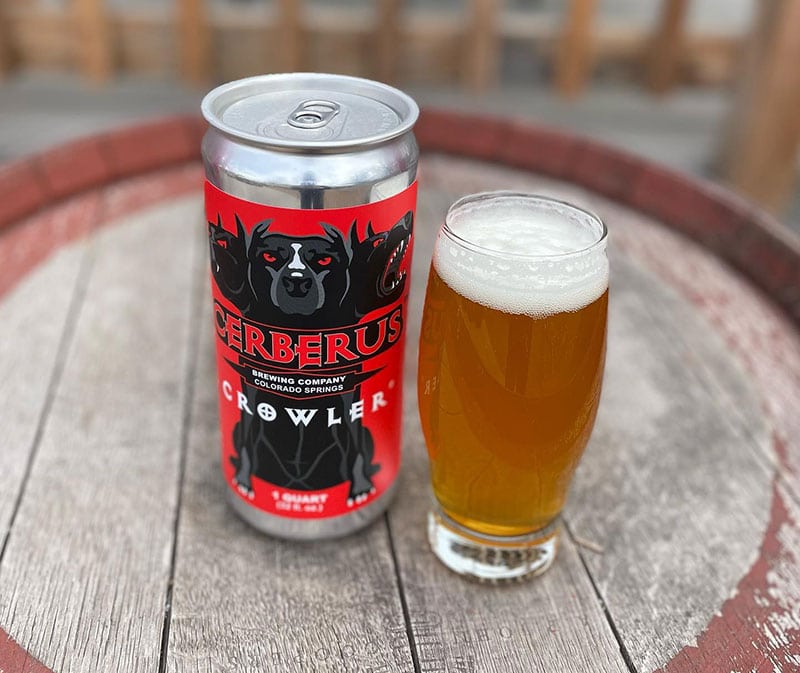 In mythology, Cerberus is the three-headed pet dog of Hades, the gatekeeper to the underworld. Cerberus Brewing Company has been guarding the gates since 2016, producing hellishly good beers, food, and cocktails.

They stick to what they do best and continuously have 21 brews to choose from. Since they’re all always available, you don’t have to worry about falling in love with a limited release you’ll never see again.

Their menu offers lagers, IPAs and pales, Belgians, darks, and sours. They also make their own hard seltzer in three different flavors and their own non-alcoholic cream soda and ginger beer.

When it comes to marketing food, they’re not playing games: you can browse their visual menu online and drool over all the plates before ordering.

Relax in an Adirondack chair in the softly-lit beer garden which offers a more limited menu. Dogs are allowed in the beer garden, but you may want to keep your food out of reach. 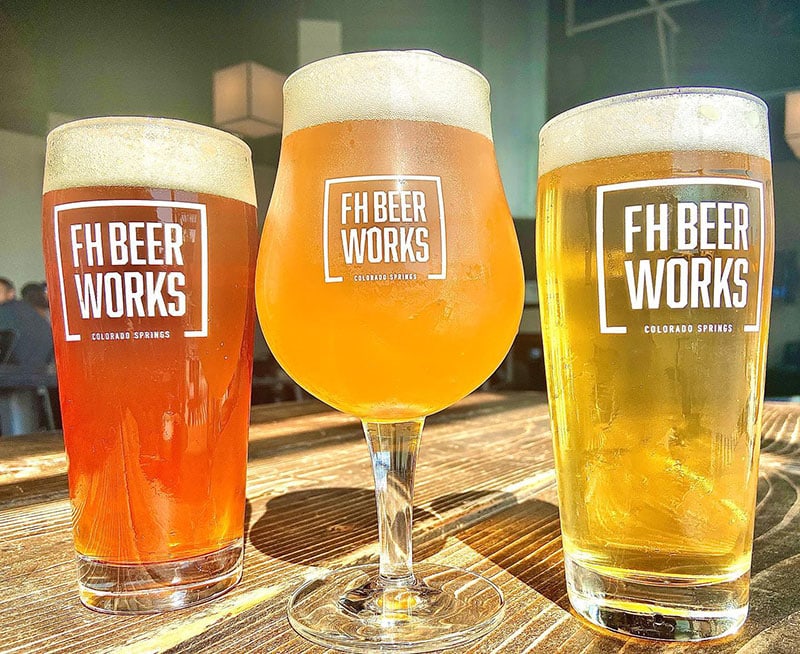 FH Beer Works is a micro brewery in downtown Colorado Springs. They’re the first brewery to set up in the neighborhood for over 20 years.

Their slogan is “Your best life is waiting. Go craft it!” Good news for the rest of us is that FH Beer Works crafts such a diverse range of beers that we don’t have to do anything – they do the hard crafting so we can live our best lives.

At FH Beer Works, there are 17 beers on draught in their taproom, including their gluten free Pink Lemonade Seltzer. They offer flights of four to sample a range of their flavors, crowlers to go, and cans of course.

Drink inside the taproom or bring your well-behaved dog into the beer garden and play a couple games of cornhole in the sun. Hungry? They have a permanent food truck, 1231 Craft Kitchen, serving up a range of tacos and burritos. 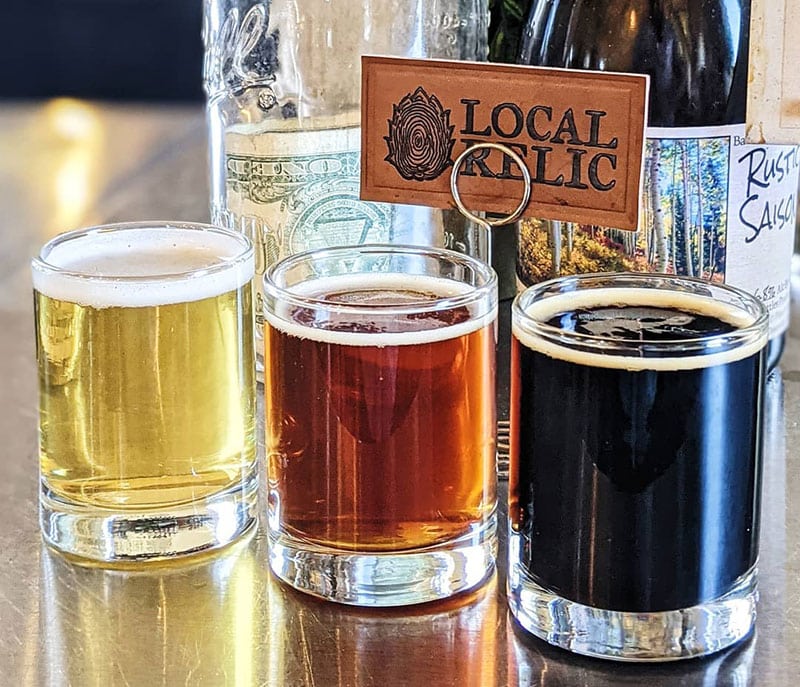 Local Relic is a unique brewery as it’s located in a deconsecrated church. In their awe-inspiring space, they create over 200 different beers every year.

These are served on 18 rotating taps in their taproom and are all bottled so you can take home these limited brews, if you can manage to choose from among the dozens available.

Called Carter Payne, this community building is a holy communion of beer and food. Carefully restored to still maintain its original grandeur, the inside vaulted ceilings are still full of exposed beams and hanging medieval pendant lightings.

It is home to Local Relic and Immerse Cuisine. On Saturday and Sunday, order brunch with BFD (Breakfast For Dinner). Grab a seat on one of the pews still lining the walls and order up.