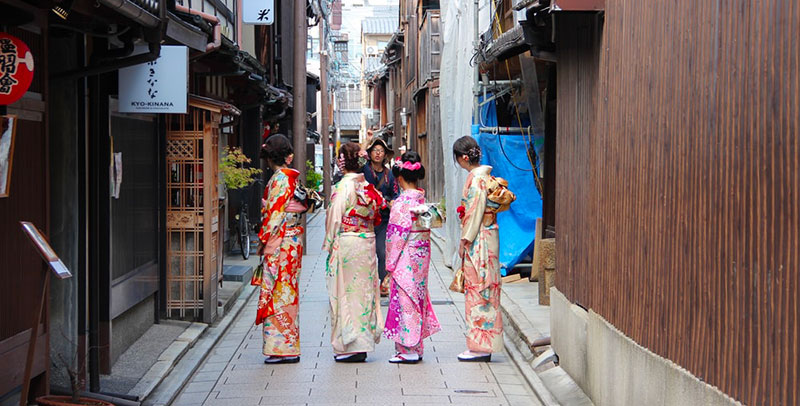 Don’t tip anyone: “Tipping is just not part of the culture. Don’t even leave the small change. People will come running after you with it.”

Don’t wear your shoes in someone’s house: “If you see other people taking their shoes off, do the same. (Note: there’s a small area right inside the entrance called a ‘genkan’ which is usually one level below the rest of the house, where you take off your shoes. You don’t take them off outside the house!)”

Don’t do the Nazi salute: “Not even in jest. It’s a crime and every year there are tourists arrested for it. Also don’t carry any Nazi symbols on you.”

Don’t be overly friendly: “Germans like to gradually warm up to people and take time to really get to know them before acting like BFFs.”

Don’t wish someone a happy birthday before the actual day: “The origin is a superstition that something bad will happen to them (they might die) before their birthday if you do, however this rule is not limited to superstitious people. Even bright, rational Germans will feel uncomfortable because it’s just not done.”

Don’t stare at naked people: “People are pretty relaxed about nudity, and both men and women will for example change on public beaches without any attempt at covering themselves up. You are however expected to look away.”

Don’t unwrap flowers before you give them as a gift: “Germans do this.”

Don’t ask people about church: “Most attend none, and asking this is seen as intrusive, rude and downright weird.”

Don’t expect special treatment: “People are very informal here and being on a first-name-basis with anyone short of the King is the norm. Even the prime-minister of Norway is most often referred to by first name.”

Don’t give an even number of flowers as a gift: “That’s for dead folks. Proper bouquet will have 1/3/5/7 flowers.”

Don’t rely on a credit card: “There are lots of places which only accept cash.”

Don’t assume the people support everything the government does: “Quite often we don’t. Don’t criticize our government. We do it a lot by ourselves, we don’t need your help in that.”

You can get fined for a lot of things in Singapore, including: feeding the birds, spitting, urinating in public, smoking in public, having your pet in public, eating or drinking on public transportation, and littering, among other things.

Don’t disrespect religion: “Almost everyone you meet is religious; religion here is always in fashion, so if someone asks you if you are religious, don’t take offense because it is common for everyone to follow a religion, and around 80% of the population are Christians.”

Don’t be impatient: “Hardly anything runs on time, with an exception of a couple of business meetings and bank closing hours and most other businesses. Everything runs late, don’t get pissed off or impatient, learn to go with the flow, things will happen, just not on time.”

Don’t talk about sex in mixed company: “It is wrong and is frowned upon and people might not want to be in your company after that.”

Don’t confuse New Zealanders with Aussies: “We don’t like it!”

Don’t make fun of rugby, Lord of the Rings, or the Queen of England: “All Blacks is a rugby team and probably a religion. Haka is a war-cry performed before a war or, nowadays, a rugby match. Do not make fun of it!”

“Kiwis are proud of Lord Of the Rings!”

“The Queen of England is still a big deal here! We still celebrate her birthday and swear allegiance to her.”

Don’t freak out about people not wearing shoes: “It’s perfectly normal to go about in public places without footwear, and in some cases a shirt. You will still be served.”

Don’t make the okay sign with your thumb and forefinger: This is considered obscene in Turkey.

Lay off the alcohol: Turks don’t drink much — maybe an occasional glass of wine every once in a while — and being drunk is considered a disgrace.

Don’t blow your nose or pick your teeth in public: Turks consider both of these impolite when done at a restaurant, cafe, or bar.

Don’t kiss in public: “In some jurisdictions this can get you into jail under ‘public obscenity’ (a lot of our laws are stuck in the Victorian era).”

Don’t make physical contact with the opposite sex: “Hugging and handshakes are still frowned upon in most parts of the country among members of opposite sex. Unless the local offers to hug or handshake, don’t.”

Don’t expect a huge amount of vegan options: “Notify people you visit and be careful in which restaurants you go. Very few people are vegan in France compared to some other countries, and although the situation is slowly improving, the awareness and acceptance of it are still quite poor. Some older people especially can consider it a ‘weird’ or even radical behavior.”

Don’t talk about money: “For example, you can tell you quit a job because you were underpaid, but you should not mention how much exactly. There are old taboos about speaking of money in the French culture, many people consider it a ‘dirty’ topic.”

Don’t expect people to speak English: “The French educational system is bad at teaching foreign languages, with an excessive focus on reading and writing compared to conversational skills. Many older people will only know a bit of bad and heavily accented English and/or possibly German or Spanish.”

Don’t patronize people: “We’re a developing country and we’re aware that some stuff is just backwards over here. Don’t ever imply that you are ‘better’ than anyone, especially if that hinges on you being a foreigner.”

Don’t be easily offended: “We have a huge sense of humor as a culture. Nothing is out of bounds for us! We’ll mock, ridicule, insult, pick on and put down just for the fun of it, on a regular basis!”

Don’t be afraid to try everything: “We love it when you try to say that ridiculously difficult word in Spanish, and you’ll be met with proud cheers if you brave a bite out of that horrifyingly spicy pepper, or down that shot of tequila.”

Don’t cut in line: “Queue jump — this is the only crime that the population would consider bringing back capital punishment for.”

Don’t ask how much money someone makes: “Instead play a curious guessing game by asking someone what they do, where they live, where they went on holiday, and figure it out by correlating this with their accent.”

Don’t invite someone to your home: “Unless you know them very very well.”

Don’t say “Top of the morning to you”: “I don’t know how this phrase became associated with Irish people, perhaps it was used in the distant past. But it’s not now, and it’s just really irritating.”

Don’t attempt an Irish accent: “To us there is no Irish accent; there are Cork accents, Dublin accents, Kerry accents etc. For us an accent contains reams of unspoken information about a person (Urban/Rural, social status) aside from the locational information.”

Don’t be cheap: “The classic is in a rounds situation at a pub. If someone is offering to buy the first round, it is perfectly acceptable to say ‘Oh I’m on a budget, I’ll get my own.’ It is not ok to join the round and then not pay for one.”