The Northern Lights, professionally known as aurora borealis, is a natural wonder mankind has marveled at for millennia.

Despite our advancements in science, we still gape at it in modern day. What make such a technicolor display in the night sky even more awe-inspiring is the beauty we find in its simplicity.

What makes it even better is knowing that you don’t have to go far to see it. The aurora can be viewed from very normal locations, even the state of Vermont.

Can you see the Northern Lights in Vermont? 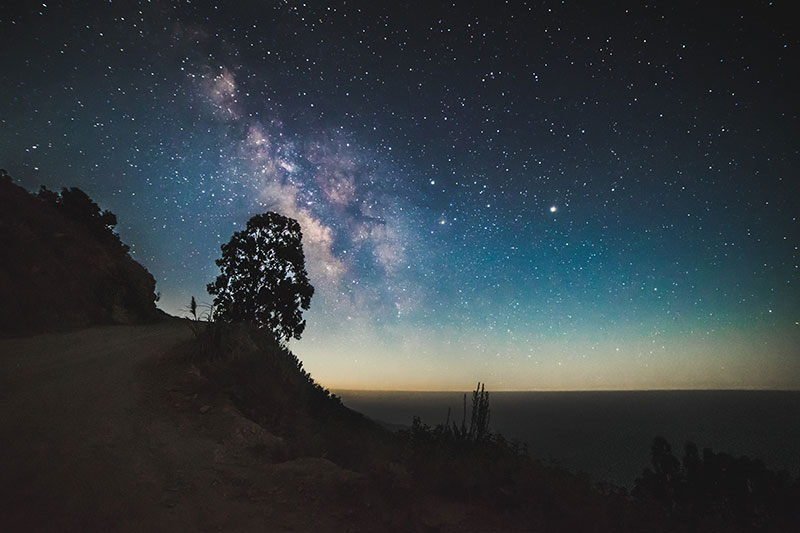 Yes, happily the northern lights are visible in Vermont! The state’s northern location on the globe allows for lots of aurora activity.

When was the last time the Northern Lights were visible in Vermont?

The most recent photographic proof of the aurora was posted online in November 2021. Before that, there was more in October 2021!

A photo taken in Milton, just north of Burlington, proves it. That very same night, someone in Rollinsford, New Hampshire (practically on the Atlantic coast, and much further south) also caught the view, suggesting that people throughout the state of Vermont would have seen the aurora.

How often do the Northern Lights appear in Vermont?

The most recent report of the possibility of seeing the Northern Lights in Vermont was in March 2022 when forecast predictions were high.

However, the news reports that emphasized “may be visible” and “could be seen” were not followed up by photos or eye-witness reports, suggesting that the weather those nights didn’t allow for a glimpse of the aurora.

Give the recent sightings in October and November, then a promising forecast in March, it’s safe to say that the Northern Lights appear very often in Vermont.

What is the KP-Index and how does that relate to seeing the northern lights in Vermont? 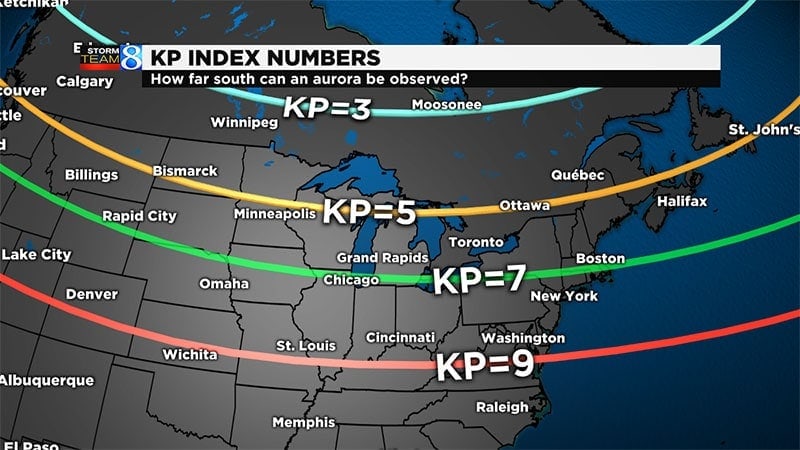 The Kp-index is a forecasted measurement. The same way meteorologists can tell us if it’s likely to rain, they can guess when the Northern Lights will appear by measuring the geomagnetic activity across the globe.

The measurements are taken over a three hour period and rank from 0 to 9, signifying a higher likelihood of the aurora, the higher the number is.

Meteorologists adjust the measurement based on the latitude the recording was taken from so they can determine how likely it is to see the Northern Lights in that exact place.

Any rating of 0 to 4 means that we are unlikely to see the aurora. Latitudes in the middle of the northern hemisphere would need a high rating, such as a 7, to be able to see the Northern Lights.

Latitudes lower than that (closer to the equator) would need an even higher rating – an 8 or 9 – to see the Lights.

Vermont is well situated compared to the rest of the contiguous U.S. According to the Kp-index, a 4 or a 5 is needed for visibility from cities like Minneapolis and Chicago.

Each city sits equal to the top and bottom, more or less, of Vermont’s latitude span. Your location in the state can affect your Northern Lights viewing, but these numbers suggest you could see the aurora in Vermont if the Kp-index rates at a 4 or a 5.

What conditions do you need to see the Northern Lights?

In order to guarantee the best visibility for the aurora, there are a couple of elements to the weather forecast that you need to keep an eye out for:

The best places to see the Northern Lights in Vermont: 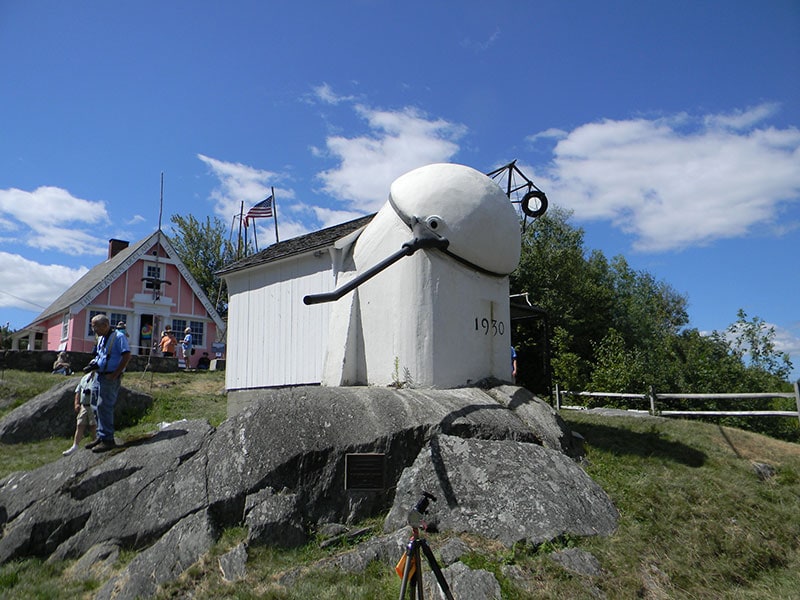 What better place to see the stars (and hopefully the aurora) than a place that specializes in night sky observation? Stellafane is a site ran by the Springfield Telescope Makers, Inc.

They’re an amateur club dedicated to astronomy and telescope making. It is a member society, meaning that they’re not regularly open to the public.

They do offer public events, however, including their yearly convention: a four day event full of talks, workshops, and observing periods.

You can buy day-access tickets or add a camping permit. The only downside is timing it just right: hoping that the Northern Lights forecast is promising on the limited public entry nights.

Live the life of luxury while waiting for that fateful night that the aurora decides to show. A stay at Spruce Peak might be so awe-inspiring, though, that it trumps the wonder of the Northern Lights.

A luxury lodge set in the mountains, Spruce Peak offers high-quality accommodation, a pampering spa, a selection of places to dine, and plenty to do.

If you’re willing to brave the cold, rent snowshoes and get lost (not literally!) in the beauty of an hour-long moonlit hike around Peregrine Lake.

Another place for specialists, the Mittleman Observatory found at Middlebury College is the largest and best-equipped professional observatory in Vermont. They host guided stargazing nights once a week for free from 9pm to 10:30pm, weather permitting.

Mittleman Observatory offers a ton of resources on the night sky, tips for stargazing, and weather reports on all things astronomical.

In the event you can’t travel, the Observatory also offers virtual stargazing events, using their expertise to guide you through the stars.

Like Stellafane, you would have to be lucky to line up a stargazing night with the aurora, but it would mean viewing it beside astronomical authorities. 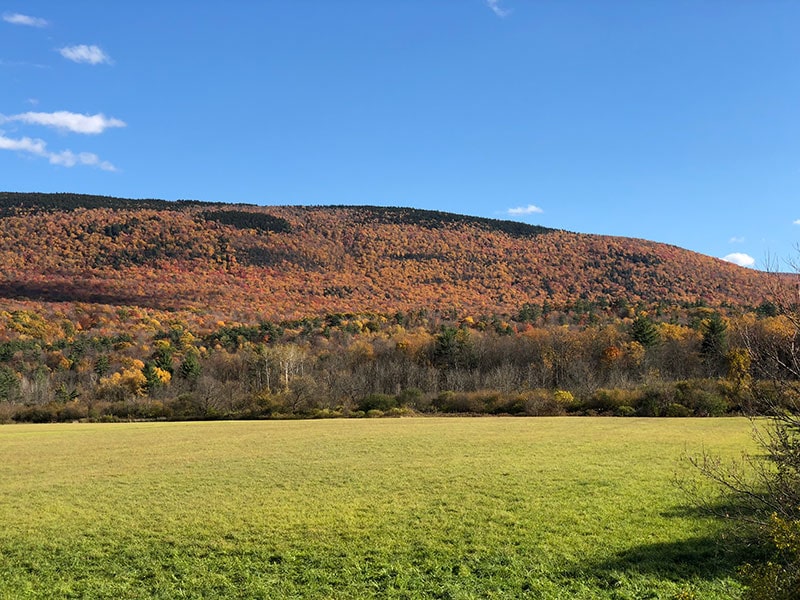 The Green Mountain Forest covers the largest swathe of public land in Vermont. In its 400,000+ acres of land, the forest has over 900 miles of trails, including parts of the Appalachian National Scenic Trail, seven skiing areas, and many lakes and streams throughout.

You can go for the day or camp overnight at developed campgrounds, full cabins, or long-distance hiking shelters for those willing to lose themselves in the wilderness.

Fires on National Forest lands are limited to pre-established fire rings, meaning that a short walk or hike away from campgrounds should guarantee that you won’t have the light ruining your view.

Each island varies in its camping facilities and fees, but they all share one requirement: to access each island, you must arrive by boat.

Only Burton Island has a ferry that can bring you over by car or on foot. The other two require you owning (or renting) your own boat to access the island at your leisure.

With the remote element of these islands and the lake as a dramatic backdrop to the night sky, what more scenic location could you want?

If you don’t own a boat or don’t want to camp overnight, Causeway Park is an alternative to the islands, in the same place and with equally great views across Lake Champlain.

It’s a non-motorized road that stretches from the tip of Colchester across to Grand Isle. The Causeway is a gravel path that you can walk or bike along.

It runs four miles from mainland to island. There is free parking right at the start of trail and you’re allowed to bring your dog as well.

It’s an easy access option with breathtaking views, ripe for a mirror image of the Northern Lights across Lake Champlain.

Groton State Forest is a mere half hour away from Montpelier, Vermont’s state capital, but is still home to a range of flora and fauna, even including bears.

There are 19 different sets of trails to explore in the the 26,000 acres of forest and some designated camping areas throughout.

Perhaps the best place to aim for to view the Northern Lights is Owls Head Mountain, whose summit offers panoramic views of the area. An ideal spot to view the aurora.

The forest is open year ‘round, putting no limit on the time of year when you can catch the Northern Lights. 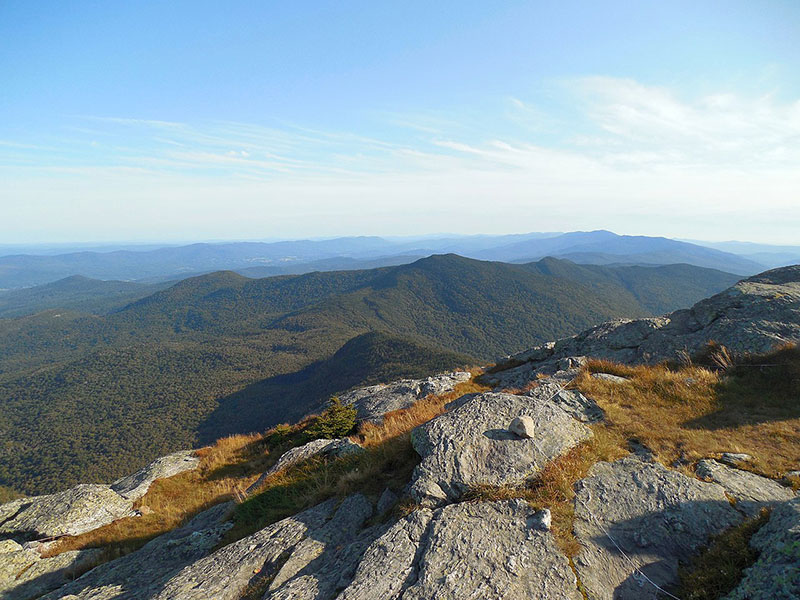 Camel’s Hump State Park is the largest State Park in Vermont, a completely undeveloped area covering over 20,000 acres of land that’s been protected against development.

For a real natural experience, you could choose Camel’s Hump as your Northern Lights viewing destination and spend the night hiking along the Monroe or Burrows Trail or sit back and relax just outside your tent.

There is overnight camping in several places throughout the park, so you can spend the night in relatively untouched nature, far from civilization, alone with the aurora. There is a two night limit on camping, though, so plan accordingly.

Tips for seeing the Northern Lights: