With so much allure and hype surrounding big cities like Sacramento and San Francisco, people rarely take the time to appreciate the other cities in California.

The state has so much to offer, with loads of natural wonder, cultural history, and modern amenities that no small town should go overlooked.

Whether you already live in Riverbank, are thinking of relocating, or happen to be passing through, it’s an interesting city with lots to do and see, even with the teeming metropolis of the Bay Area nearby.

The city of Riverbank took its name from its obvious location: it sits on the banks of the Stanislaus River. It wasn’t always known as Riverbank, though. In the 1850s, the city was originally called Burneyville after the Burneyville Ferry which was founded by Major James Burney.

The ferry was a vital mode of transport back then, made to bring travelers across the Stanislaus River. Today, the bridge in Riverbank marks the original route of the ferry.

What is Riverbank, CA famous for? 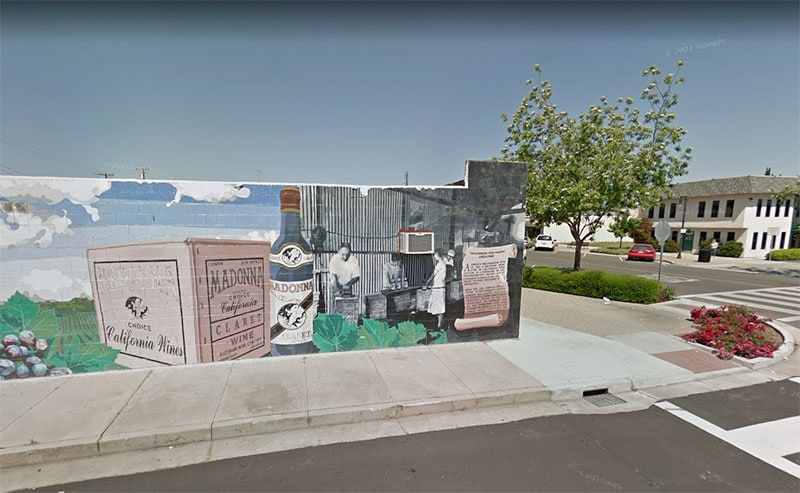 While Riverbank itself isn’t famous for anything in particular, it sits in an area surrounded by Californian history.

It sits on the doorstep of Modesto, the town that inspired George Lucas’ 1970s cult classic American Graffiti and itself played a role in the iconic ‘60s open road dream.

Significantly less glamorous, but more indulgent, Riverbank is home to a yearly Cheese and Wine festival, held over two days in October.

Where is Riverbank, CA

Riverbank is close to the Bay Area, sat in the middle of California. The closest, largest city to Riverbank is Modesto. In fact, it’s only 15 minutes away by car.

To get into the big cities like Sacramento, San Francisco, or San Jose, it’d take up to an hour and thirty minutes to drive – making Riverbank residents more likely to spend time locally.

Riverbank is in Stanislaus County, California. It sits just east of the San Francisco Bay Area and is considered a bedroom community, or commuter town area, of the city.

The seat of Stanislaus County is Modesto which is home to over 200,000 people. In comparison, Riverbank only has about 25,000 residents.

Referred to as the “City of Action,” Riverbank has proven itself by more than doubling in population the last thirty years.

What to do in Riverbank, CA: 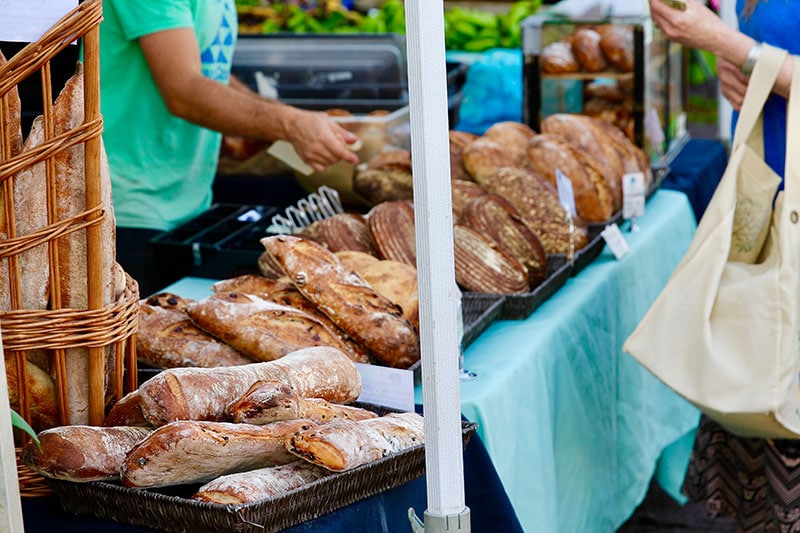 Recently, the Riverbank Market has rebranded. Previously known as a farmer’s market, the event has changed its name to the Riverbank Downtown Market to better reflect the variety of vendors it hosts.

They’re home to over 50 vendors with stands that offer goods such as hand-poured candles and handmade soaps from local artisans.

Of course, there are still food stalls offering treats like fresh baked sourdough bread, agua fresca, and quesabirria. The market had ran for 20 weeks in the past, but it is only scheduled to run for 8 weeks in 2022. It’ll be set up in May and June on Tuesdays from 5-8pm. 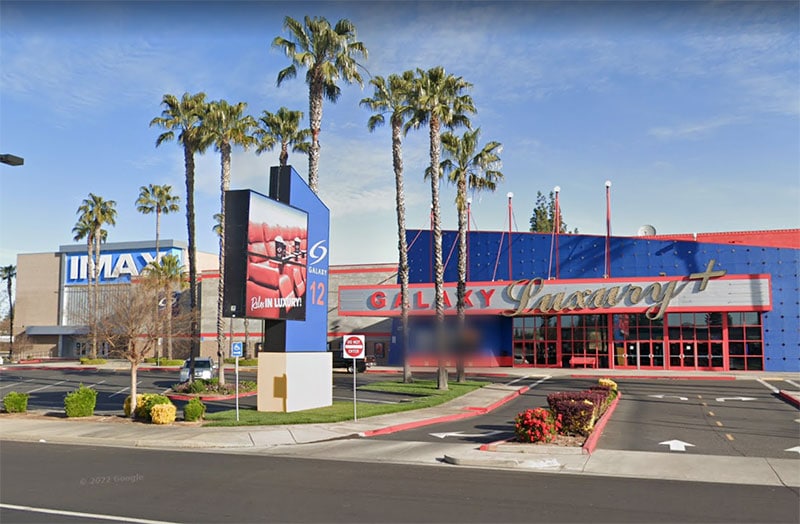 Spend a relaxing afternoon or settle in for a nighttime screening at The Galaxy Luxury+. The façade of this movie theatre in Riverbank looks like a blast from the past with a light-up sign made of individual bulbs, Old Hollywood style.

It’s not missing any modern amenities, though. The Galaxy Luxury+ offers recent releases in standard format or in an IMAX theater.

You can complement your viewing with the usual round of movie snacks like popcorn, pretzels, and jumbo sodas, but know that there is also a full service bar for the adults to indulge in. 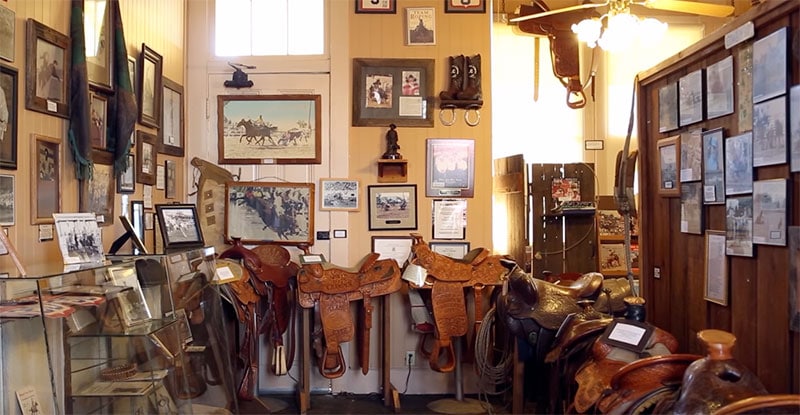 The Wild West often comes off as this Hollywood myth of expanding America. While not every rootin’ tootin’ cowboy tale is true, they did come from real life inspiration.

The Cowboy Museum in Oakdale, just up the road from Riverbank, memorializes it. The exhibits in this non-profit museum tell the story of the American West in the 19th and 20th centuries. Their ephemera protect and help to teach California’s cultural history to visitors.

Admission is free, so pop in Wednesday through Saturday and immerse yourself in the crafted leatherwork, early examples of photography, horse riding accessories, and more. 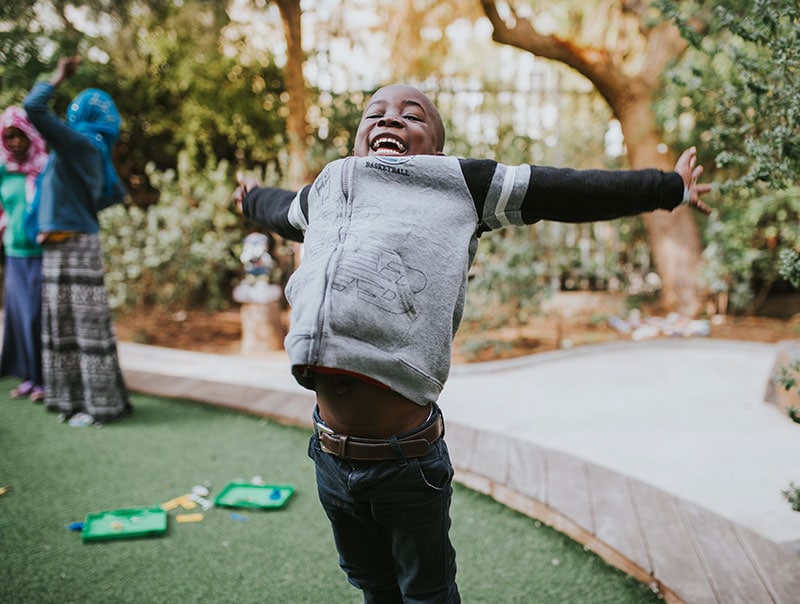 Funworks is a place of unlimited family fun. The options are endless for what you can get up to – from mini golf and batting cages to bumper cars and go karts, there’s plenty to keep you active all day.

There’s also a complete arcade full of games to compete on, an XD theater with motion-simulated ride, a build your own teddy bear factory, and holographic interactive games.

If you’re more into the age-old classics, grab a bowling lane and aim for a strike. It’s easy to spend a full day at Funworks, which is made possible by the Pizza Company who’ll keep you fueled up for your day of fun. 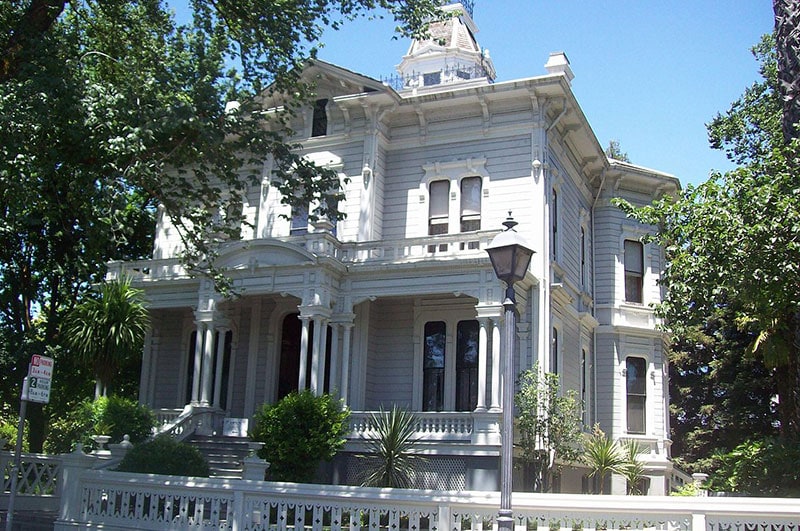 In Modesto, the McHenry Museum is dedicated to the history of Stanislaus County, the home of both Modesto and Riverbank.

It is a non-profit organization that is home to interactive exhibits about the county’s past 200 years of history and the county’s Historical Society.

This home was actually once a public library, granted by its namesake, Oramil McHenry, who left the funds and parcel of land upon his death to the county.

The library was built in 1911 and still stands as a testament to local history. It is free to visit and open to the public on Friday, Saturday, and Sunday from noon to four. 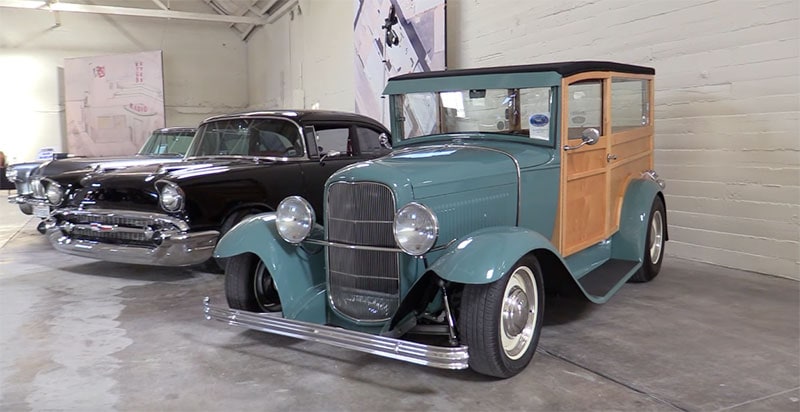 For those interested in a fast-paced lifestyle, but not willing to put their neck on the line, the Graffiti USA Classic Car Museum lets your admire classic cars built for racing without getting behind the wheel. Modesto is a car-lovers haven as it was the site of American Graffiti, the famous ‘70s cult film by George Lucas. The museum honors the history and culture of classic cars and their ties to rock ’n roll history. Go back in time to the era of bench seats, tailfins, and hood ornaments.

If you prefer to get away from the hustle and bustle of the suburbs, go get lost in the Woodward Reservoir Regional Park. A half hour drive out of Riverbank brings you to 3,700 acres of land for hiking, sports, picnicking, permit hunting, and more.

You can also swim, fish, and boat, as the park is covered by 2,900 acres worth of the reservoir with many coves to explore and an island to jetski to.

If you really need a break from urban life, camp overnight. There are options for dry camping or RV hook-ups.

Where to eat in Riverbank, CA: 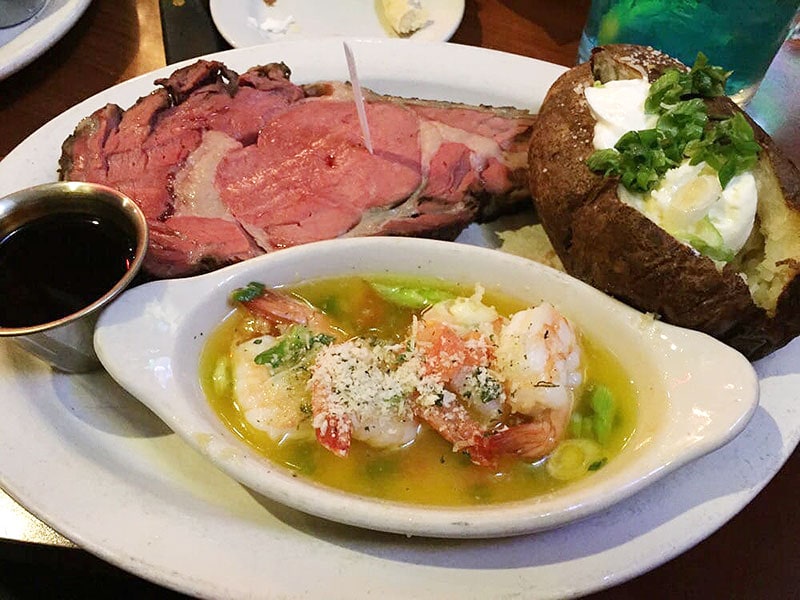 Cool Hand Luke’s Steakhouse and Saloon is everything Wild West. Its decor brings you back to a time of fast shootin’ and rustic fare.

While you could have some shots in the saloon, you can also opt to indulge in a Jim Beam Bourbon Salmon or a vanilla ice cream topped with Brandy Butter sauce.

And the only thing rustic about Cool Hand Luke’s is the atmosphere. All of their signature steaks are made with corn-fed beef aged for 28 days. You can enjoy the full experience dining in or order take-away. 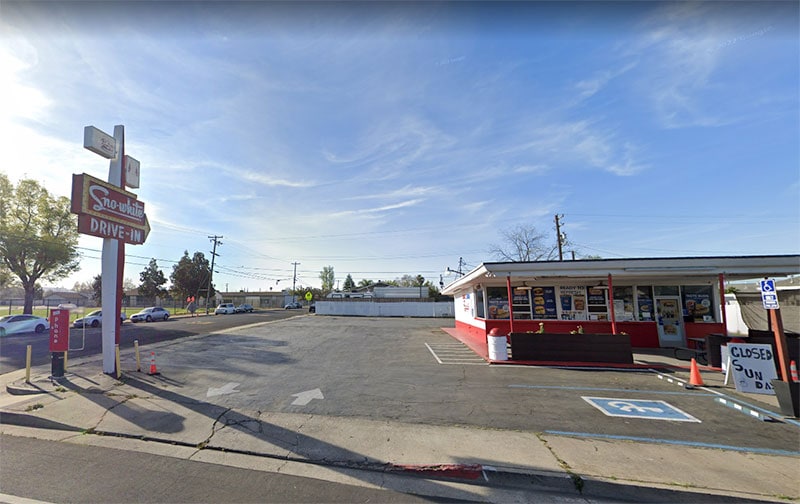 For a quicker bite to eat, head over to the Sno-White Drive In. They have been serving the classic burger, fries, and a shake since 1952 – obvious from the original sign that is posted in their parking lot.

As the only location, the Sno-White Drive In in Modesto is a must-visit, small business compared to the corporate alternatives.

They claim the best burgers in Modesto, paired best with thick crinkle fries, but also offer a range of other snacks: calamari rings, nachos, quesadillas, breakfast sandwiches – even fried Oreos! 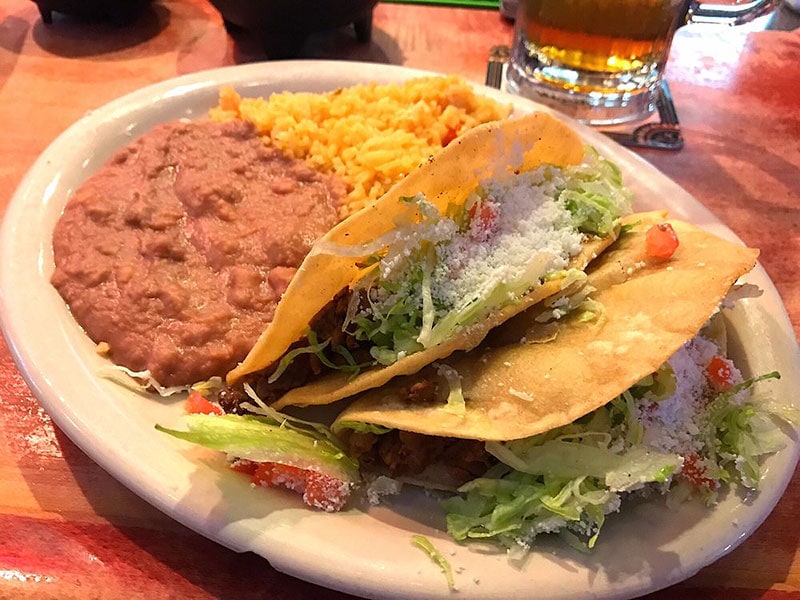 Another great option for supporting local, La Parrilla is a family-owned restaurant that first opened in 1999. Since then, the restaurant has grown in popularity to the point of opening another two branches.

The Riverbank restaurant opened in 2006, serving the same beloved classics as the other restaurants. Order mouth-watering fajitas, quesadilla, burritos, and more.

Their signature is La Parrilla Molcajete for two: chicken, steak, and shrimp served over rice and beans with their signature sauce in their flaming hot lava bowl. The best part about this branch is that the Riverbank location has a full bar to complement your meal.