Burbank often gets flak for being in the Valley, L.A.’s little suburban brother, not as good. But joke’s on the haters.

They can keep their L.A. hotspots, because Burbank has delicious restaurants coming out its ears. You don’t have to go into the tourist-filled sections of the city.

In fact, many places on this list are hidden gems only known to locals. Live in Burbank? Visiting? Don’t worry, there’s plenty to eat.

The best restaurants in Burbank, California: If you are ever in Burbank, you absolutely need to visit Porto’s. It’s absoutely lives up to the hype that it gets on Yelp and social media.

At heart, Portos is a Cuban American eatery that focuses on Latin specials and desserts. They serve up southern classics such as tamales and croquetas de pollo or de jamón.

They also blend cultures in snacks like their baked ham and cheese croissant. For dessert, you can rely on having bakery classics alongside their signature tres leches cake.

The only downsides is that the lines can be incredibly long, however the pace at which the workers serve people doesn’t have you waiting too long.

The potato balls, guava rolls, or the classic: a Cuban sandwich. 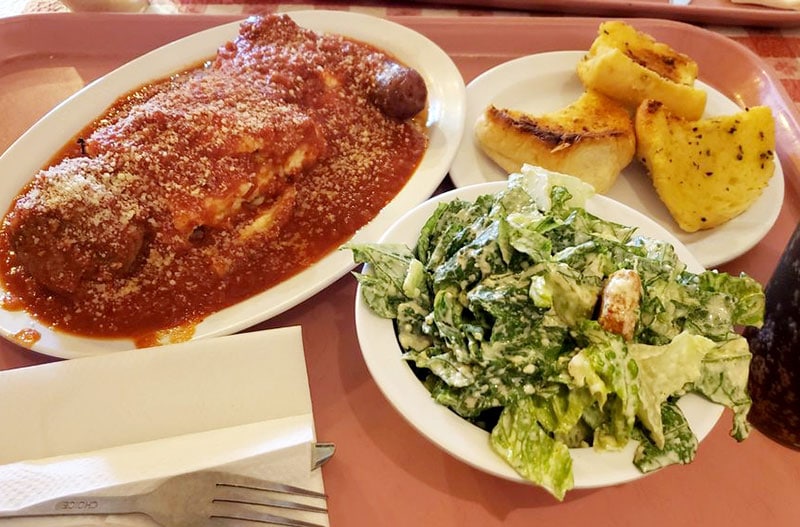 Since 1971, family-owned Pinocchio Italian Restaurant has been serving American Italian classics in a casual setting seven days a week.

Sip a pinot on the patio, indulge in a cappuccino and biscotti, or go all-in with their eggplant parmesan.

They have old world charm from their deli counter, through the dining room, to their 24 flavors of gelato and sorbet. They even offer food to go and catering options.

You can’t go wrong with sphagetti and meatballs. Also their delicious sandwiches are stuffed to the core and come with 2 hearty sides. Leave some room for a cannoli. 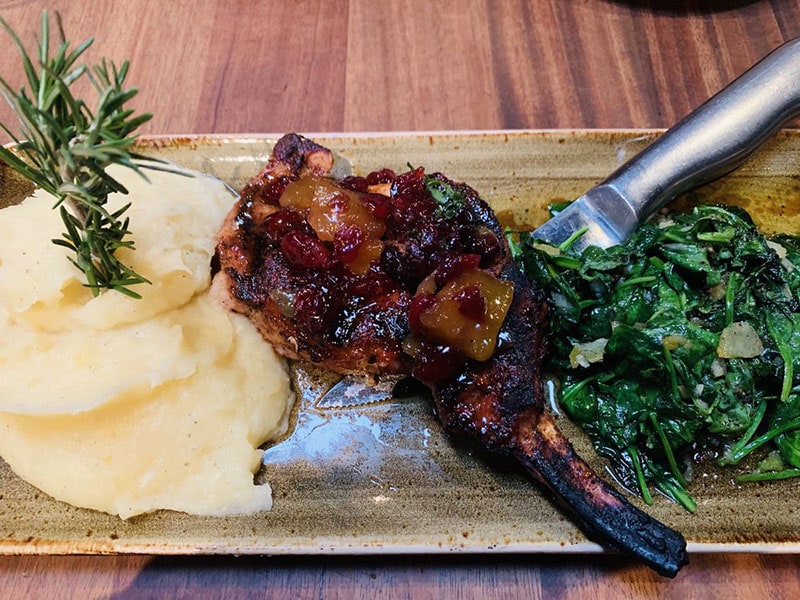 Don’t let its name fool you, Granville is miles away from a casual café. The restaurant is an experience, starting with its sleekly designed dining room and continuing on through their “village” of flavor.

They stock their modern-casual restaurant with fresh, high quality, sustainable, and organic ingredients for dishes that are prepared from scratch daily.

They have a range of flavors from their lunch poke bowl with sashimi-grade ahi to beef stroganoff to a turkey club sandwich. The Burbank location doesn’t take reservations, so it’s first come, first serve. 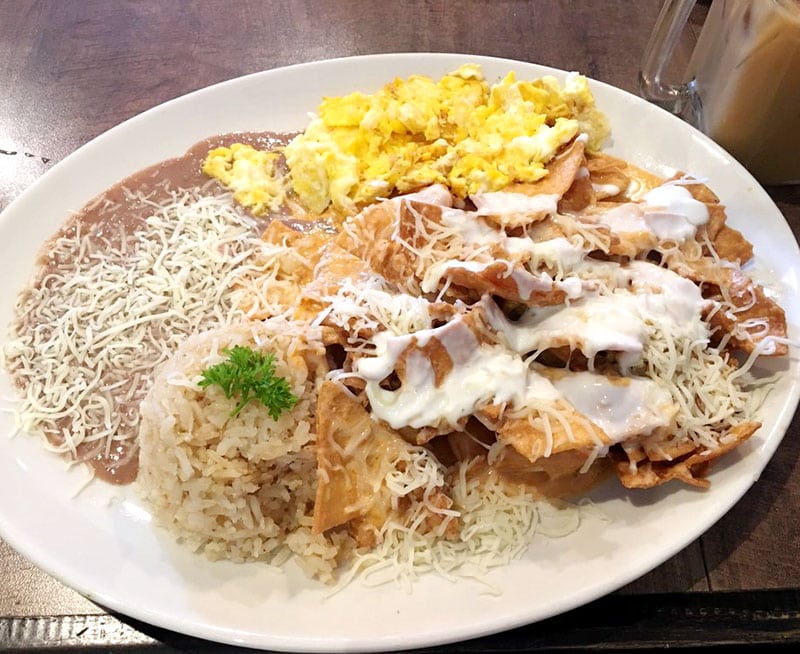 Café de Olla is a family-owned traditional Mexican-American restaurant specializes in authentic home-style dishes. What makes it stand out from others is the fact that it’s a breakfast and brunch restaurant.

They stay open for dinner Thursday through Saturday, but every day of the week they’re mostly serving omelets, French toast, pancakes … and breakfast burritos, of course.

Their breakfast menu is massive and mouthwatering, with an especially unique Mexican Breakfast section of dishes. The restaurant is named for the the traditional Mexican coffee made with boiled cinnamon sticks and piloncillo, so you’ll have to order a cup. 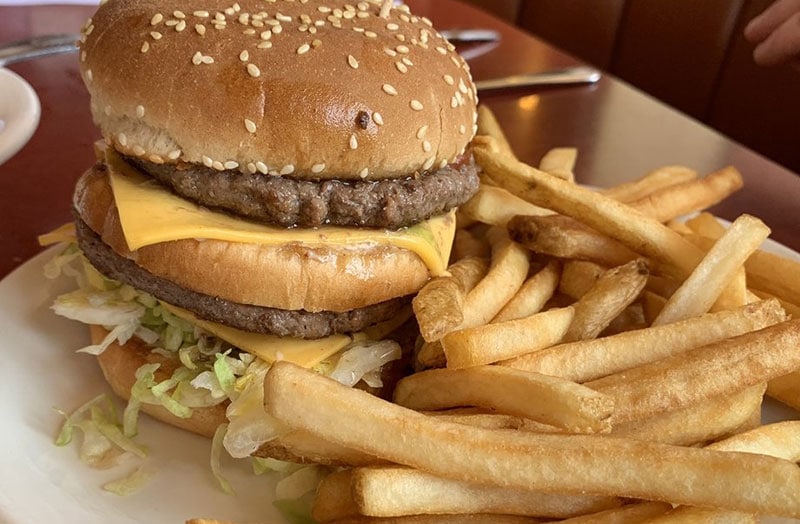 But did you know that the Beatles had a meal there during their 1965 tour? Fame isn’t even the half of it at Bob’s, where double is king – they still offer the “Original” Big Boy Combo: a double-decker hamburger with lettuce, cheese, mayo, and red relish.

Along with burgers, they have fried chicken, chili, and other entrees. Fast food heaven, paired with a traditional root beer float.

The Original, of course! The breakfast here is phenomneonal too! 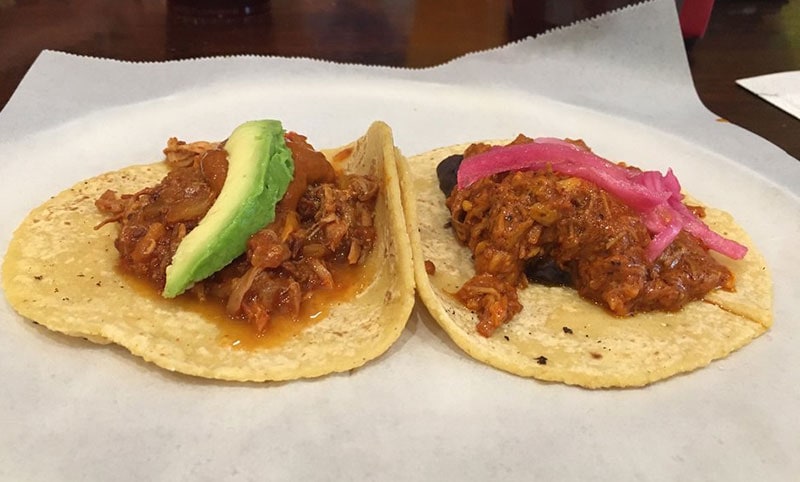 Guisados is known for their simplicity. They braise their own fillings the traditional, homestyle way and make their own fresh, handmade tortillas.

What do you order? Tacos. The menu has 17 different options, now including two vegan options, and two quesadilla choices.

The only thing you have to hem and haw over is what flavors to get. Some people work on ticking off all the tacos visit after visit. Pair your meal with an agua fresca or cool horchata. That’s it, that’s Guisado’s. Simple. Their to-die-for tacos speak for themselves.

Steak picado, pescado, and camarones. Chicharron if you still have room. 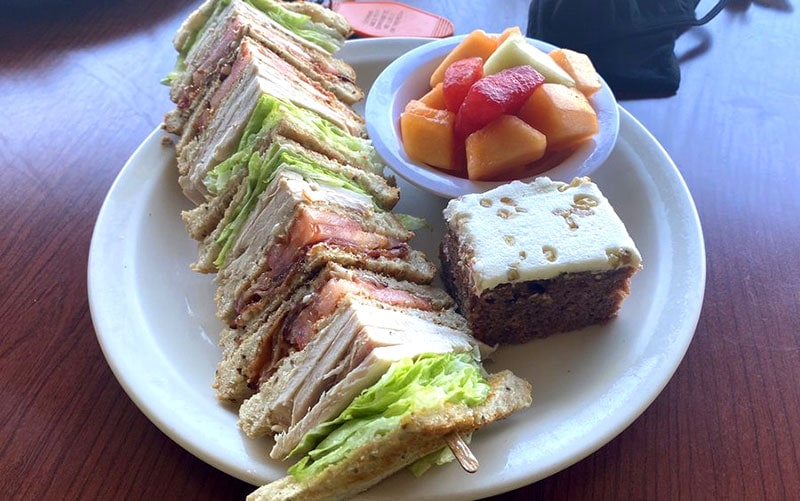 If you’re looking for an old school vibe, Tallyrand is a blast from the past. It’s an homage to the classic diner – rather, an homage to itself, since it’s been open since 1959.

They focus on American classics, serving breakfast, lunch, and dinner, with a short break from 2-4pm in between.

All of their baked goods are baked, their sauces and dressings done-up, and their mashed potatoes mashed in house every day.

They even roast 200 pounds of fresh turkey. Every. Day. With just about everything you could want on the menu at a restaurant that’s regularly won “Best of Burbank,” what are you waiting for?

They have daily specials and their soup of the day is always chicken noddle.

Some of that turkey, just to put a dent in it. 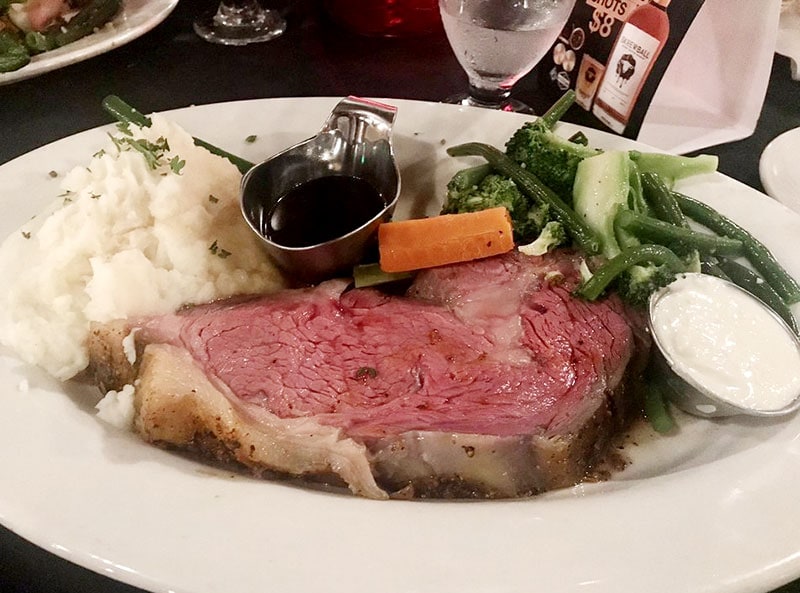 Look familiar? You may not have been here before, but you’ve certainly seen it in movies like La La Land and Argo.

The Smoke House Restaurant is one of the most iconic eating establishments ever seen on the silver screen.

There are pictures on the wall of some of Hollywood’s greatest known artists, hung over iconic red tufted booths. It’s been a favorite haunt of Bing Crosby, Judy Garland, and George Clooney – to name a few.

You’ll be dining with history in an establishment founded in 1946 rife with the memories of Hollywood past and present.

Even their world’s greatest garlic cheese bread is historic, dating back to 1950! Rest assured that all the food is fresh and well worth the experience. 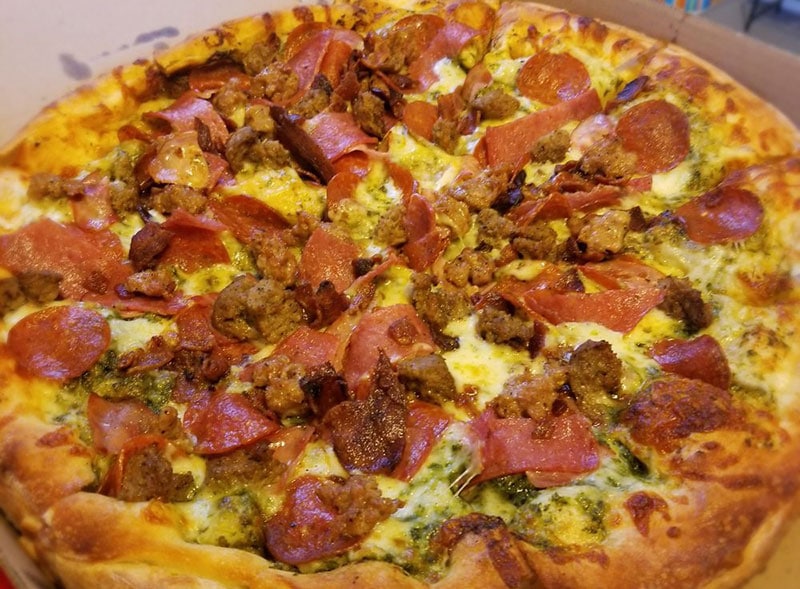 Everyone needs a good, reliable pizzeria. Dino’s is the place to go in Burbank. They promise real food and no cut corners while keeping their menu simple: pizza, salads, sandwiches, and spaghetti.

Eat in for that classic pizzeria ambiance, with wipe-down, red and white checkered tablecloths, Americana decor, and a statue of a chef to greet you.

Go for a single slice, or order a pie for everyone – they have close to 40 different specialty pizza combinations! Or you can just peruse the toppings list and create your own.

They also offer over 20 different salads and 12 different dressings. The building is topped with a big “Eat” sign, and we think you should do exactly that. 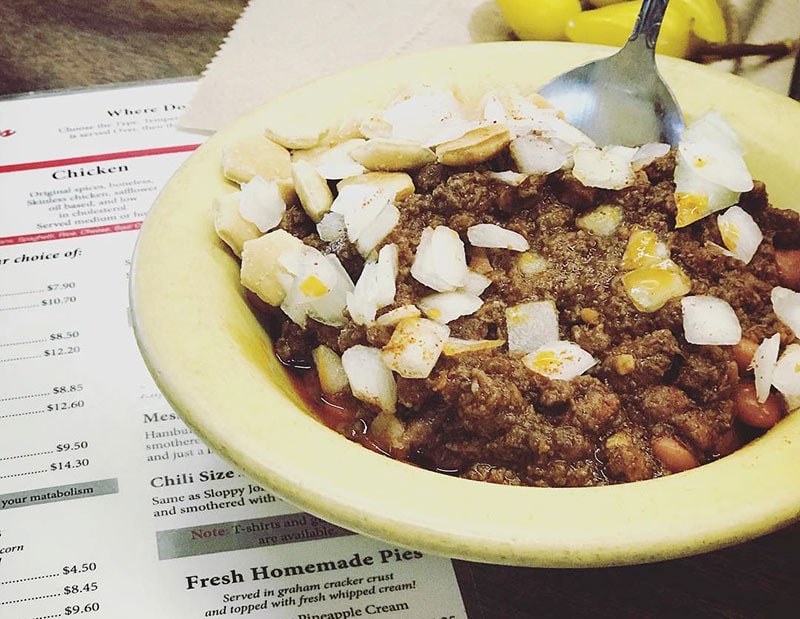 Another longtime contender, Chili John’s has also been open since the first half of the 20th century. In fact, it’s the longest running restaurant that has remained in continuous operation in Burbank since 1946.

They spend ten hours on every single batch of chili they make and use a 100 year old recipe that was trademarked under their name in 1902. From outside in, everything at Chili John’s is rustic.

The first thing on their menu is the chili, of course, but the best part is you can create your own. Pick your chili – beef, chicken, turkey, or vegetarian – your base, and add-ons for a 12 or 16 oz portion.

Can’t get enough? Buy a quart of chili to take home.

Chili. But especially their beef chili – it’s the original! 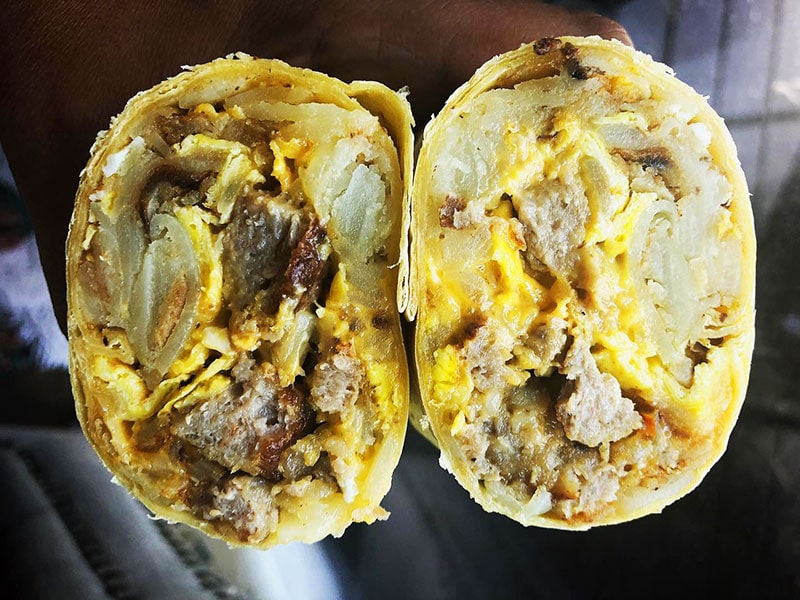 The letterboard menu inside offers a few more dishes that weren’t mentioned outside, but you get the gist. They also have taquitos hot dogs, grilled cheese, and onion rings.

It’s important to note that they stop serving breakfast burritos at 11am and, while their other food is good too, it seems silly to miss out on Corner Cottage’s main attraction.

A breakfast burrito with bacon. 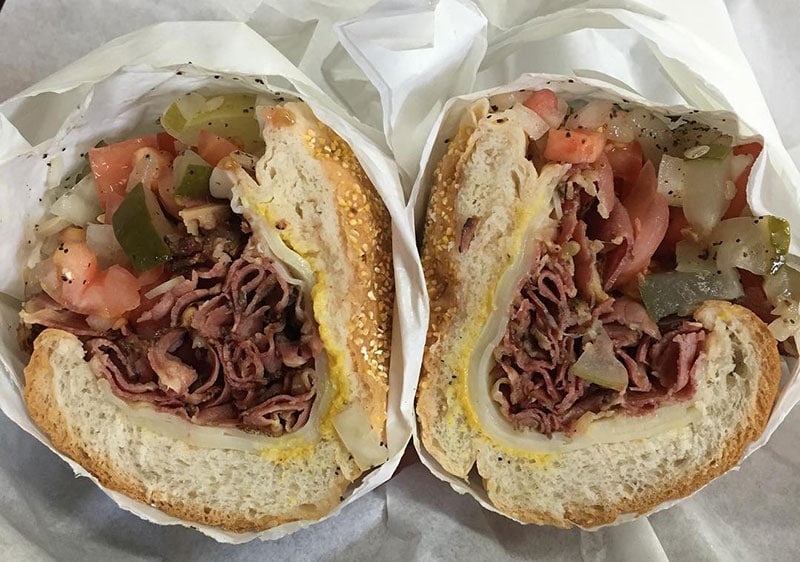 Another delicious Italian establishment, but with a completely different focus so don’t stress over which to choose – they all have their own unique offering’s!

Giamela’s specializes in sub sandwiches (but also serve pizza and pasta, of course). Like many others on this list they’ve been causing people to drool for decades, having first opened their doors in 1964.

Choose between cold or hot sandwiches, regular or large. You can request to have any of them toasted or with the bread scooped out.

If you prefer pasta, there are seven options served with a soup or a salad and garlic bread, including their bucket of spaghetti and meat sauce. 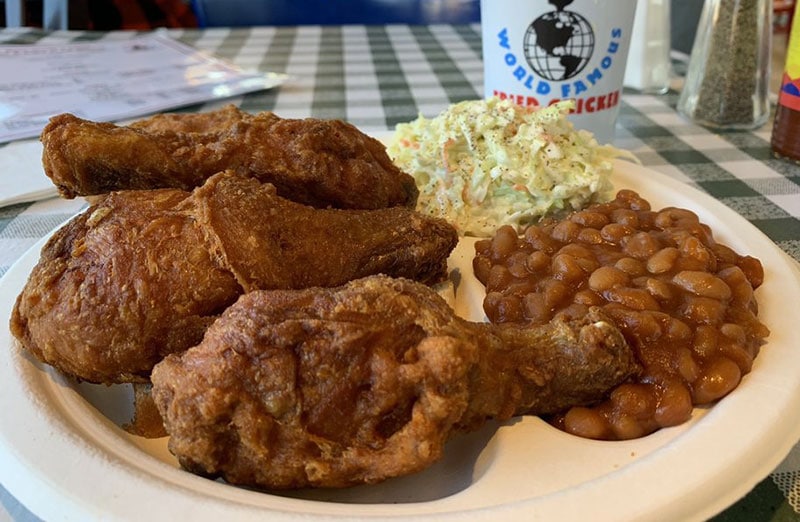 Born in Mason, Tennessee, Gus’s Fried Chicken dates back 60 years. It began as chicken sandwiches sold out the back door of a tavern until the founding couple built their own restaurant themselves in 1973. That location is still in operation.

The name came from the founders’ son, Gus, who took over the family business in 1984. Gus’s spread to California in the 21st century and saved diehard fans a lot of hassle, since they didn’t have to travel to Tennessee anymore.

\The menu is simple: choose from individual pieces or plates and pair them with a couple sides, like their famous sweet beans and slaw. 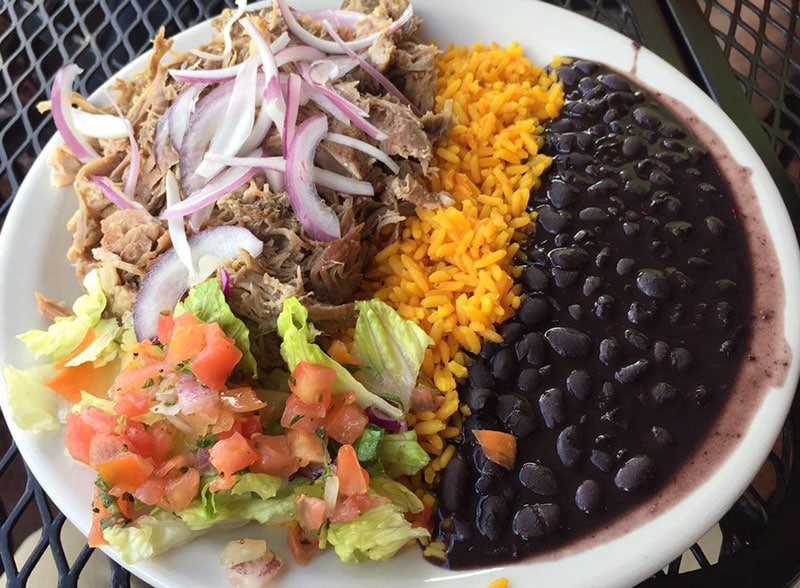 La Bamba is a casual restaurant that serves fresh island cuisine. Their flavor palate comes from the Caribbean, serving local specialities like a Cuban sandwich, fajitas, and Bistec Ala Venezolana.

Their burritos, tacos, salads, and dinner plates are meant to make you feel like you’re dining on vacation rather than on Glenoaks Boulevard.

Though, you may have a hard time forgetting that as inside is out and outside is in – the restaurant is more of a cabana than a dining room, offering al fresco dining year ‘round.

They don’t take reservations, but their island fare is worth the wait. 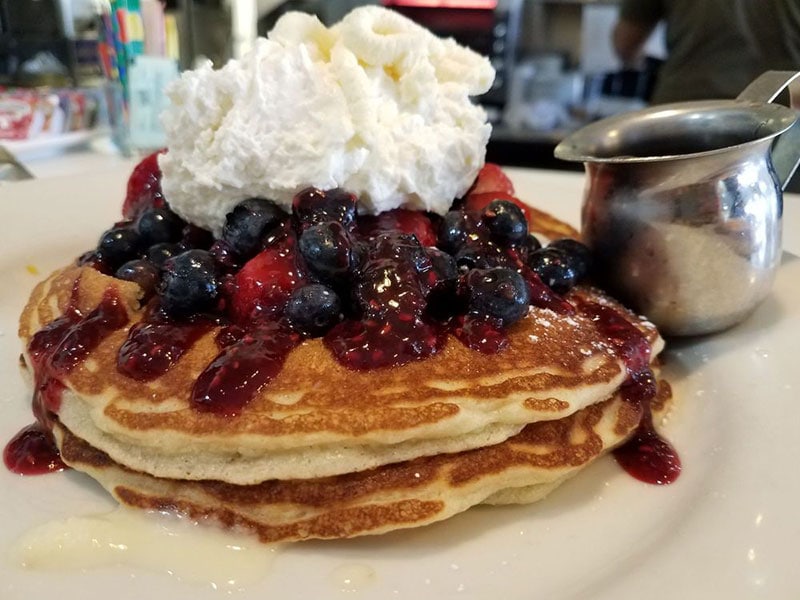 Burbank’s bound to be bursting with breakfast bars. And we’re adding Bea Bea’s to the list. Here, breakfast is everything (according to them)!

It’s a family-owned, casual breakfast spot that has focused on the American morning classics since 2008. Bea Bea’s serves breakfast and lunch all day long. Well, 8 to 3.

The restaurant is named after Chef Bea who specializes in French toast, offering 17 different variations on the dish including cornflake and coconut pineapple. 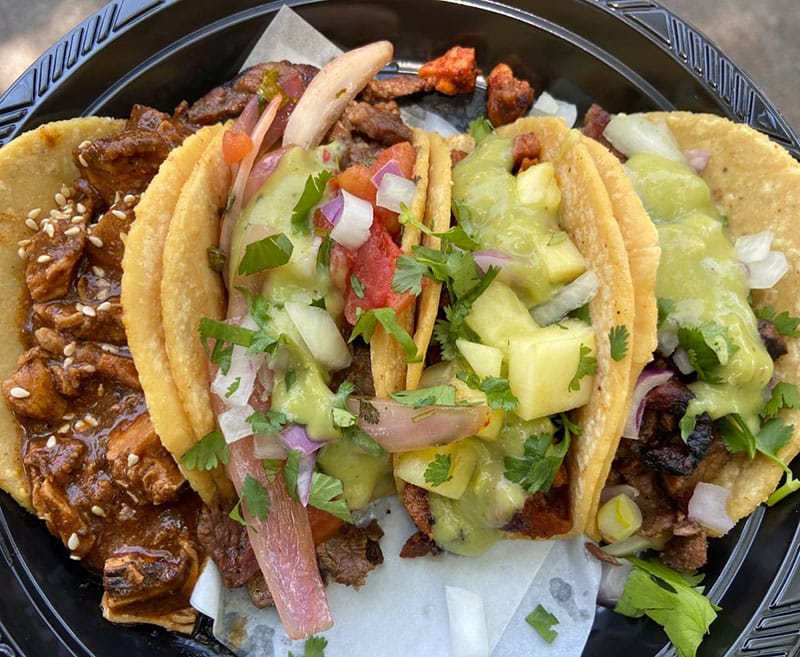 Pablito’s Tacos is the new kid on the block compared to the others. Opened in 2018, they’re an explosive blend of Mexican and Peruvian flavors.

The tortillas are homemade, the fillings cooked on a mesquite grill, and the guacamole is free. You heard us: FREE.

In the short time they’ve been open, Pablito’s has found such success that they’ve expanded to five different locations and been mentioned in top-5 lists for L.A. tacos.

They’re open every day of the week and have Taco Tuesdays and Taco Thursdays. They’re also in the breakfast game, serving breakfast burritos all day long. 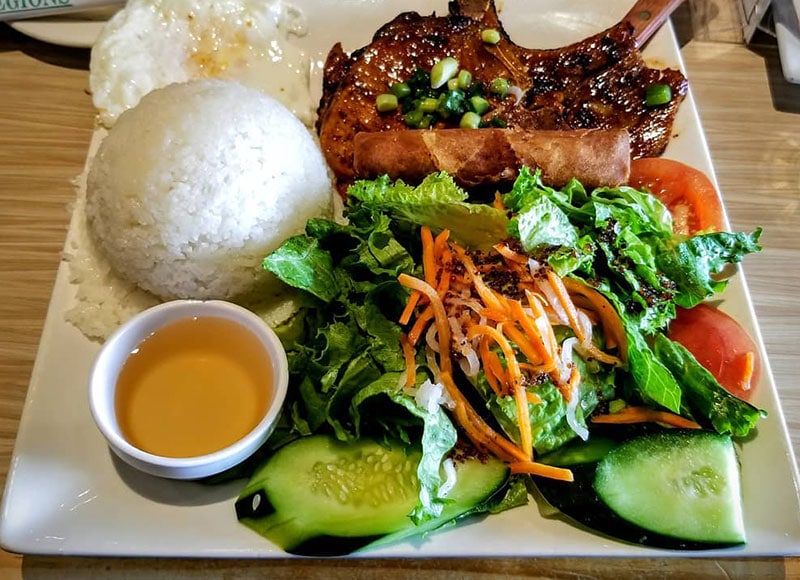 Mama Hong’s Vietnamese Kitchen finishes off the list thanks to its amazing traditional Vietnamese dishes. You can dine in or order take out. Either way, you’ll be coming back.

Let’s just start with the fact that they have their own sub-menu for spring rolls. There are six different fillings to choose from that you order in sets of two or four.

From there, they offer banh mi, pho, rice dishes, and vermicelli bowls. They even have vegan options. Pair your meal (or follow it up, like dessert) with a Vietnamese or Thai iced coffee.

Mama Hong’s is open every single day for lunch and dinner.

The spring rolls to start and Mama’s Pork Chop Combo.