Ever get tired of life in the big city? Want to run away and forget all your troubles, live life by your own rules? That’s not an impossible goal.

Slab City is a place to leave it all behind and indulge in the simply joy of life. You can visit, be a seasonal resident, or a lifelong believer in the freedom of Slab City. There are no rules – literally!

What is Slab City? 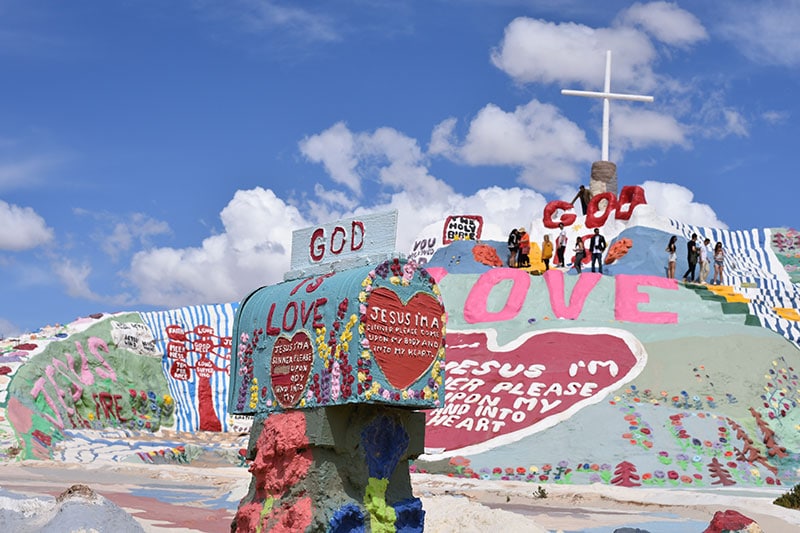 For lack of a better word, Slab City is an encampment. It’s a grassroots community out in a remote corner of the Sonoran Desert in California. Just east of Salton Sea, 30 miles south of Joshua Tree National Park and 40 miles north of the Mexican border, Slab City sits on 640 acres of land.

Slab City has been around for decades. Also referred to as “The Slabs,” this place is an unincorporated community, meaning that it’s not actually a city in its own right and doesn’t belong to any other city.

The Slabs found its way into being first in the 1950s by none other than the U.S. Marine Corp. Originally called Camp Dunlap, it was used as a military training facility starting in 1942.

It was also used a bombing range. When World War II ended, the camp was dismantled that December, officially closing March 1946. The land was then sold to the Navy, who held onto it for a full decade, in 1951. Ten years later, the land was sold back to the State of California who has technically owned it ever since.

Regardless of ownership, the land was unused and abandoned once the military shipped out. The only thing left were the giant swathes of concrete slabs the camp sat on (and which the military allegedly tested the effects of the harsh desert heat on).

It was then in the mid-1950s that people seeking a different way of life began to drift in. More and more people came – and even dogs, packs of whom roam free – and have called the Slabs home ever since. Even if they are officially squatters.

There’s a reason why Slab City is referred to as “the last free place.” It was formed by a community of transient people seeking freedom. While the State of California still owns the land itself, the squatter community set up in the Slabs infers that the collective is not owned by anyone. Arguably, it’s public land, and therefore for the people.

What is the population in Slab City?

The population of Slab City fluctuates. Its arguably permanent residents, those who stay through the summer, total 150. However, in the winter moths, that number multiplies. Those months there could be as many as a few thousand people inhabiting the Slabs.

The population makes up a wide range of people. Some with former prestigious banking careers; some who drifted from plumbing to restaurant work; some who struggled with homelessness in civilization; convicts; and addicts. In a word: transients. Many are retirees or over the age of retirement.

Is it really lawless?

“Lawless,” though in essence a factual adjective, tends to have a negative connotation, suggesting an unsavory place. While Slab City is technically lawless, it’s not bad.

It probably has a lower crime rate than most safe cities, with such a small, free-loving population. However, as the population spikes in the winter months, a negative lawlessness does establish itself more than Slab City’s more permanent residents would like.

The influx of seasonal residents who might not have the same commitment to Slab City as others inspires drug abuse, theft, and ever more trash. As one resident commented “Freedom isn’t always free.”

The price at which residents earn this freedom is by adhering to no government. There is no mayor of the Slabs and no laws governing its existence. Lawless. (But not always bad!)

Do police respond to Slab City?

Yes. In fact, there are regular police patrols in the Slabs.

Are there any rules in Slab City?

The ones that the residents give. Slab City is broken down into over a dozen neighborhoods. Each one of these neighborhoods has its own set of rules decided by its own residents, even its own culture.

For example, one neighborhood called California Ponderosa is overseen by Spyder, the de facto leader, who lives there with his wife and kids. He charges snowbirds a nominal monthly rent that allows them access to the outhouse and outdoor shower facility and two meals a day.

Another neighborhood called East Jesus’ 30 acres is actually private property and owned by a non-profit charity, the Chasterus Foundation. East Jesus boasts an outdoor art museum, offering a year-round attraction open to the public. Their private land and the residents on it are answerable to the charity.

Technically, there is one pretty solid rule: no naked bathing at the Mud Hot Springs! While there’s advice on how to pull of a sneaky dip in private, there had been complaints about natural bathing at the spring as those indulging were sighted by children on the school bus. Apparently the police made a habit of hanging around to ticket offenders, for the sake of the little ones. 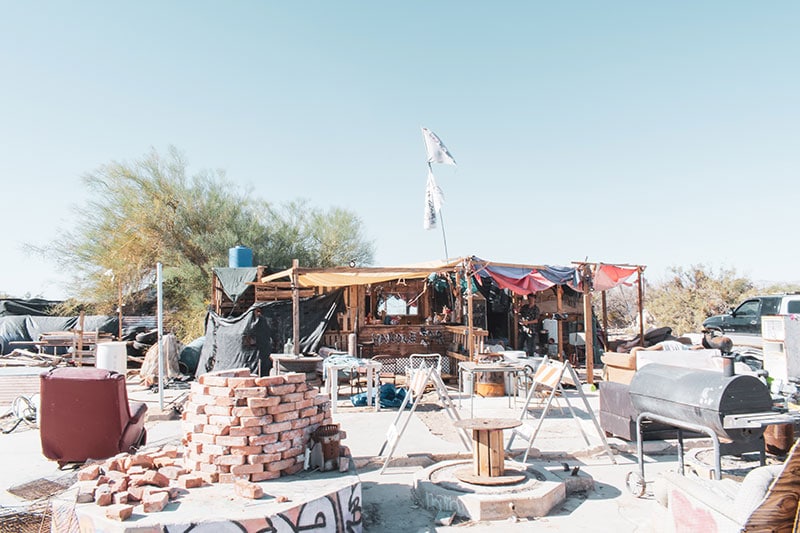 The Slabs is the epitome of living off the grid. The residents find homes in the forms of trailers, tents, broken down school buses, even primitive lean-tos … essentially whatever they can find to make their accommodation out of.

None of these homes have electricity like cities do. Slab City isn’t connected to the grid.  Each neighborhood has its own means of getting power, many having generators to keep things running.

They also don’t have water services, meaning their homes don’t have running water. In a place where the streets are dirt compacted down by the comings and goings of foot traffic, are you really that surprised? (To be fair to the Slabs’ residents, they have begun to name the streets).

Despite the fact that the community doesn’t benefit from state waste services, they’re quite strict on their garbage habits, breaking down their waste between burn, landfill, cans, glass, plastic, and scrap metal.

Trash is beginning to back up, though, and certain neighborhoods are working together to petition the city to organize a waste removal service so as to increase the standard of living for residents. Not all agree, however, and see such moves as an attempt to implement laws and gentrify the Slabs.

Happily, unlike other desert locations, cell service is spotty but more reliable than you’d think. Many residents and long-term visitors use cell boosters for more guaranteed service, but bars aren’t impossible in the Slabs.

Where do people go to the bathroom?

The Slabs is full of outhouses and composting toilets. Once you get used to doing your business in the great outdoors, you’ll be grateful that the winter temperatures don’t drop that cold!

How do people get food

Slab City residents rely on the closest towns for food. They simply go to the supermarkets there. The closest is Niland, four miles down the road, then Brawley, 22 miles and a 30 minute drive. Some residents do try to grow their own food, but it’s rarely enough to fully sustain their own household. The government does provide monthly food handouts and sometimes visiting pastors come with nourishment.

What do people do in Slab City? 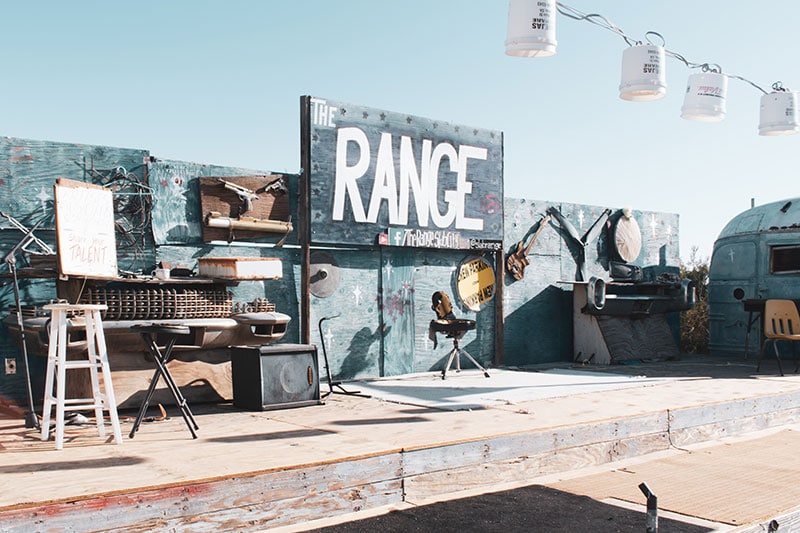 There is a library, skate park, and a trading post, among other sites of interest. A couple places sell food and there are even AirBnB rentals. The more committed Slab City residents tend to have a certain trade under their belt to help or sell to others, such as welding, fixing cars, and baking. Musicians play for gas money to keep the generators running.

Some may see the Slabs as a living art museum. The amount of effort its residents put into creating their homes as well as murals and sculptures is astounding.

Bright colors bedeck rocks, abandoned buses, abandoned military sentry boxes, and lean-tos. The large Salvation Mountain stands near the entrance to Slab City, drawing loads of tourists wanting to capture the site on camera, but who don’t usually venture further into the city itself.

As it’s in the desert, there should be no surprise that the summer months in Slab City can experience extreme conditions. The temperatures can spike as high as 120ºF – and that isn’t a rare occurrence. In the winter, temperatures rarely drop below 40º. 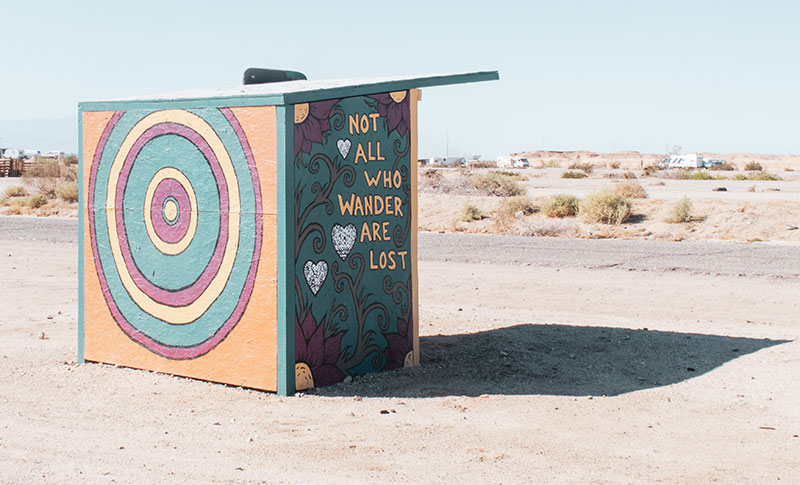 Living off the grid isn’t a novel concept. There are close to 200,000 American families that live off the grid. This could be for environmental, personal, or communal reasons.

In Oregon, Breitenbush is a permanent community set on hot spring beds who live on this Detroit site and run the Breitenbush Hot Springs Retreat and Conference Center.