Today, one great industry that’s flourishing in Las Vegas is the brewing trade. In the past decade alone, tens of new breweries have popped up across town.

Here are the best breweries that Las Vegas has to offer: 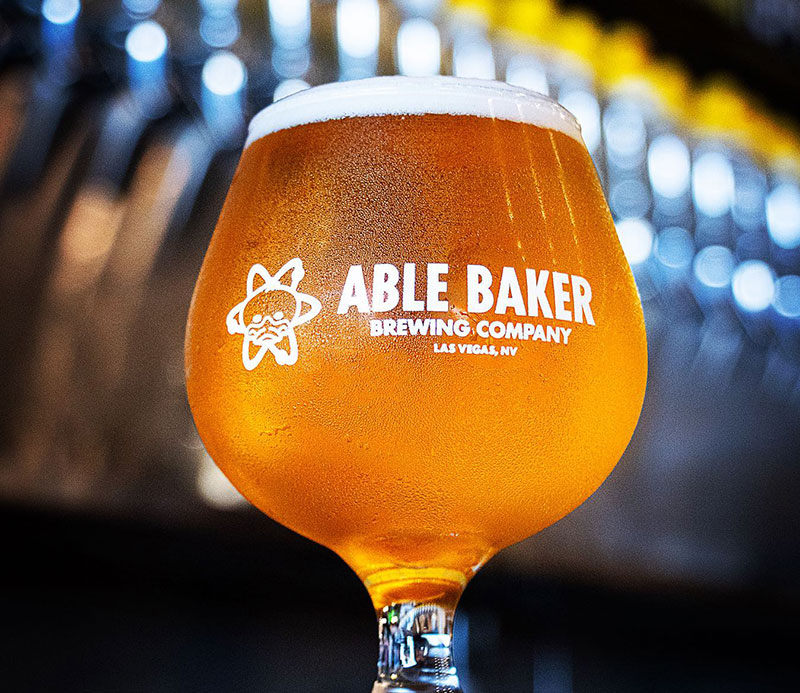 Inspired by the Atomic Age, Able Baker’s whole concept comes from Nevada’s history of scientific testing and discovery: the first two atomic bombs detonated at the test site in Nevada were called Able and Baker, following the military phonetic alphabet.

They run their own experiments, brewing almost every style of beer imaginable. Able Baker has won awards at the World Beer Cup and offers an exclusive, members-only yearly club.

Their brewery and taproom are located in the Arts District of Las Vegas. The bar offers 30 draft beers, including some guest taps, as well as wine and spirits.

You can choose between a 6oz or 12oz pour for most beers. Arts District Kitchen is also the brewery’s very own, in-house cookery. They serve up dishes made from scratch, from burgers and sandwiches to tacos and salads. 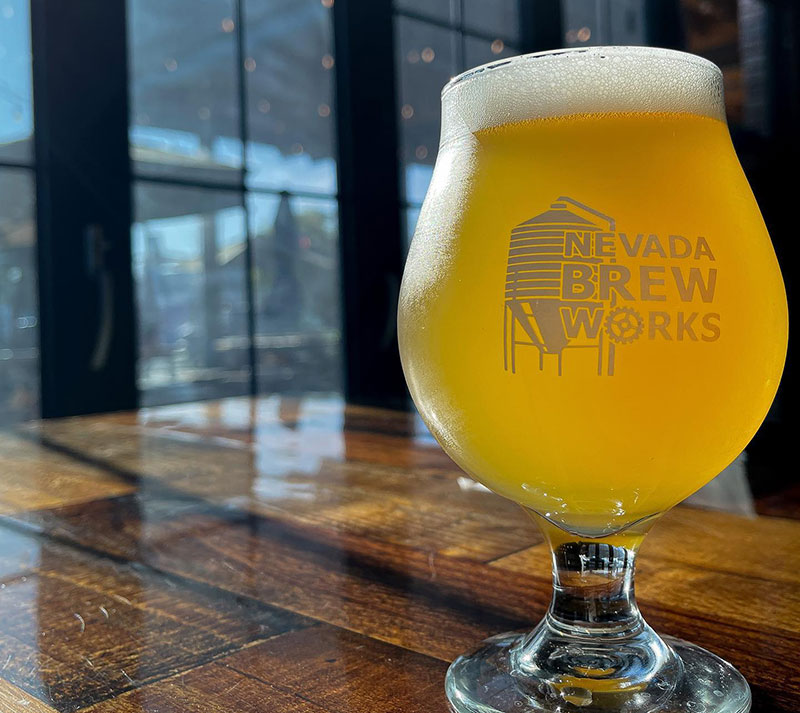 Operating on a very small scale, Nevada Brew Works is a brewpub just down the road from Able Baker. Their size doesn’t mean they sacrifice on quality, though.

Their brewers have been trained at the Siebel Institute of Technology to guarantee the best brews. Their brew line-up reads as classic American, with IPAs and lagers predominating their menu. They do offer a schwartzbier, too, though.

As the Brew Works is more bar than brewery, you get a traditional pub experience. Alongside their house brews on draft, they offer a curated cocktail menu of 10 of their own creations, all with witty celebrity-inspired names.

They also have an impressive whiskey collection that is also offered as bourbon flights.

You can line your stomach with some of their pub grub. They serve personal-sized pizzas, burgers, and salads. Imagine finding your new favorite local and learning they brew their own beers! 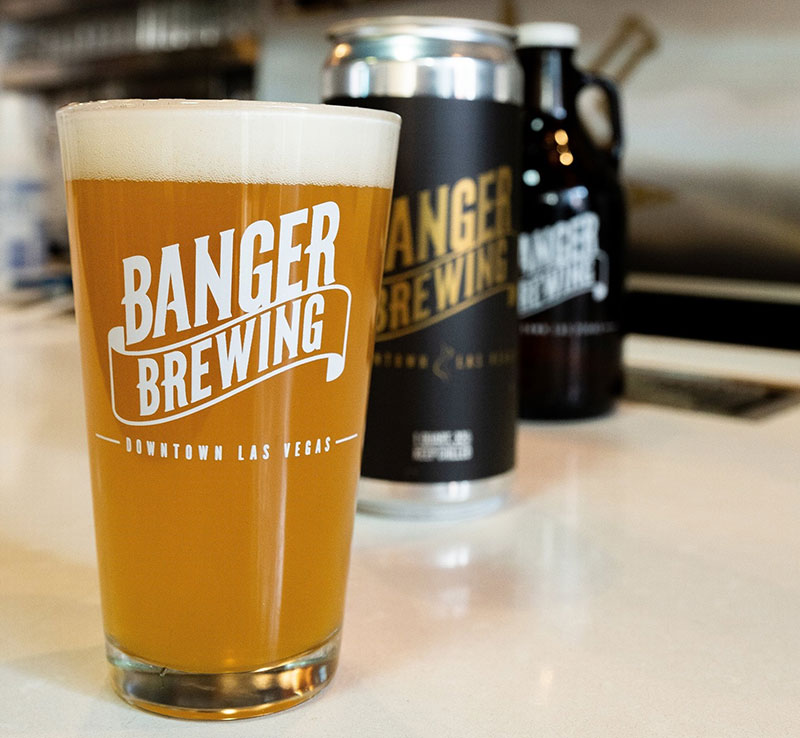 Banger Brewing seeks to reflect Vegas in their work by being sexy, classy, and one of a kind. What started among a team of Bellagio employees became an undertaking to produce great, local beer.

The group of founders moved from the casino kitchen to their own to start producing small batches of beer. In the heart of Downtown, they now have a full commercial brewery and taproom to visit.

Sip on a Banger while snooping on their fully-functioning brewery. Behind their barrel-aged beers, a glass window lets you look out onto the brew deck from the bar and see the very place the drink in your cup was made.

Outside, you can spot the brewery thanks to the big, branded conical fermentation tank. Order from close to 20 taps, or go for a flight if you can’t make up your mind. 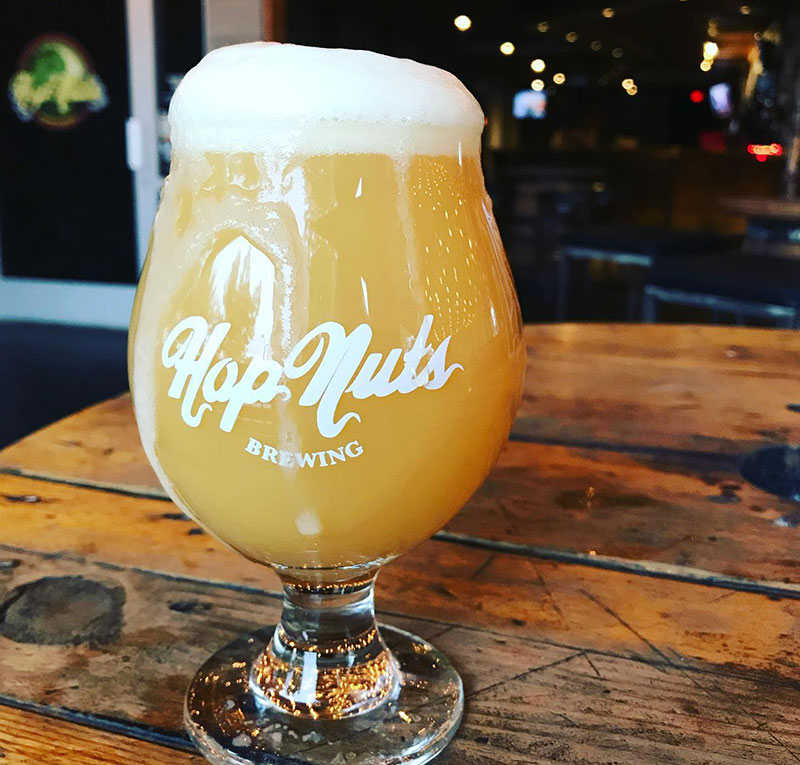 While the Arts District is now full of delicious, local craft brews, Hop Nuts Brewing has the claim to fame of being the first premium craft microbrewery in the neighborhood.

Presumably, their name comes from their addiction to hops: a love so strong it’s clear in their beers. DIPAs, IPAs, and Pale Ales dominate their menu, but they also offer lighter options like a Helles, though that’s only on their seasonal line-up. Otherwise you can always drink their core range of 8 beers.

The Hop Nuts taproom started in the Arts District, as we mentioned, and is still home to their production brewhouse.

They are also soon to open a second location in Tivoli Village in Summerlin, September 2022.

Both bars will be open 7 days a week and pouring from 20 taps – 15 of their own draft and 5 guest beers. They don’t serve any food at the bar, nor children (it’s state law!). 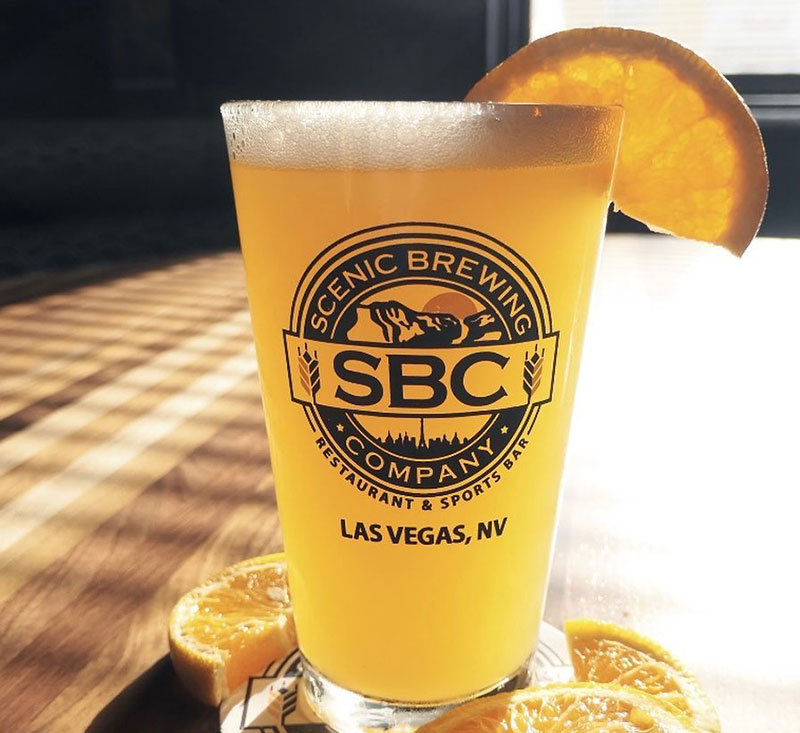 Over in the Spring Valley area of Las Vegas, it’s a brewery set up for locals more than tourists.

The taproom at Scenic Brewing is everything sports bar. They serve beer from 17 taps, five of which are always SBC’s own in-house brews.

You can sip a beer flight while watching the game on their massive TV screens. The global food comes into play for both lunch and dinner – even Sunday brunch.

They also host events at the taproom, like live music, karaoke nights, and beer pairing dinners. 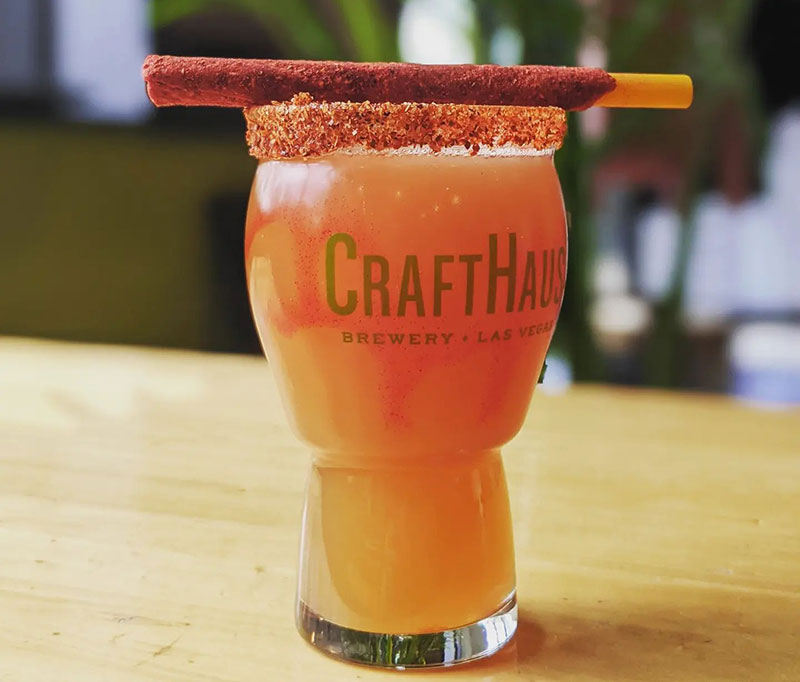 Since 2014, CraftHaus has been pouring their hearts into every pint they brew. Inspired by a friendly trip around Europe, co-owners and couple Wyndee and Dave decided to commit themselves to the craft beer community and work to support Nevada independent brewers, so much so that they helped changed licensing in favor of craft breweries in Las Vegas.

The CraftHaus location in Las Vegas is their second taproom. The actual brewery and original tap are housed in Henderson, NV. CHAD, as the second taproom is called (it’s CraftHaus in the Arts District – get it?), has 1800 sq ft of good times in a really chic, art-inspired space. It doesn’t look like your usual taproom, giving the craft beer experience a bit of an up-market, chic Las Vegas flair. The taproom serves 24 beers on draft and has light bites inspired by Europe, like pretzel rolls, charcuterie boards, and European sausage. 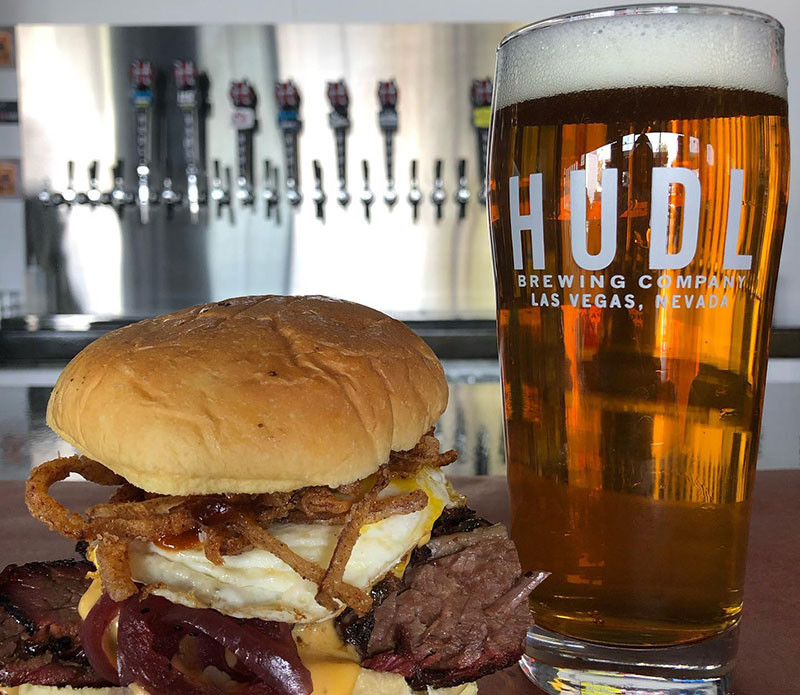 While their brews span many different styles, they seem to have an obsession with the cream ale – ⅓ of their beers on tap are cream ales! They must be good, though, with the number of GABF medals their head brewer has under his belt …

The HUDL brewery and taproom are located in the Arts District, along with most of the other craft breweries in town.

They offer 18 of their beers on draft, plus three guests. You can pop down the brewery for a casual drink or get involved with music bingo or trivia nights.

Their sleek industrial space looks out onto the brew deck, the chrome-top bar and echo of their shiny fermentation tanks in the background. Unfortunately, there’s no food at the taproom. 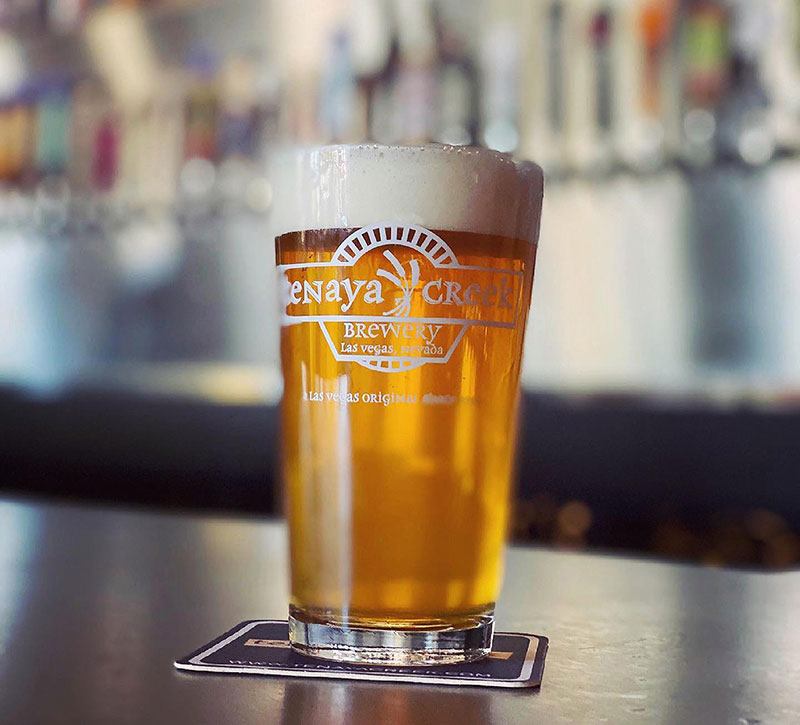 The oldest on the list, Tenaya Creek Brewery first opened in 1999 as a restaurant and brewery. In 2008, they left the cooking to the pros and dropped the restaurant from the business, focusing solely on beer production.

Since then, they’ve had to move locations thanks to their ever-expanding business. They’ve won state-wide and national awards for their beer and even took a silver medal in the Australian International Beer Awards in 2013.

Because Tenaya Creek dropped their kitchen, they now invite food trucks to the brewery.

Every single night of the week you can fill up on a wide range of cuisines from local, mouth-watering caterers between 5 and 9 pm.

Want to know what’s currently on tap? They have a live cam set up on their tap list so you can stay up-to-date by the second. They also offer 12 different guest beers on draft. 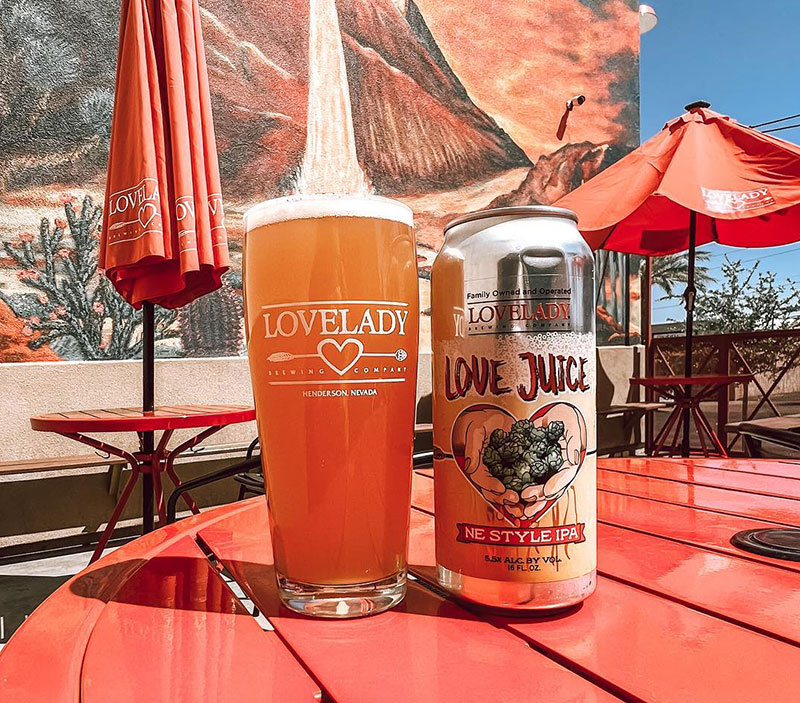 A family affair, the Lovelady Brewing Company bears the family name. Founded by four brothers, their foray into beer making dates back decades when two of the brothers first made homebrew at a mere 17 years old.

We’ll skip the legality of that consumption and go straight to the founding of the brewery that aims to go back to the community – of Henderson, that is. Both locations are in this Las Vegas suburb.

The original taproom and brewery looks like a mid-century cinema (or even a quick place to get hitched, seeing as it’s Vegas). Inside is an open-concept, bierhall bar.

They also have a large patio with a mural done by a local artist. Neither location serves food, but is nearby some really great local restaurants.