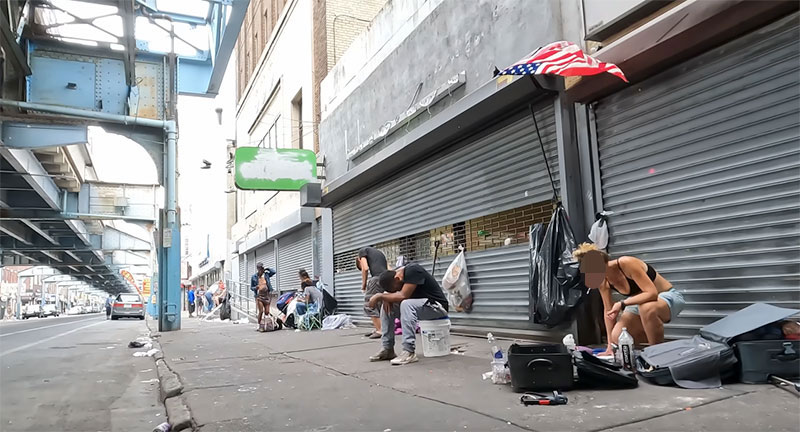 Close to the I-95, and a stone’s throw away from the scenic Delaware river, Kensington is a neighborhood in northern Philly with quite the reputation. While the moniker “Killadelphia” implies gangland warfare, Kensington is plagued by another culprit: the drug trade.

What is Kensington Avenue?

Called the “largest open-air narcotics market … on the East Coast,” Kensington Avenue has, without a doubt, made a name for itself. It’s so well known that a simple Google search for “really bad drug areas” brings it up. The avenue runs on a north/south slant and unofficially includes the neighborhoods of Kensington, East and West Kensington, Fairhill, Port Richmond, and Olde Richmond.

What is the most prominent drug that’s being used in Kensington?

Crack, meth, heroin, oxycodone, weed, percocet, PCP … these are all the usual suspects around Kensington Ave. However, heroin and fentanyl is without a doubt the most popular drugs. At first fentanyl was used as a cutting agent to lets dealers “water down” their heroin with a cheaper alternative to make more money. However, fentanyl has replaced heroin completely and it is rare that you find anyone using pure heroin in Kensington.

Fentanyl has devastating withdrawal effects, though. Worse than plain heroin.

More recently fentanyl is being replaced with an animal tranquilizer called Xylazine or ‘Tranq’. The drug is even cheaper to produce and procure than fentanyl and is more dangerous in the sense that Narcan is not effective against overdoses.

History and Decline of Kensington

Kensington was originally a blue collar neighborhood that thrived on the factories built there. Its mid-century decline due to deindustrialization paralyzed Kensington. The white residents fled to the suburbs and people of color and limited means moved in.

From there, drug dens sprung up across the neighborhood and allowed for gangs to breed in the area. However, the drug market remained decentralized, running through small groups of dealers that were harder to prosecute than, say, a crime syndicate. This has made it hard for police to quell the trade.

What caused Kensington Ave to be in its current condition?

Today, the neighborhood is full of decrepit two-story rowhouses and many abandoned commercial spaces: defunct factories and vacant lots. It is known for pawn shops and check-cashing joints. The few other businesses – Chinese take outs and Irish pubs – have missing persons signs hung in the windows.

The influx of immigrants and low-income households – many of whom were unaware of the drug situation, or were forced to ignore it due to the stark affordability – has made little difference in gentrifying the area.

History set Kensington up for a steady decline. Once it hit rock bottom, the need for an outlet brought more people in. Many now-users originally sought out street drugs due to injuries or post-surgery pains and couldn’t afford the legal medicines to soothe their pain. Then they, like Kensginton, began to decline further.

How many homeless people are there in Kensington? 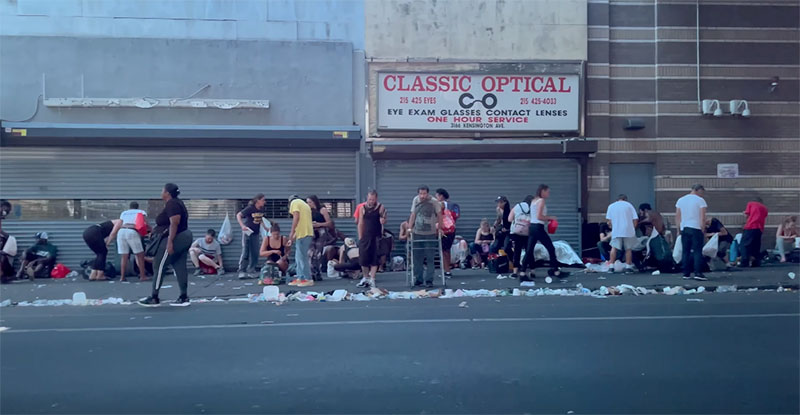 Almost half of the neighborhood’s residents live below the poverty line. Many of these residents don’t have homes. Compared to the infamous Skid Row in Los Angeles, Kensington’s homeless problem doesn’t seem as bad. Estimates vary between 300 and 650 people living on the street.

There was a homeless camp set up in a railroad gulch in Kensington called El Campamento. Dozens upon dozens of people lived there. Many died there. In 2017, the city cleared it out in an attempt to begin to tackle the cyclic issue of homelessness and drug use.

The camp was cleared, the people chose new spots in the neighborhood to overrun with used needles, overdoses, and trash. They eventually set up a new encampment under another railway bridge nearby. That camp was cleared, and another formed.

Not everyone who takes advantage of the trade on Kensington Ave lives nearby, though. There’s a significant number of people who commute to this space to pick up what they need, making the residual effects of the narcotic empire spread far and wide.

How bad is Kensington Ave?

Dealers stand out in the open, hawking their wares. Some even offer free samples. Drug activity is not hidden here, especially not when heroin can go for as cheap as $5 a bag. Users flock to the scene.

Kensington was featured in Nat Geo’s 2013 docu-series, “Drugs Inc.” in the episode about Philadelphia. Nine years later and we’re still talking about it.

A quick search brings up a plethora of articles outlining the ongoing issues Kensington faces, the overdose rates and weekly deaths. It’s a place where many admit they don’t want to be, but can’t get away from. The drugs are just too cheap and too accessible. The help is there, but it’s not enough.

Is Kensington dangerous? Is it safe to visit during the day? At night? 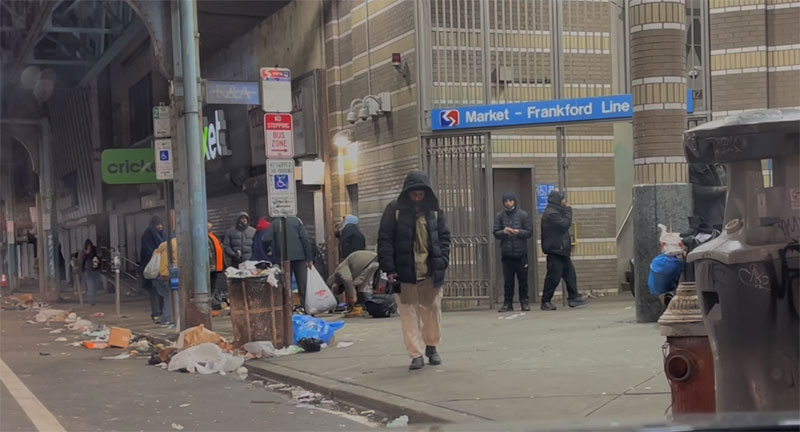 Along with its teeming trade in illicit materials, Kensington is also a highly dangerous neighborhood. It has one of the largest rates of shootings in the city and is the scene of many murders. The conflict between clean residents and dealers can escalate, sometimes so high that a person once threw a Molotov cocktail through a resident’s window. These territorial disputes happen in clear daylight, there’s no concern for the repercussions. Suffice to say it is not a place to go at night.

Is it safe to drive through Kensington?

Some residents of Kensington won’t go out without driving, not wanting to walk through the neighborhood despite living there. Parents will walk their children to the bus stop, even if it can be seen from their front door, and wait there with them until the bus comes.

Why does the city of Philadelphia let Kensington exist? Why don’t they clean it up?

There have been many petitions by residents to take care of Kensington. Despite lobbying council members and state representatives, no change has been made.

The drug market is so strong in Kensington and the joblessness and institutionalized racism so engrained, the community struggles while the state flounders with resolutions.

The government has shown attempts at trying. They declared a statewide disaster over the drug epidemic in 2017. They have attempted to clean up the neighborhoods, planting trees and replacing broken street lights.

They tried to institute safe-injection sites, where users can shoot up without fear of prosecution. These sites have proven to avoid overdoses and connect users to long-term help. Despite research on the positive effects of these sites, the Trump administration blocked them from being established. 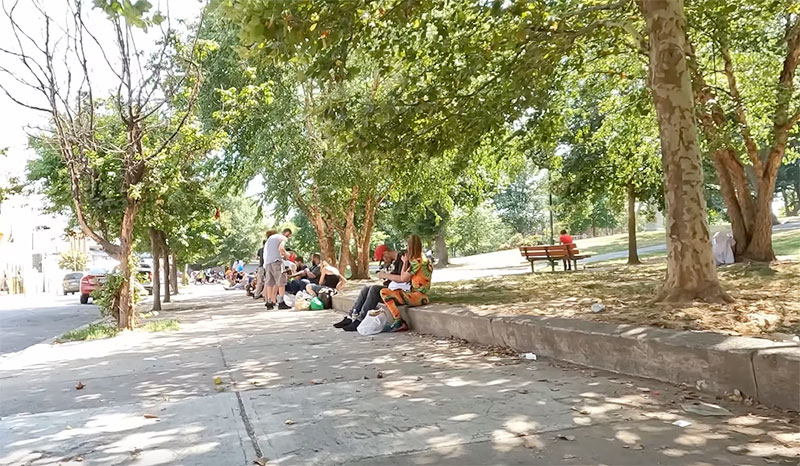 McPherson Square is the heart of Kensington. It’s central to the neighborhood and offers an ideal place to shoot up and camp out. Upwards of 100 people camp out there every night and it’s not for stargazing. The square is home to the neighborhood’s library, many of whose bookkeepers regularly run out with Narcan to help prevent overdoses.