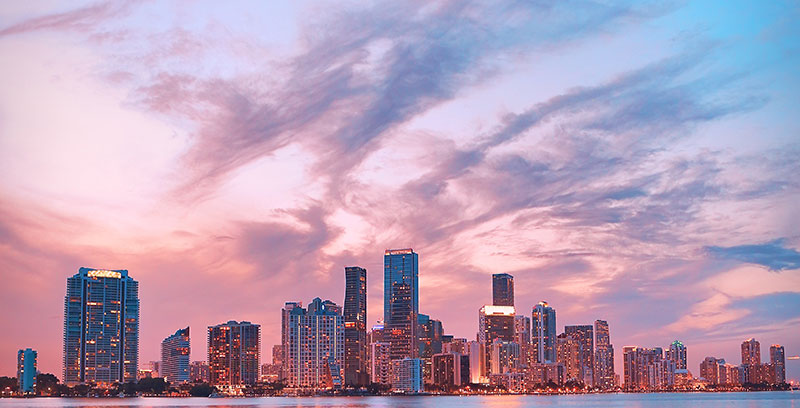 Viewing the northern lights is one of the most delectable and unforgettable experiences you can have in your entire life. We are lucky to live on a planet that works together with the sun to produce such a spectacular natural occurrence.

But what if you don’t live up north?

Every once in a while, a solar storm is strong enough that you can view the northern lights even in a southern state like Florida.

If you’re fortunate enough, you’ll be able to view the northern lights from your tropical paradise!

Can you see the northern lights in Florida?

The sun is always creating solar wind by ejecting charged particles from its corona. When the solar wind penetrates the earth’s magnetic field and hits the upper atmosphere, the northern lights are brought to life.

In order to see the northern lights in Florida, the solar wind must be incredibly strong and the lights must be viewed from a place with little to no light pollution.

Have the northern lights ever been visible in Florida?

Florida’s most drastic display of northern lights in modern times was reported in Jacksonville on March 13, 1989. The lights were visible for about 1 ½ hours around 8pm.

Mike Reynolds, a past planetarium director at the Museum of Science and History, photographed the red lights and said “It was very very rare.”

How often do the northern lights appear in Florida?

According to Rodney Viereck, an employee at the National Oceanic and Atmospheric Administration, the sun has an 11-year cycle. This includes 3-4 years of solar maximum, a time when the most particles are shot out from the sun. The next solar maximum is expected in 2025.

Following the prior trend of the northern lights being seen 50 years apart in Florida, we can estimate that the next viewing will be around 2030. However, that is only based on two points of data and would require extremely specific conditions.

What kind of conditions make it possible to see the northern lights in Florida?

In order to see the northern lights in Florida, there needs to be an incredibly strong solar wind that can break through the thick magnetic field above the state.

There also needs to be minimal light pollution to avoid obstruction of the view.

Why aren’t the northern lights as visible in Florida as other places like Alaska?

Northern lights are seen the most strongly around the earth’s poles. This is due to how the earth’s magnetic field works.

What is the KP-index and how does that relate to seeing the northern lights in Florida? 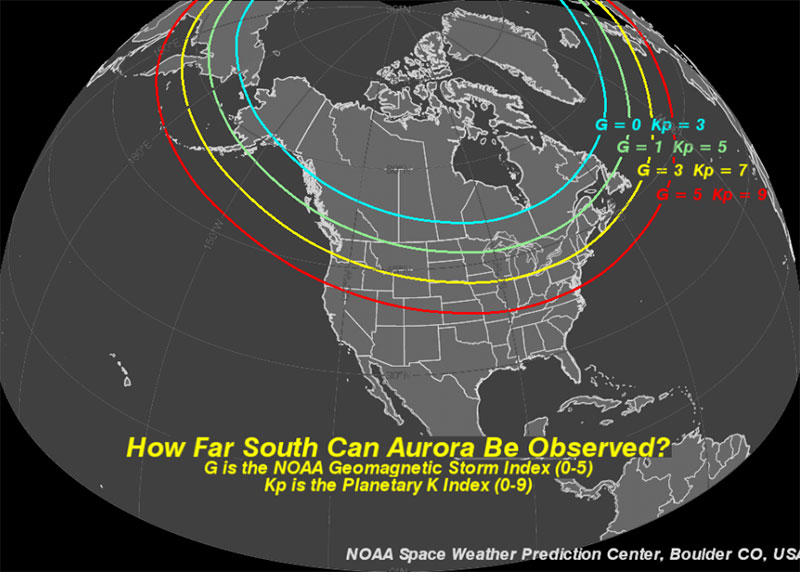 The KP-index is a number between 0 and 9 that measures the geometric activity for a 3-hour period.

Because Florida has a stronger magnetic field since it is closer to the equator, a higher KP-index is required to see the northern lights.

But even in northern states like Oregon and Washington, the higher the KP-index, the more likely you are to see northern lights.

The 8 Best Places To See The Northern Lights In Florida 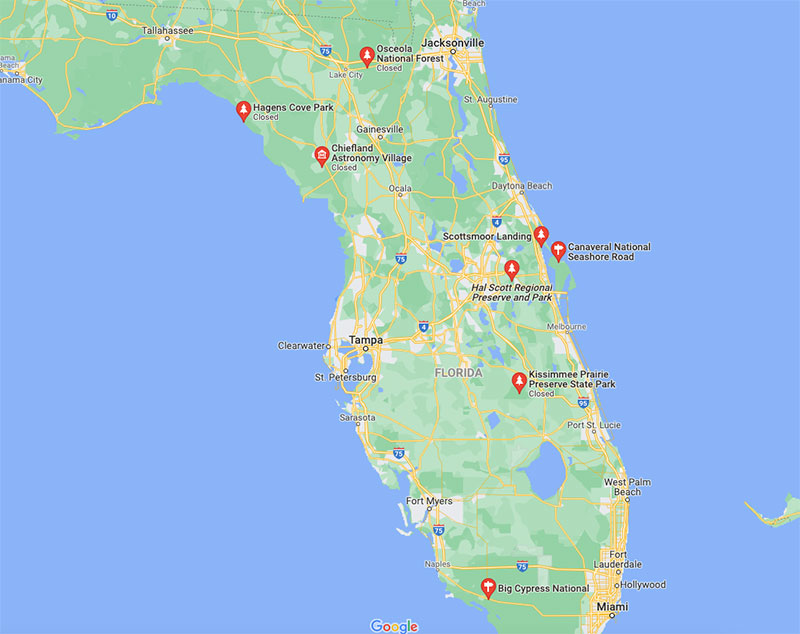 It is most famously known for its lack of light pollution and campers can see the Milky Way without binoculars or telescopes.

Between its lack of light pollution and expansive sky, Kissimmee Prairie Preserve creates the perfect conditions for northern light spotting.

The Chiefland Astronomy Village can be joined by any astronomy enthusiast.

Perks include permanent observatories on site, electric and water hookups for RV’s, imaging workshops, and a great opportunity to learn from other astronomers.

Joining the Chiefland Astronomy Village will give you some new astronomy skills and help guide your search for the northern lights.

This 729,000 acre swamp is a designated International Dark Sky Place. Outdoor lighting is only provided where necessary.

In addition, staff from the preserve work with local astronomy groups to create educational opportunities such as their Night Sky Programs.

Located southeast of Orlando, you won’t be bored at the Hal Scott Regional Preserve and Park.

Its recreational activities include trails for hiking, horseback riding, and biking, wildlife viewing, camping, and geocaching.

You’ll be surrounded by luscious flora and fauna while camping out to stargaze at this incredible preserve and park.

This 200,000 acre forest is located about 50 miles west of Jacksonville, where the last two northern light sightings in Florida took place. That’s a good sign!

There are 67 campsites available for motor homes, trailers, or tents at this forest’s Ocean Pond Campground. The campground has many activities to keep you busy such as water skiing, boating, and fishing.

Located in northern Florida, the magnetic field is a bit weaker than it is in southern Florida which provides a better chance of spotting the northern lights. And where better to see the colorful spectacle than in a National Forest?

For all the astronomy nerds out there, it is a great location to witness a launch from the Kennedy Space Center.

Located in northern Florida, this park provides sweeping views of the Gulf of Mexico and the pine islands.

You can even climb up an observation tower to get the full effect of this panoramic recreation area.

Its northern location and expansive skies give you a good chance of catching a glimpse of the northern lights under the right conditions.

The Canaveral National Seashore is the longest stretch of undeveloped Atlantic coastline in Florida.

There is even back country island camping for those who want a more primal and undisturbed camping experience.

This coastline is bound to have extremely minimal light pollution due to its preservation.

Tips to see the northern lights in Florida

Here are some tried-and-true tips for northern light seekers.

Although conditions have to line up perfectly, it is possible to see the northern lights in Florida.

They were seen twice in the 20th century, alluding to a good chance that we may have that luck again sometime soon.

There are many beautiful locations around the state that make for impeccable viewing destinations.

Don’t lose hope! History has proven that anything is possible.