The Northern Lights are a spectacle of luminous colors dancing in the night sky. They are Mother Nature’s greatest show and something that everyone needs to see once in their life.

Although all the pictures you see of the Northern Lights are in the northern reaches of places like Norway, Canada, Iceland and Alaska, you’ll be surprised to learn that once in a rare blue moon, you can actually see the Northern Lights light up the sky over Georgia.

Can You See the Northern Lights in Georgia? 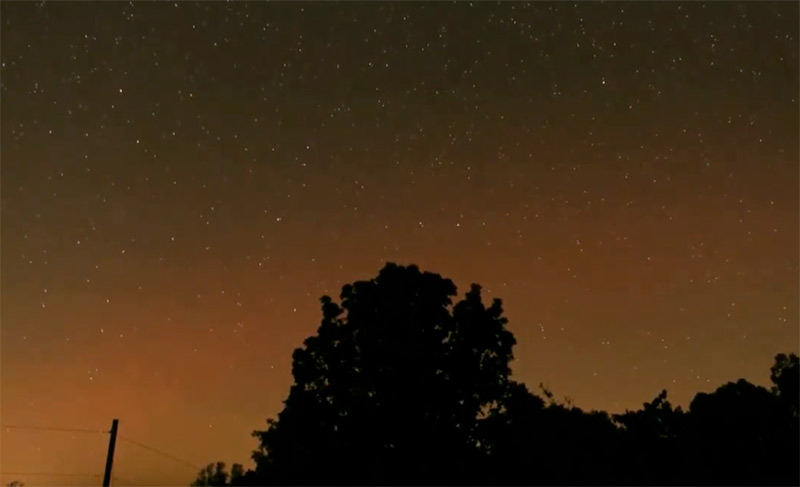 The northern lights rarely show up in Georgia. The conditions that need to met to make it visible in Georgia are so rare that the Northern Lights may only be visible once every few decades.

The locations around magnetic north are the best viewing locations for the Northern Lights. This includes Alaska, Canada, Iceland, Finland, and Norway, Finland.

For example, if you live in Alaska you might be able to see the lights a few times a week. In the northeast parts of the United States like Maine, Wisconsin, Michigan and Minnesota and North Dakota, you might see them a couple of times a year.

And If you’re located somewhere like south like Utah, Georgia or Texas, the Northern Lights may only appear in your night sky once every few decades.

Have the Northern Lights Ever Been Visible in Georgia?

Although incredibly rare, the Northern Lights have been visible in Georgia, twice in the last 20 years.

In 2011, a coronal mass ejection (CMEs), or massive burst of solar energy,
hit Earth and sparked an intense geomagnetic storm that allowed more than half of the United States to view the Northern Lights, including Georgia and other southern states.

One Georgia resident described seeing the Northern Lights as a "broad blue and green spiked band that was tinged with brilliant red areas."

The Northern Lights were also visible in 2001 when a unusually large solar flare hit the Earth’s atmosphere. One witness described the scene, ‘There was this huge red streak through the northern sky, almost like a fluorescent red, it looked like rays coming from the ground up into the sky."

What Kind of Conditions Make it Possible to See the Northern Lights in Georgia?

A large solar flare, with clear skies and dry air and far away from light polluted cities are the ideal conditions for seeing the Northern Lights in Georgia.

Can you see the Northern Lights from Atlanta?

With the amount of light pollution emanating from the city of Atlanta, it is incredibly difficult, if not impossible to see the Northern Lights in Atlanta.

Light pollution makes the auroras more difficult to see and can break them up entirely. The light emanating from buildings and cars causes all atmospheric light to scatter.

The Northern Lights generally cannot be seen in cities unless they are exceptionally strong. Even where the auroras are visibly the strongest, cities such as Fairbanks and Tromsø, light pollution in these locations makes the aurora visibly weaker and can also shut them out completely.

Should a huge solar flare hit the Earth’s atmosphere during a complete blackout of Atlanta, one might be able to see the Northern Lights in the city.

How Far South Have The Northern Lights Been Visible?

In 1859, during the largest geomagnetic storm ever recorded in history, the Northern Lights were visible as far south as El Salvador!

How Far North of Georgia Do You Have to Travel to See the Northern Lights?

If you don’t want to wait for that rare and perfect mix of conditions to see the Northern Lights in Georgia, you could always take a road trip north to get a better chance of seeing the luminous spectacle in the sky. Here are a few places we recommend:

The Dark Sky Park is a prime location for seeing the Northern Lights. Some people claim it is the best location in all of Michigan and it absolutely the perfect destination for some of the best stargazing in the nation.

Located in the Northernmost region Minnesota, Voyagers is a an amazing and magical place of peace and wonder. There is virtually no light pollution in and around Voyageurs National Park, which makes it the perfect viewing spot for the aurora.

Beaver Pond Overlook, The Voyageurs Forest Overlook, and the Kettle Falls Dam area are all popular viewing locations for the Northern Lights in the park.

The Apostle Islands are a collection of 21 islands in Lake Superior, located in Northern Wisconsin. There is virtually no light pollution around the area and camping is available on 18 of the 22 islands. You can setup camp, enjoy the pristine water and stargaze the entire night away and possibly catch the aurora as it streaks across the night sky.

Tips For Seeing The Northern Lights In Georgia

Your best chances of seeing the Northern Lights in the United States will be to drive up north, far away from the city lights, where the light pollution is low and on a day when there is ample solar activity.