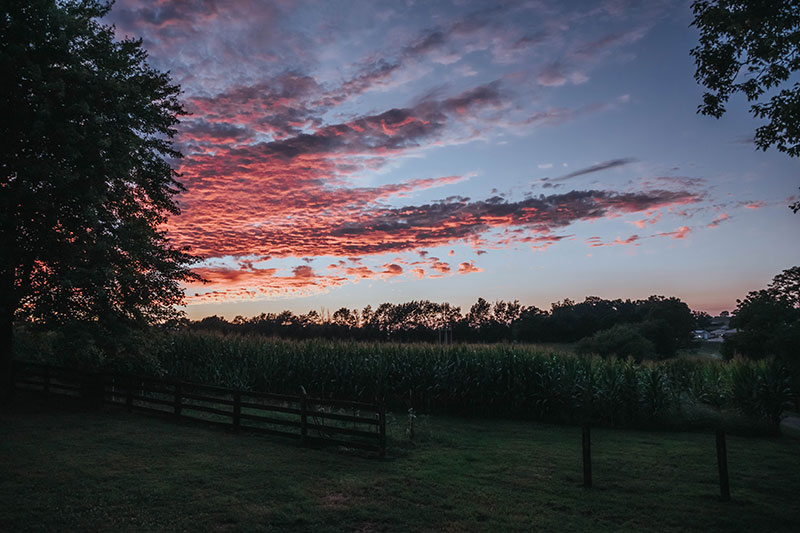 The Northern Lights, also known as the Aurora Borealis, are an atmospheric phenomenon that has entranced people for centuries.

One of the earliest records of the phenomena is a cave painting in France, estimated to be 30,000 years old. The lights are also mentioned in many historical sources from civilizations around the world, from China to North America.

They are a spectacle that everyone needs to see once in their life, but do you have to travel to places like Alaska or Norway to experience them? Or can you actually see them as far south as Kentucky?

Can you see the northern lights in Kentucky?

It is rare to see the Northern Lights in Kentucky as they typically occur further north and close to the poles. However, under the right conditions, there is a slight possibility that stargazers can see them in Kentucky.

Has the northern lights ever been visible in Kentucky?

Yes, the Northern Lights have reportedly been viewed twice in Kentucky in recent history, and sometimes before then.

Most recently in 2011, when people reported seeing “strange and beautiful” lights in the sky.

What kind of conditions make it possible to see the northern lights in Kentucky?

Strong solar winds make it possible to see the Northern Lights in Kentucky because strong winds have more energized particles.

Additionally, if a solar storm shifts the light towards the south, the Northern Lights can be viewed in Kentucky (as observed in December 2020).

Kristian Birkeland (1867-1971) A Norwegian scientist first proposed that the Northern Lig hts were created when the sun emitted energized particles that hit the earth’s magnetic field.

When these energized electronics are discharged by the sun, they form solar wind.

The earth’s magnetic field is there to protect us, and when the electrons are redirected by it, the process leads to the atmospheric light show we know as the Northern Lights.

The stronger the solar winds, the more substantial the energy is that hits the magnetic field. And more energy means a brighter light show.

Scientists have identified an 11-year cycle of solar activity, and during peak season, the lights may be visible in areas where they typically aren’t. This includes Kentucky.

Why aren’t the northern lights as visible in Kentucky as other places like Alaska?

Alaska is located in the northern area, which is close to where the Northern Lights show takes place. People living in areas close to the Aurora Zone or the Arctic Circle can usually view the lights. High-latitude polar regions are the best places to see them, including Norway, Lapland, Sweden, and Canada.

Under certain conditions, such as clear skies or during strong solar storms, the light show is also visible in further regions.

What is the KP-Index, and how does that relate to seeing the northern lights in Kentucky? 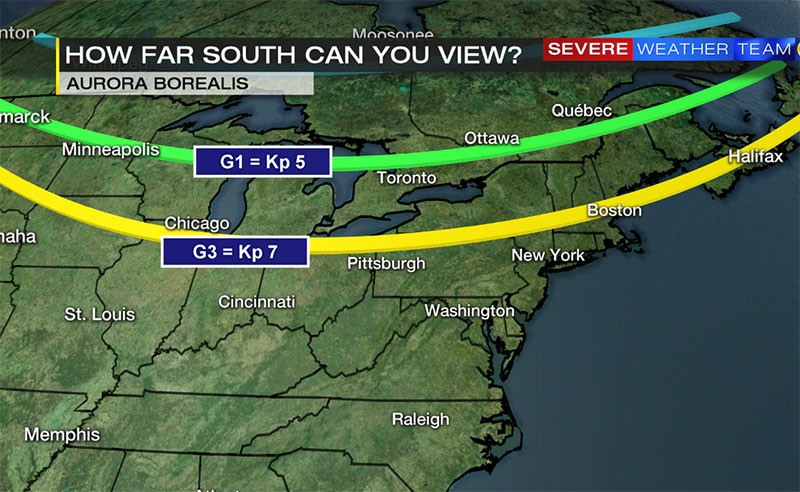 The KP-Index is used to record solar winds and the amount of energy that is being transferred from the winds to earth. It’s used by researchers who track and study the aurora.

At present, the index allows people to predict which places the aurora may appear in 2022. It was introduced in 1949 by J.Bartels to track ‘solar particle radiation and disturbances in our earth’s magnetic field.

We can use the KP-Index to view when solar activity peaks enough for the Northern Lights to be visible in Kentucky. The higher the Index number, the stronger the storm, and the more likely it can be viewed from a greater distance.

However, it is not easy to predict the storms with total accuracy, and the event can usually only be viewed with a 30-minute warning. For these reasons, a system of alerts has been set up for watchers who are serious about viewing it.

The 5 Best Places To See The Northern Lights In Kentucky 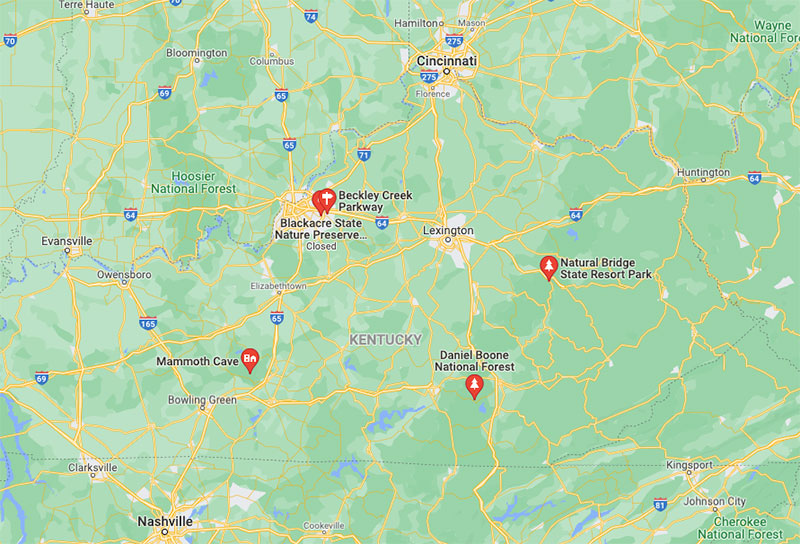 Spotting the Northern Lights in Kentucky is rare, but there are some places that increase your chances of viewing them.

Situated in Louisville, Kentucky, Beckley Creek Park is a park within an urban area. It services the community in different ways, offering wedding and function halls, picnic areas, fishing, and trails for those who enjoy walks. A farmer’s market is also a regular feature.

With a 22-acre egg lawn, it offers wide-open spaces and clear views of the sky during the day and at night. It’s also open till 10 pm and used by the local Astronomical society to stargaze, making it a promising site for increasing your chances of spotting the Northern Lights in Kentucky.

Blackacre is a historic pioneer homestead, dating back to around 200 years when Kentucky became an American State. The home is steeped in history and links back to the American Civil War.

It covers about 175 acres of land and is conserved as a nature preserve, with a large community garden.

Because of how beautiful the area is, students often go on field trips to explore about 300 acres of natural beauty and miles of walking tracks.

The preserve is easily accessible and open every day, increasing your chances of spotting the Northern Lights. However, its opening times are from sunrise to sunset, which is somewhat restrictive.

The forest was originally called Cumberland National Forest, but was renamed in 1966 after the famous American hero and frontiersman, Daniel Boone, by President Lyndon Johnson.

The forest is a good place to view the Northern Lights because you can arrange to stay overnight, either by RV camping or hiring a cabin.

This 52,830 acres park has been declared a UNESCO World Heritage Site and International Biosphere Reserve, thanks to its rich biodiversity and centuries of human history.

The Mammoth Cave National Park comes with hills, valleys, the Green River and tributary, and the Mammoth–Flint Ridge Cave System. The Mammoth-Flint system is the earth’s longest known cave system.

More recently, in 2021, the park was recognized as an International Dark Sky Park by the International Dark-Sky Association. This means the local community has committed to making it easier to view the sky at night, from the national park.

This commitment to protecting dark skies involves working to limit the impact of light pollution. Thus, the Mammoth Cave National Park’s clear skies and the night-sky program makes it a great spot for viewing the Northern Lights show.

The National Bridge State Resort is named after the geological rock formation where it is located. The sandstone arch took millions of years to form, and measures around 75 feet long and 65 feet high.

It is popular for climbers, and has trails for hikers. You can also explore the resort via a skylift which takes visitors over the forest.

The resort is known for water-based activities like fishing, canoeing and swimming, and there’s also a designated picnic area. You can choose to stay at a lodge or in a cabin, or even set up on the campsite.

In 2002 the National Bridges National Monument became the first International Dark Sky Park. Stargazing day and night is allowed in any part of the park, making it an excellent option for viewing the Northern Lights.

If you’re hoping to see the Northern Lights in Kentucky, here are some tips to help you out.

Choosing a good spot is critical to increasing your chances of viewing the Northern Lights. You need to have a clear, unrestricted, wide view of the sky.

It’s also important to choose a site that is safe from artificial light, to limit interference and obstruction.

Your site should also allow access in both the evening and at night, because the best time to view the lights show is between 9:30 pm and 1 am.

The Northern Lights are visible from late August to April, so the location you choose should also be accessible during these months.

The tip-off comes from a solar flare near the center of the sun’s disk, or a coronal mass ejection aimed at the earth. These indications give you a minimum 30-minute warning to get ready for the light show.

You can stay up to date on the Northern Lights by joining a website that notifies you about any developments, and monitors the KP Index and forecasts.

Tip 4 – Get ready to capture the moment

The Northern Lights are a remarkable phenomenon, so if you’re going to see them, you might want to capture the moment. If you want to record the display, make sure your camera settings are optimized and consider using a tripod.

If you’re interested in viewing the Northern Lights from Kentucky, it’s important to wait for a year with clear skies and strong solar winds. A solar wind that scores over seven on the KP Index indicates a good chance of viewing the light show.

The Northern Lights are typically seen up to 35 degrees latitude, and since Kentucky is up at 37 degrees, the chances are usually slim. But it’s not impossible.

So if you’re set on viewing the Northern Lights from Kentucky, plan ahead, keep an eye on the forecasts, and good luck!