San Francisco holds the glory as the Bay Area city, but it’s actually only one metropolis in the area. Across the bay from this legendary city sits Oakland: a city large enough that it has its own international airport.

Home to many San Fran commuters, Oakland itself has plenty to offer in the way of arts, culture, and sports. However, louder than the crowds at the Oakland Coliseum are the jarring crime stats.

Statistically speaking, Oakland is not the safest city to visit. In 2021, Oakland had a violent crime rate of 1,505.91 per 100,000 people. Oakland’s crime rate is nearly 4 times greater than the national average. 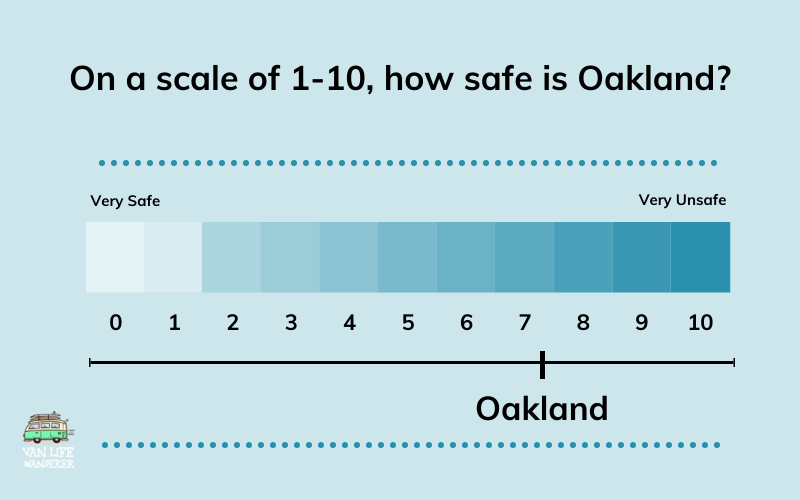 Here’s a graph showing you how Oakland’s crime rate compares to other major U.S. cities. 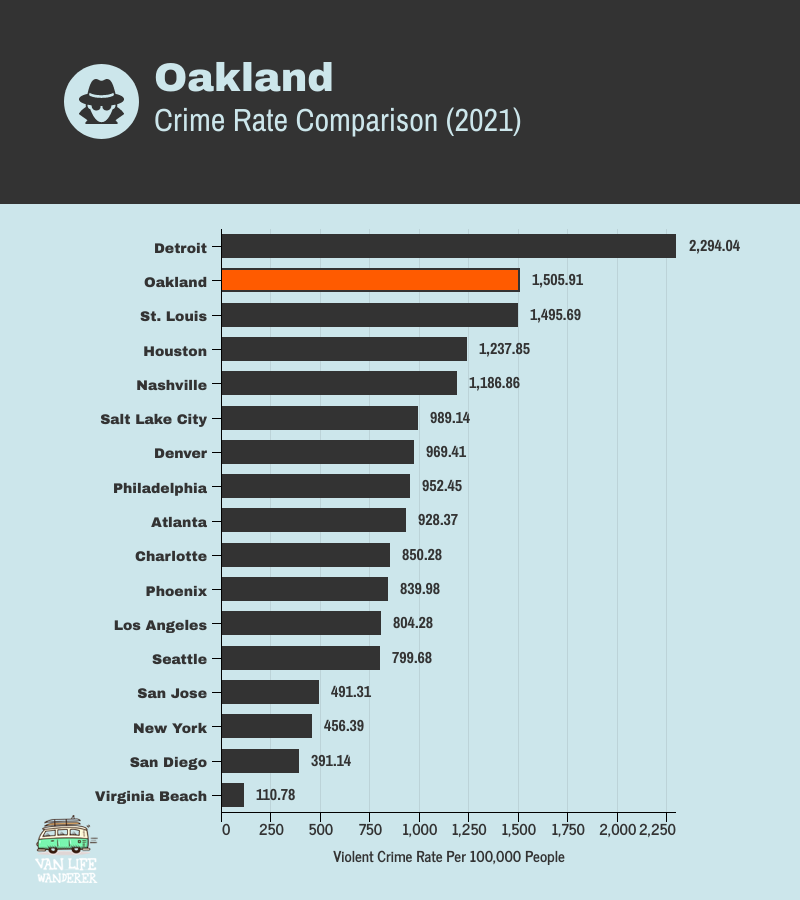 Here’s a graph showing you how Oakland’s crime rate compares the most dangerous cities in the U.S. 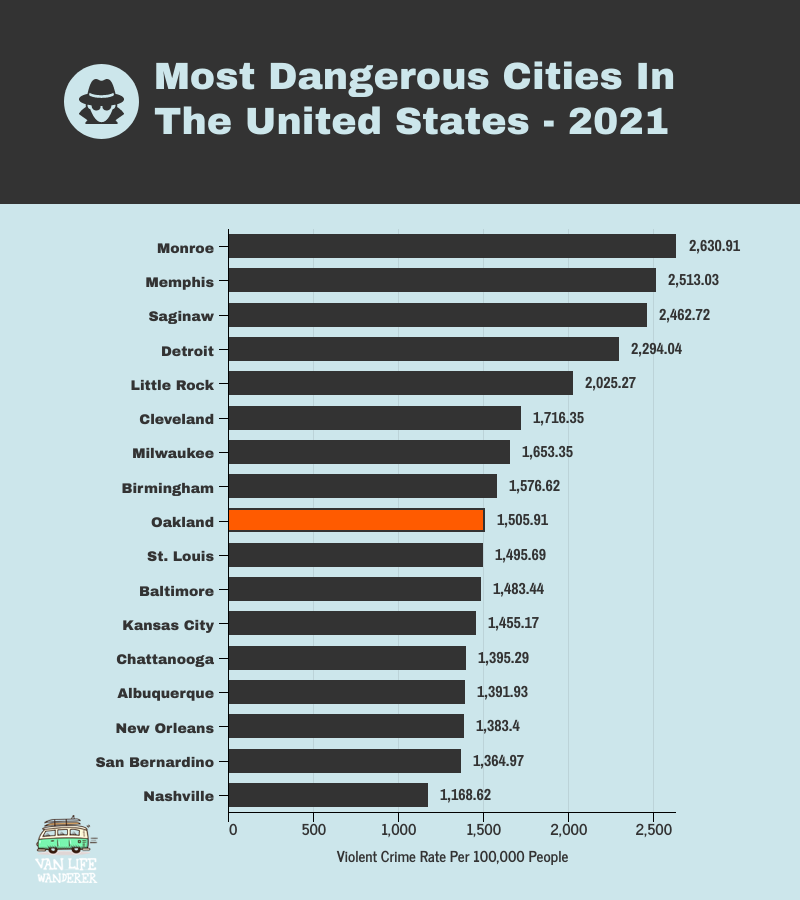 Here’s a graph showing you how violent crime has trended in Oakland over a 12 year period. 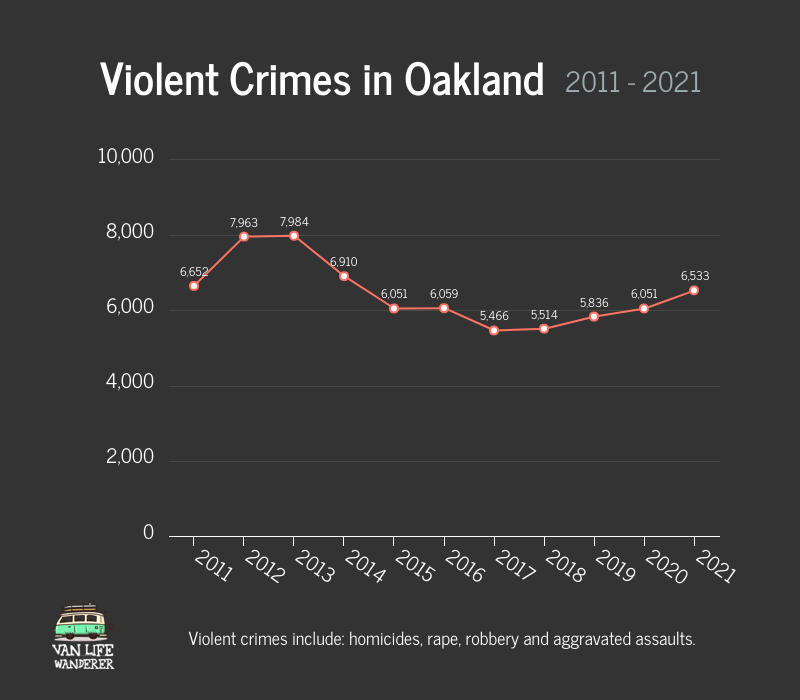 Here’s a graph showing you how murders has trended in Oakland over a 12 year period. 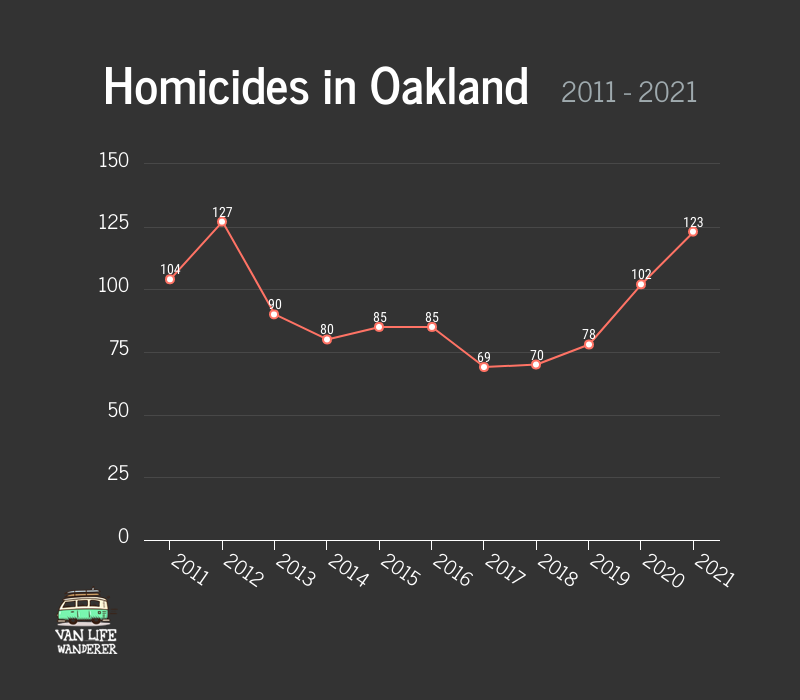 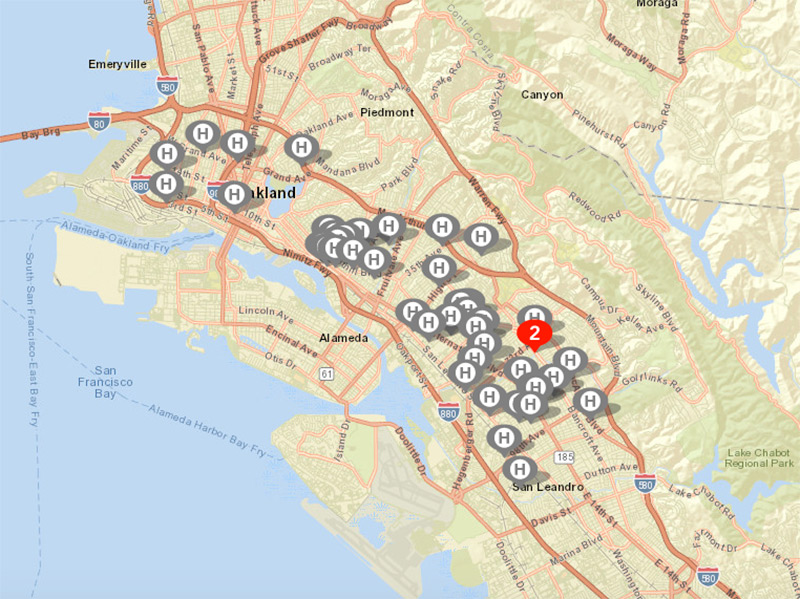 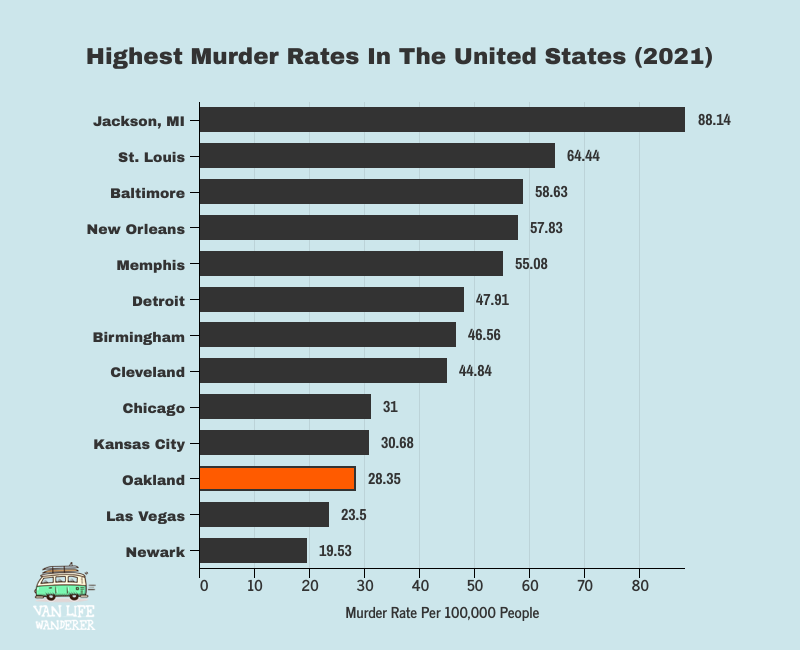 Here’s a graph showing you how property crime has trended in Oakland over a 12 year period. 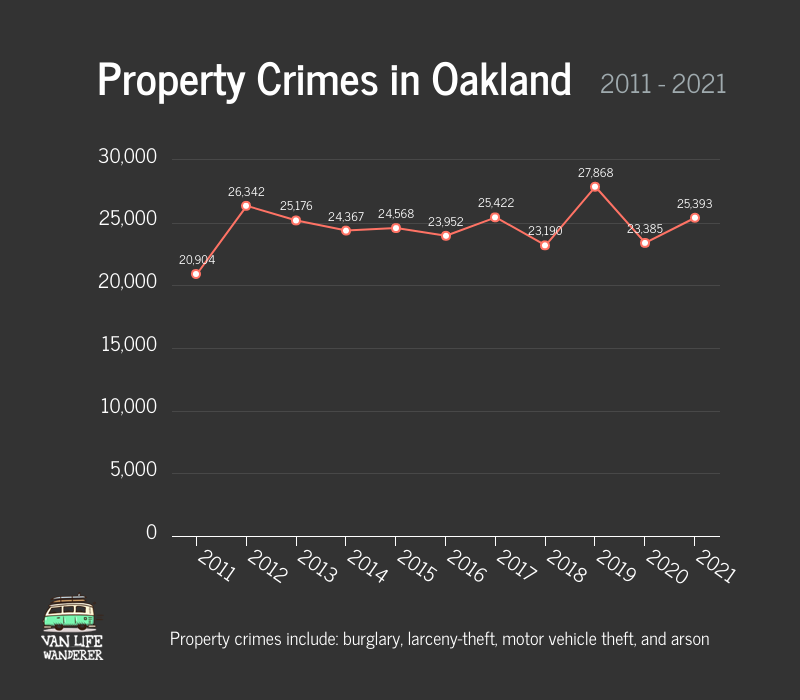 You may have noticed that Downtown Oakland is not on our list of most dangerous neighborhoods in Oakland – a reassuring thought. Therefore, if you’re visiting the city for a short period of time, or want to book a place there when visiting San Francisco, you shouldn’t hesitate.

There are great bars and restaurants in the area, with lots of tourists and locals regularly out and about. That being said, many do recommend ordering a taxi or ride share to get home at night.

When you’re unfamiliar with an area, it’s best to get from door to door safely rather than end up accidentally wandering into unsavory neighborhoods.

Residents of Oakland say that you should stay clear of going too far west of Downtown, as you will find yourself in one the most crime ridden areas.

One specific place to watch out for that local highlight is the Coliseum area: if you go to attend a game, don’t hang around the area much longer at night.

If you want to stay out after the event, move on to other areas for post-game celebrations (or commiserations).

What do Residents of Oakland say about its safety

Is Oakland safe at night?

Without a doubt, there are certain neighborhoods you do not want to be out at night in – especially some of the ones listed above.

As with most cities, the general consensus is that the more people that are out at night in certain areas, the more likely you are to be safe.

This goes for Jack London Square, Downtown, and Uptown – the more touristy areas.

The issue you’d be most likely to face here is pick pocketing, common in touristy areas. Simply don’t carry your phone in your back pocket and you’re already more likely to hold on to all your belongings.

If you’re visiting Oakland it’s unlikely you’ll be out too late. If you make it to closing time at the bar we salute you, but just remember that alcohol and unfamiliar settings don’t mix well.

Chase a night out with a taxi and you’re more likely to be safe than walking home.

With many colleges and universities in the area, as well as young professionals starting out, there are many men and women who live alone in the city without fearing for their everyday existence.

Oakland can be a safe place to visit alone as long as you keep your wits about you and learn the layout of the city.

While nobody dissuades women from visiting Oakland alone, many caution them on their travels especially at night.

There is no doubts about it, Oakland has a crime problem. Year after year, it ranks high on the most dangerous cities in the United States list. However this does not mean that you will be robbed, stabbed or shot if you set foot in Oakland.

If you learn the layout of the city, stay out of the bad areas, stay cautious of your surrounding and apply common sense you can mitigate your chances of being a victim and have a relatively safe visit.