If you are thinking about visiting Key West and have some qualms about the safety of the city, we got you covered.

We are going to deep dive into the statistics, look at some maps, graphs and talk to the residents of the city to give you a better understanding of how safe Key West really is.

Statistically speaking, Key West, Florida is a safe place to visit. In 2020, Key West had a violent crime rate of 400.85 per 100,000 people, which sits near the state and national average. It’s violent crime rate is on par with cities like Austin, El Paso and San Jose. 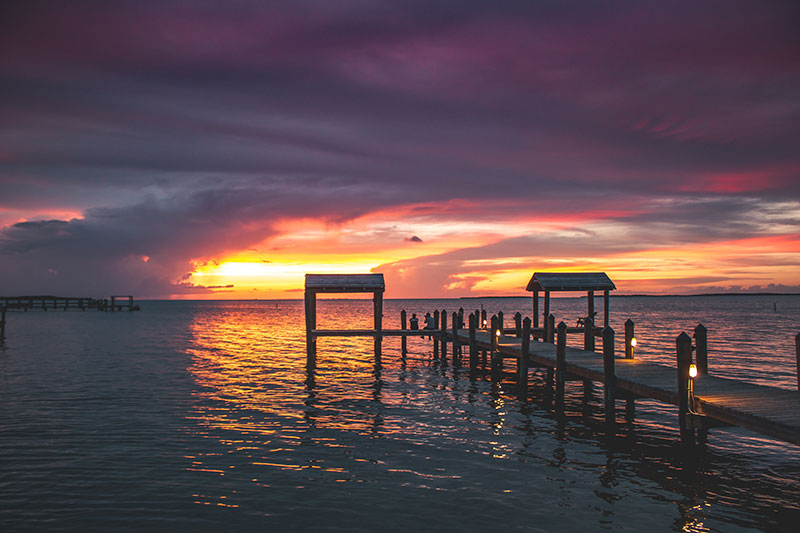 Here’s a map showing you how violent crime has trended in Key West over a 30 year period. 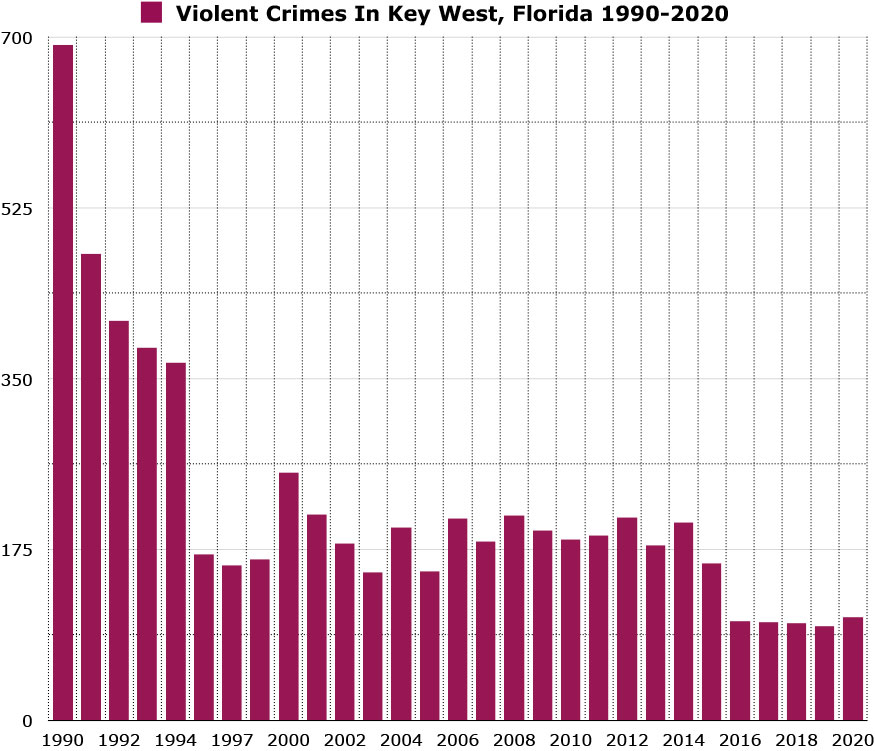 Here’s a map showing you how property crime has trended in Key West over a 30 year period. 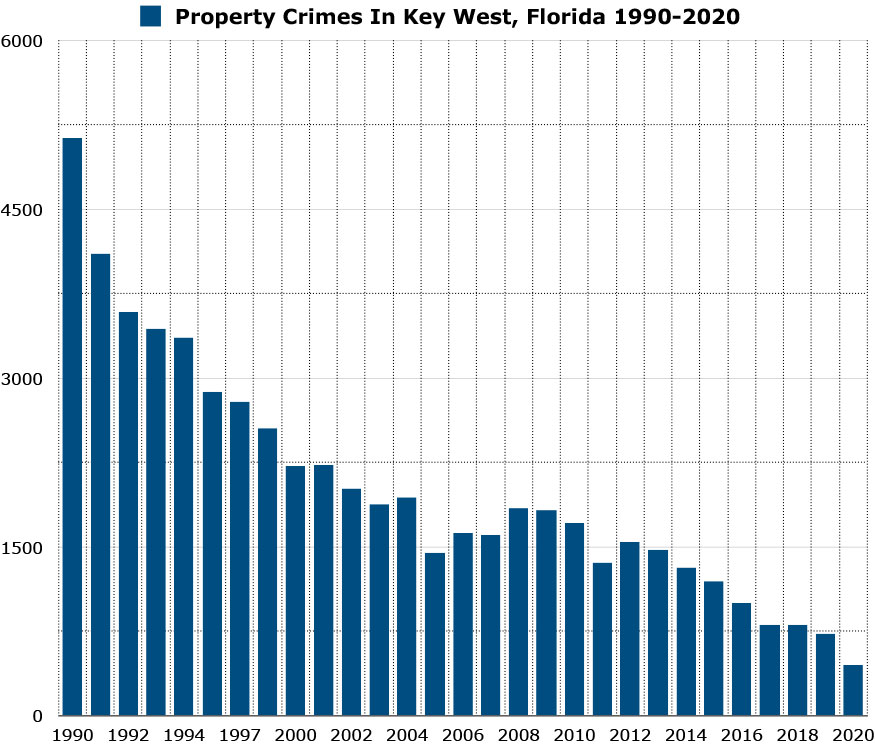 Key West vs The Rest Of Florida 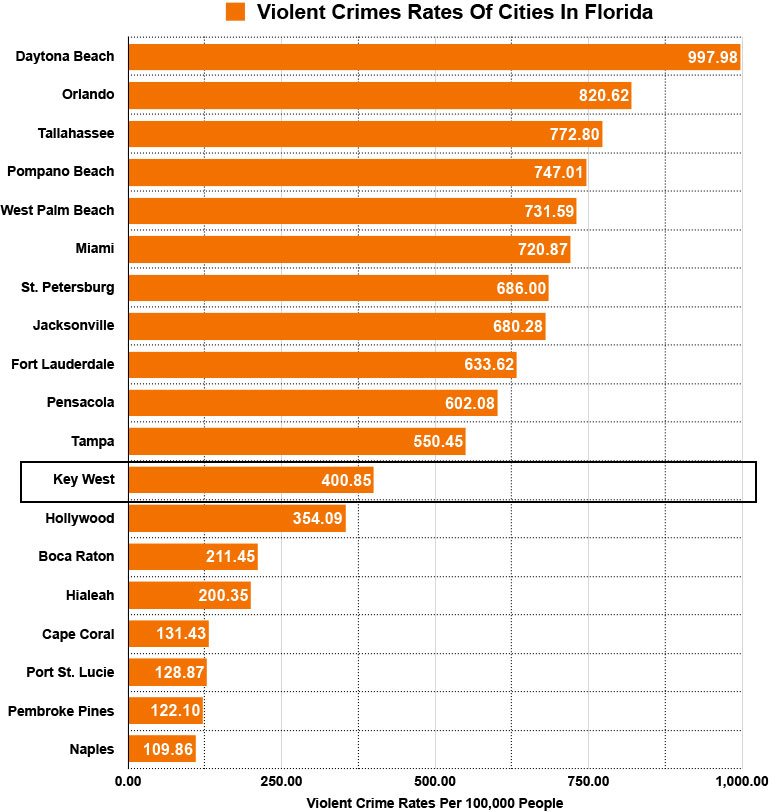 (Related: The Safest Cities In Florida)

Key West, Florida vs The Most Dangerous Cities in the United States 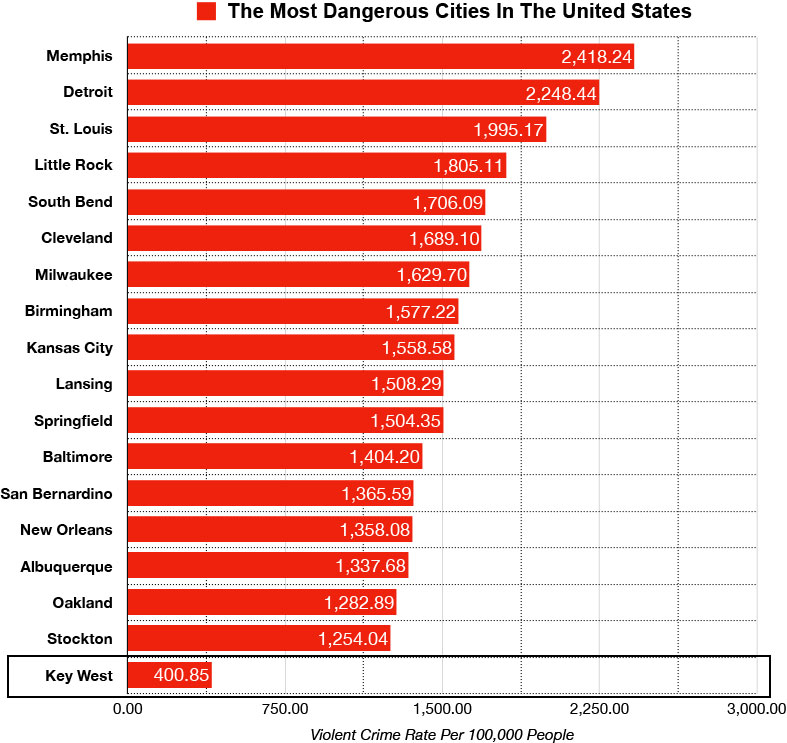 Are There Any Bad Neighborhoods In Key West, Florida?

There isn’t really any bad neighborhoods in Key West. Key West is a very peaceful and safe community where violent crime is relatively low. 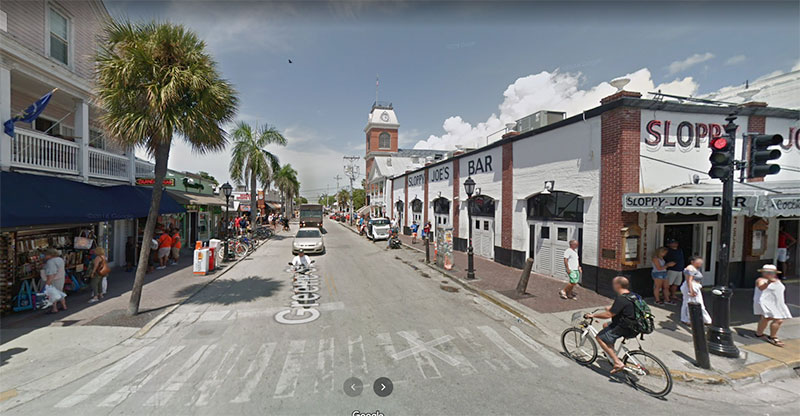 Duval Street is the closet thing to Downtown Key West and is safe to visit during the day and night. Its has a similar vibe to Bourbon St. in New Orleans with tons of shops, restaurants and bars and it is one of the top tourist attractions in the city.

The biggest thing you probably need to worry about is disorderly drunk people and pick pockets. Avoid confrontations with drunk people and keep an eye on your belongings and you should be fine.

What do residents of Key West say about it’s safety?

Is Key West Safe For Women?

While there are no guarantees, Key West is generally safe for female solo travelers.

The tap water in Key West, Florida is safe to drink. The biggest concern with tap water is immediately after a hurricane, which can disrupt the flow of clean water.

While the tap water in Key West meets the EPA health guidelines, it can still contain contaminants present in trace amounts that could potentially cause health issues over the long-run.

If you have any concerns about the tap water in Key West, we suggest that you use bottle water for your drinking needs.

Is Key West Safe From Hurricanes?

Key West is not safe from hurricanes and is actually very susceptible to them, due to its coastal location on the southern tip of Florida.

Since 1871, 25 hurricanes have passed within 75 nautical miles of Key West and 15 of those have been major hurricanes.

In 2017, Hurricane Irma touched down on Key West. It forced a mandatory evacuation of all residents and visitors of Monroe County. It destroyed or badly damaged 4,000 homes and more than 1,800 boats.

When is hurricane season in Key West?

Is it safe to visit Key West during hurricane season?

Are There Alligators In Key West?

Alligators are a rare sighting in Key West, which lacks river, canals, ponds and lakes that alligators like to dwell in.

Crocodiles are also a rare sighting and many residents say they have never seen an alligator or crocodile in their many years of living in Key West.

How Dangerous Is Key West?

Key West is not dangerous at all and is a relatively safe city. It’s violent crime rate is on par with the national average and the state average.