Atlanta is the unofficial capital of the south. It boast a rich history and culture and offers great food, museums, great live music and tons of attractions, no wonder 35 million people flock to the city every year.

If you are thinking about visiting Atlanta and have qualms about the safety of the city, we got you covered. We deep dived into the statistics, crime reports and talked to the residents of the city to give you a better understanding of how safe the safe the city really is.

Is Atlanta Safe To Visit?

Statistically speaking, Atlanta is a moderately safe place to visit. In 2021, Atlanta had a violent crime rate of 697.62 per 100,000 people. It’s violent crime rate is 1.75x greater than the national average and is on par with cities like San Antonio, Sacramento and Boston.

Here’s a scale to give you some perspective on Atlanta’s violent crime rate:

*All data is from the Atlanta Police Department

Here’s a map showing you the locations of all the 158 homicides that occurred in 2021: 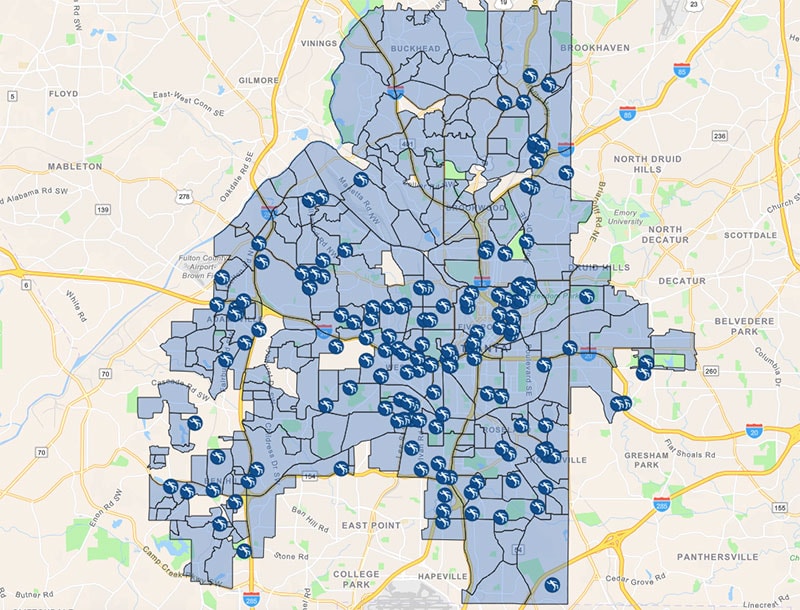 Atlanta vs The Most Dangerous Cities In The United States 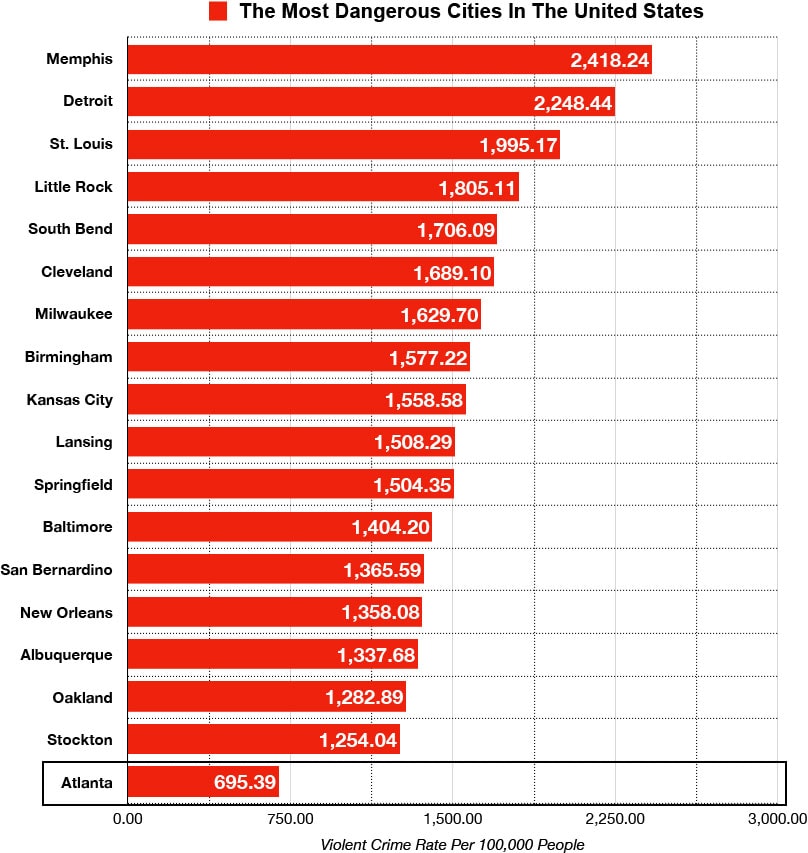 The Most Dangerous Neighborhoods in Atlanta

Here’s a map showing you the worst neighborhoods that you should avoid while visiting Atlanta: 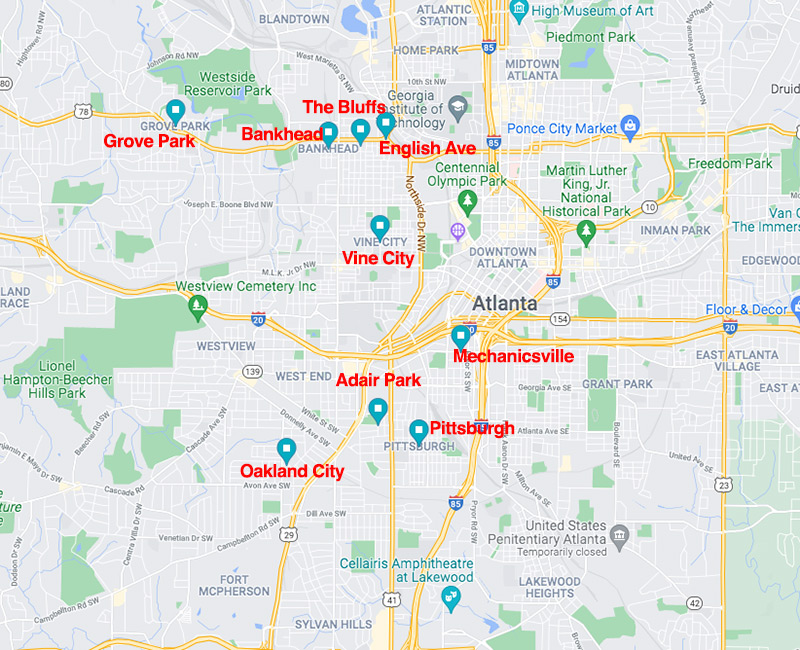 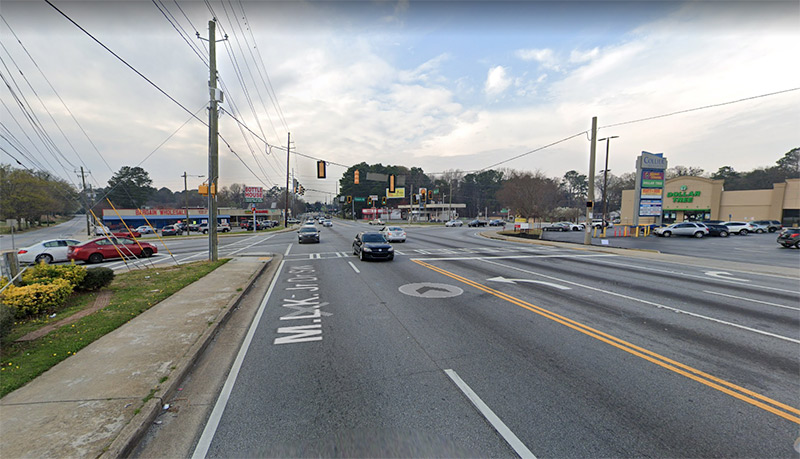 Bankhead is a neighborhood located west of downtown Atlanta, Georgia. 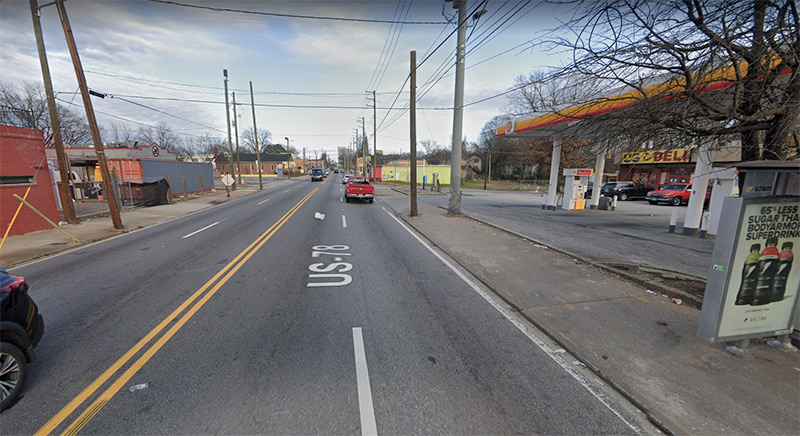 The Bluffs is a neighborhood in north west Atlanta and just west of Georgia Tech. It is notorious for high crime rates and illegal drug activity. There is even a found footage-style drama film called ‘Snow on Tha Bluff‘, which captures the grittiness of the area perfectly. 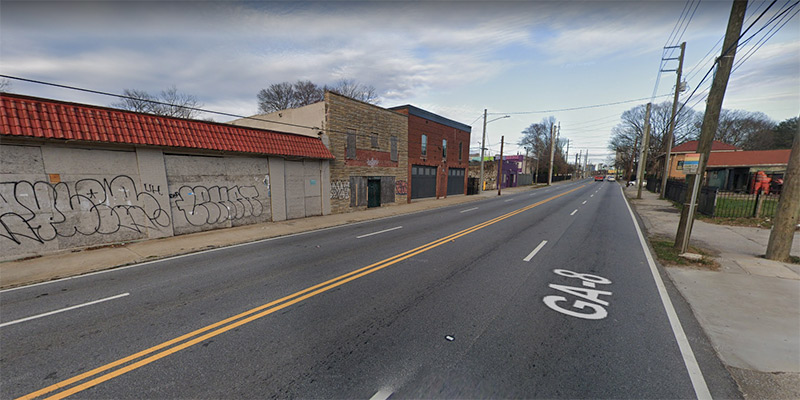 Mechanicsville is a neighborhood that sits just south of downtown Atlanta. 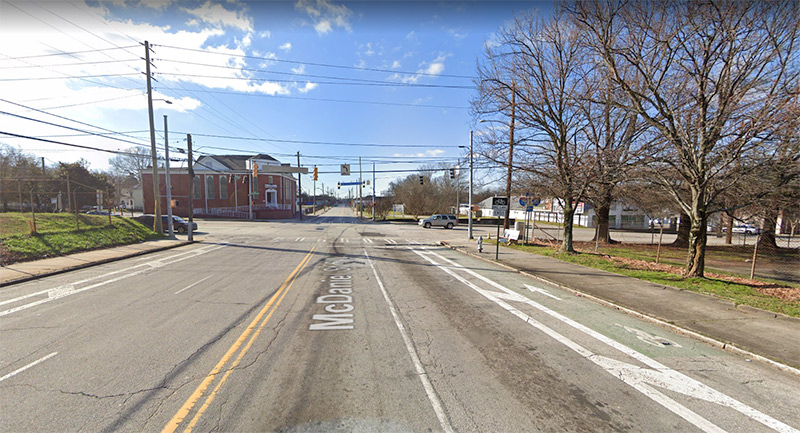 Pittsburgh is located in south Atlanta and was named Pittsburgh because of the industrial area’s steel mill reminded one of Pittsburgh, Pennsylvania 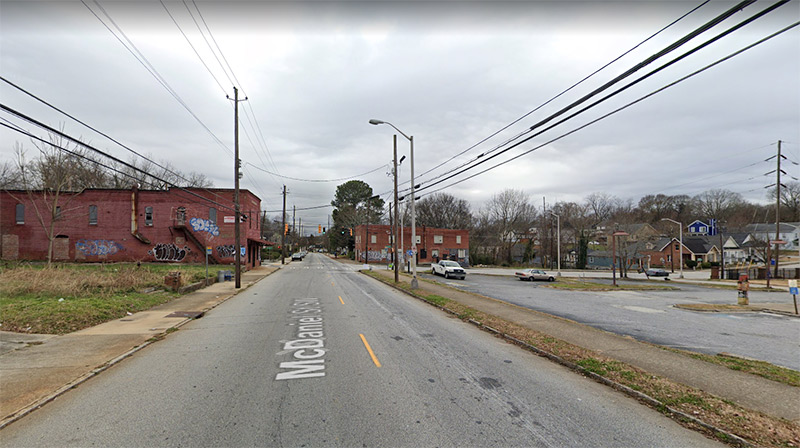 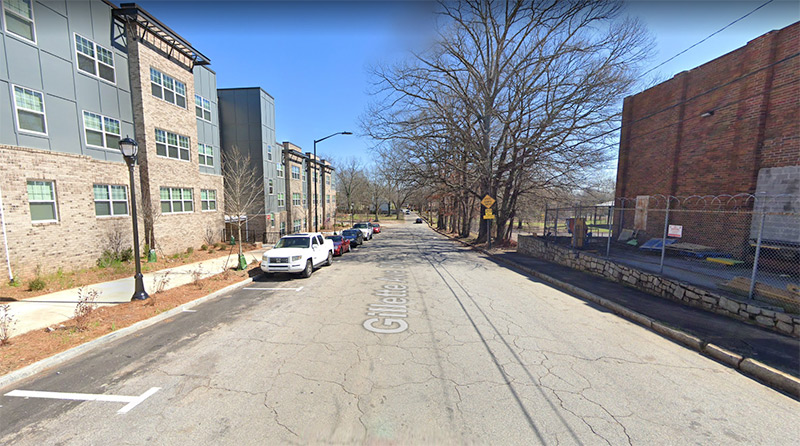 Grove Park is a neighborhood located in north west Atlanta 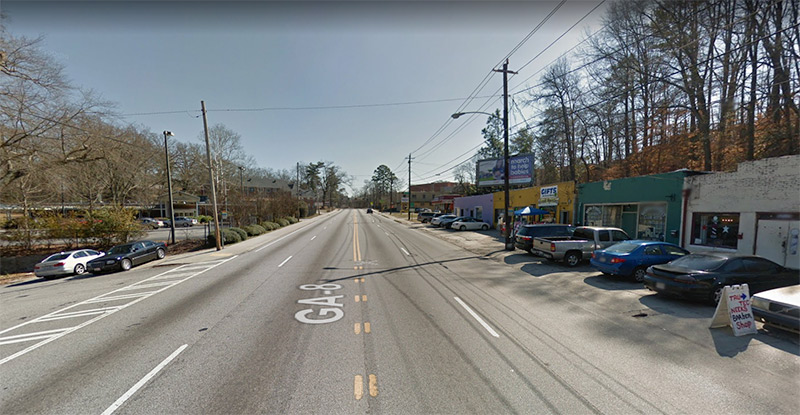 Oakland City is a neighborhood located in south west Atlanta. 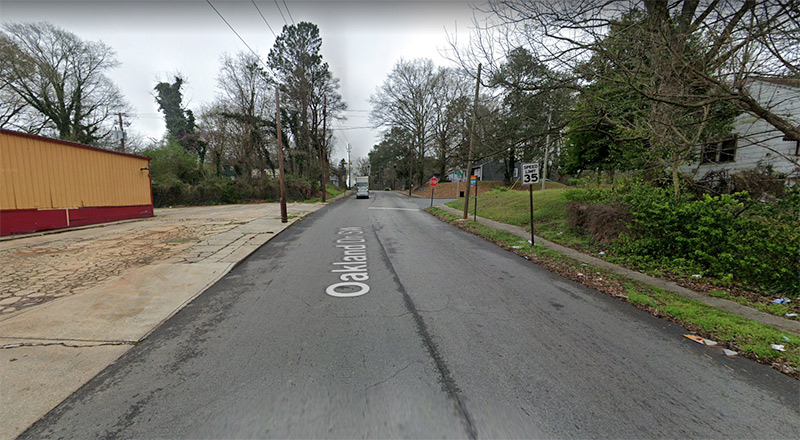 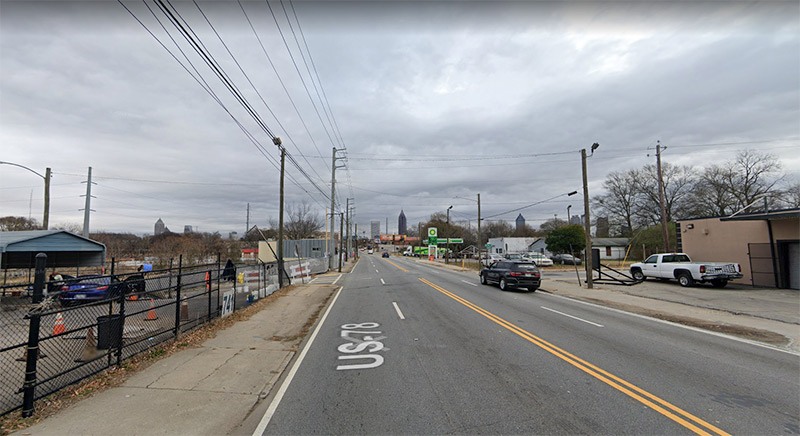 Vine City is a neighborhood located east of downtown Atlanta. 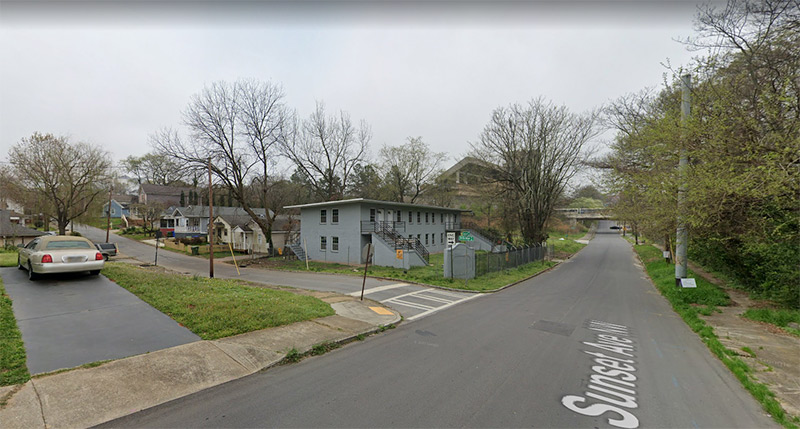 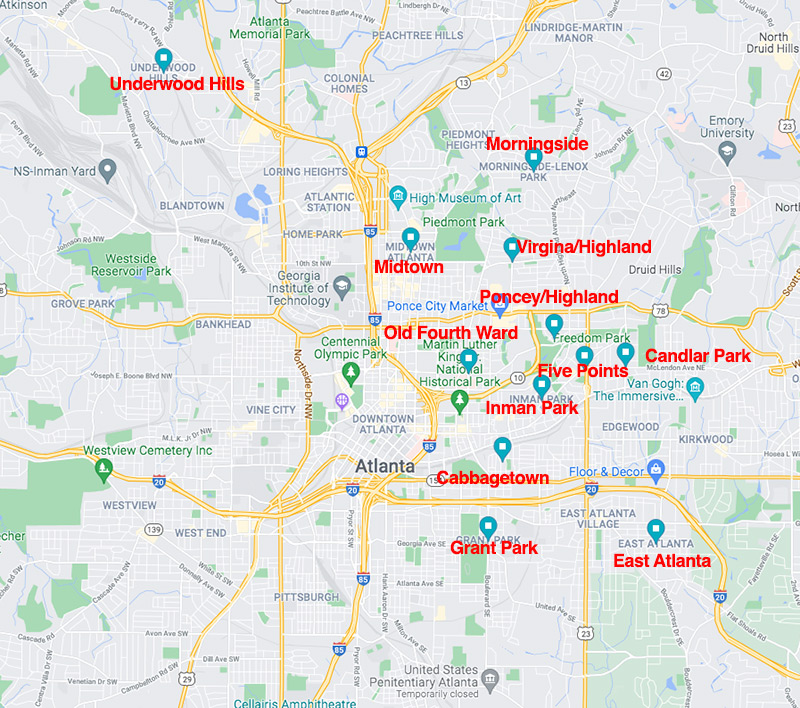 Downtown Atlanta is generally safe to visit during the day time, however we do not recommend that you walk around downtown at night. It is not well populated and there is not much to do. Many residents of the city say it is dead after dark and has poor food, nightlife, and shopping options.

If you find yourself in downtown and need assistance or aren’t comfortable walking back to your car or hotel, you can always call an Atlanta Ambassador to help you. They can accompany you back to a safe location, provide medical assistance, or help you find your destination.

A better alternative to downtown, is midtown, which is safer, more livelier and have way better restaurants and bars.

Here are a few additional thoughts from residents regarding the downtown and midtown area:

Is the public transportation of Atlanta safe?

MARTA is the primary public transportation provider in Atlanta and consists of subways, buses and streetcar. MARTA is as safe as any other major metropolitan city public transit, however statistically speaking, south of the city would be the least safe portion and north would be safer.

Most residents generally agree that MARTA is a pretty safe option for getting around in the city. However many residents agree that taking MARTA at night can get a little sketchy.

Since you are visiting probably not familiar with the layout of the city, we do not recommend that you take MARTA late at night. We recommend you take a cab or use Uber or Lyft.

What do residents of Atlanta say about its safety

Is Atlanta safe at night?

Atlanta is only safe at night if you are in the right area. There are areas of Atlanta where you shouldn’t even think of going at night, namely the neighborhoods mentioned above. These are the most dangerous areas and even long time residents have qualms about going there at night.

Atlanta can be a safe place to travel alone as long as you know the layout of the city and know which areas to avoid. Atlanta is just like any other city and there are risks involved when you’re in a big town by yourself.

Research the areas in Atlanta that you want to visit and use Google Maps street view to see if the areas is sketchy.

Tips to stay safe in Atlanta