Going out west is a huge travel goal for so many travelers. From the amazing cities to the towering mountains and some of the biggest trees in the world, there’s nothing surprising about people finding themselves enamored with the beauty.

But what many people miss out on as they fly from hotspot to hotspot are the small towns, the golden nuggets hidden amongst the hills and valleys of the west.

Towns that may not seem like much from above, but when you slow down and get out of the car to really see what’s around you, you find places like Searchlight, Nevada. 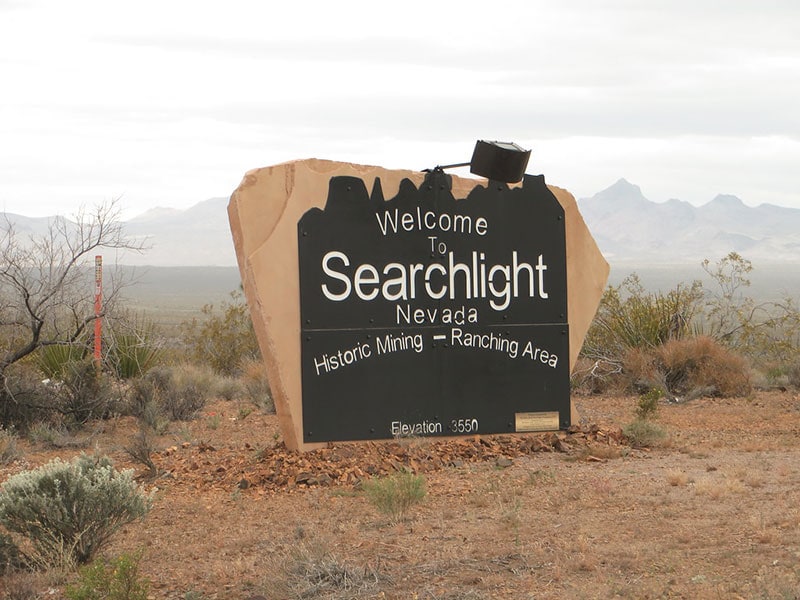 Searchlight, Nevada is a 13.1 square mile area in Clark County, Nevada. It was founded in 1897 by G.F Colton when he discovered gold buried within its hills, resulting in his starting the Duplex Mine.

Just one year later the town had a post office and the Searchlight Mining District was established. Soon enough the area was flooded with miners and by 1902 it had the largest population in its area with 1,500 people calling Searchlight home, and this number grew to

5,000 in 1907. That would be its peak year for population, though. Eventually, the quality and quantity of the gold in the area declined and when the jobs dried out, so did the town.

Saloons closed their doors, people abandoned their houses, and Searchlight became a ghost town of the west with only about 50 people remaining in 1927.

How did Searchlight get its name?

This is a lot of debate regarding how Searchlight got its unique branding. Rumors span everything from matches to the lamps that used to guide prospective patrons to the brothels of the area.

The realistic option is much less racey. Most agree that the name comes from the founder himself, G.F. Colton who made the statement “it would take a searchlight to find gold ore there.” Ironic, of course, being that he did indeed end up finding gold.

Where is exactly is Searchlight ?

Searchlight is located in the southwest corner of the state of Nevada in Clark County, Nevada. Its geographic coordinates are 35.4653° N, 114.9197° W. As previously mentioned, the entire town is just 12.1 square miles, and it’s sandwiched between two large mountains.

How far is it from major cities?

Since Searchlight is so small, you may want to know what other places you could go. The good news is that major cities aren’t far away. Las Vegas is only 58.3 miles north of the town and would take less than an hour to drive to–56 minutes to be exact.

Overall, there are many cities that are just a short day trip away!

How many people live in Searchlight, Nevada? 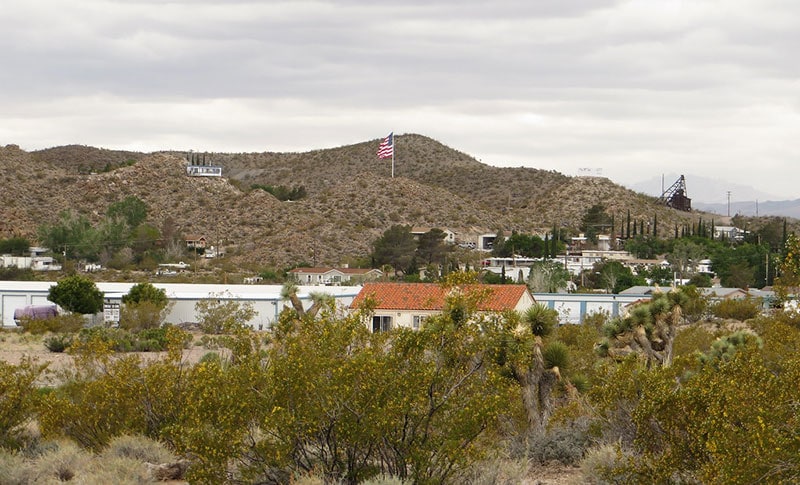 The city of Searchlight is an unincorporated town, which means it is a region that is not governed by a local municipal corporation. Essentially, this means it still has a very low population, and according to 2019 Census data, it currently has 318 people residing in it.

What is Searchlight, Nevada known for?

Searchlight is most famous for its old mines and its haunted feel. Travelers through the town can revel in the wild, wild western feel as they explore abandoned mine entrances, saloons, and deserted streets. You might even see a tumbleweed or two.

What is there to do in Searchlight, Nevada?

Searchlight, despite its small square mileage, still has a lot to offer visitors! The following are some of the best things to do if you decide to take a trip to this historical town. 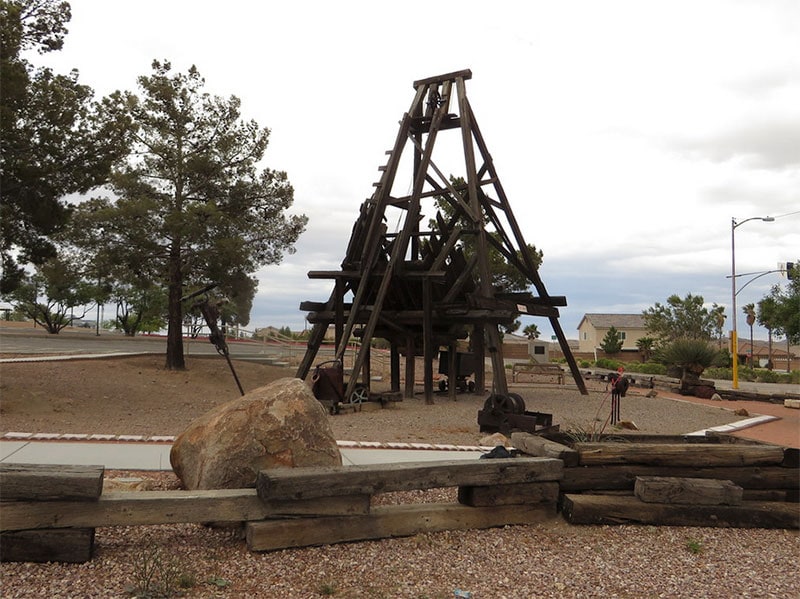 The first stop on your trip should be to the Searchlight Historic Museum, open Monday through Thursday, 9am-2pm.

Visitors who start here can take full advantage of the history they learn about throughout the rest of their visit. It’s the best way to ensure you get the most out of your time in Searchlight.

When you go to the museum, you should make sure to check out the old mining maps.

Afterward, you can read up about the railroads and how the town has been preserved throughout the years since it was nearly abandoned.

You know what they say: If you give a mouse a muffin… well, if you go to a museum, chances are you’ll want to take a little piece of history home with you.

You may not be able to take home the exhibit, but if you take a little drive across town you can find your own piece of history at Searchlight Treasures Thrift Store.

The gold ores may have run dry, but any thrifter knows you can find treasure anywhere if you just look hard enough. This treasure will even have its proceeds donated to several non-profit organizations. 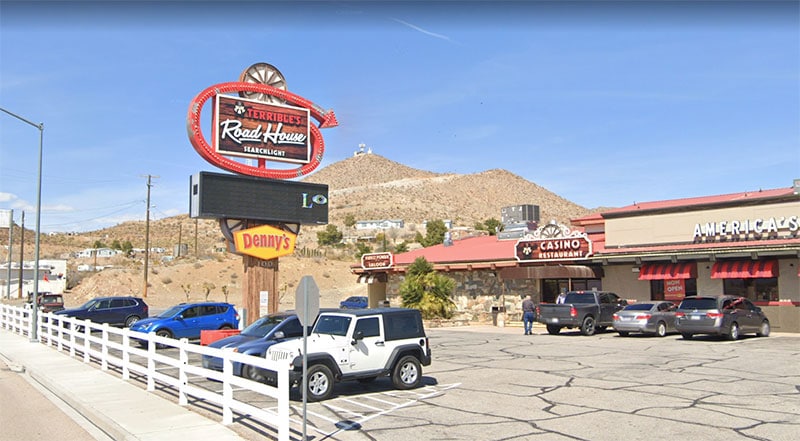 Alright, enough of the history and onto what Nevada is famous for: casinos! You don’t have to go all the way to Vegas to get some gambling in.

Searchlight is home to Terrible’s Roadhouse and Terrible’s Casino. Hop on over to the Road House for some sustenance and dancing or a round of pool before clamoring into the Casino.

As always, know when to hold ‘em, and know when to fold ‘em (aka: gamble responsibly), but most importantly, have fun!

With 65 slot machines in the Casino and 57 in the Road House, you’re sure to find one you like. 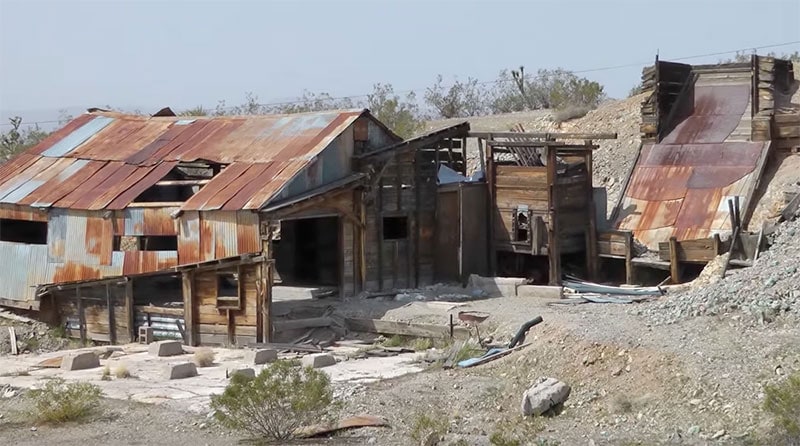 The Southern Nevada Mine is a historic mine that was used for gold, copper, lead, silver, and zinc.

With so much of the structure still intact, it’s no wonder that it’s such a major attraction for history buffs and mining intrigues alike.

Just a short walk from the main road, the mine is very fun to explore on the outside. As a precaution, visitors are absolutely not allowed to go underground or into the mine whatsoever.

It’s not stable, and could become deadly. So look from above as much as you’d like, but don’t go in! Walking Box Ranch was once owned by Rex Bell and his Hollywood-famous wife, Clara Bow in 1931 and was a fully operational cattle ranch.

It was later sold to Viceroy Gold Corporation in 1989 for the purpose of access to their mines and as an executive retreat for the company.

Since then it has been sold multiple times before becoming a national historic landmark for its significance to cattle ranching history, the Mojave, and its architecture. Currently visitors are not permitted inside, but they are welcome to walk its perimeter to admire its architecture. 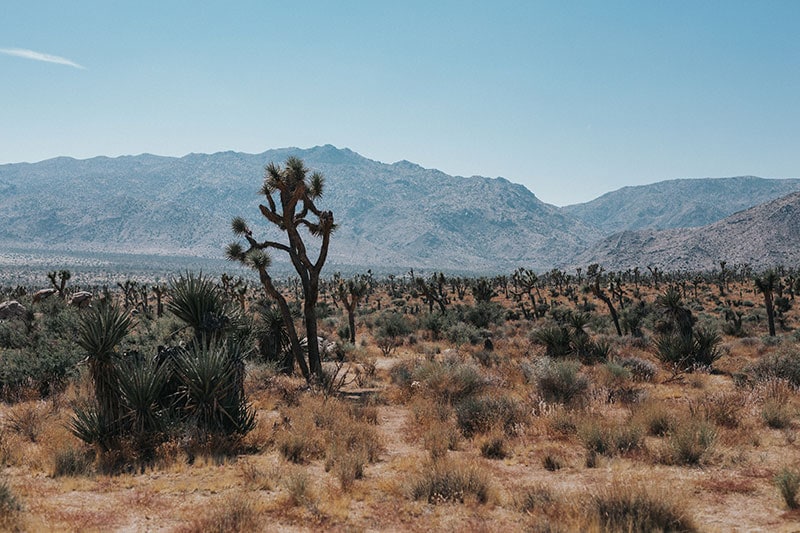 The Joshua Tree Highway (or US Route 93) is one for the books. These unique trees, named after the Mormon leader Joshua, are actually related to agave and yucca.

Around Milepost 162, drivers will start to notice funny looking trees that seem to pop up from sandy nothingness.

These trees will grow in numbers the further south you travel. These unique, Dr. Seuss-esque trees can only be found in the Mojave desert, and they can only grow between elevations of 2,000 and 6,000 feet.

Make sure you pull over to snap a picture! 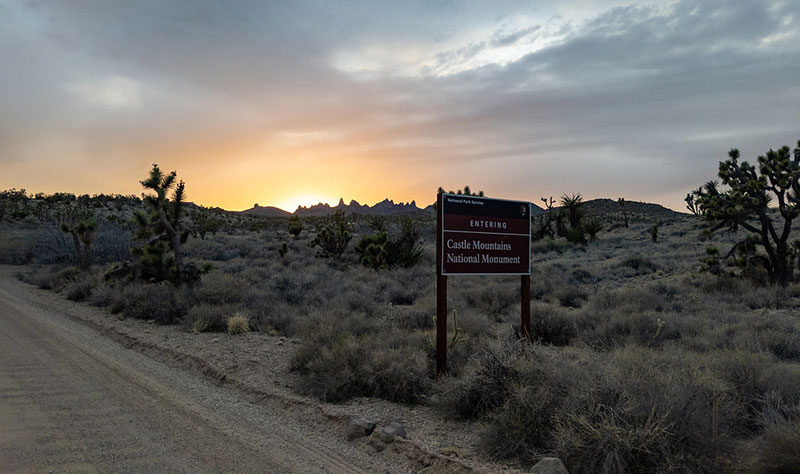 Last but certainly not least, when in Searchlight, Nevada you must go to the Castle Mountains National Monument.

21,000 acres of untouched California-Nevada wilderness is at your fingertips when you cross into this park.

From Joshua Trees to stunning mountain views, Mother Nature is sure to impress you with her beauty.

This is a great place to slow down, unwind, and breathe it all in.

If you go in the summer make sure you check out the Nation Park website to check on the wildflower patches as they bloom seasonally and you don’t want to miss it.