2013 seems to have been the year for beer in Columbus, Ohio, having given birth to several independently owned craft breweries in a mere 12 months.

While some were founded before and after this year, it certainly gave birth to the greater part of our list. Happily, they’ve all remained in business and keep producing delicious craft brews.

Regardless of when the brewery was founded, we compiled a list of the best breweries in Columbus, Ohio: 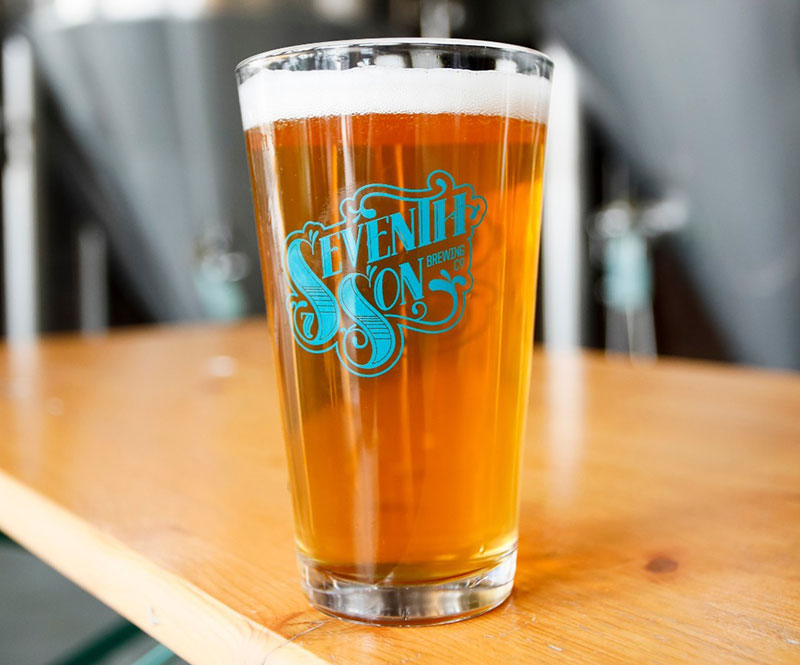 Seventh Son Brewing has been creating craft beers since 2013. They specialize in IPAs, but their flagship beers also include an oat brown ale, golden ale, and four hard seltzers.

In the nine years they’ve been making beer, they’ve made over 225 different brews. The brewery was started by a collective of childhood friends and has gone on to open a third branch. That’s right, Seventh Son was so successful, they went on to establish Antiques on High and Gateway Brewing.

You can find it in Columbus’ Italian Village where they serve both upstairs and downstairs on 26 different taps. Though some are doubles, there’s still plenty of choice!

You can enjoy their beers outside on the patio or, in the event of rain, relax in their very cool, stylish taproom. Can’t decide on a beer? Choose a flight and work your way through the list! 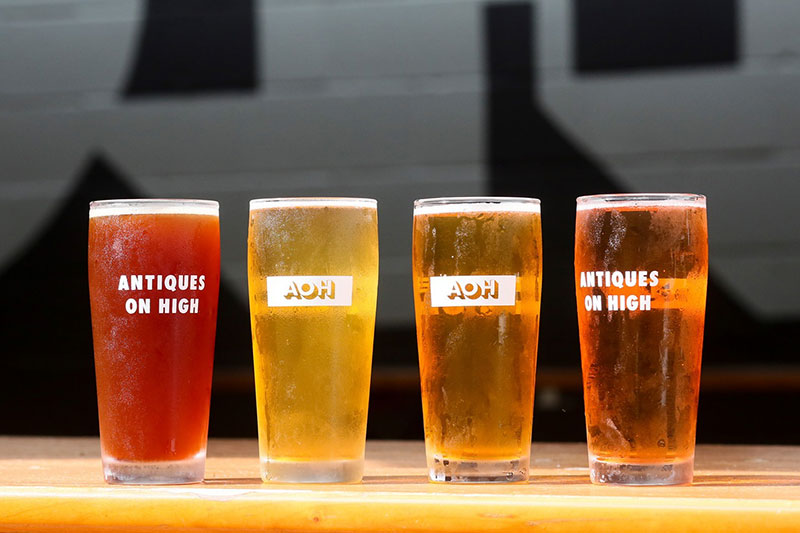 Sister to Seventh Son, Antiques on High (familiarly known as AOH) has an even more specific focus than its successful older sister.

AOH specializes in the fermentation of sour and wild beers. While they also make hazy, hop-forward IPAs, they’re known for their saisons, sour ales, weisses, and lacto-fermented beers.

Once you enjoy a tart, aged beer on their rooftop outside bar, you’ll understand where the name comes from.

You can pair your deliciously unique beer with some charcuterie.  They have a snack vending machine that goes beyond Lays, offering cured meats and fish, crackers, and cheeses to make a smorgasbord that satisfies everyone. 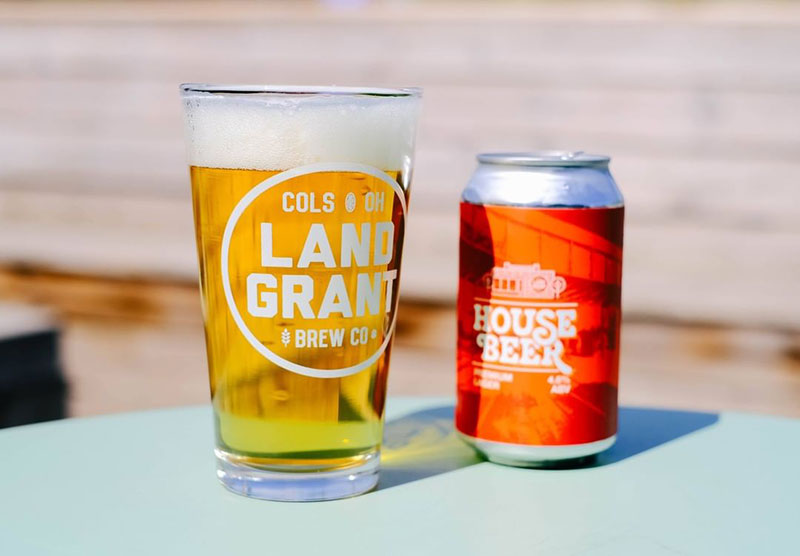 First to get into canning, Land Grant can trace its routes back to the early 20th century. Okay, their brew space goes back to 1920, but Land Grant had their grand opening in 2014.

Since then, they’ve found their way into the Columbus community, John Glenn International Airport, and the Ohio Stadium. Year ‘round, they offer a range of flavors, from IPAs to lagers to wheats to porters – literally all the flavors.

Once an elevator factory, you can now drink delicious brews in the historic building. Land Grant did a fair bit of reno when they took over the space, but their taproom and beer garden are still industrial, while also colorful and comfortable.

Don’t worry, they have food every day of the week: Monday to Wednesday is time for guest food trucks to mix things up. 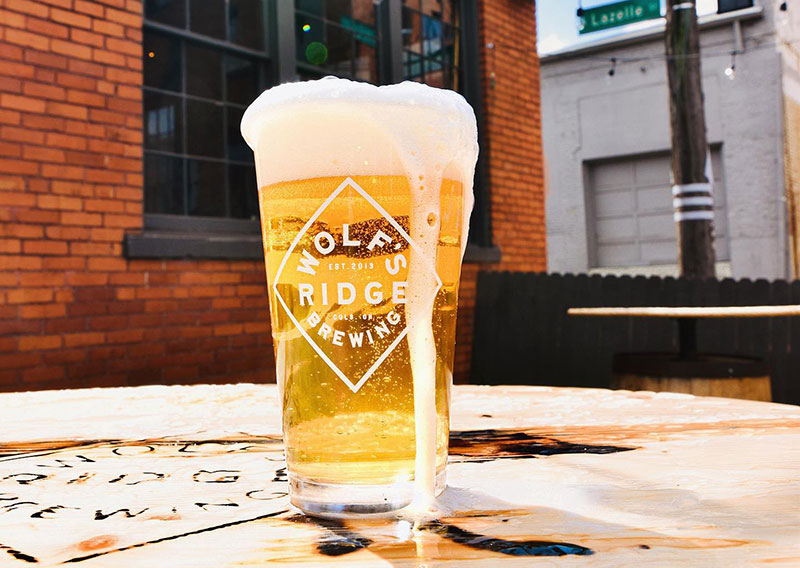 Wolf’s Ridge Brewing is a family-owned business. It’s a father-son venture, inspired by their desire to create a great craft brewery and a fine dining restaurant.

They take craft beer to a fancier level, creating an unforgettable experience outside the usual brewery taproom stereotype.

Their beers cover every category, including some off the beaten track, like their rauchbier smoked lager and their cream ale with pineapple, cherry, cinnamon, and vanilla.

If you’re keen to join the pack, you can indulge in their taproom or dining room. The former still offers brewery feels with exposed brick walls, but the latter should make your jaw drop with its mouthwatering creations.

It’s so fancy, they even offer a tasting menu, serving five fixed courses of their incredible cuisine. It’s okay if you don’t want to go all-out on dining while drinking Wolf’s Ridge; the taproom offers its own bar menu of less esoteric choices. 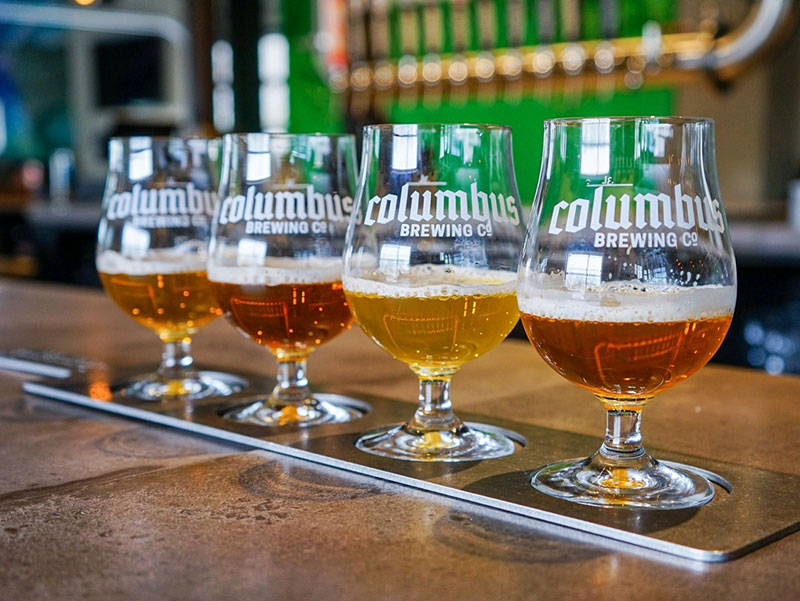 Namesake to the city, Columbus Brewing Company claims to be the roots of craft beer in Columbus, helping develop the heritage of the industry.

Their brews focus on American hops, being used in a range of lagers and IPAs. Columbus Brewing Co. also dips their toes in barrel-aged beers.

Visit their taproom where you can sip surrounded by a radical dragon mural, woven through with hop cones.

They also host regular events, some of which include brewery tours and community fundraisers.

And if you consider it an event, there are beer and pizza pairing nights, where the pros pair up margherita, pepperoni, and more with Columbus Brewing Co.’s brews. 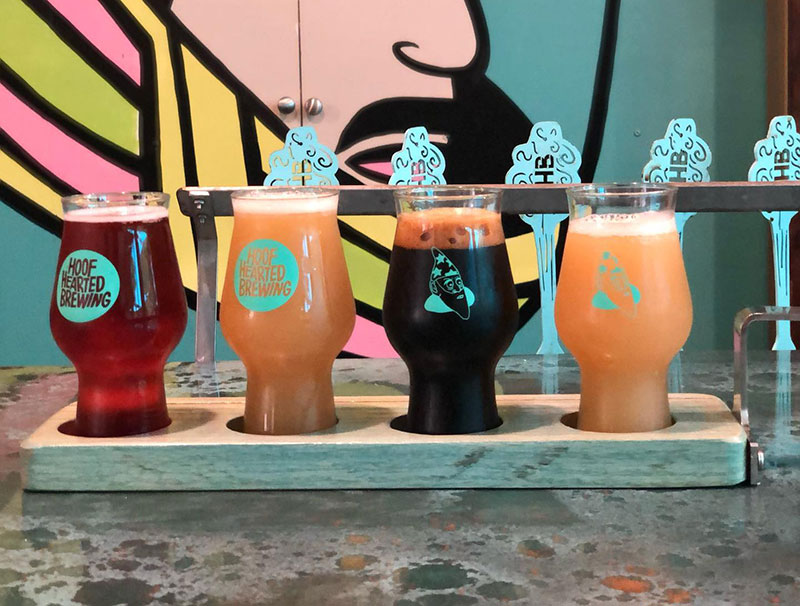 While many craft breweries try to go beyond the norm, Hoof Hearted Brewing really takes the cake on being bizarre.

Started in 2011, the brewery finds influence in pop culture, taking lots of inspiration for their beers from music, T.V., video games – even viral YouTube videos.

They like to live life out loud, with lots of color on their labels, flavor in their beers, and spunk in their personality.

While their business sense is nothing short of ridiculous, their taproom is surprisingly low key, allowing their crazy concoctions to speak for themselves.

The subtly designed space has small pops of color, but lets the windows looking out onto the brew deck be the main attraction. Work your way through their draft list with a flight and finish off with some grub from their in-house kitchen. 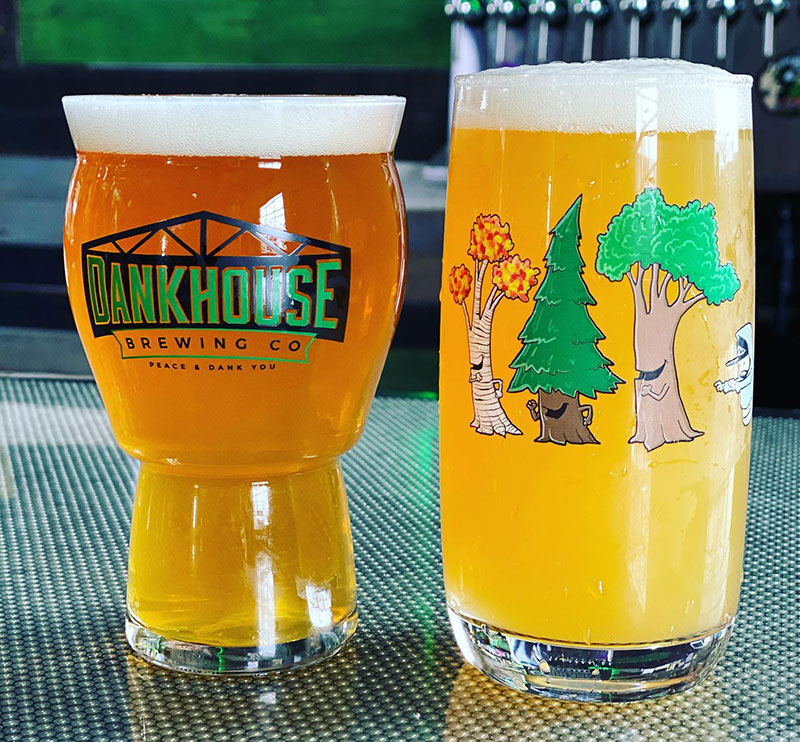 New kid on the block, DankHouse Brewing Co. is also micro compared to its neighbors. Since 2017, they’ve been brewing a mere 1/8th the amount of beer as some of the other Columbus breweries. It’s quality not quantity with DankHouse. Their small batches specialize in IPAs, stouts, and fruited kettle sours.

Their taproom aims to have an atmosphere as dope as the beers they brew. They serve their own beers on 16 taps behind a green-lit bar.

When the weather’s nice, you can enjoy their beers on their no-nonsense patio and pair their five-beer flight with food from their in-house kitchen.

Okay, it’s technically out-house as it’s a permanent food truck, but MNCHS serves delicious burgers, tacos, ramen, and more. Keep an eye on their event page, as they often have tap takeovers and live music. 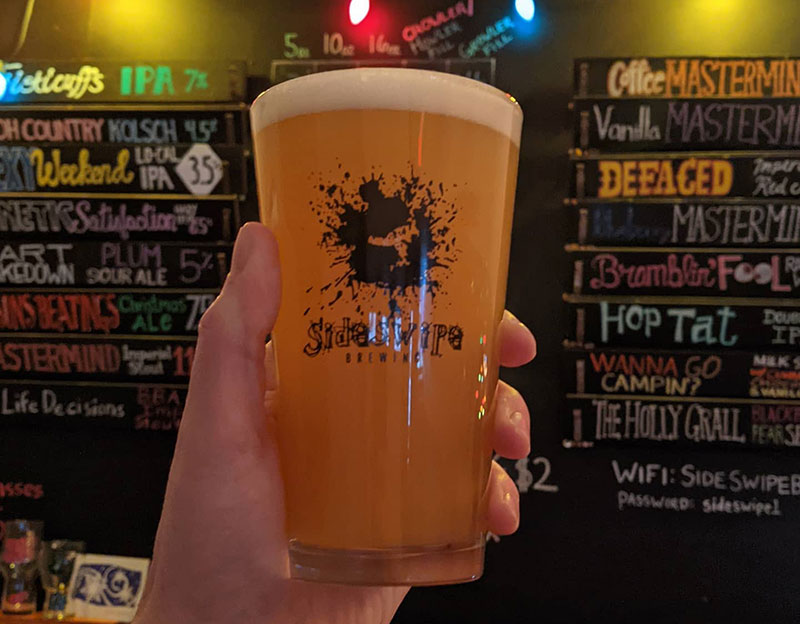 Another independent microbrewery crafting high-quality beers, Sideswipe Brewing Co. aims to produce the most kick-ass beers in the area. It’s no surprise, as their name comes from the martial arts move that knocks people off their feet: Sideswipe’s goal with each pint poured.

They tend to focus on IPAs, occasionally experimenting with unique flavors like their Hopelessly Awake coffee vanilla blonde ale or Cranky Badger, their rye English mild.

Up to the challenge? Visit Sideswipe’s self-proclaimed no-nonsense oasis. The taproom is in an industrial space with regular food truck pop-ups, but you can always call in a pizza from nearby.

If you haven’t been defeated by the thought of enjoying laid-back beers at the brewery, maybe you’ll surrender to their arcade – pinball machines line the walls of Sideswipe, bringing ‘80s fun and memories to this causal hangout. 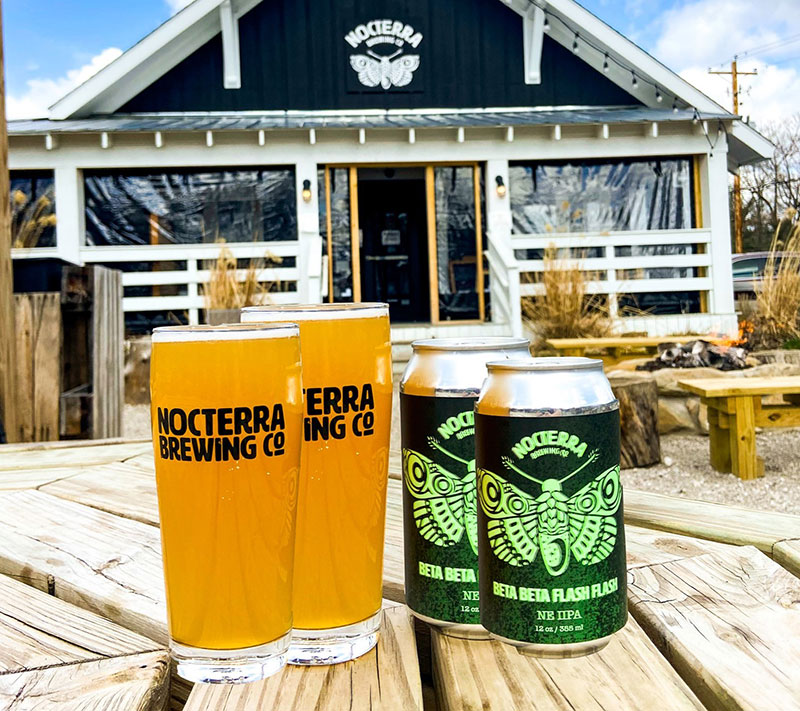 You can consider Nocterra Brewing Co. as a hidden gem for the Columbus brewery scene, mostly because it’s just north of Columbus, in downtown Powell.

It’s worth being part of the list because of the vastly different experience it offers. Nocterra is dedicated to the outdoors. They’re passionate about outdoor sports and activities, but also simply having a cold one out back. Visiting their taproom will give you that experience.

Visiting Nocterra will feel like hanging out in your own backyard. They have an expansive space inside, but it’s all about the wooden porch and fire pits.

Enjoying a beer here will feel like vacation. They offer a broad draft list at their taproom, serving up to 20 different beers and hard seltzers.

Plus, if you’re a fan of Ray Ray’s, you can follow them from Land Grant and pair their mouth-watering barbecue with Nocterra’s brews. 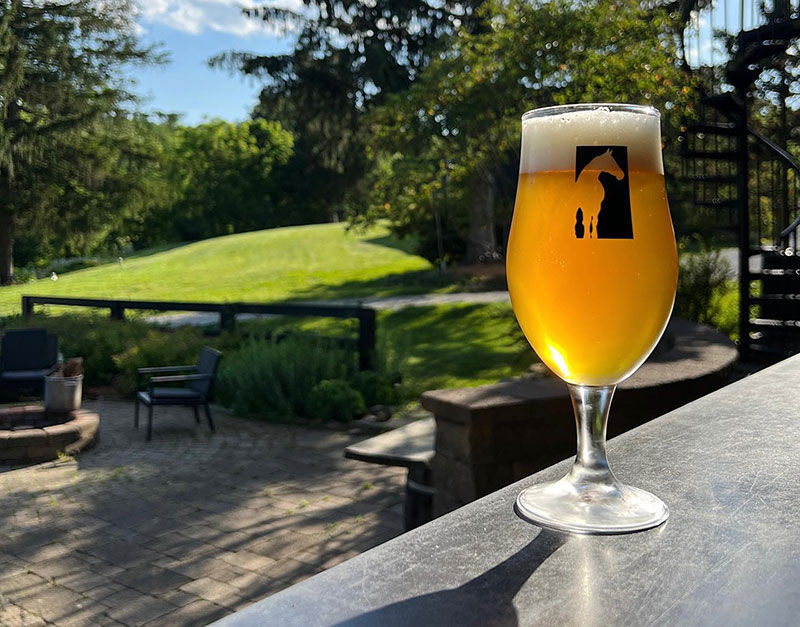 A local giant, Rockmill Brewery goes back to the area’s roots. The longest-running brewery on this list, they’ve been churning out craft beer since 2010, really leaning into the terroir of the area to use fresh Ohio water in an attempt to echo the pristine conditions of Belgian ale.

They go even further than that, calling a 19th century horse farm home to their brewery and tasting room. In a word, Rockmill is farmhouse.

Like Nocterra, Rockmill Brewery is outside of Columbus but worth the visit. You can utterly relax in their space that feels like a home away from home: curl up in front of their stone fireplace with a witbier or sip a saison at a large, farmhouse table under the gabled roof.

The brewery has regular events like live music and can be reserved for private events and weddings.